Media: the results of the British referendum inspired the separatists in Texas

July 1 2016
74
The results of the British Brexit inspired the Texas separatists who are fighting for the separation of the state from the United States, reports RIA News New York Times newspaper report. 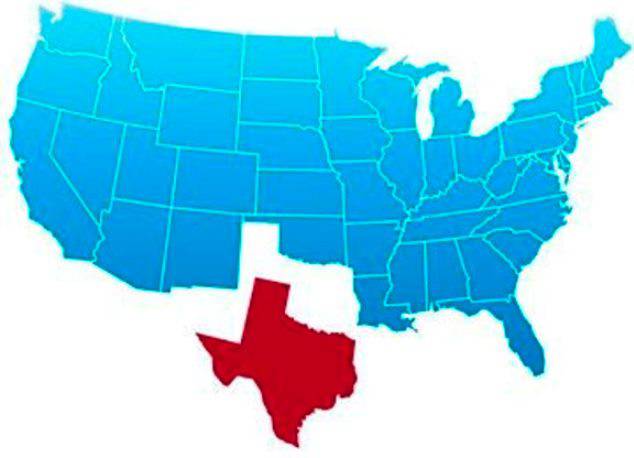 “The hashtag #Texit (by analogy with the British Brexit) began to actively spread on social networks. Twitter users are calling on Greg Abbott, the governor of the state, to take action, accompanying their messages with US maps without Texas, ”the newspaper writes.

The head of the "Texas Nationalist Movement" Daniel Miller said that "the initiative for the separation of staff support 250 thousands of people." He periodically (via Twitter) informs the governor about the readiness of the movement for a referendum.

“Good morning, Greg Abbott. We are ready to vote on #texit. What is the delay? "
writes Miller.

The publication reminds that in 1836-1845's. Texas was “an independent state separated from Mexico during the war of independence”, but “in 1845, the Republic of Texas voted to join the USA and became the 28 state.”

Ctrl Enter
Noticed oshЫbku Highlight text and press. Ctrl + Enter
We are
Results of the week. "Who you are lucky, in fact, and will carry a cock, and such a bird as you, I, too, will rush!"Results of the week. "Either true or all is well"
Military Reviewin Yandex News
Military Reviewin Google News
74 comments
Information
Dear reader, to leave comments on the publication, you must sign in.