In memory of Anatoly Klyan 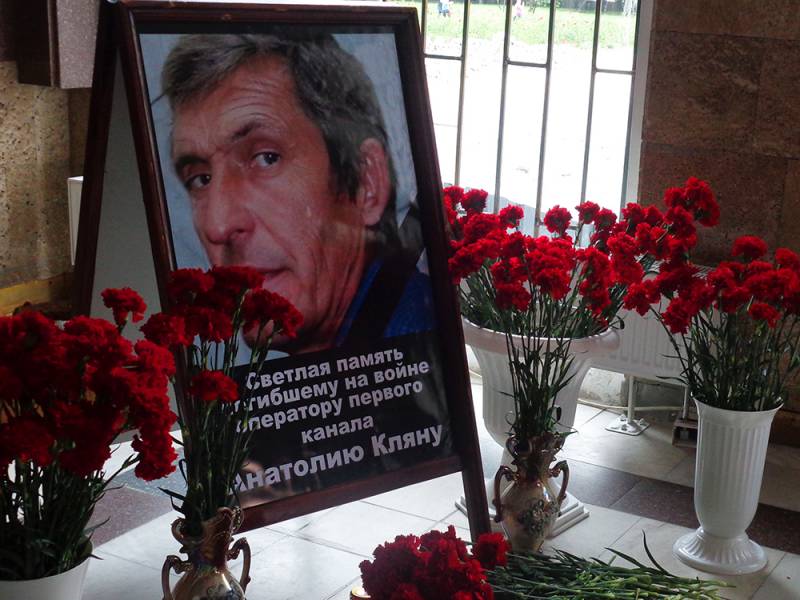 The truth about the struggle of the insurgent people of Donbass made its way painfully and painfully. At the first stages of the birth of Novorossia and its opposition to the Maidan revolutionaries, even the people of Russia, for the most part, did not understand what was going on (and even now not everyone understands). But getting to Western public opinion is an incredibly difficult task. After all, you have to compete with the huge industry of corrupt media in Washington and its European allies.

But nevertheless the truth grows like a flower through asphalt. And now in Russia, any normal person, not a liberal or a traitor, is well aware that the anti-Ukrainian Maidanian junta under the guise of an “antiterrorist operation” has unleashed a war against women and children of the DPR and LPR. And in the West, anyone who wants to hear an alternative opinion, different from what is slipped by the largest TV channels, has the opportunity to hear it. Suffice it to want and go beyond the imposed.

At the highest price, those whose task was to get the truth out of the fire and carry it to the people paid. In this war, Ukrainian punishers killed four famous Russian journalists - Igor Korneliuk, Anton Voloshin, Anatoly Klyan and Andrei Stenin. Their death played a huge role in the fact that the information blockade was broken.

From the very beginning of the coup d'état, organized in Kiev by the “dancers” from the Maidan, and most importantly - their overseas patrons, the persecution of Russian journalists began. They were stopped at the border, declared persona non grata, expelled from the territory of recently fraternal Ukraine. They were arrested, kept in cells, and interrogated. Employees of the TV channel “Life” Oleg Sidyakin and Marat Saychenko were tortured at all - they were beaten, they were put on black bags on their heads.

And then the “broad freedom fighters” started shooting journalists in the so-called “ATO zone” at all. I mean - on the territory of the insurgent Donbass.

Two years ago, 30 June 2014, the operator of the Russian First Channel Anatoly Klyan was killed. He became the third Russian journalist who fell in the Donbas. Before him, Igor Korneluk and Anton Voloshin, killed with the participation of the notorious Nadezhda Savchenko, paid for the truth with their lives. Unfortunately, the criminal did not suffer the deserved punishment.

On that summer day, Anatoly Klyan was on the bus, in which, besides him, there were other journalists. There were also ordinary women whose sons served in military unit No. 1428 near Avdeevka.

Women wanted to take their boys from the Ukrainian army. After all, the junta intended to send young soldiers to kill innocent civilians - their own neighbors, relatives, and friends.

But there were those who gave a merciless and criminal order: open fire on the bus. As a result, Anatoly Sergeyevich received a mortal wound, from which he soon died.

It is cynical that ukroSMI did not stand up to protect Russian colleagues, but tried to replicate the lie: as if Klyan was not killed, but died of a heart attack. They say the old was, the heart could not stand ... And nothing that this death - dozens of witnesses?

In the DPR, then the leadership reacted rather severely to those who organized this trip. The vice-speaker of the Supreme Council of the Republic, Vladimir Makovich, was arrested in this case. Fortunately, he was soon released. Because the murder should not be responsible for those who allowed journalists to do their work, but for those who opened fire.

The Investigative Committee of Russia opened a criminal case on the fact of the death of Anatoly. According to the assumption of some employees of the RF IC, the Ukrainian oligarch Igor Kolomoisky, who in those years did a lot to unleash a criminal war against Donbass, could be involved in this death.

Two years have passed since the day when Anatoly Klyan, who had passed many hot spots, gave his life for trying to extract a grain of truth. Like last year, a memorial event was held at the House of Government of the DPR. Colleagues brought flowers and candles to the portrait of a journalist.

The Ukrainian side continues to persecute journalists, moreover, not only from Russia, but also from other countries. When the list of press personnel accredited to the DPR was published on the Peacekeeper killer website, the Kiev authorities, for one, tried to counteract, but the fact of the matter was that it was only for the sake of appearance. "Crow does not pick out the crow of the eye." And many people from that list receive threats and insults. This is especially dangerous for Ukrainian journalists - at any time they can undergo anything. In the best case, the arrest, in the worst - to share the fate of Olesya Elder, Anatoly Klyan and others who were killed for the truth.