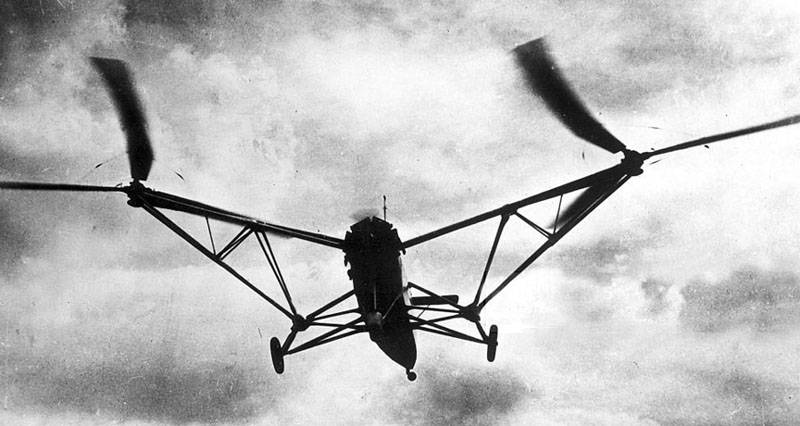 80 years ago, 26 June 1936, for the first time, the Fokke-Wulf FW-61 took to the air - the first helicopter in the world to be used in practice. It happened four years before the start of flight tests of the first successful Sikorsky helicopter, so everything is clear on the question of priorities. In 1937-38, FW-61 broke all previously established helicopter records. In particular, he rose to a height of 2640 meters, four times overlapping the result achieved by the Soviet TsAGI-1EA helicopter. The maximum speed was 122 km / h, and the maximum range was 230 km.

The machine achieved such impressive results with a low-power motor in just 160 horsepower, working through a sophisticated gear system on two bearing rotors mounted on truss consoles on the sides of the fuselage. There was another small propeller in the nose, but it served only to cool the engine, playing the role of a fan. Due to their relative bulkiness, helicopters of such an aerodynamic scheme were not widely used, however, the Mi-12 helicopter, the largest in the world, was built according to this scheme, and now it is used in convertiplanes.

The success of FW-61 prompted its developer, aircraft designer Heinrich Focke, to create a much larger machine capable of carrying a solid load. Such a machine, called the “Focke-Ahgelis” FA-223, for the first time took off 3 August 1940. The change of the index was due to the fact that in 1937, Fokke, together with Gerd Ahgelis, founded a new company in Delmenhorst, specializing exclusively in helicopters. It was the first helicopter building company in the world.

FA-223, equipped with a nine-cylinder star-shaped engine "Bramo-Fafnir" in 1000 hp, could carry in a closed cabin five passengers with luggage, or - as many paratroopers with weapons. In the transport version, its payload reached a ton. The speed was 180 km / h, the range with a load was 700 km, the ceiling was 4900 meters. Even for post-war helicopters such data looked quite decent, and in 1940, there was nowhere else in the world anything like that. For an impressive and slightly eerie appearance, the helicopter was called “Drache” - “Dragon”.

The command of the Luftwaffe was delighted with the flight characteristics of the FA-223. Already in 1941, the company signed a contract for the supply of 100 copies of the helicopter in military transport, search and rescue, and anti-submarine patrol variants, as well as in the version of a night bomber. To fulfill such an order, the company had to significantly expand production. By the summer of 1942, a new plant was built in Delmenhorst, immediately proceeding to the assembly of helicopters. However, a month later he was razed to the ground by British bombers. Together with the factory workshops, 13 of almost finished "Dragons" were destroyed.

Without losing heart, Fokke restored the company and in 1943 it managed to produce 18 cars. Their military tests were quite successful, so the order was increased to 400 copies. However next year aviation Allies again to the ground destroyed the workshop and several dozen helicopters on the assembly line. By that time, the Germans were no longer up to them, and therefore no funds were allocated for the restoration of the plant.

At the end of 1944, there were plans to start the production of FA-223 in the occupied Czech Republic. Production documentation, some components and several engines were sent to the Avia factory in Prague. But until the end of the war work there has not begun. But in the post-war period, the Czechs assembled two "Dragons" and introduced them into their Air Force under the designation VR-1. These were the first Czechoslovak helicopters.

“Dragons” performed well at the front, however, plans to use such a machine to evacuate Mussolini had to be abandoned due to technical problems. But one of the "Focke-Achgelis" in February-March 1945 of the year was used to communicate with Danzig, landing right on the streets of the city besieged by Soviet troops. In these raids through two front lines, he simultaneously set a world distance record for rotary-wing vehicles. To reduce the risk of air defense flights were carried out in the dark.

Due to their small numbers, German helicopters, of course, did not play a prominent role in the war. However, if it were not for the successful work of the Anglo-American bombers, the picture could have been a bit different. 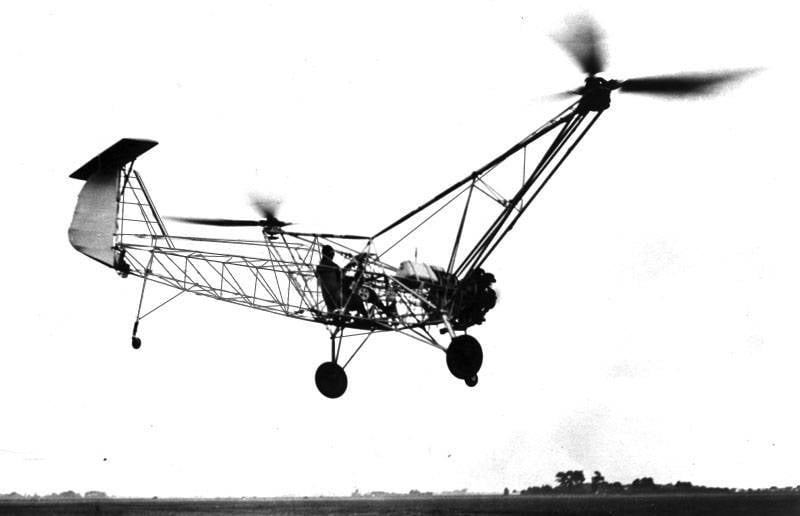 The first flight of the FA-61 made without the fuselage skin. 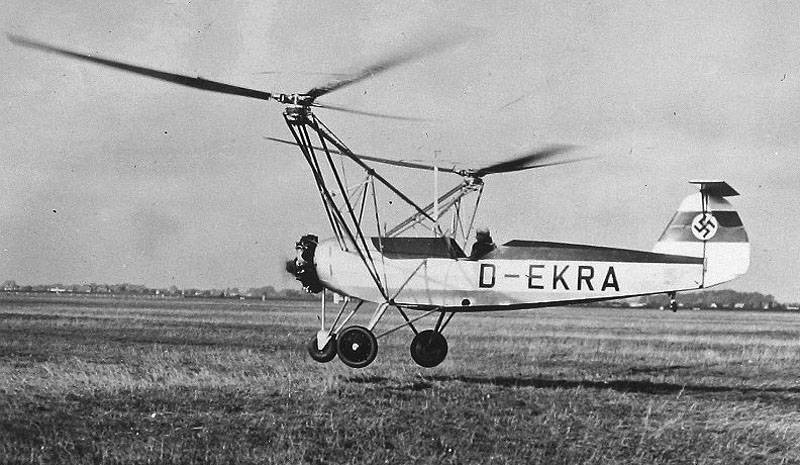 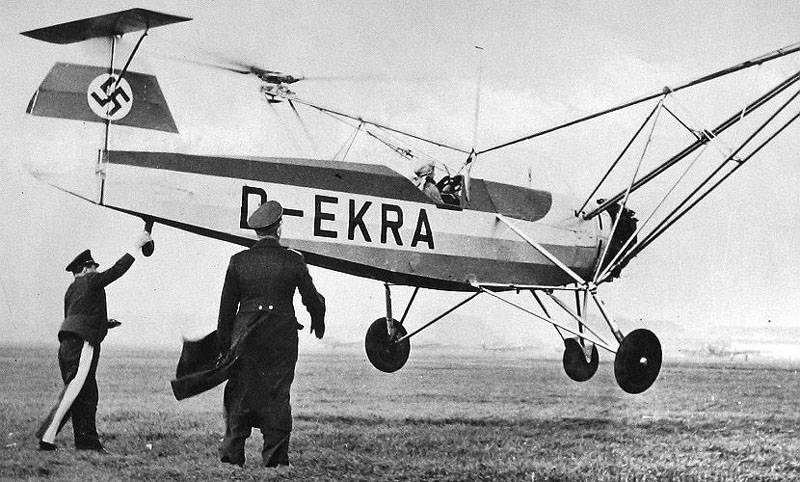 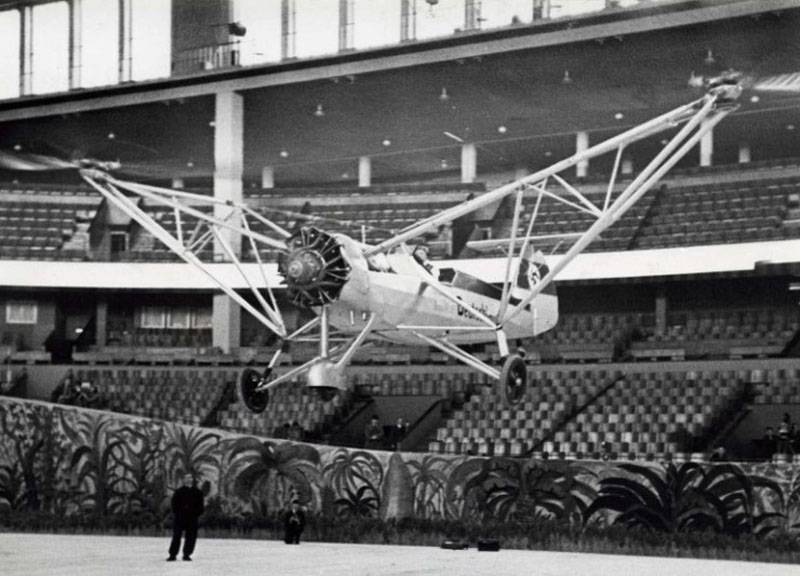 Rehearsal of a demonstration flight at Berlin's Deutschlandhalle indoor stadium. 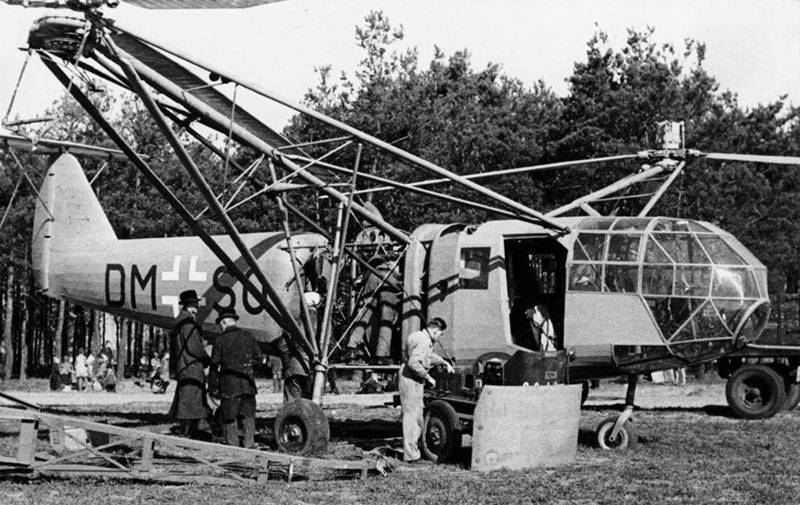 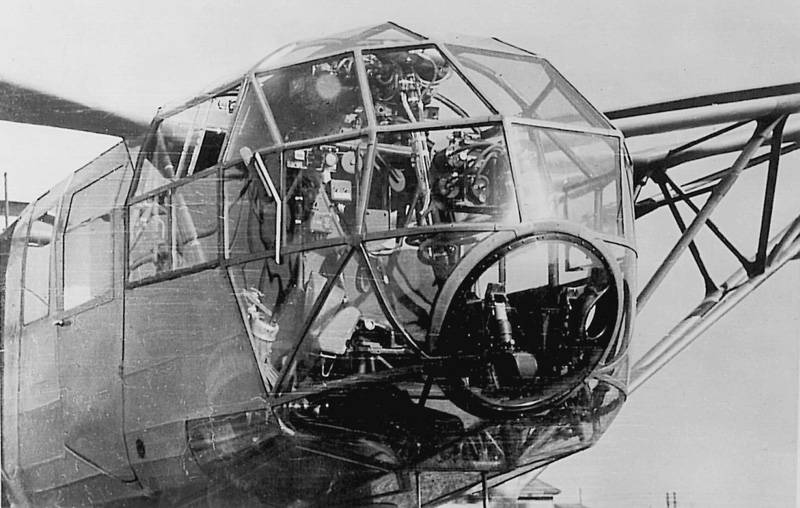 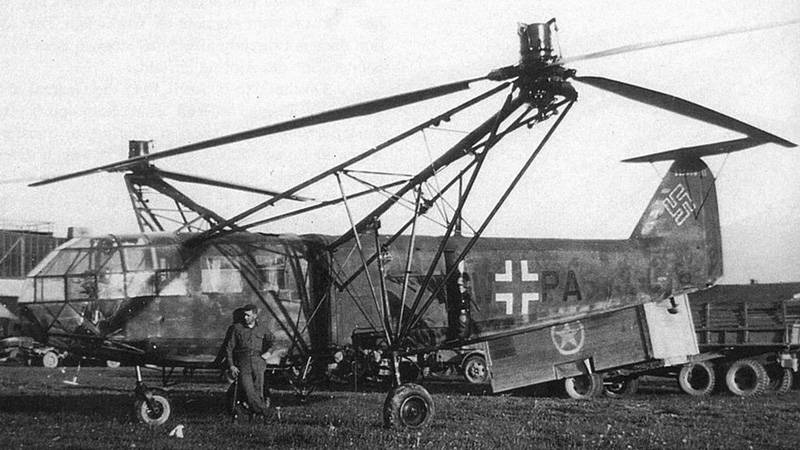 FA-223, captured by the Americans at the end of the war. 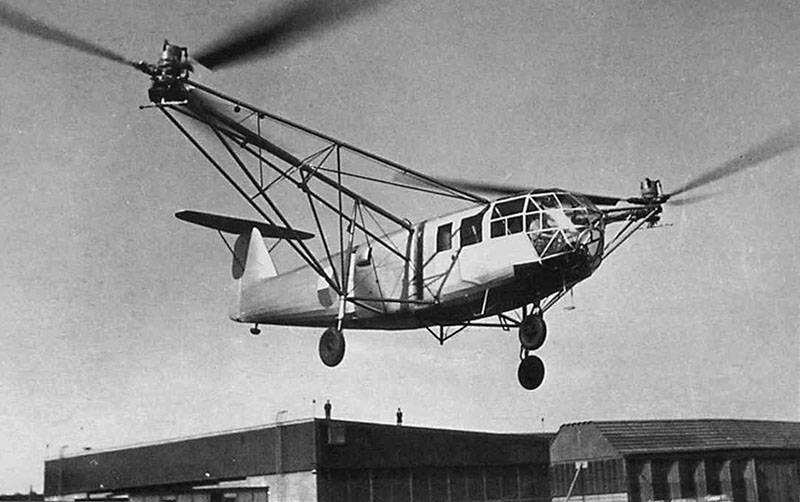 FA-223 in standard for these machines gray-green color.