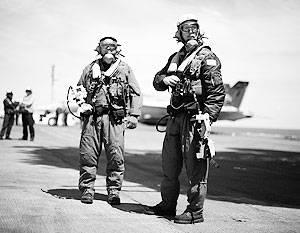 The United States faced an acute shortage of pilots, both in military and civilian aviation. The reason was a number of market mechanisms, including a drop in oil prices, as well as tightening requirements for pilots, dictated by the causes of some plane crashes. There is only one way out - the development of automation.

On the eve it became known that the new artificial intelligence ALPHA (developed by Psibernetix Inc) was able to beat a professional expert in imitation of air combat - Colonel of the US Air Force retired Gene Lee. According to the impressions of the colonel, ALPHA seemed to foresee his intentions, which, coupled with an instant reaction, ensured the victory of the computer. Similarly, ALPHA contractions with other specialists ended, even in cases where the speed, accuracy of shots and other characteristics of the computer-controlled aircraft were reduced. In the future, this computer will be able to participate in real combat operations, driving UAVs, coordinating fighters and calculating the strategy of the enemy.

The bet on scientific and technical progress in this sense is extremely relevant for the Pentagon: robots are especially needed precisely where there are not enough people. Back in May, the American and world media circulated newswhich does not fit in with the image of the United States as a great aviation power and a country where, in 1903, the first airplane in the world took off. According to CNN, there is currently a shortage of more 700 pilots — 511 fighters and 200 unmanned aerial vehicle operators (UAVs) —in the United States military. However, taking into account the fact that drones are being used more and more actively in military and special operations (since the 2006 year, the frequency of UAV use has increased 5 times), the Air Force intends to additionally invite at least 300 drone operators to serve, which brings the lack of flight personnel in the armed forces power up to xnumx people. And this is despite the fact that the US Air Force trains more UAV pilots than ordinary pilots.
The fact that fighter pilots and UAV pilots are currently more in demand by the Pentagon is confirmed by General Herbert Carlisle. However, the replenishment of the number of these specialists is not going as fast as the American military would like it to. One of the reasons is the “attraction” of civil aviation. Reduced fuel prices and the associated increase in the intensity of air travel led to the fact that airlines began to actively poach military pilots into the cockpits of civil aircraft.

The same Carlisle acknowledges that the Air Force can not compete with salaries and freer way of life, offering the former military pilots of the airline. However, according to him, moral incentives for combat pilots is much more than their civilian counterparts. As for the drones operators, the situation is even more difficult. Contractors such as General Atomics UAV pilots Pentagon offer relatively high wages, but the specifics of the work does not always provide a sufficient flow of willing to take a place in a bunker for controls drone.

As General David Perkins notes, land forces UAV operators are more satisfied with their work than their Air Force counterparts because they are deployed in combat zones from which they are piloting their vehicles: trips, including staying in other countries, change of impressions give the dynamics of their rather monotonous activities. Air force drone operators have much more boring life - from home by bus to a bunker located at the Creech Air Force base in Nevada, and after work - home by the same route. Because of this lifestyle, they often see themselves not as pilots, but as technical support personnel for the base. In addition, the career growth of the UAV operators is not as fast as that of the “classic” pilots.
The paradox of the current situation is that civilian aircraft also suffer from a shortage of captains. At the beginning of this decade, several pilots from America worked with Aeroflot with Russian passports. Many of them came to the United States with their parents at a young age, graduated from aviation colleges or universities, but, as one of them told LOOK to the newspaper: “In America, no one can go to any bush, shake it, pilots will fall down”. So they came to work for Aeroflot to recruit flight hours on large liners, and then return to the States as captains.

But now in the US, the demand for pilots (at least for local airlines) is no less, and maybe more, than in Russia. Previously, there was no such problem, because the flight staffs of regional airlines were usually replenished according to the following scheme: a pilot came from the Air Force, became a co-pilot, and after that became the captain of the ship on local airlines. The work was very low-paid - the co-pilot received about 20 thousand dollars a year, and the captain - no more than 30 – 40 thousand, but at the helm of a regional aircraft like “Embraer” or “Bombardier” you could accumulate experience and flight hours needed for transition to the "big" aviation operating aircraft of the type "Boeing" and "Airbus". Accordingly, the salary increased.

For example, the captains of the Boeing 777 or Boeing 787, flying 900 hours per year (Federal Aviation Administration - the FAA allows linear pilots to fly up to 1000 hours a year, but few pilots want to work so much) get for this period of time 264 is thousands of dollars, not counting all sorts of bonuses in the form of corporate air tickets and additional allowance for international flights in the form of 2,8 dollars for each flying hour.

This system has worked well for several decades, providing a continuous influx of pilots into regional aviation, which was for them as an internship for a graduate medical institute. It was possible to get on the 250 clock of the minimum required flying time — and “grow” to the “big” aircraft - to the seat of the co-pilot of a small but modern ship. But disasters on local airlines, including the lack of professional training for pilots (such as the fall of Colgan Air's Dash-8-400 in Buffalo, New York), broke this system.

In 2013, the FAA significantly tightened the conditions for hiring pilots to US airlines engaged in passenger or cargo transportation. 250 total flight hours and the presence of a commercial pilot license were not enough - 1500 hours and a linear pilot license were now required. Thus, in order to grow to the captain, it was required to fly even more 1000 hours as a co-pilot. Most new commercial pilots have no more than 250 – 300 flying hours.

The next difficulty is that in the USA the minimum age for obtaining a linear pilot license is 23 of the year, and the minimum total flight time is 1500 hours (1000, if you have a higher aviation education). There are, however, exceptions. A former military pilot without a license with 750 flying hours (one of the mentioned incentives for Air Force pilots to transfer to civil aviation), an 21-year pilot with a 1500 watch, or a college graduate with 1250 flying hours, if he received any -or aviation specialty. The latter, of course, is only possible if the college has already graduated from a rather mature pilot; most graduates of aviation colleges who have entered there from school have no more than 300 flying hours.

Thus, young pilots need somewhere else to collect 1200 hours, which at an average cost of flying around a hundred dollars makes it a very difficult task, the total solution of which is estimated at 120 thousands of dollars (and this does not take into account that obtaining a commercial license in 15 – 20 thousand). The only way out is to get an instructor at some flying school (there are almost as many in America as driving schools) and fly there with students, earning 25 – 30 dollars per hour, or even less, but in a few years you can dial the necessary hours for The Sessnach and the twin-engine Beechcraft. However, many, having accumulated 400 – 500 hours and tired of living from hand to mouth, decide to do something else, and potential graduates of flight schools, as well as colleges and universities of flight profile, looking at them, prefer not to get involved in the pilot’s profession, which leads to reduce enrollment in US flight schools.
It turns out that the pilots of major airlines have sat down at the helm in the time of the Vietnam War, retiring, and they do not change.

However, the requirement “to the right-hand seat - with an 1500 flying time” expires this year, and in order for it to retain its strength, the FAA must make an appropriate decision. Regional US airlines intend to ensure that this requirement is not extended. On the other hand, relatives and relatives of those killed in the already mentioned Dash-8-400 Colgan Air catastrophe in 2009, which was caused by the blunder of the captain and co-pilot, advocate for its preservation (although formally they had everything in order with the flight hours : the captain - 3379, and the co-pilot - 2244).

All the above-mentioned processes in the US military and civil aviation underline its, albeit diminished, but still lingering dependence on the human factor, and in the most critical control unit of the aircraft, the cockpit. This circumstance will be an additional incentive for the further computerization of aircraft, on the one hand, to further reduce this dependence, on the other - to reduce the requirements for qualification, and, accordingly, the cost of training people who will participate in the control of winged machines.