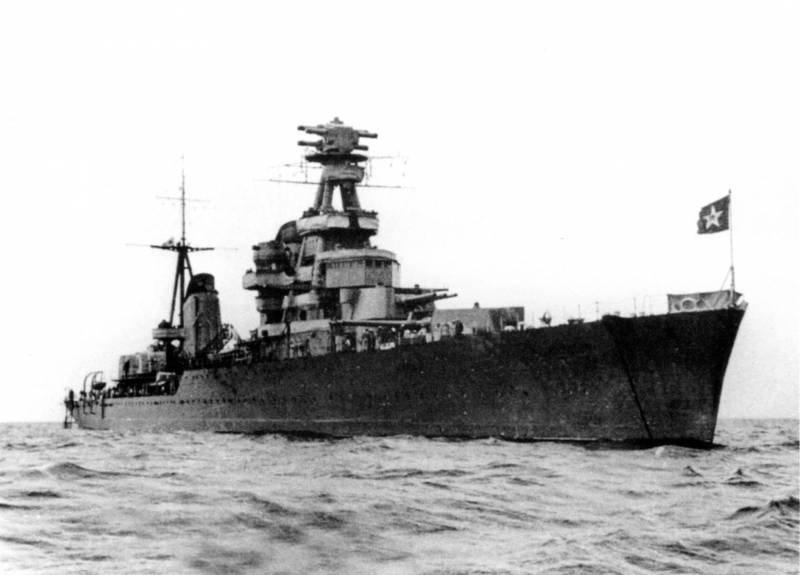 Getting ready to design for fleet a series of light cruisers, Soviet designers carefully studied the Italian experience in this area. They chose Raimondo Montecuccoli as the initial sample, and also bought from Ansaldo a full package of technical documentation on the mechanisms of the cruiser Eugenio di Savoy. Initially, the ship was planned to be armed with six 180-mm main-caliber guns with their placement in three two-gun towers, but in 1934 a rather bold idea was born to install three guns in the available dimensions. The disadvantages of this solution include the location of all the trunks in one cradle, that is, with a single vertical guidance drive, so one successful hit by an enemy projectile could damage the entire tower at the same time. However, the ability to increase by 50% the number of trunks of the main caliber still outweighed.
Construction began on July 11 1934, and on August 7, 1937, the ship made its first voyage. September 28 1938 Commission chaired by the captain 2 rank D.D. Valley signed the acceptance certificate.
During the Soviet-Finnish war "Kirov", based on Liepaja, went to sea to attack the coastal battery of the enemy on the island Russara.
The Great Patriotic War cruiser met on the roads of Riga. In the course of the defense of Tallinn from 22 to 27 in August, 1941 of the year conducted 36 firing at enemy troop concentrations.
During the Tallinn crossing, the Kirov was the flagship of the main forces. On board were the evacuees of the Red Banner Baltic Fleet Military Council and members of the Estonian government.
Since August 30, the cruiser repeatedly fired at German troops rushing towards Leningrad. Aviation the enemy repeatedly bombed the Kirov, but, despite periodically seeking hits, it was not able to sink the ship. February 27, 1943 the cruiser "Kirov" was awarded the Order of the Red Banner.
In addition to the "Kirov" in the Black Sea Fleet was built on the same project "Voroshilov". 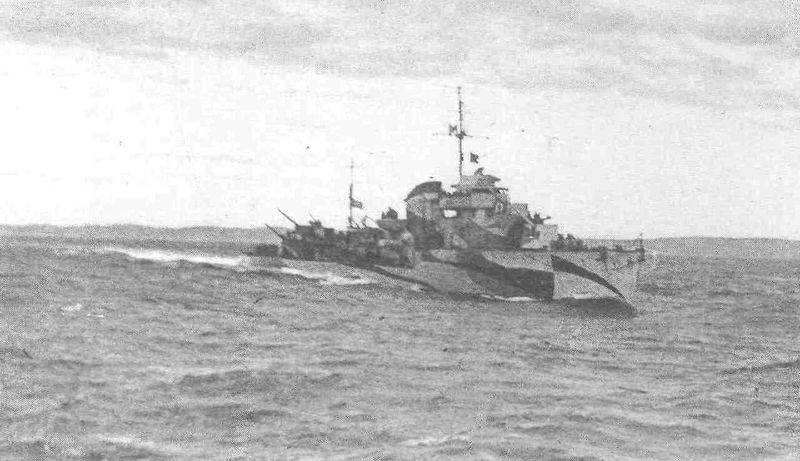 In the second floor. 1930-s in the USSR, developed under the leadership of Vladimir Nikitin and Pavel Trakhtenberg "Project 7" built 28 of the same type destroyers of the destroyers. The ships differed in powerful armament from four 130-mm guns of the main caliber and two three-tube torpedo tubes.
The most famous in the series was built at the Leningrad plant number 190 "Gremyaschy". He entered into service 28 August 1939 of the year, and in September he headed north along the White Sea-Baltic Canal. 8 November 1939, the ship arrived in Polar and was incorporated into the Northern Fleet.
During the Soviet-Finnish war, “Thunderer” carried out patrol and convoy service and did not participate directly in hostilities.
With the outbreak of World War II, the destroyer moved to Vaenga, and on June 24 set off on his first military campaign, guarding the Tsiolkovsky and Mossovet transports on the transition from Murmansk to Titovka.

On the night of 24 on 25 in November 1941 of the year, along with the same type of “Loud” and the British light cruiser “Kenya”, “Thunderman” participated in the shelling of the Norwegian port of Vardø, according to which 89 shells of the main caliber were fired.
29 March 1942 of the year, being in the guard of the convoy PQ-13, "Thundering" and the same type "Smashing" took part in repelling the attack of German destroyers.
1 March 1943, the ship assigned the rank of Guards. In the future, the command continued to use the “Thundering” mainly for the protection of convoys. In addition, in 1944, the ship participated in two raid operations: in the Motovsky Bay (October 9) and the shelling of the port of Vardø (October 26). 14 December 1944 was heavily worn out by the continuous combat service, the ship was put to overhaul at the plant number 402 in Molotovsk, after which it served until the 1954, he served as part of the White Sea military flotilla. Already as an experienced vessel, he took part in nuclear tests, after which he was submerged in Chernyaya Bay on Novaya Zemlya.
WATCHDAY SHIP "LIFTABLE"

At present, "Sharp-witted" is the only remaining ship in the system of the "Project 61", which fell to play a prominent role in the era of the "cold war". The development of the project, which began in the 1950s, was primarily associated with the appearance of sea-based nuclear missiles, which turned submarines into strategic weapon. As a countermeasure, they began to create new missile weapons intended for the destruction of enemy submarines, and by the beginning of the 1960-s, special-purpose ships, a new class, which was named in the USSR by the name of the Large Anti-Submarine Ship.
The fact is that sea-based nuclear missiles of the NATO fleets that were in service at that time did not differ in long range, forcing submarines to approach the enemy’s borders almost immediately before launch. Therefore, the creation of echeloned anti-submarine barriers became an effective countermeasure. It was assumed that in the far zone enemy submarines would be intercepted by helicopter carriers and basic anti-submarine aircraft, and in the near zone by large anti-submarine ships.
The gas turbine version was preferred as a power plant, to the positive sides of which the lower specific gravity and quick start (5 – 10 minutes) from the cold state should be attributed. It is for the melodious whistle of gas turbines BOD "Project 61" in the navy called "singing frigates." Given that the ships were to operate even in the conditions of the use of weapons of mass destruction by the enemy, the design of the hull and superstructures made it possible to conduct military operations without the presence of personnel on the upper deck and bridges. The armament consisted of two anti-aircraft missile systems, two twin 76-mm turret artillery mounts, a five-pipe torpedo tube, two jet bombers and an anti-submarine helicopter.
At the time of the construction of the BNC "Project 61" in their combat capabilities were almost equivalent to their modern American missile-carrying destroyers. For several decades, repeatedly undergoing modernization, they served on all oceans, ensuring strategic parity. Gradually, however, ships of this type, beginning with the 1990-ies, began to withdraw from the fleet. A different fate has fallen to the “Sharp-witted” year, which was transferred to the class of patrol ships in 1992. And now he continues to carry out military service as part of the Black Sea Fleet, performing tasks including off the coast of Syria.
ROCKET CRUISER "MOSCOW" (FORMER "SLAVA") 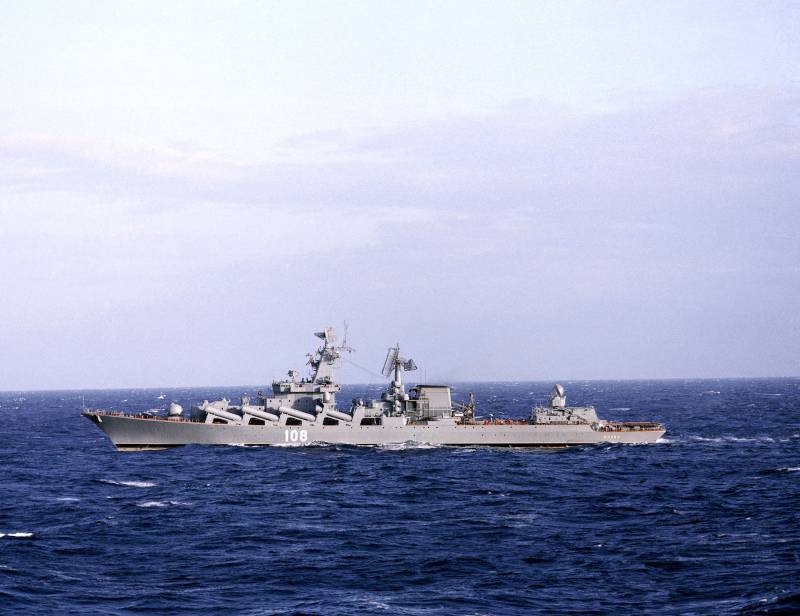 The starting date for the 1164 Project is considered to be the 1972 year, when they formulated the tactical and technical requirements for new missile cruisers designed to give the fleet forces in distant naval theaters combat stability and to destroy the enemy's large surface ships. The chief designer appointed director of the Northern OKB Alexander Perkov. It was assumed that each ship would carry 12 launchers of Basalt anti-ship missiles, C-300F and Osa anti-aircraft missiles, 100 and 30 mm artillery mounts, as well as two five-pipe torpedo tubes.
Originally planned to build ten ships of this type, but later the order was reduced to six units. As a result, only four cruisers were laid, and three were added. The head has become commissioned in the 1983 year, "Glory." In 1989, the ship took part in providing a meeting between General Secretary of the CPSU Central Committee Mikhail Gorbachev and US President George W. Bush, and in 1990, the Yalta International Conference on Nuclear Weapons Control was held on board.
The new name "Moscow" ship received 16 May 1996 year after the cancellation of the obsolete anti-submarine cruiser named after the capital.
From 9 to 12 in August, 2008 of the year participated in an armed conflict with Georgia, fulfilling the tasks of ensuring the actions of the Russian group. From 30 September 2015 of the Year “Moscow” heads the permanent operational connection of the Russian Navy, which covers the actions of the Russian air force in Syria.
Small rocket ship "BORA" 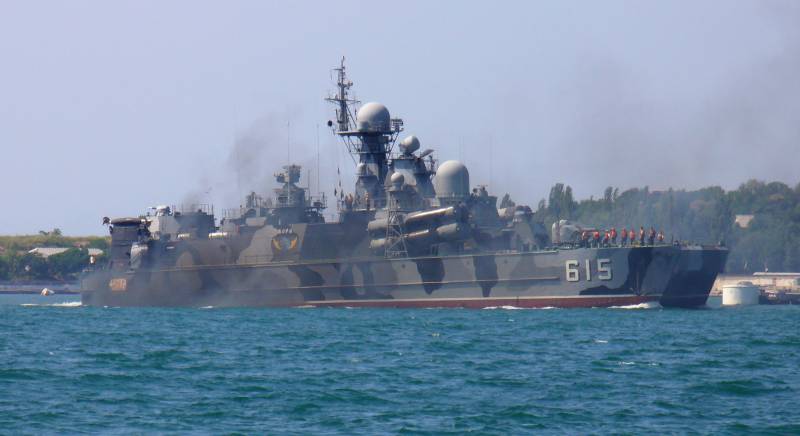 The small Bora hovercraft, launched in 1997, was the largest catamaran with an aerostatic airbag in the world shipbuilding practice. It is designed to destroy enemy warships and transports, to provide cover for high-speed amphibious formations and convoys, as well as to conduct reconnaissance and patrol service in the operational zone of our forces.
It was the synthesis of the catamaran and the airbag that made it possible to combine two practically mutually exclusive characteristics in the construction of one ship: the installation of powerful weapons and the provision of high-speed full speed. As a result, eight Mosquito anti-ship missiles were able to be placed on a relatively small platform, and the speed reaches 55 nodes (101,9 km / h).
At present, the Bora and the Samum of the same type that are part of the Black Sea Fleet continue to be unique ships that have no analogues in the world.