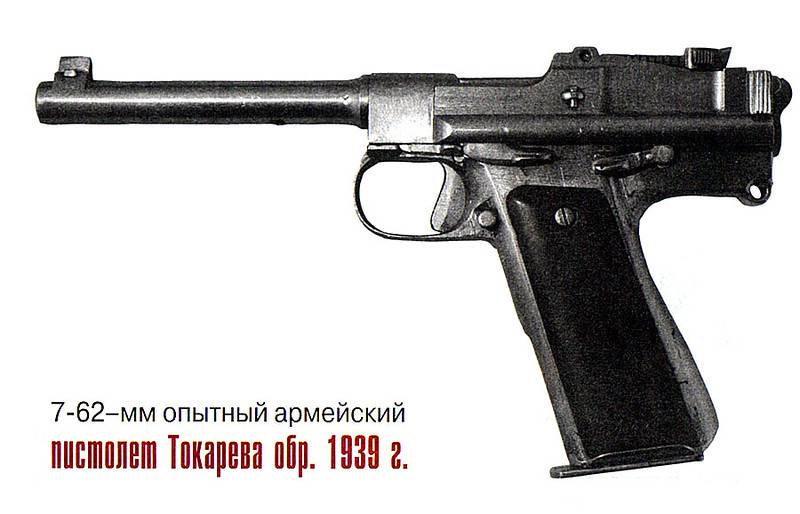 The TT pistol (Tula, Tokarev) of the 1930 model, under the 7,62-mm Mauser cartridge, served for several decades in the Red Army and other power structures of the Soviet Union armament system. Structurally, the TT was an exact copy of the Browning pistol of the 1903 model, but with a rigid locking of the barrel bore borrowed from the Colt pistol of the 1911 model of the year.
During World War II, the TT pistol was the main personal weapons officers and generals of the Red Army. After the war, the TT, which became a symbol of the army that defeated fascism, gained considerable popularity abroad. Various of its foreign versions are known, including those for the 9-mm Parabellum cartridge. In certain structures, the TT pistol was popular until the beginning of the 21 century.
Along with all this, little is known of the fact that literally several years after the TT was put into service, the question was raised about replacing it with another pistol.
17 May 1938, a competition was announced for the design and manufacture of a new model of a self-loading pistol for the 7,62-mm Mauser cartridge.
Competitive tests of pistols by various authors were held until March 1941, and only the outbreak of the Great Patriotic War prevented the planned adoption of a new pistol.
Among the participants of the competition was F. Tokarev, who presented a pistol with a protruding barrel, like the German “Parabellum” or the Japanese “Nambu”. Such a configuration of the pistol seemed to the military customer suitable for arming tankers. The pistols of the competitors P. Voevodina and I. Rakov had the same shape. 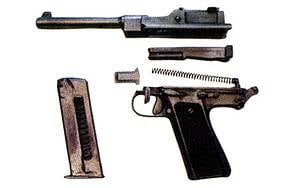 Below is a description of a self-loading pistol designed and manufactured for the competition personally by F. Tokarev in 1938-1939. Unfortunately, the Tokarevian designs of this period are overlooked by the domestic weapon historians.
According to the type of automatics, the gun refers to a weapon with a short barrel stroke and rigid shutter locking. The bolt is locked with a swinging latch of a simple form, located in the receiver. Regarding the frame of the pistol, the receiver box is spring-loaded with a separate short spring. Shutter pistol of rectangular cross-section, with a return spring located around the kick-peak. The trigger mechanism of a pistol of the hammer type, with an open trigger without a pickup. The spring is located in the frame of the pistol and interacts with the trigger in the same way as the Mauser K-96.
Shop gun on 15 cartridges, with their two-row arrangement and two-row output. On the left side of the frame of the pistol, in the front part of it, there is a checkbox flag. After turning it (like the “Parabellum” and “Walter P-38” pistols), the receiver with the bolt is separated from the frame forward. The recoil spring remains on the frame stand, and the bolt and firing pin with the firing pin spring fall out of the removed receiver. In the middle of the frame is the shutter stop lever, and behind the back of the store is a safety lever.
Pistol sight sector, with cutting tick marks to 1000 m.
Structurally, the gun is original and not similar to other pistols of those times. Externally, the receiver with the barrel and bolt have some features of the "Mauser K-96", but in general the gun is much simpler and more technological than the "Mauser".