July 9 2016
9
On the eve of the attack by the fascist aggressors on the USSR, they planned to seize large oil fields in the Middle East — in Iraq, Saudi Arabia and British Kuwait. The "gas station" of the Third Reich and its puppets was Romania. Synthetic (coal) oil was produced in Germany. But for a large-scale war, these resources were clearly not enough.
The future allies of the USSR were able to protect the Middle East oil "bins". And thus they detained the fascist invasion of the Soviet Union for a month and a half. Although, we recall, it was precisely from the Middle East that aggression against the USSR was planned with the participation of Turkey (the “Fuel” plan) in March-April of 1940. But the military-political conjuncture often changes quickly ... 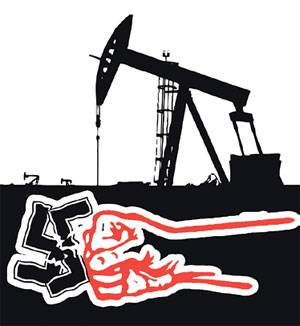 The main target of the German strategists at that time was Iraq. In fact, it has been a protectorate of London since 1918, although it was formally independent from 1932. But there remained large British military bases. London-controlled Iraqi oil production, starting in 1922, increased rapidly. Up to 70 percent of its volume went to the UK.

German agents were able to secure the coming to power in Iraq of 31 in March of 1941, the government of General Rashid Gailani, who advocated the complete withdrawal of the British from the country. In April, consultations began on the transfer in concession to German (and partly Italian) companies of large deposits in central and southern Iraq. The subsequent export of the extracted raw materials through Turkey and Syria (then the French protectorate) to Germany and Italy was supposed. The British condemned the actions of Gailani and refused to transfer the ownership of Iraq (according to a general decree) of their oil and financial assets in this country. Meanwhile, supplies of Baghdad with German and Italian weapons began to grow rapidly in April, mainly through Turkey and Syria. The military "advisers" arrived from the Third Reich.

In the same period, we recall, the British troops suffered defeats in Yugoslavia and Greece, but many experts believe that London deliberately "left" from the Balkans due to the inevitability of the military operation in Iraq. The situation was exacerbated by the support of Gailani and the Germanic Middle Eastern plans by the authorities of neighboring Syria and Lebanon, the French protectorates, who until the fall of 1941 were subject to the collaborationist regime of Petain. Although the troops of DeGoll "Fighting France" have already attacked with British support on Damascus, Aleppo and Beirut.

The Axis’s plans regarding Middle Eastern oil were substantiated by the repeated bombardment by the German-Italian air forces of Saudi Dahran, the main port oil storage facility in the region with the distillery, and nearby fields. This reduced petroleum and petroleum product exports from 1940-m to the beginning of 1941-from there by about a quarter. It would seem that Riyadh should have entered the war against the Axis, but this happened only on March 1 ... 1945. Saudi oil already controlled American business in those years, and in Riyadh they seemed to want to change the situation.

The British Air Force, located in neighboring Kuwait, after 1940 did not allow Hitler’s aviation get closer to saudi sites. Meanwhile, on May 2, British troops (units of the “Fighting France” joined them a little later) began military operations against the Iraqi army. By May 15, they had taken Baghdad, but the Gailani regime was overthrown by the British only on May 30. And before that, just in the middle of May 1941, a German-Italian landing was planned near Dahran. At the same time, Gailani’s troops were to occupy neighboring Kuwait to join this landing. It didn’t work out.

German Field Marshal Rommel noted in 1943: “Instead of active operations in the Libyan desert, it was more expedient for the troops of Germany and Italy, using the position of the Vichy authorities in the Levant (Syria and Lebanon. - A. Ch.), To penetrate into Iraq in the spring of 1941 and gain a foothold there, starting after that, perhaps, actions in the British "oil" Kuwait. This would strengthen the Axis economy on the eve of an offensive on the USSR. ” Italian Foreign Minister Count Ciano also lamented the impossibility of a prolonged Axis war without Middle Eastern or Baku oil. General Wavewell, commander of the British and DeGoll forces in the Middle East in 1941, believed that “the German-Italian seizure of Iraq’s oil and especially Kuwait would speed up the Axis military alliance with Turkey and could well lead to a strong blow to the USSR from the south already in 1941 m And the position of the allied forces in the region would have become more complicated. ”

That is, the threat of German seizure of Iraqi, and Saudi, Kuwaiti oil was virtually eliminated on the eve of the Great Patriotic War. And the war itself mentioned events in the Middle East somewhat delayed. It is useful in this regard to recall that by 1941, Saudi Arabia, Iraq, Kuwait provided up to a quarter of world oil production.

Metamorphosis: pro-British Iraq, as already mentioned, was the main springboard of the plan of joint aggression by Britain, France and Turkey against the USSR in the spring of 1940. But the Soviet-Finnish truce 12 March 1940-th buried this plan.

Ctrl Enter
Noticed oshЫbku Highlight text and press. Ctrl + Enter
We are
Diplomats of the People's Commissariat of Defense: on the eve and during the war"Desert Storm". A quarter of a century ago, Saddam Hussein’s troops left Kuwait
Military Reviewin Yandex News
Military Reviewin Google News
9 comments
Ad