India at a crossroads 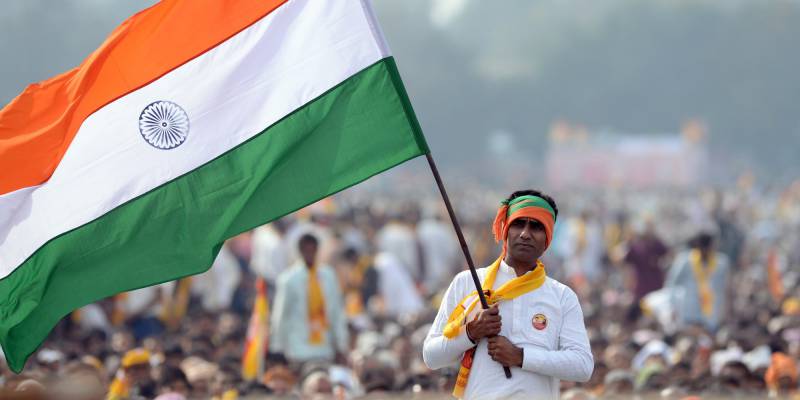 Two years later, after the sensational victory of the right-wing forces in India, the problems that caused this serious political shift were not even partially resolved. On the contrary, the country's leadership is taking dangerous steps in domestic and foreign policy, which sharply raises the question of rallying left parties.

Triumph of the Right

The importance of the recent legislative elections in a number of Indian states has gone far beyond these regions. The voting results became a kind of litmus test, reflecting the main trends in the country's public and political life. But before analyzing the significance of the elections, it is worth going over two years ago, namely in the middle of May 2014, when the new composition of the Lok Sabha became known - the lower house of parliament. The Indian National Congress (INC), who ruled the country for more than six decades with small interruptions, suffered a crushing defeat. The party has experienced failures before, but to get all the 45 seats from 545 - this has never happened with the most influential party.

The main reason for the failure was the disappointment of voters. If during the time of Nehru and Indira Gandhi, the congress declared adherence to socialist ideas, and in foreign policy was oriented towards the USSR, in 1990 the party drifted towards neoliberalism and strengthened relations with the United States.

The triumph of the parliamentary elections was the Bharatiya Janata Party (BDP). She won a constitutional majority and formed a government headed by Narendra Modi. In contrast, the secular INC. BDP is the political wing of Hindu nationalism. Having achieved the status of one of the leading parties in the country, she herself formally abandoned radical appeals, but still maintains close ties with groups of frankly extremist orientation, such as Shiv Sena or Rashtriya Svayamsevak Sangh. And the leaders of the BDP themselves are often implicated in interethnic conflicts. The current premiere is still remembered for 2002's anti-Muslim pogroms of the year. They occurred in the state of Gujarat, whose governor at the time was Modi.

However, before the 2014 elections, the BDP proclaimed itself a nationwide force capable of defending the interests of all nations and social groups. The party did not stint on the promise, declaring the fight against poverty and promising the transformation of India into one of the leading world powers. For the benefit of the BJP, the annoyance with the rapprochement with the United States also played. After the Gujarati pogroms, Narendra Modi was denied entry to the United States, which created for him, as well as the entire party, an aura of defenders of national interests.

Under the burden of neoliberalism

This artificial image dissipated pretty quickly. Hardly came to power, the government initiated a number of liberal-type reforms, while the promised social programs were postponed. The first thing the authorities opened the doors to Western corporations. The insurance sector and railways are open to foreign capital, and its maximum share in the defense industry has been increased from 26 to 49 percent. At the same time, the authorities initiated a revision of the legislation in order to facilitate the purchase of land by foreign companies.

Not less resonance caused labor law reform. According to the published plan, the minimum wage will be set not by the central government, but by the state governments, which will inevitably turn into its reduction. Secondly, enterprises that employ less than 300 workers are now free to hire and dismiss (first, companies with more than 100 people were required to receive permission from the authorities). Thirdly, the requirements for trade unions are tightened. From now on, to create them, it is necessary to obtain signatures of at least 30 percent of the company's employees (the previous rate was 10 percent). In addition, despite promises to ban child labor in hazardous industries, restrictions affected only three of the 83 professions.

The reform provoked protest from opposition parties and trade unions in India. There have been several nationwide strikes in the country, but the government is going to bring it to the end.

But the government is not going to embark on another reform, the need for which has long been overdue. We are talking about the land issue, which has become a real curse of modern India. They tried to solve it from the beginning of 1950-ies, but the reform ran into resistance from the land aristocracy. As a result, the authority to redeem excess land from landlords was transferred to the states, and in most of them this process has not been completed yet. Almost 80 percent of farms in the country are small, their average size does not exceed one hectare. Large landowners own an average of 45 hectares. There are less than five percent of such farms in the country, but they control a third of all cultivated land.

In conditions when the population of the country increases by 15 million people per year, this leads to the pushing of huge masses of people into the cities. The industry is unable to employ them, as a result of which the informal employment sector swells and the number of beggars increases. According to official data, the poor in India are less than 30 percent of the population, but if we start from international standards that consider the income threshold to be below two dollars a day, those in the country are not less than 80 percent.

In foreign policy, the government not only continued its course toward rapprochement with the United States, but also took a number of steps that even the Indian National Congress did not take. In an interview, Narendra Modi called Delhi and Washington "natural allies" and said that their common goal is to strengthen democratic values ​​throughout the world. The United States, however, is guided by much more pragmatic interests. Their goal is to turn India into an active member of the anti-Chinese coalition. In Washington they talk about it openly. A recent Pentagon report calls Delhi a key player in China's containment strategy.

The Indian authorities are not yet going to open confrontation with a neighbor: the country's dependence on Chinese imports and fears of the economic and military might of the Middle Kingdom affect. But Washington did manage to achieve a number of concessions. In accordance with the agreement between the defense departments of the two countries concluded in April, the United States was able to use Indian military bases to refuel and repair its ships and aircraft. The joint statement by the defense ministers, Manohar Parrikar and Ashton Carter, emphasized the “importance of ensuring ... freedom of navigation and overflight over the region, including the South China Sea”. These words were clearly meant for Beijing. The PRC is opposed to the entry into its territorial waters of the US Navy ships that refer to "freedom of navigation."

A new US-Indian agreement on military cooperation is being prepared for signing, and it is possible that it will mark the next preferences for Washington. This is indicated by the creation in the Pentagon of a special department for relations with Delhi, and the introduction of a new partnership status for India, involving the simplification of military-technical cooperation procedures to a level operating within NATO.

In the meantime, the naval forces of India, the USA and Japan are playing with their muscles, conducting the annual Malabar naval exercises in the Bay of Bengal. And 9 — 17 June — large-scale maneuvers in the same composition were already in close proximity to the territorial waters of China - in the Philippine Sea.

All these steps by the authorities weakened the BDP’s rating. Last year, the party suffered a crushing defeat in the local elections in Delhi and the state of Bihar. For the government, the blow was doubly painful. It is the state legislatures that send representatives to the upper house of parliament. Unlike the lower house, the BDP does not have a majority there, which makes it difficult to carry out reforms.

It is not surprising that the current elections received special attention from both the BDP and other major political forces. Despite tremendous efforts, the ruling party was able to win only in one of the five regions - Assam. The elections also showed the continuing decline in the popularity of the Indian National Congress, which managed to get a majority only in the assembly of the tiny Pondicherry region. In two states (West Bengal and Tamil Nadu), the regional parties won, and in Kerala, the Communists.

Faced with the loss of popularity, the government is resorting to the help of reactionary ultra-right forces. This bias towards nationalism manifested itself last year. At the pre-election rally in Delhi, the food industry minister Niranjan Jyoti called the BDP candidates “children of the god Rama” and the opposition members were illegitimate. Despite massive indignation, Modi refused to remove the minister from office.

During the current elections, militants of the Rashtriya Svayamyavak Sangh organization (of which, by the way, the current Prime Minister himself was a young man), repeatedly attacked leftist activists in Kerala. 19 May thundered two explosions at a rally of communists celebrating the victory. One person died, eight were injured. The guilty have not yet been found, but in Kerala they are sure of involvement in the terrorist act of the far-right militants.

The neoliberal course and dangerous flirting with ultra-right factions dictate the need for a broad alliance of secular, leftist forces. This is especially relevant against the background of weakening and care of the Indian National Congress to the right. In the largest party of the left spectrum - the Communist Party of India (Marxist) (KPI (m) - understand the importance of this task. Its general secretary, Sitaram Yechuri, said that Modi’s attempts to gain maximum power through neoliberalism and inciting religious hatred would "be stopped with a hammer and hammer" .

But this goal requires wisdom and hard work from the left forces. On the one hand, there are prerequisites for the growth of their influence. In the last elections in Kerala, the Left Democratic Front, led by the KPI (m), won a convincing victory and formed a regional government. The state of Kerala, the Communists almost continuously led from 1957 year, and during that time he came out on top in India in terms of literacy, life expectancy of the population and the last - in terms of poverty and child mortality. In 2011, however, the left coalition, however, ceded the primacy of the INC. And went into opposition. As it turned out, not for long.

The Communists are in power in another Indian state - Tripura. In other regions, their influence is not so great. In West Bengal, which the Communists led from the 1970-s, they suffered a heavy defeat five years ago. In the last election, the result was even worse - just 32 seats from 295. In many ways, this was influenced by an ill-conceived alliance with the Indian National Congress. But not only. The disappointment of voters in the left government was preceded by the events of 2007 of the year in the Nandigram area. The state authorities tried to create a free economic zone there for the construction of a chemical plant, but they came across protests of the peasants. Dispersing the rally, the police opened fire to kill, which led to the death of 14 people. The tragic incident dealt a serious blow not only to the reputation of the state authorities, but also to the positions of the Communists throughout the country.

So, solving the task of uniting the left-wing forces, the Communists of India will have to carry out their own "work on the mistakes." Without exaggeration, the country's future depends on its success.