30 2016 June
92
Colonel General Vasily Tonkokurov, head of the Main Organizational-Mobilization Directorate of the General Staff of the Armed Forces of the Russian Federation, spoke about the progress of conscription to the Armed Forces. According to the representative of the Ministry of Defense of the Russian Federation, who is responsible for the recruiting campaign, a positive trend continues to manifest itself due to a decrease in the number of draft dodgers. General Vasily Tonkoshkurov notes the growing interest of young people in the service of conscription in the ranks of the Russian army.


Vasily Tonkoshkurova quotes news agency TASS:
In those regions where regional and zonal centers are actively involved in the work, young people are more willing to go to serve in the Armed Forces, the number of citizens evading from activities related to military conscription is significantly reduced. As a result of 2015, the number of such citizens has already decreased by almost 28 percent. 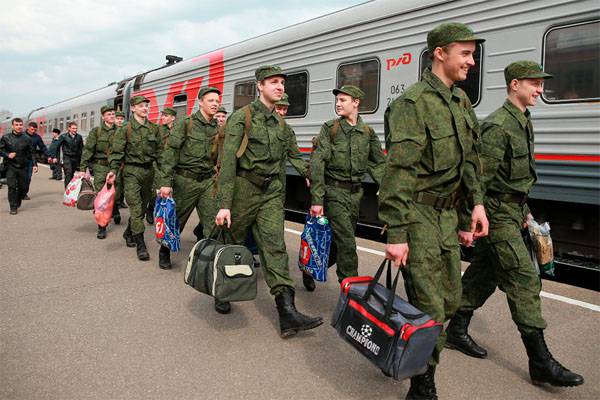 This statement was made by the representative of the Ministry of Defense of the Russian Federation during the on-site meeting of the interdepartmental commission in the Stavropol region.

The general noted that today in 45 regions of the federation there is an 231 center for the patriotic education of young people. Among these subjects are the Republic of Crimea and the hero city of Sevastopol.

It is noted that almost every fifth modern draftee goes to the service, having received a higher education. Even 15 years ago, the number of university graduates in the recruits of the Armed Forces of the Russian Federation was no more than 7%.

Ctrl Enter
Noticed oshЫbku Highlight text and press. Ctrl + Enter
We are
The General Staff of the Armed Forces of the Russian Federation: the number of draft dodgers decreases, the percentage of young people’s fitness for military service is growingThe crisis of the armed forces of Russia: Medvedev and the General Staff enter into a skirmish ('The Jamestown Foundation', USA)
Military Reviewin Yandex News
Military Reviewin Google News
92 comments
Information
Dear reader, to leave comments on the publication, you must sign in.