The energy field of Iraqi Kurdistan: political and economic advantages. Part of 2 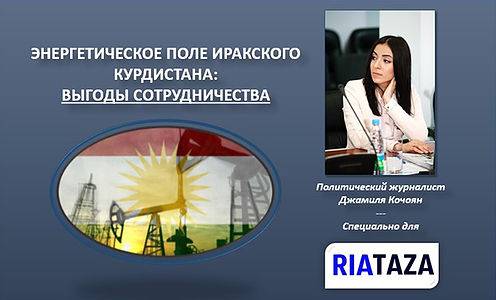 Speaking of political advantages, I would like to recall the Cisca Pico agreement. At first glance, this agreement has no connection with the subject of the study, however, recall the details of the project. Saiska-Picot is a secret agreement between the world powers on the division of the Middle Eastern territories (first signed by France, Great Britain, then Russia and Italy joined). According to the terms of the Sykes-Pico project, the territory of Asian Turkey was to include the autonomous territories of Palestine, Syria, Iraq, the Arabian Peninsula, Armenia and Kurdistan. In turn, the great powers had to guarantee their independence, Constantinople with the straits were to be cut off from the territory of the Ottoman Empire and go to Russia (at the beginning of the 20th century), Kurdistan also includes these lands.

The significant date of signing the agreement is 16 of May (1916 of the year). It was exactly after 100 years (May 16 2016 of the year) that the Kurds "responded" to Turkey with downed air transport. Proof was given - a video in which the Turkish Chinook military transport helicopter crashes. No less significant are the conditions indicated by Russia under which it approved the Sykes-Picot agreement: if the agreement on the straits and Constantinople (present Istanbul) is implemented, Eastern Anatolia and the territory of Kurdistan, which is in modern Turkey, should be transferred to Russia. In connection with the peculiarities of the foreign policy of Russia, the agreement is of particular relevance. The weakened Russian-European relations led to the intensification of relations between Russia and the Middle East, which can be called the great return of Russia to the Middle East.

This is effective participation in the civil war in Syria, which led to the resolution of the conflict, an increase in the number of meetings between Russia and representatives of Kurdistan (meeting with S. Demirtas, opening a representative office of Syrian Kurds, an ardent call for the participation of Kurds in the Geneva peace talks, positioning the Kurds as allies in the federal media and so forth). Also, the arming of Iraqi troops in the fight against the “Islamic State” (it’s not surprising at all will be possible news on Russia's participation in the settlement of the civil situation in Iraq on the format of Syria), a new round of Russian-Iranian relations (military cooperation is activated), etc. All of these events prove the obvious Middle Eastern emphasis on foreign policy..

Based on the above, we can state the following advantage for Russia is the realization of its energy prerequisites in the Middle East, and considering that Kurdistan is one of the richest regions in the region with the world's largest oil fields, it certainly should take the initiative to expand bilateral cooperation Iraqi Kurdistan. It seems that it is important for Russia to support Iraqi Kurdistan in independence (this will lead to the development of energy independence, and autonomy will be free to conclude more lucrative contracts with international, including Russian companies, which have so far been restrained by Baghdad). I really hope that Russia will adequately head the list of countries that were the first to recognize the independence of Kurdistan.

In my opinion, in addition to supporting the armed forces of Iraq, Russia needs to arm the Iraqi Kurds (who are the only regular army of the republic) and do it officially, without fear of the reaction of Iraq or Iran. Russia currently has a choice in favor of supporting Iraq or Iraqi Kurdistan. And the value of autonomy compared with Iraq is more pragmatic to prove in numbers:

- 2% of global hydrocarbon reserves are located in Iraqi Kurdistan
- the rate of geological success in drilling exceeds 70%,
- the timing of reaching the first oil since the discovery of deposits in the CAR is significantly lower than the average seven-year value (Taq Taq = 2,5 field of the year, for Tawke field = 1 year),
- for investors, the attractiveness is determined by the implementation of projects on the terms of production sharing agreements (PSA, Production Sharing Agreement),
- advantageous location of the region next to the promising market in Turkey, where it is planned to supply oil from Kurdistan,
- higher than in other regions of Iraq and other countries of the Middle East, - the level of security entails the active development of the region’s oil and gas industry,
- financial savings due to the lack of the need to drill a significant number of wells in the process of field development (at the Taq field of Taq, one of the leading fields in the region, it is planned to achieve a production level of 10 mln tons per year based on a fund of twenty wells).


Currently, from 57 license blocks located in Iraqi Kurdistan, 49 is distributed among 33 companies [ii].

The oil component of the autonomous region of Iraqi Kurdistan is the main factor in the possible and at the same time impossible independence of autonomy from the center.

- on the one hand, rich oil fields give autonomy economic support and financial stability, which has priority for a sovereign state. In addition, the resources of "black gold" provide the main costs of the region.

- on the other hand, the oil independence of Iraqi Kurdistan (concluding contracts bypassing Baghdad) increases the prospects for escaping from Iraq, which destabilizes the weather relations between autonomy and the center. Since the profits from the oil of the Kurdistan region goes to the treasury of Iraq. Kurdistan is rich, it is clear that no state will want to cut the state budget with its own hands and refuse gold reserves, for which the world powers are fighting hard.

Stereotypically, it seems that building up cooperation (especially based on the oil industry) between Russia and Iraqi Kurdistan could be a complicating factor for the Russian-Iraqi partnership. I dare to convince the reader and propose to recall history Russian recognition of the Armenian genocide.

At that time, it was believed that, by recognizing the Armenian Genocide, Russia would spoil trade and economic relations with Turkey. However, this not only did not happen, but on the contrary, Russia and Turkey subsequently became the dominant strategic partners for each other. Having recognized the genocide in 1995, since the end of the 20th century, Russia and Turkey have reached a qualitatively new level, which predetermined the further course of development of relations between the two countries. The new stage of Russian-Turkish relations marked the transition from rivalry to a multifaceted, broad cooperation in various fields: foreign policy, economics, defense industry, culture. Although nowadays Russian-Turkish relations are in crisis, this is not connected with the Armenian genocide.

At the same time, the numerous “Russian-Kurdish roll calls” clearly indicate that the Russian leadership intends to significantly expand the field for its political and economic presence in the Middle East.

Speaking about international recognition, it is important to note that more than 30 countries today are ready to recognize and support the independence of Iraqi Kurdistan. This is the merit of the Kurds, above all, for the success in the fight against LIH. In fact, Iraq is already fragmented, Kurdistan needs to stabilize its economic situation and decide to hold a referendum.

Discussions about the plebiscite of Iraqi Kurdistan have been going on for more than a year (a particularly active period is three years). 5 May 2016 Head of Security Council of Iraqi Kurdistan Masrour Barzani published an article in the American The Washington Post, where he clearly and clearly argued the need for autonomy: “Iraq is a failed state, and our presence in it dooms us all to endless conflict and enmity ... Iraq - this is a country that cannot protect its people and can hardly define its own interests ... That is why Iraqi Kurdistan will hold a referendum on creating a sovereign state that formalizes a divorce from Baghdad m and make the safe areas, which we are now in control, home to the Kurdish people »[iii]. Plebiscite is scheduled for September 2016. There are advantages and ideological ones: by supporting the Kurds, Russia will receive a “brave and heroic people” among the allies in the Middle East.

[i] Get acquainted with Part of 1 - Energy Field of Iraqi Kurdistan: Analysis of Political and Economic Barriers

[i] According to the Concept of Foreign Policy of the Russian Federation, approved by President of the Russian Federation V.V. Putin 12 February 2013, Russia, in order to further expand cooperation with the states of the Islamic world, Russia will use the opportunity to participate as an observer in the Organization of Islamic Cooperation and contacts with the League of Arab States, the Cooperation Council for the Arab States of the Gulf. Russia is determined to further develop bilateral relations with the states of the Near and Middle East and North Africa.

[ii] Kirdey, O. Last Stand: In the theses of the INTERNATIONAL GAS CONFERENCES EVERY TIME BELOWSES A CONFIRMATION, THAT TIME OF EASY OIL IS ENDED // GAZPROM NEFT official website [Electronic resource]: article from the Internet, 2012. - Access mode: http://www.gazprom-neft.ru/press-center/sibneft-online/archive/2012-september/1103786/?sphrase_id=507594, free (the date of the appeal 30.05.2016). - Title from the screen.