The ballad of the tank M3 "Lee / Grant." Creation history (part one)

July 4 2016
24
The United States entered World War I only at its very end, which gave them many different benefits. But the US military believed that the war would continue until 1919, and from this followed the logical conclusion that they would need to win Tanks: both heavy breakthrough tanks and very light tanks - “cavalry”. British Mk vehicles met the first requirement, while the second - light French FT-17 tanks. On their basis, American engineers (along with English) developed and then launched the Mk VIII tank - in fact, the crown of heavy tank building during the First World War, and then the very light and miniature two-seat tank "Ford M 1918", known in Russia as the "Ford Z-ton." Both the one and the other designers created, taking into account both their own combat experience and the experience of the British and French. Knowing the capabilities of their industry, the Americans did not stand on ceremony: they immediately ordered 1500 Mk VIII tanks, named "Liberti" (Liberty) or "International" (International), since this tank was created on two continents at once, and an entire armada of 15 Ford M tanks 000. " But by the time the armistice was signed, only one Mk VIII tank and only 1918 Ford M 15 vehicles managed to make it. After that, their production ceased, and why is understandable. 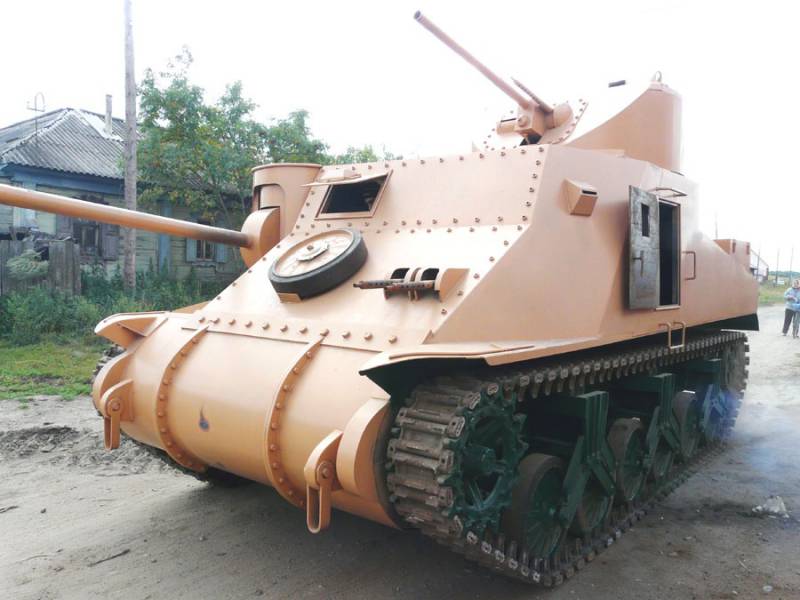 The M3 tank is the work of the late Vyacheslav Verevochkin. There lived a man like this in Russia, at home, with his own hands creating tanks “on the go” and with the quality that you see in this photo. But ... people on planet Earth, unfortunately, are dying. Although on the other hand, what is created by their hands remains.

General Rockenback made an attempt to reorganize the tank units of the US Army so that they become an independent branch of the military. His proposals were supported by such military commanders as George Patton, Sereno Brett and Dwight Eisenhower. But ... the majors are the majors. Then nobody listened to them. Moreover, in 1920, the United States Congress adopted an important document - the National Defense Act, which prohibited the creation of tank units as a separate branch of the military. Well, those tank units that already existed were transferred to the infantry.
However, new machines were developed, built, and tested. For example, in 1930 an experimental T2 tank appeared. With a weight of 15 tons, which corresponded to the assignment issued by the military, a powerful aviation motor "Liberti" in 312 hp This tank was armed as follows: a 47 mm cannon and a heavy machine gun in the hull, and a 37 mm cannon and another coaxial rifle machine gun were mounted in the turret. The tank featured an engine in the front and a “door” in the back of the hull, like the British had on the Vickers Medium Mk I tank, so it was very convenient to climb into this tank. 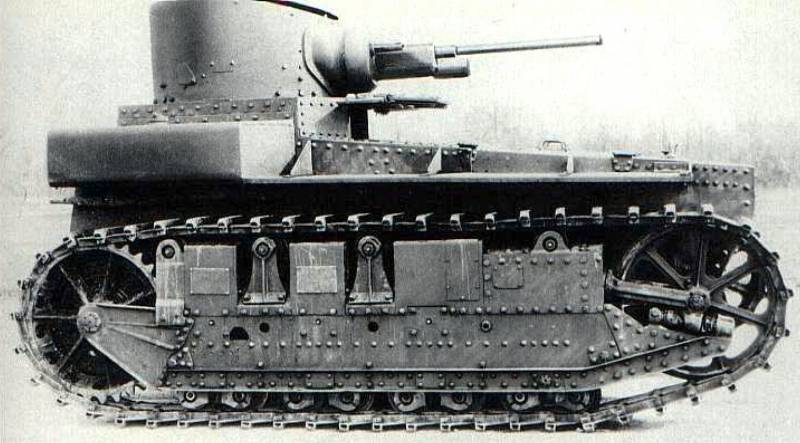 Indeed, outwardly, he was very similar to the English medium 12-ton tank "Vickers Medium Mk I", and in fact he was chosen as the promising prototype of the future US medium tank. Built tanks went to a mixed mechanized unit at Fort Eustis in Virginia. This experimental unit consisted of military vehicles, cavalry and artillery on a mechanical thrust. Then another tank unit was created at Fort Knox in Kentucky. But all these experiments did not give any real results.

At that time, John Walter Christie, a talented designer of armored cars, worked in the US, as an “eccentric” —as the American military nicknamed him, a man with all his talents, and maybe just because of them, he was very unsociable and extremely keen. He proposed to the Department of Armaments a number of samples of its wheeled-tracked tanks and self-propelled guns. Army officers, distinguished by their traditional incredulity, purchased from him only five tanks to participate in military trials, but after them his cars were rejected. Although the designs of Christie in other countries have found their second life! His ideas were used in England, the USSR and Poland. As is known, it was in the USSR that around 10 thousands of wheeled-tracked tanks of various modifications were produced, starting with the BT-2 and ending with the diesel BT-7M, which were based on the design of the Christie tanks. After all, even on the legendary T-34 was his suspension. And it was also used on all British cruiser tanks, including the Covenanter, the Cruzadeer, the Centor, the Cromwell and the Comet. 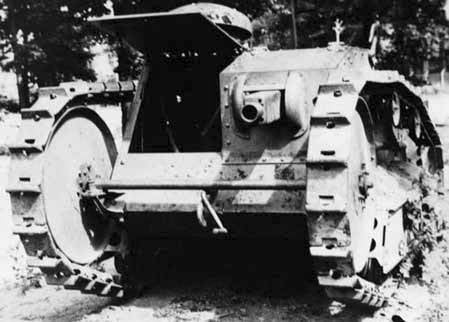 So, in a long search, 30-s have passed. It was built a whole family of medium tanks TZ, T4, T5 and also their modifications, but none of these machines went into the series. 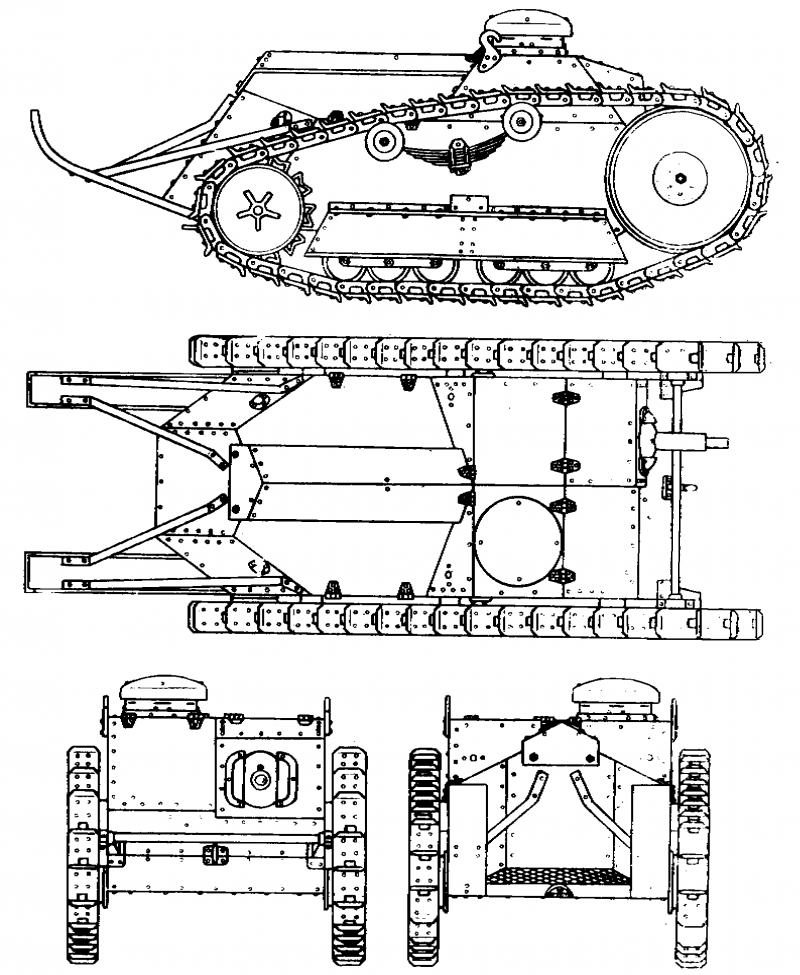 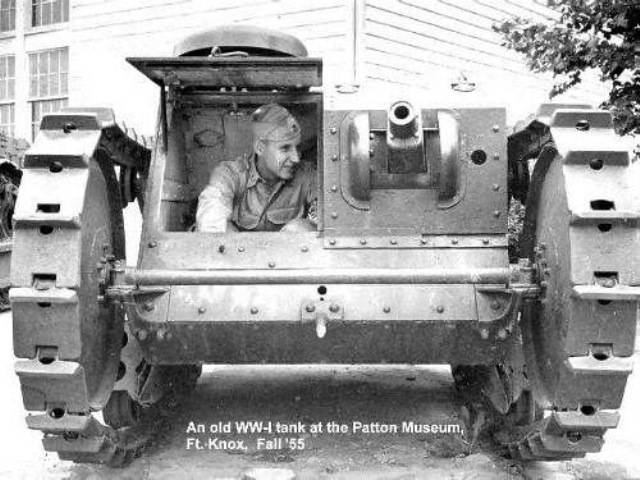 This photo gives a clear example of how closely it was in this tank.

But then came the 1 of September 1939 of the year and the Wehrmacht’s tank wedges for some 18 days passed through Poland and met with the same arm wedges of the Red Army, which entered Western Ukraine and Belarus, on the other side. And the further war in Europe, which ended with the rapid defeat of the French army and the catastrophe at Dunkirk, vividly showed the United States that the war was on the threshold, and that it would not be possible to sit out across the ocean. It means that we will have to fight seriously. And how can you fight without modern tanks? 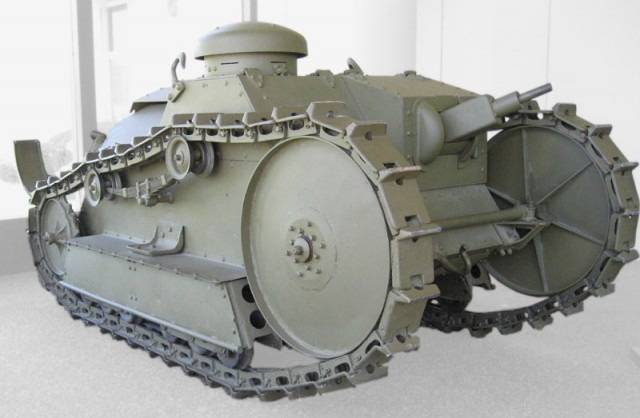 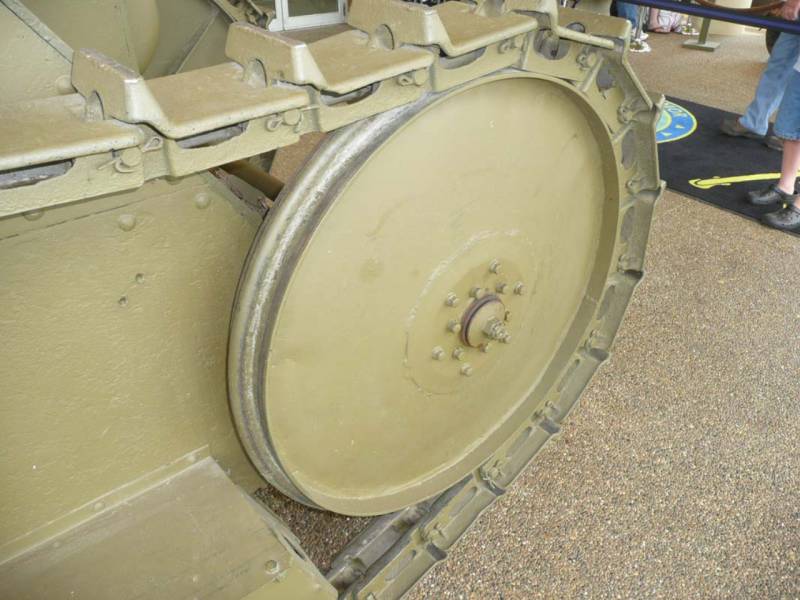 And here at once all the US military and senators saw the light and saw that their country was very far behind in the development of their tank forces. Actually, they simply do not. That's how it is! And because the reaction to this was followed very quickly. As early as July 1940, General George Marshall and General Staff issued an order to General Edna R. Chaffey to remove all armored units from infantry and cavalry formations and to form two tank divisions together with support battalions at once. June 30 The National Army Development Program is adopted on 1940, and on July X, General Chaffey began to form new armored units. All tanks were released to him and no one else. To arm the new divisions, it was planned to immediately release 10 tanks, while the release should have been 1000 vehicles per day. 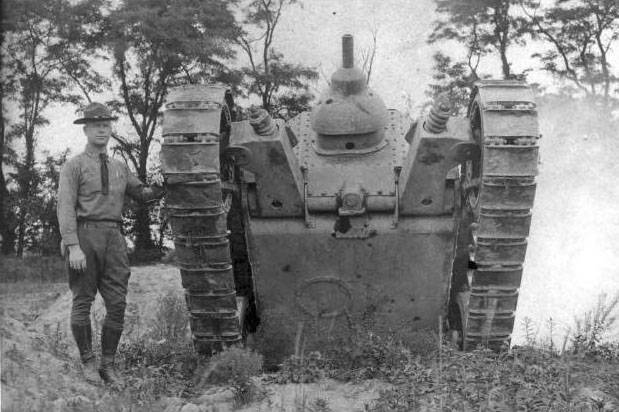 The medium tank M2А1 of model 1939 of the year, which was an improved version of the tank M2, was urgently adopted. The car was designed by the Rock Island arsenal and was a further development of the same experienced T5 tank. Weighing in 17,2 t, the M2 had one inch thick armor protection (25,4 mm), armed with the 37-mm M6 gun and seven (and one more spare) 7,62-mm “Browning” M1919 A4 machine guns, located around the entire perimeter of the hull, as well as in the tower. The Wright Continental R-975 engine had nine cylinders and power in the 350 hp, which gave the tank a speed of 26 mph (or 42 km / h). М2А1 received armor 32 mm thick - as a matter of fact, like in German tanks, a larger turret and engine in 400 hp Weight increased, but the speed remained the same. Nevertheless, all these tricks did not lead to any particularly positive results: the tanks remained old-fashioned, had high straight sides and were not very well-armed for the cars of their class, since the army had already produced light MXXUMX tanks with exactly the same 2 -mm gun and quite powerful machine gun armament. 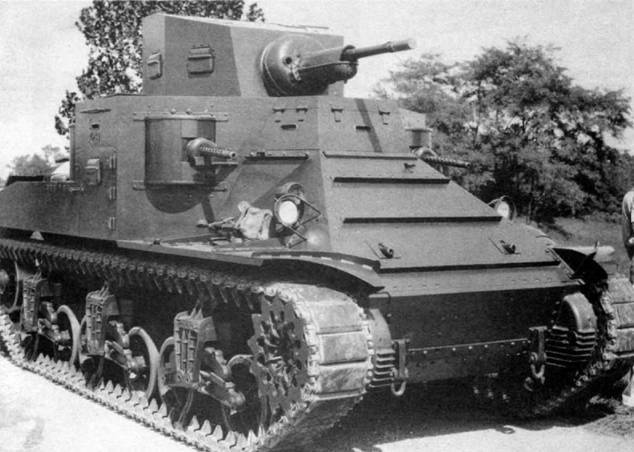 Medium tank M2. Interestingly, the tank had a crew of 7 people: the driver, the commander-gunner, loader and 4 machine gunners. Moreover, the tank attached two tripods for machine guns - remove, install and fire from the ground and there were two hatches on the roof of the sponson and two pins for machine guns and anti-aircraft fire! The tank had seven machine guns! Record amount for single-turreted tank. Five could fire simultaneously on the course!

In June, Lt. Gen. William Nadsen, 1940, who founded the General Motors Corporation and KT Keller, the president of the Chrysler corporation, who part-time led the national defense program, agreed that they would not release M2X1 at their facilities, since this requires a complete restructuring of the entire production. They decided that they would earn much more on the production of cars for the army. They decided to transfer the order for the tanks to two concerns: “American Locomotive company” and “Baldvin.” But then, quite unexpectedly, the Congress allocated for them producing 21 million dollars, including financing and building a new tank factory, then KT Keller hurried to reassure General Wesson, the artillery commander of the US Army, that his corporation was ready to produce any tanks, and it was agreed that an 18 tank would be produced in 1741 months. Thus, Chrysler received the entire month of 4,5 to restructure its production and to present the construction project of an independent arsenal from other suppliers.

Then it was like this: in Rock Island, two M2А1 experimental machines (different from the base model with inclined tower armor) were built, and General Wesson allowed the Chrysler engineers to study them, which was done. And not just done: the engineers did everything what was required for their company to manufacture these tanks! As early as July 17, the 1940 of the Chrysler company’s M2А1 was estimated at 33,5 thousand dollars. This price artillery committee adopted as a "floating". Then, over the month, the contract was carefully worked out and 15 August was already signed. The 1000 tanks M2А1 company had to transfer to the US Army by the beginning of August 1940, and their production was to begin no later than September of the next 1941 year. This period was designated by the concern "Chrysler" itself, having considered one month to be quite a sufficient period to prepare for the release of a new product.

First, "Chrysler" made two wooden layout M2А1 according to the drawings, which were obtained from Rock Island. But already 28 August 1940, the army canceled the old order for 1000 tanks М2А1, despite the fact that they did manage to make 18 units. Some of these tanks were sent ... to Western Sahara. Find information about their participation in hostilities failed. It is known that in 1941, one of the tanks received a flamethrower instead of a gun, and a tank with a combustible mixture was installed on it in the stern. The machine was assigned the index M22, but it remained a prototype. 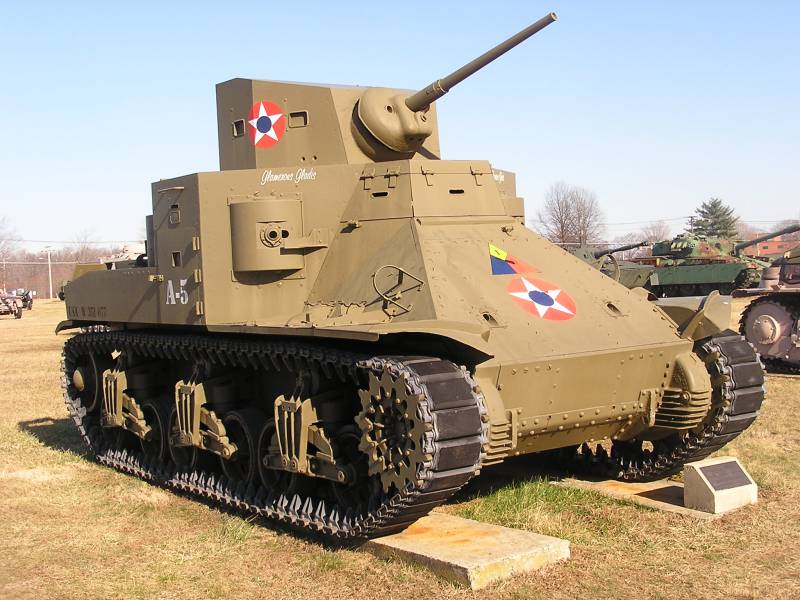 At that time, the discussion on the possibility of arming the M2A1 75-mm cannon (which, by the way, was envisaged in the design of the Т5EXNNXX tank), ended, and by its results a completely new and "unplanned" tank was created. The design department of the Aberdeen Proving Ground prepared all the necessary project documentation in just three months. The tank was given the designation M2 and the proper name is "General Lee", in honor of General Robert Edward Lee (3-1807), which during the Civil War of the North and South 1870-1861. in the USA he was commander-in-chief of the southerners army. 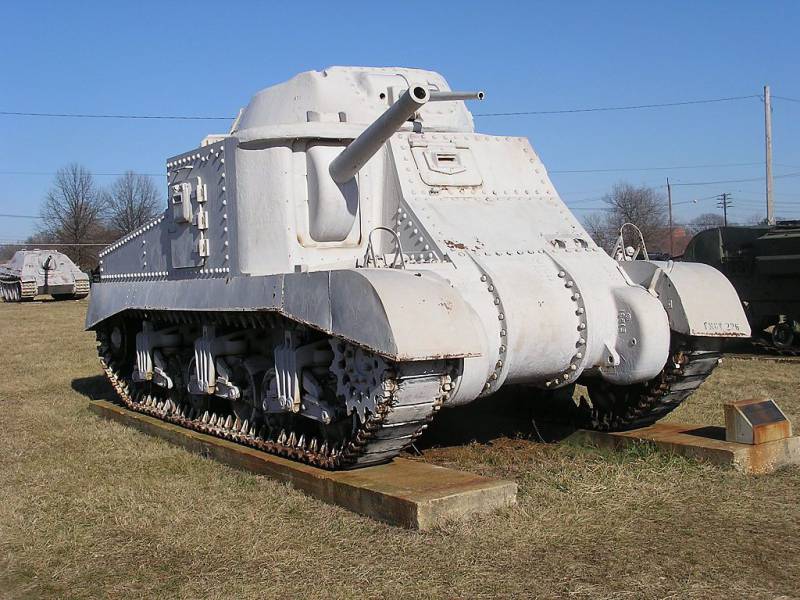 The creators of the M3 tank placed the 75-mm gun in the onboard sponson in the right side of the hull, like on the French tank "Schneider" of the First World War. It was the simplest solution, since the installation was like ship's guns, the machines to which were well worked out. In addition, the 76-mm gun installed in the tank was very powerful, and the designers were not sure whether it would work well in the turret. This showed a certain amount of uncertainty of American designers and in their abilities, but in addition also unwillingness to abandon the usual views on tanks, as on mobile pillboxes that were supposed to fire, standing motionless. Above they installed a cast rotating turret, sliding it to the left, and in it they installed an 37-mm gun, pairing it with a machine gun. A small turret on top also received a machine gun, which the tank commander could use both for self-defense from infantry and for firing at aircraft.