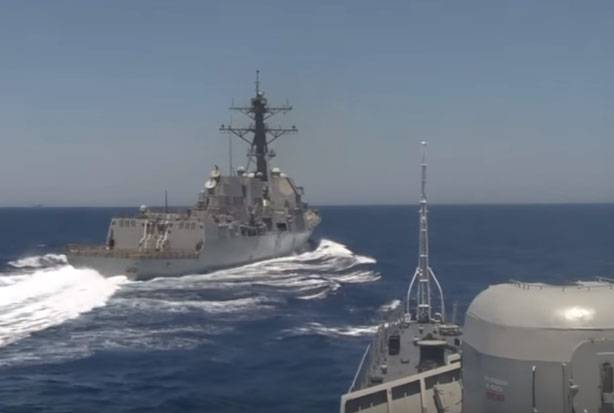 After several days of meditation, the Pentagon decided to issue its own interpretation of the events. According to the top of the American military department, the Yaroslav the Wise outposts allegedly deliberately tried to interfere with the actions of the American aircraft carrier Harry Truman, which was accompanied by the very same destroyer Gravely.

American portal Defense News Publishes a statement from the Pentagon spokesman, referring to the Gravelly commanders:
He (“Yaroslav the Wise”) tried to prevent the “Harry Truman” operation. The Russian ship approached the Gravely destroyer accompanying the aircraft carrier at a distance of about 300 m. At the same time, it was located approximately 5 nautical miles from the Harry Truman.

Further, the Pentagon claims that at Yaroslav the Wise they behaved unprofessionally, announcing via radio communications that space for maneuver was limited and that the corresponding signal flag was hung out.

That is, the logic is something like this: “we have shackled ourselves in the movements” ... Somewhere we have already heard something similar.

From the statement of the representative of the US military:
We are very concerned about the unsafe and unprofessional actions of Russian ships. Such maneuvers can exacerbate tensions between countries.

Ctrl Enter
Noticed oshЫbku Highlight text and press. Ctrl + Enter
We are
The American destroyer Gravely has dangerously approached the Russian watchdog Yaroslav the Wise in the MediterraneanAircraft carriers "Harry Truman", "Charles de Gaulle" and "Cavour" in the Gulf of Oman
Military Reviewin Yandex News
Military Reviewin Google News
88 comments
Information
Dear reader, to leave comments on the publication, you must sign in.