"People are dying for the metal" 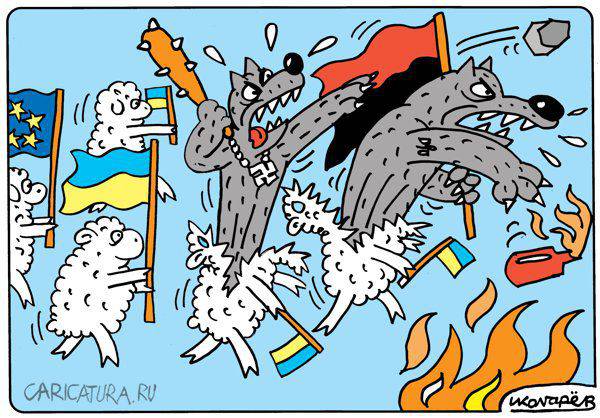 Is it possible to pity the enemy who came to shoot peaceful cities and kill their inhabitants, but he himself got a bullet? It would seem the answer is obvious. But what if the enemy is a talented opera singer? If he was born to conquer the scene, and not to shoot a machine gun? But aggressive anti-human propaganda contributed to the fact that he trampled his talent, betrayed Art and Song, became the killer of innocent people?

In the morning of June 29, a participant in the so-called "ATO" ("anti-terrorist", or rather, anti-human operation), a member of the "Right Sector" (organization banned in the Russian Federation), former opera singer Vasily Slipak, died in the Donbas.

Prior to that, he sang 19 for years on stage, tore applause in France, and one of his “crown” numbers was Mephistopheles' aria from the opera “Faust”. Either he played too much into evil spirits, or the propaganda of Bandera, which during the time of his youth sounded in his native Lviv region almost from every speaker and even iron, had an effect. But from a talented opera singer, Slipak, he retrained himself first as an ATO volunteer, and then as a real killer.

“People are dying for the metal, Satan reigns there,” - that is what Mephistopheles’s aria says in the Russian translation. Slipak even took the call sign "Mephistopheles". But his illiterate accomplices, in whose ranks he was, reduced this call sign to the short word “Myth” (well, how could they know how to spell the word “Mephistopheles”?). Although, perhaps, and this is symbolic - a man so succumbed to the myths that, talented from birth, so stupidly killed his soul ... And died for the metal.

But the reality is merciless - people are killed and injured at the hands of such “atoshniki” in the Donbas. A bullet or a shell does not ask whether a person is talented or not ...

27 June in the area of ​​the village of Shirokino, two DNR sappers were killed. Eight more - were captured. All the “guilt” of these people is that they cleared the territory so that women and children would not be blown up by the “gifts” generously scattered by the “atoshniki”. But the punishers opened fire on them, although they knew very well that these were no “militants”, since the Ukrainian side and the OSCE were notified of the work on demining. As a result, two fell on the spot, and the other eight were injured or contused.

Now they are in captivity, and the famous ukrofashist Dmitry Yarosh boasts that "a successful military operation was conducted." “54 reconnaissance of the Armed Forces of Ukraine - you are great. Combat Cherven, while screamers shout about love for the Motherland, you and your soldiers show this love every day at the front. Glory to the Heroes, ”Yarosh wrote in his blog.

28 June, Ukraine celebrated Constitution Day in a big way, although the junta in power is not compatible with the Constitution. Independence tramplers trampled the Constitution back in 2013 on the cold Khreshchatyk, they burned it together with the Trade Unions House, they shot it in the Donbas, and now they have satanic dances on its charred corpse.

In the morning of this day, residents of Donbass, who are still forced to use the services of Ukrainian mobile operators, received SMS with a rather cynical and mocking congratulation: “On the Day of the Constitution of Ukraine! Our country - “power!”

However, the most flagrant violation of the Minsk agreements lately, the Ukrainian side committed on the morning of June 29. Apparently, the fighters were "celebrated" at the Constitution Day. They began a breakthrough in the area Logvinovo near the city of Debaltseve and were able to move four kilometers into the territory of the DNR.

The army of the Republic was able to counterattack the enemy, and by the evening of the same day the Ukrainian Lytsari were thrown back from the occupied territories.

According to the Ministry of Defense of the DPR, "the act of aggression was carried out by the military of the 54-th separate mechanized brigade of Kiev."

That is - the same brigade that 27 Jun carried out a criminal attack on the sappers.

According to Eduard Basurin, the enemy lost during the aggression two infantry fighting vehicles and one armored personnel carrier.

The plenipotentiary of the DPR at the Minsk talks, Denis Pushilin, raised the issue of an attack on Debaltseve and a crime against sappers at a meeting of the Contact Group on resolving the situation in the Donbas. “We hope that the OSCE, after receiving all the necessary information, qualifies these events as a clear violation of the Minsk agreements,” he said.

Meanwhile, the Ukrainian junta, celebrating the Constitution Day, creates chaos not only in the Donbas, but also in the territories under its control. So, on this very day, an opposition politician, a deputy of the Verkhovna Rada of several convocations, a communist Alla Alexandrovskaya was arrested in Kharkov. At first she was searched, and then 68-year-old woman was seized on ridiculous charges: “separatism”, “encroachment on the territorial integrity of Ukraine”.

Aleksandrovskaya organized protests against the actions of the Maidan junta and was persecuted for it. Her son received numerous threats and was forced to leave Ukrainian territory. Now his mother was sent to jail.

"Satan rules the ball there."

Ctrl Enter
Noticed oshЫbku Highlight text and press. Ctrl + Enter
We are
Results of the week. "Aria of the Moscow Guest"Situational analysis of the death of the MH17 flight (Malaysian Boeing 777), made on the basis of engineering analysis from 15.08.2014
Military Reviewin Yandex News
Military Reviewin Google News
104 comments
Information
Dear reader, to leave comments on the publication, you must sign in.