Heroic championship of the Great Patriotic

July 3 2016
8
28 June 1941, two pilots of the Northern Front went to the ram, becoming the first Heroes of the Soviet Union during the war 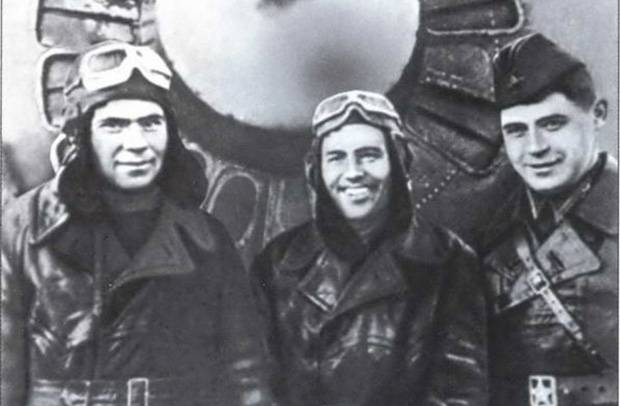 The Great Patriotic War gave the largest number of those awarded the highest award of those years: 11 739 people - men and women, military and civil, who fought on the front and behind his line, were awarded the title Hero of the Soviet Union. And the pilots of the 158 th Fighter Aviation Regiment of the 39 Fighter Aviation Division, who committed 28 on June 1941 on the Northern Front - Stepan Zdorovtsev and Peter Kharitonov, were the first to receive this title in the war years. After 10 days, July 8, they and their other colleague, Mikhail Zhukov, who committed the ram on June 29, were awarded the highest rank.

It is noteworthy that in stories awarding the highest award of the Soviet Union pilots secured a chronological priority. Recall that it was the pilots who participated in the ice rescue operation of the participants of the Arctic expedition of the Chelyuskin icebreaker, who were the first to receive this title. 20 April 1934, by the decree of the Supreme Council, the country's new highest award, established four days before, was presented to seven pilots participating in the Chelyuskin epic. The first Heroes of the Soviet Union in history were Mikhail Vodopyanov, Ivan Doronin, Nikolai Kamanin, Anatoly Lyapidevsky, Sigismund Levanevsky, Vasily Molokov and Mauritius Slepnev. Until June, 1941 people were awarded 647 high rank - mainly for battles in the Far East (Khalkhin Gol and Lake Hassan) and the 1939-40 Winter War. And then 22 of June burst out, and after only half a month the pilots were again the first among equals! - became the first heroes of the Great Patriotic War.

Judging by the meager data on the time of the feat, scattered over a multitude of studies and articles, chronologically the first was the ram Kharitonov. Although Zdorovets went first on that day, at about five o'clock in the morning on 28 July, he flew to intercept the enemy as part of the 3 squadron of the 158 th Fighter Aviation Regiment. Kharitonov rose into the air later (his link just replaced the link with which Zdorovets flew), but he met the target for his ram first.

... Stepan Zdorovtsev’s path to Aviation was very meandering. A native of the Rostov region, the son of a peasant, he was a classic Komsomol volunteer of the pre-war period. A graduate of the tractor and mechanical school in his native village, when his family moved to Astrakhan, he found a job in ship repair workshops, then he received a boatbuilder minder certificate, worked in the fishing industry, and from where he moved to OSVOD - Society for the Promotion of Water Transport and the Protection of People’s Life on the waterways. Responsible and calm, always ready to risk himself for the sake of others, he quickly became the head of the Astrakhan city rescue station OSVOD, and already in this position received an additional diver specialty. And then he replaced the salty ocean with an air one - in 1937, twenty-year-old Stepan Zdorovtsev, on a Komsomol ticket (the campaign under the slogan “Komsomolets - by plane!”), Was sent to study at the Astrakhan flying club. A year later, he was drafted into the army, and in 1940 a freshly baked graduate of the Stalingrad Military Aviation School arrived at his first duty station, in Pskov, where the 158th fighter regiment was based at the Kresty airfield, flying mainly on the I-16 fighter designer Nikolai Polikarpov. Very quickly he attracts the attention of the regiment’s command with his passion for the development of new methods of air combat, and a promising pilot is sent to the courses of flight commanders in the city of Pushkino. After graduating from them and taking part in the number of the best cadets in the air parade above the Palace Square, the junior lieutenant Zdorovtsev returned to his regiment, with whom he met on June 22 and began the Great Patriotic War.

Stepan Zdorovtsev gained his first air victory on the fifth day of the war. 27 June before the start of the patrol he received data from the regiment's command post about a German bomber approaching the airfield. Taking off, the pilot almost immediately found the enemy, already preparing for a bombing strike. But the German did not have time to bomb: the I-16 fighter caught up with him, came in from the top and shot down in a long line. And the next day, in the early morning, the duty link, which included Stepan Zdorovets, flew out to intercept the bombers, who were clearly aiming at the regimental airfield. Our pilots intercepted the “Yunkers-88” still on the approach and forced them to turn back, but could not knock down any. And as soon as he returned, Zdorovtsev received an order to fly again to intercept an enemy plane, apparently returning from the bombing. But the first attacks ended in vain: the German bomber maneuvered perfectly, all the while putting the Soviet plane under fire from its onboard machine guns. From the third approach, the fighter managed to shoot the enemy gunner, and the German remained unarmed - but it turned out that the last turn had exhausted all the ammunition. And then the pilot decided to go to ram. “My plane hit the tail of the Junkers with a propeller and cut off its steering wheels,” Stepan Zdorovets told afterwards. - The second method I chopped off the rudder of the enemy depth. The bomber lost control and flew down the stone. Two German pilots were parachuted. They were captured by our ground forces. Knocking down the enemy, I felt that my fighter strongly shudders. “The screw is damaged,” I thought, and stopped the momentum. Taking advantage of the high altitude, I began to plan in the direction of the airfield. So I flew over 80 kilometers and arrived safely at my base. ”

Pyotr Kharitonov - the same age as his brother-soldier Stepan Zdorovtsev (they were born not just in one year - 1916 - but also in one month, only Peter was eight days older) - also came to aviation in a difficult way. A native of the Tambov region, he managed to work as a carpenter after school, then graduated from a pedagogical course and became a primary school teacher in Ulan-Ude. In 1934, the flying club opened in the city, and (remember, at the height of the campaign “Komsomol member - by plane!”), The young teacher, having finished his lessons, becomes a student himself - at the flight instructors. At the end of 1937, Kharitonov receives a certificate of completion of training at the flying club, and in 1938, he is called to the army and sent to military science at the Bataysk military aviation school of pilots, which a year later received the name of Hero of the Soviet Union Anatoly Serov - one of the most famous pilots of the Spanish Civil War. In 1940, the young fighter pilot is promoted to lieutenant rank and assigned to the 158 th Fighter Regiment in Pskov.

Since 22 June, Peter Kharitonov, like all the other pilots of the regiment, begins combat sorties - but he only happened to meet 28 June in battle. And in his first combat mission, he becomes a hero! And, as the pilot himself admitted, unwittingly. “I patrol on the“ Donkey ”(fighter I-16. - Ed.), I see a single Ju-88. Attacking and aiming at the gas tank. But do not shoot my machine guns. And suddenly - what the hell! - the enemy, fuming, goes down. I reload the machine guns and attack again. Again, the machine guns are silent, but the fascist keeps on reducing, leaving behind a line of smoke behind the tail. I guessed that they turned on the afterburner motors, they want to deceive me, imitate, as if the plane had been hit and it was about to collapse. Well, I think it was not attacked. I’m going to attack one more time and I see that the bomber leveled off me in 50-70 meters and goes to where I came from. I got angry scared and decided to ram. Crawled to the tail of the Junkers. The distance shrinks with every second. He slowed down, figured out where to hit better, and with a screw he cut off the rudders. At this point the bomber really went to the ground. Three of the crew burned, the fourth jumped out with a parachute, and was taken prisoner. He showed: the crew consisted of experienced aces, for the bombardment of the cities of England and France all had Iron crosses. Well, I, as they say, landed on my homeland without a loss. ”

A day later, on June 29, another pilot of the same 158 regiment - junior lieutenant Mikhail Zhukov made a ram. As the chief aviation marshal Alexander Novikov, who was in command of the Northern Front air force, later wrote in his memoirs, “a day or two after the ram attacks of Zdorotsev and Zhukov I reported ... about three heroic fellow soldiers and offered to submit them to the title of Hero of the Soviet Union ". The submission was supported, and on July 8 of the year 1941 was published a decree of the Supreme Council awarding the three pilots of the 158 regiment the title Heroes of the Soviet Union. They learned about the award on the same day from the newspaper Pravda, where their portraits were placed, next to them is the decree of the Presidium of the Supreme Soviet of the USSR, and below - the poem by Vasily Lebedev-Kumach “The First Three”:

“Healthy, Kharitonov, Zhukov!
The whole country is hugging you!
And everything from grandfathers to grandchildren
Prove native names.
Let the ranks of heroes multiply,
Let our thunder days
Everyone fights like these three
And win like they are! ”

The subsequent military fate of the three heroes was different. Stepan Zdorovtsev died the day after the award, July 9: returning from reconnaissance his plane was intercepted by several enemy fighters. Mikhail Zhukov killed 12 on January 1943 of the year in an unequal fight with nine Germans: the projectile hit the gas tank. Peter Kharitonov 25 August 1941 of the year made his second ram, for which he was awarded the Order of Lenin, and a couple of weeks in the next battle he was severely wounded, returned to service in 1944, fought before the Victory and resigned ten years after her in the rank Colonel Aviation.

Ctrl Enter
Noticed oshЫbku Highlight text and press. Ctrl + Enter
We are
Air ram is not only a weapon of Soviet heroesRussian air combat that scared the Luftwaffe: rams
Military Reviewin Yandex News
Military Reviewin Google News
8 comments
Information
Dear reader, to leave comments on the publication, you must sign in.