"Man without a shadow": how the Soviet intelligence became a TASS translator 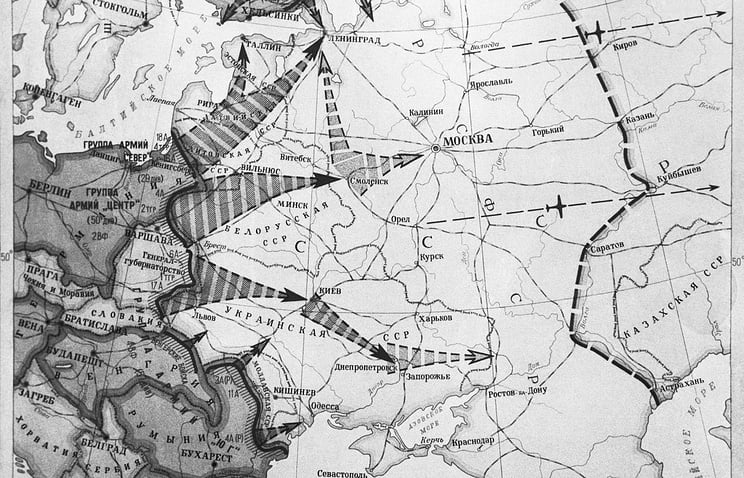 18 December 1940 of the year, six months before the war, Hitler signed the directive №21 of the Supreme Command of the Wehrmacht, which received the provisional name "Barbarossa Option" and became the main governing document in the war against the USSR. According to the directive, the German Armed Forces were assigned the task of "crushing Soviet Russia in one short-term campaign." The first person to report the details of this German plan to Moscow in 1941 was Jan Chernyak.
In Soviet times, for many, he was a simple translator at TASS, living in a one-room apartment and getting to work on the subway. And only a few knew that Jan Chernyak was a legendary scout, whose history helped in creating the image of Stirlitz. In addition to transmitting information about the beginning of the war, he also contributed to the victory at Kursk in 1943, and after the war he managed to obtain American nuclear weapons.

From the TASS dossier
The personal file No. XXUMX of Jan Petrovich Chernyak is kept in the personnel department of the TASS information agency. In the autobiography there is no word about the illegal past. Although he reported that during the war he carried out special tasks of the Soviet command in the rear of the enemy.
In recent years, quite a few publications have appeared on Chernyak's intelligence activities. How reliable they are is difficult to judge. Scouts, especially illegal immigrants, both during life and after death are always accompanied by legends.
Ian Cherniak was born in Chernovitsy, in Austria-Hungary (now Chernivtsi, Ukraine) in the family of a small Jewish merchant married to Magyarks. Parents went missing during the First World War. At the age of six, an orphan was assigned to an orphanage in Kosice.

In the native places of Chernyak, in Northern Bukovina, which was then part of Austria-Hungary, there lived representatives of very different nationalities. A small and talented boy absorbed this jumble of tongues like a sponge.
In 16 years he already spoke in six languages: Yiddish, German, Czech, Magyar, Romanian and Ukrainian. In the Prague Technical High School he began to study hard, as he later wrote in his autobiography, English. Many years later, when Chernyak came to Moscow for the first time in 1945, he would learn Russian. His autobiography for personal files in TASS was written without a single mistake.
After graduating from college with 1931 to 1933, he worked as an engineer-economist for a small plant, Prager Electromotiveneverke. And then, when the plant closed, I was unemployed for two years and earned my living by private English lessons.
Various sources claim that since the beginning of the 30 of the last century, he studied at the Polytechnic Institute in Berlin, where he joined the Communist Party of Germany and after meeting with a representative of the Soviet military intelligence signed an agreement to work for it. In addition, in 1931-1933, he allegedly served in the Romanian army, in the headquarters of a cavalry regiment in the rank of sergeant, had access to secret documents and transferred their contents to the Soviet Union.

According to the same sources, after retiring from the army, Chernyak lived in Germany, where he established his first reconnaissance group, and in 1935-1936 he studied at the intelligence school in the USSR under the leadership of Artur Artuzov, the former head of the OGPU-NKVD Foreign Department, and at that time Deputy Chief of the Fourth (Intelligence) Directorate of the General Staff of the Red Army, met with the Chief of Intelligence of the Red Army Army Commissar of 2 rank Yan Berzin.
Then he went to Switzerland under the guise of a TASS correspondent with the operational pseudonym "Jen." And since 1938 of the year after the signing of the agreement that went down in history as the "Munich Agreement", he lived in Paris, and from 1940 of the year - in London.

FROM BLUEBER'S AUTOBIOGRAPHY
From February 1935 of the year to November, 1938 worked as a translator in the library of higher technical institutions in Prague, and then went to Paris, where before his occupation by German troops he also worked as a translator. After he moved to Zurich, where he again gave English lessons in private. With the start of World War II and the "attack of German troops on the USSR, he began active work in the enemy's rear, where he performed special tasks of the Soviet command (July 1941-th - December 1945-th). In December 1945 came to Moscow and in May 1946 received Soviet citizenship. From May 1946 to February 1950, he worked as an Assistant of the Department of the General Directorate of the General Staff of the Armed Forces of the USSR ".

Reliable "Krona"
As early as before the war, from 1936 to 1939 a year, according to data from open sources, Chernyak created a powerful intelligence network in Germany, which had the code name “Krona”. All this he did during the short raids in this country.

Chernyak was able to recruit over 20 agents, whose work he managed from abroad through messengers. At the same time, none of his agents have ever been exposed by German intelligence, even today nothing is specifically known about most of them.
Among the informers Chernyak were: a major banker, secretary of the minister, head of the research department of the aviation design bureau, daughter of the head of the tank design bureau and high-ranking military.
Renowned Soviet rocket designer Sergo Gegechkori (son of Lavrentiy Beria) claimed that Olga Chekhova and Marika Ryokk, Hitler's favorite German actresses, were agents of Chernyak.

It was Chernyak’s agents who managed to extract a copy of the Barbarossa plan in 1941, and the operational plan of the German offensive near Kursk in 1943. And if in the first case Moscow did not attach due importance to the unique documents sent by the illegal, in 43 its multi-page reports made an important contribution to the defeat of the Germans near Belgorod and Kursk.
In addition, Chernyak transmitted to the USSR valuable technical information about tanks, including the "Tigers" and "Panthers", artillery guns, rocket weapons, missiles "V-1/2", the development of chemical weapons, electronic systems.
Only in 1944, this illegal sent to the country more than 12 500 technical documentation sheets and 60 samples of radio equipment. Veterans of the Main Intelligence Directorate claim that the intelligence network created by Chernyak was one of the best in the history of intelligence: there was not a single failure in the fifteen years of his work abroad.

Hitler’s counterintelligence was unable to reach the Krona informants. Nor was she able to identify its leader, Jan Chernyak, who was called "a man without a shadow." He never left a trace behind him.
Chernyak's work did not end after the war. He made a great contribution to the creation of Soviet atomic weapons. Information about the creation of new weapons by the Americans he initially obtained in the UK, and then, having moved on instructions from his leadership to Canada and the United States, he sent thousands of sheets of technical materials and even a few milligrams of uranium-235 to the Union to manufacture an atomic bomb.
After returning to the USSR, he continued from time to time to travel abroad. This was already during his work as a translator in TASS. The purpose of his visits is still unknown.
What got Stirlitz

Chernyak is not a prototype of Stirlitz. He did not serve a single day in the German army. Because of his non-Aryan origin, he could not even dream of making a career there and joining the leadership team of Hitler's Wehrmacht. Nevertheless, he had his informants there. This knowledge, as well as Chernyak's general intelligence experience, was useful to the writer Yulian Semenov while working on the book Seventeen Moments of Spring.
At the same time, neither the family nor the colleagues of Chernyak in the translation department of the main editorial board of foreign information of TASS had any idea of ​​his unusual biography.
Hero of Russia
Many Soviet illegal intelligence officers who returned to Moscow after the end of the Great Patriotic War ended up behind bars. They were charged with treason, and in fact they blamed someone else for the failures of the initial period of the Patriotic War. Jan Chernyak happily escaped both the charges and the "cellars of Lubyanka".

Chernyak worked at TASS for almost 19 years and went on a well-deserved rest when he turned 60. He was awarded the medal "For the Victory over Germany" and the Order of the Red Banner of Labor (in 1958 year). He did not receive any awards for materials delivered from the United States on the atomic project, as well as other military achievements.
The feat, accomplished by an illegal scout, was truly appreciated only at the end of his life, already in new Russia.
14 December 1994, when Jan Chernyak was in serious condition in a hospital, was awarded the title of Hero of the Russian Federation by the decree of President Boris Yeltsin.
It is said that in February 1995, remaining in the hospital ward after being awarded one-on-one with his wife, he woke up and, clutching the Golden Star, whispered: "Well, that is not posthumous ..."
19 February, Jan Chernyak passed away.

Ctrl Enter
Noticed oshЫbku Highlight text and press. Ctrl + Enter
We are
So was going to file illegalDiplomats of the People's Commissariat of Defense: on the eve and during the war
Military Reviewin Yandex News
Military Reviewin Google News
5 comments
Ad