Deceit and love. What does Erdogan want?

30 2016 June
42
The Turkish president made a smart move. In a short time, just a couple of steps shook the political "swamp" in Europe and even in the world. Two days political analysts and journalists speak about Erdogan’s letter to Putin. Two days the most popular thing in this environment is the coffee grounds. In this substance, it is believed, everyone can guess. 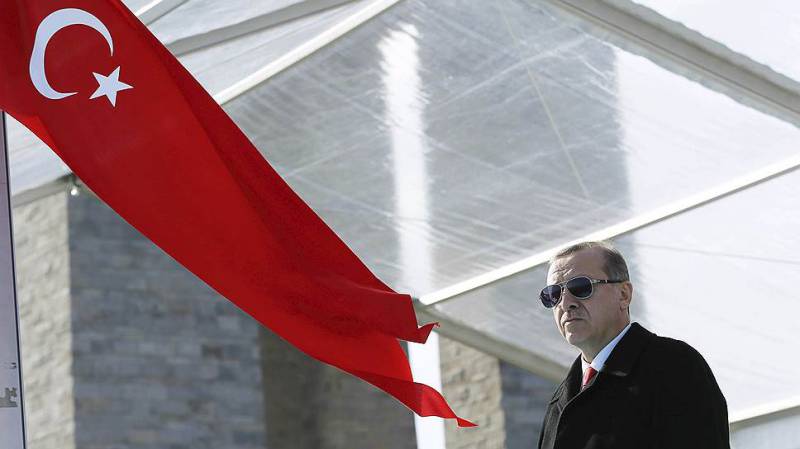 Erdogan’s actions do cause some shock. The longstanding conflict between Turkey and Israel was suddenly resolved. The months-long conflict with Russia is also at the resolution stage. And on the contrary, the almost come true dream of the Turks to become European Union failed miserably. Moreover, even the question of visa-free regime is not resolved.

I will not restrain myself from the general euphoria. Why, the great victory of Russian foreign policy! And a victory unexpected for the politicians themselves. And does it happen? And is there a reason for "distributing elephants"? This is what I want to reflect on today.

Turkey is the most at war with Russia. According to some experts, we are constantly fighting for about 65-67 years! What just was not the reason for these wars. And the Crimea, and the Balkans, and the Caucasus. In other matters, in fairness, Turkey was not always the initiator of such wars. We also have a stigma in the gun.

Turkey is the only country about which, according to Mikhail Zadornov’s apt expression, we can say, like about Russia, - Aziopa. A country whose geopolitical position simply obliges to become a bridge between Europe and Asia. In addition, the Turks, like us, are the heirs of the empire. So, somewhere deep down they have claims to restore their political weight in world politics.

Between us today is human life. More precisely, his death. Moreover, let me remind the reader of one of the first statements by President Putin. Backstab! Speaking to others, not in a diplomatic language, on the part of the Turks, we received treachery. A betrayal that is not forgiven. There is nothing worse than the betrayal of a friend. But this is how we perceived Turkey for many years.

I will try to consider the general situation around Erdogan. There is practically no neighbor of this country with which the Turks would maintain good neighborly relations. All enemies. NATO bluntly declared its unwillingness to participate in the Russian-Turkish "showdown." The European Union, as I wrote above, is also doing everything to prevent the Turks from entering its territory. Israel, too, is looking dubiously at the suddenly bursting friendship. There will be no refusal to cooperate, but he doesn’t have much confidence.

But the worst thing for Turkey is the cooling of relations with the United States and the almost complete cessation of relations with Russia. The Americans switched to direct assistance to the Kurds. Russia is actively helping Assad. In addition, there is help to Iran.

What awaits Turkey in the future? Why did Erdogan finally go to apologize to the family of the deceased pilot? By the way, this is exactly what is written in the letter. In the part that is published. I did not see any words of apology to the president. And to the people of Russia, too.

And the letter to President Putin has now become a detonator precisely for the radical actions of these forces. It seems to me that those who considered Erdogan a Turkish nationalist will now take active steps to overthrow the president. Given the nature of these people, mass terrorist attacks in various parts of the republic should be expected. It should wait for the growth of civil war.

Thus, today the most decisive and unpopular measures within the country are needed. Before the introduction of martial law. Otherwise, we will soon get a new state - Kurdistan. And on the rest of the territory there are several quasi-states of local "sultans".

The only question that is important today for Erdogan is the restoration of economic relations with Russia. Hundreds of billions of dollars, which Turkey will not receive this year, turned into a mine under the chair of the President of Turkey. This is not a small business that just quietly dies. These are large structures for which it is quite possible to buy a small army. In addition, Turkey needs to enlist Russia's support in the field of defense and security. As Syria has shown, it is Russia today that is able to really fight terrorism. The rest, alas, more imitate the struggle.

For Russia today, several aspects are important. First of all, Syria. As long as Turkey is on the side of the opponents of Assad, there can be no talk of normalizing relations. Only the complete cessation of confrontation and the cessation of military assistance to terrorists. In other words, Turkey should abandon attempts to become a regional player. And this demand will be made. And without discussion. Or...

The next demand should be the cessation of pressure on Azerbaijan on the issue of Nagorno-Karabakh. The conflict that smolders there is not needed by anyone. However, it is Turkey that constantly pushes Baku to solve the problem by force. Fortunately, the leadership of Azerbaijan has some political and economic sovereignty and political will.

Finally, what Erdogan has done today is not enough to normalize relations. Russia will not believe the claims of the Turks. We need specific cases. Including material compensation. And the Turks need to do this urgently.

On the whole, the victory, about which the “fighters for the good of the common people” so enthusiastically say, can be Pyrrhic. But only if Russia, according to our tradition, "enters the position of the poor" and does not demand it. And do not shout today about restoring relations, about the possibility of relaxing in Turkish resorts, about Turkish “tomatoes” at last.

When you cling the leg to the nail, you need an instant for a hole to appear. But darn is a pretty long process. But even with quality work your pants will never be the same as before.

For now, it should be understood that today the dialogue is just beginning. Only dialogue. And it is doubtful that the Turks agreed immediately to the conditions put forward by Russia. And there is no other way to establish peace in the region. Putin is always consistent in his actions, and it is problematic to “persuade” him to abandon his words.