30 2016 June
48
White House spokesman Eric Schulz told the world about Russia's “maximum isolation” for all the latest history. This result was brought about by the well-coordinated policy of the West, which introduced restrictive measures against Russia. Mr. Schulz believes that the merit of “isolation” belongs to the “international leadership” of President Obama. 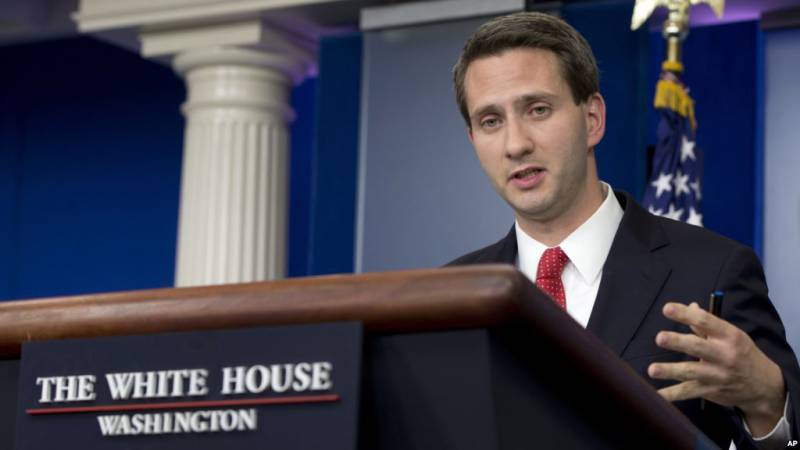 Thanks to the policies of the West and the imposition of sanctions, Russia has found itself in the utmost international isolation “for all of recent history. This was announced at a briefing by Eric Schultz, a representative of the White House. The full record of the press conference was made public on the official YouTube channel Administration of the American President (briefing on the record starts at 1 hours. 11 minutes).

Mr Schulz noted that “thanks to international leadership” of Barack Obama, Russia is now “more isolated than ever in recent history.” According to the official representative of the White House, Western sanctions led to a reduction in the economy of the Russian Federation on the 1 / 6 part.

Schultz has doubts that the results of the recent referendum in Britain may affect the easing of sanctions against Moscow. Schulz believes that this is nothing more than “speculation” on the air. The representative said that Washington "does not expect" that this referendum could somehow affect "the lifting of sanctions."

Recall, about the results of the British referendum, recently spoke out the former US Ambassador to Russia Michael McFaul. According to him, Putin actually won on a plebiscite in Britain. He wrote about this in Twitter.

“Today it is a giant victory for the purposes of Putin’s foreign policy. Pay tribute to him ", - quotes the former diplomat "Lenta.ru".

According to McFaul, the victory of supporters of the refusal of British membership in the EU "serves his [Putin] long-term goals in Europe."

“Putin complained about the collapse of the USSR and the Warsaw Pact, so he is glad to see a split in European unity,” Mr. McFaul also noted.

As for the sanctions, which should be extended from July 31, the head of the European Commission Jean-Claude Juncker spoke about them earlier (June 21) in an interview with Euronews.

“At the moment it is absolutely clear that in June we will extend the sanctions. But over the next six months, we will continue monitoring to see if there is enough progress in implementing the Minsk agreements to lift some of the sanctions, ”Juncker quotes. "Lenta.ru".

There were explanations. “Simply put, the more implemented Minsk Protocol points, the fewer sanctions,” the head of the European Commission said.

Before Juncker, the same was said at the end of May by the President of the European Council Donald Tusk. According to him, which leads Newsru.com, EU sanctions against Russia will be extended to the full implementation of the Minsk agreements.

Also, we recall, in the declaration on the results of the G7 summit in Japan, the leaders of the G7 states also spoke in favor of maintaining the sanctions against Russia imposed after the annexation of the Crimea peninsula.

All these statements are confirmed by the fresh speech of the “main man” on sanctions in Europe - Angela Merkel.

Nothing stands in the way of extending sanctions against Russia, German Chancellor Angela Merkel said. According to her, to extend the restrictive measures, "unfortunately, it is necessary."

Following the meeting of EU Heads of State in Brussels on the evening of June 28, Frau Chancellor stated that she and the French President brought something to the attention of EU leaders: the extension of sanctions against Russia “is regrettably necessary.” He writes about it RBC with reference to The Wall Street Journal.

Merkel noted that the agreement on a cease-fire in the south-east of Ukraine has not yet been executed, and therefore there are no obstacles to the extension of the sanctions. “The extension of sanctions stops nothing,” she said.

According to her, the discussion of restrictive measures against Russia at the summit of EU leaders took a little time.

As the chairman of the European Council, Donald Tusk, noted, a broader discussion of the issue of sanctions and EU relations with the Russian Federation will be held in October 2016.

Recall that the current period of anti-Russian sanctions expires on July 31. Restrictive measures will be extended until the end of January 2017.

Earlier, Cyprus, Greece, Italy, Slovakia, and Hungary supported softening sanctions against Russia. But all their statements can be considered formal, empty political chatter. No matter what the local politicians say, they will be forced to follow the “general line” of the European Union - to put it simply, to submit to the majority. In addition, neither the Slovakia, Hungary, nor Cyprus with Greece have any influential position in the European Union, and they will hardly have any (especially the last two debtor states).

Some European politicians, who usually take an opposition position to the current government, are calling for a review of relations with Russia and the lifting or at least easing of sanctions. For example, in France, Marine Le Pen, who openly criticizes President Hollande’s political line, is advocating for rapprochement with Russia.

As for international isolation, a certain of its maximum, achieved “for the whole newest history”, about which Mr. Schultz spoke, seems to be still doubtful.

For example, the unpredictable Turkish President Erdogan (inclined toward autocracy and sultanism, by the way, to say the least) made an attempt to apologize to Russia for the fighter shot down last year during the proclamation of this very “maximum”. And, while the US is talking about isolating Russia, analysts indicatethat the state of international isolation ("undeclared") brought Turkey. By whom? Erdogan, of course. After all, he has long ruled the state.

And even in the advanced American press, for example, in The Washington Post, they write that Erdogan’s letter to Putin is that step that can open the way for relieving tensions in Russian-Turkish relations.

Who is “isolated” is not even a question.

It is also known the opinion of India, which is not at all eager to observe "isolated" Russia.

Analyst P. Sh. Raghavan пишет, for example: “For India, political, defense and strategic relations with Russia retain great importance. We do not want the cold war-style pressure to weaken this relationship by strengthening others. Some areas of interaction between India and Russia cannot yet be replaced by relations with any other countries. Cooperation with Russia strengthens our leverage in relations with other partners. ”

You can not ignore the Celestial.

The results of Vladimir Putin’s visit to China demonstrated a high degree of proximity between the two countries, said Foreign Ministry spokesman Hong Lei said on Monday. “The results of President Putin’s visit to China fully demonstrated the degree of closeness of current Chinese-Russian relations, as well as the unity of the positions of the two countries,” Hong Lei quotes RIA News".

According to the official representative of the Ministry of Foreign Affairs of the People's Republic of China, during the visit, the parties agreed to strengthen strategic cooperation and mutual trust in the political sphere.

With such an interaction, we add, it is rather difficult to speak not only about “maximum” international isolation, but about isolation in general. You can only talk about this or that effect of certain sanctions on the Russian economy.

Observed and commented on Oleg Chuvakin
- especially for topwar.ru
Ctrl Enter
Noticed oshЫbku Highlight text and press. Ctrl + Enter
We are
Results of the week. "This bad man will betray us at the first danger!"Situational analysis of the death of the MH17 flight (Malaysian Boeing 777), made on the basis of engineering analysis from 15.08.2014
Military Reviewin Yandex News
Military Reviewin Google News
48 comments
Information
Dear reader, to leave comments on the publication, you must sign in.