Why does Britain quickly leave the sinking European Titanic? 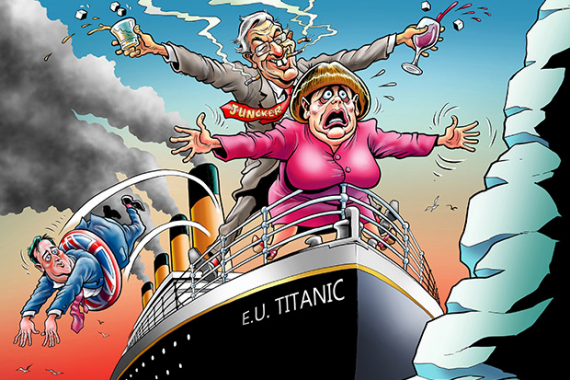 I, of course, “believe” in the triumph of Western democracy, but still not enough to regard the referendum held in Britain as merely an accident or an expression of the will of the subjects of the British crown.


At first glance, Brexit is not beneficial to anyone: neither London, nor Washington, nor Brussels. Even China made a special statement in which he explicitly spoke out against the UK leaving the EU.

However, "I am plagued by vague doubts" about the fact that local farmers and fishermen with their decision were able to confuse the cards to the world's leading players.

The first thing that catches your eye is Brexit’s powerful media support from the most prestigious and popular British newspapers: The Sunday Times, The Sunday Telegraph, The Daily Exspress, and The Daily Telegraph. The undisputed leader among the UK print media, the tabloid The Sun (circulation 1,7 million copies a day), as well as the largest online newspaper Daily Mirror (18,5 million readers per month) joined the Euroskeptic camp.

Observers at the referendum note that the cumulative audience of publications that supported the exit of Britain from the EU was significantly higher than those of the media that opposed Brexit.

What caused such an unprecedented propaganda attack on the inhabitants of Foggy Albion by the leading British media?

The fact is that even 8 April 2015, the European Parliament adopted a resolution supporting the agreement on the US-EU Transatlantic Trade and Investment Partnership (TTIP). The European parliamentarians were put under tough pressure by the Americans and the British, as well as personally by Angela Merkel. She even offered to give the future project a political touch. No wonder journalists immediately dubbed this agreement "economic NATO", which will be directed against China and Russia - the main geopolitical opponents of Euro-Atlantic countries.

In turn, British Prime Minister David Cameron joked cheerfully that he would “attach rocket engines” to the TTPI to speed up the signing of the treaty. However, unexpectedly, French President Francois Hollande makes a sharp statement that he will never allow the basic principles of French agriculture, culture and reciprocity access to an open market to be questioned.

In addition, Austria, Italy and a number of other European states, as well as influential business circles of the European Union, opposed this agreement. They were well aware that the TTIP agreement would act solely in the interests of international transnational corporations, which predictably deprive Europeans not only of economic, but also of political sovereignty.

It should be noted that, according to a public opinion poll, the overwhelming majority of the EU population strongly opposes the signing of an agreement on the Transatlantic Partnership. Mass protests were held throughout Europe demanding that the implementation of the TTIP be prevented.

The last nail in the coffin of the future agreement was hammered by the Dutch environmental organization Greenpeace, which 2 on May 2016 published 248 pages of documents prepared by negotiators in the strictest secrecy.

As a result of this scandal, European leaders, one after another, began to actively distance themselves from TTIP or vaguely declare more distant prospects. Evil tongues claim to stories with the leakage of secret documents, the ubiquitous Chinese comrades had a hand.

Whatever it was, but the Anglo-Saxon plan "A" to seize the huge European market suffered a crushing defeat. Of course, convulsive attempts by the Obama administration will somehow be made to save the situation, but it is clear that before the end of the presidential election in the United States, this is an absolutely dead-end path.

Plan B is already at the implementation stage, and at the first stage its goal is to cause a large-scale destabilization in the EU countries with the help of an unprecedented flow of refugees, which was successfully implemented.

A significant part of the refugees from Afghanistan, Libya, Iraq and Syria harshly hates the West for the terrible destruction that so-called “civilized” countries have brought to their land. How many trained ISIL and other terrorist organizations have infiltrated into Europe, God only knows.

With the competent work of the US special services, you can create a powerful terrorist underground, which at the right time will be used "in the dark" to achieve far-reaching plans. I think that I will not sin against the truth if I say that such events are already in full swing.

Indeed, in all the civil wars unleashed by the NATO countries in the above-named states, in the actions of the Americans, it would seem, there was absolutely no logic and rational approach. Instead of conquering markets with a more or less affluent population, they contributed to the erasure of entire cities, the destruction of the entire infrastructure, which inevitably gave rise to enormous flows of refugees to neighboring countries, and then to Europe.

I would not be surprised if in the next year or two the Americans will unleash a real civil war on the European continent with their hands, given the greatest concentration of the Muslim population in the richest EU countries, which are the main targets for the United States and the transnational corporations behind them.

And now guess three times, who will the Europeans first call for help? That's right, generous Americans will come to restore order, and at the same time they will offer for implementation a new Marshall Plan. Then the leaders of the European Union will agree to the most difficult and even humiliating conditions.

Today, the British are in a hurry to leave the sinking "Eurotitanic." I do not share the opinions of those who believe that the divorce process can be delayed for many years. Most likely, the events will develop rapidly and take no more than two years.

I would also like to draw attention to Premier Cameron’s strange behavior: first, he “accidentally” initiated the referendum ahead of time, then “accidentally” kept his word and, despite harsh criticism, held this ill-fated referendum. Then again, "by chance" urged the parliament to fulfill the will of the voters.

I think the process of leaving the UK from the European Union is already irreversible, and no petitions in support of the repeated referendum, as well as mass protests will not be able to influence this truly fateful decision. Although it can be assumed that if one day the European Union unanimously supports the TTIP agreement, everything will miraculously return to normal, and London’s loud spells about the age-old traditions of British democracy will give way to real politics.

PS For Russia, the withdrawal of the United Kingdom from the EU in the short term will have a lot of positive things, but this is a separate issue.

Ctrl Enter
Noticed oshЫbku Highlight text and press. Ctrl + Enter
We are
What you didn't want to know about EnglandInterview by President Bashar Al-Assad to the Sunday Times
Military Reviewin Yandex News
Military Reviewin Google News
130 comments
Information
Dear reader, to leave comments on the publication, you must sign in.