The Kalashnikov Concern is working on the RPK-400 machine gun

29 2016 June
83
Armed conflicts and numerous anti-terrorist operations of recent years have vividly proved the need for a light machine gun, which could be an addition to a single machine gun, and, if necessary, replace a heavy assault or sniper rifle. During the visit of Yuri Borisov, Russia's deputy defense minister, to defense companies in the Far East, the Urals and the Volga region, including the production sites of the Kalashnikov concern in Izhevsk, the media got pictures of a new Izhevsk light machine gun, known as the RPK-400. It is reported that the Kalashnikov light machine gun of the four hundredth series was developed in accordance with the requirements of the competition of the Ministry of Internal Affairs of Russia under the code code "Tokar-2". The machine gun is being developed in the interests of Rosgvardia, as well as various special purpose units, including the Security Service of the President and the Center for Special Purpose FSB of Russia.


The idea of ​​developing a light machine gun for an intermediate (automatic) cartridge is quite old. We can say that it originates from the 1943 of the year, when the cartridge of the 43 model of the 7,62x39 caliber mm appeared in the USSR. The winner of the competition held back in the war years was the machine gun of the Degtyarev design, which received the designation RD-44. In 1948 year after conducting tests in the troops and the necessary modifications weapon It was adopted by the Soviet Army under the designation 7,62-mm Degtyarev light machine gun or simply RPD. Automation and locking unit of this manual machine gun were borrowed from the machine gun Degtyarev (DP), and the mechanism of tape feed - from the famous German machine gun MG-42. The RPD was a successful, reliable and relatively light (7,4 kg) sample of small arms with a large ammunition - the ribbon box attached to the bottom of the machine gun contained 100 cartridges.

Soon enough, already in 1953, GAU decided to unify the machine gun and light machine gun, the result of this decision in 6 years was the adoption by the Soviet Army of a new Kalashnikov light machine gun, or PKK, which was unified with AKM. This work was carried out at the plant number XXUMX (as at that time was called “Izhmash”) by the designer group M. T. Kalashnikov with the lead designer V. V. Krupin. Beginning with the 74-ies, in the units of the motorized rifle, airborne troops and marine infantry, the RPD began to be replaced by the PKK. At the same time, the withdrawn from them light machine guns were sent to developing countries or transferred to warehousing.

It should be noted that as early as the middle of the 1970-s, under the Poplin theme in the Soviet Union, R & D was conducted in order to find a replacement for the PKK; The Soviet analogue of the famous Belgian FN Minimi, which received the designation PU-21 and was created by the design team of A.I. Nesterov, Yu.K. Aleksandrova, V.M. Kalashnikov (son of Mikhail Timofeevich Kalashnikov) and M.E. Dragunov, quite successfully passed the tests, but because of the “little things” - the lack of a reliable machine for equipping the tapes with cartridges of caliber 5,45x39 mm at that time - the project did not continue.

At NATO, the need for a similar machine gun was realized at about the same time when moving from a heavy 7,62-mm cartridge to a new 5,56-mm cartridge, which very quickly became the standard rifle cartridge of most countries of the military-political bloc (as well as many other states). The transition to the new cartridge provided the need for a new light machine gun under it. So the Belgian company FN began work on its development. The FN Minimi light machine gun, first shown in 1974, quickly gained popularity. 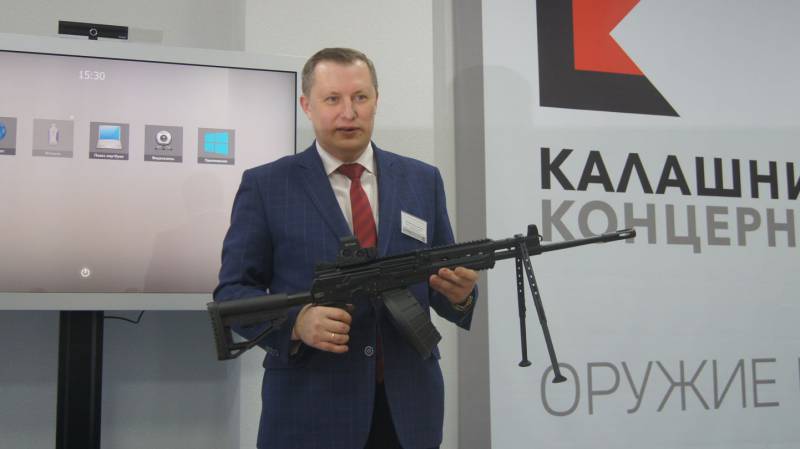 The transition to a new patron was due to the experience that was obtained during large-scale wars and local conflicts that were fought by the US and its Western allies in the 1960s in Southeast Asia, Africa, Latin America and the Middle East. This experience demonstrated the complete unsuitability of automatic rifles, designed for the NATO cartridge 7,62-mm, due to the large dispersion, especially when firing in continuous bursts. The increase in the accuracy of combat of existing at that time automatic rifles was associated with the transition of small arms to a smaller caliber 5,56 mm. Such a transition, in turn, gave significant advantages over small-caliber 7,62 mm weapons both in combat and maneuverability (a long direct shot range was maintained with a reduced recoil force) and in economic indicators. The positive results of the combat use of the new 5,56-mm M16 rifle during the Vietnam War allowed it to be adopted by the American army, which was also the impetus for the development of such weapons, designed for a low-pulse cartridge, in other countries, including Belgium.

In Russia, the idea of ​​creating a light machine gun with a combined supply of ammunition returned at the end of 2015, when the Interior Ministry announced an open competition for the development of such small arms under the code "Turner-2". According to the announced tender in 2017, prototypes of new machine guns for state tests should be prepared, as well as technical documentation for serial production of a light machine gun. It is planned to spend 25,56 million rubles for these purposes. According to the terms of reference, the Kord-5,45 manual assault machine gun (index PR-5,45), having a combined power supply, must have short and long barrels, use the 5,45x39 cartridge, mm, weigh no more than 7 kilograms, have a length of no more than 900 mm and the firing rate level 800-900 shots per minute. Power machine gun - stores capacity 60 cartridges or box with a tape, designed for 100 / 250 cartridges. The new light assault machine gun is designed primarily to support assault groups during operations in the city or in enclosed spaces.

The main difference between perspective small arms and existing models is that the light assault machine gun is perfect for firing in urban environments, both on the streets and in small-sized and volume premises, allowing the shooter to create a greater density of fire. At the same time, the probability of “unpredictable results” of firing is minimized, that is, random defeats caused by the breaking of walls or ricochets from them. This can be achieved through the use of cartridges of lesser power than the single Russian 7,62-mm machine gun PKP "Pecheneg". Another important difference between the Korda-5,45 and the light machine guns that are in service, making it as much as possible adapted for conducting dynamic combat in confined spaces, are smaller dimensions and weight, as well as greater maneuverability of the weapon. 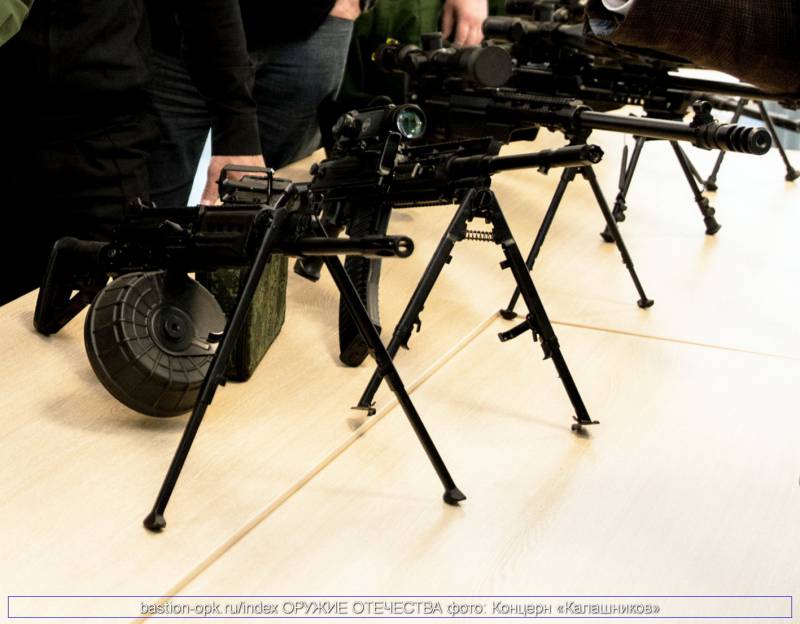 Despite the fact that the name “Kord” obviously indicates a potential contractor - the Kovrov plant named after Degtyarev (ZID), the Kalashnikov concern, on its own initiative, carried out design work on a similar development, albeit with traditional store food. The first information about the new Izhevsk light machine gun, originally designated as RPK-16, appeared in the media in November last year. And after in May 2016 was introduced new machine AK-400, sources from the Russian military industrial complex during the Eurosatory 2016 exhibition told that on the basis of this machine gun a light RPK-400 light machine gun would also be developed, which should take part in the competition announced in the country under the Turner-2 program. Thus, the Kalashnikov concern today is developing a whole unified system of small arms, continuing the old traditions since the appearance of AKM / PKK.

It is not yet known whether the fire is fired from the new RPK-400 light machine gun from an open bolt or from a closed one, Magnum magazine writes. Judging by the published photographs of the novelty, the machine gun uses gas automatic equipment. The machine gun is designed for the use of low-pulse cartridges 5,45 × 39 mm. Locking the barrel, most likely, by turning the bolt, as in the RPK-74 light machine gun and the single PKM machine gun. At the same time, there is no information on whether RPK-400 has the ability to quickly change the trunk. The gas outlet piston unit is located under the barrel of the weapon, as is the PKM. The new machine gun is distinguished by the presence of a handle for carrying. Under the barrel of a light machine gun mounted removable folding telescopic bipod. The butt of the machine gun was made folding, telescopic. The muzzle brake compensator is identical to that of the new Izhevsk AK-400 “four-hundred series” automatic machine. The polymer handguard of the RPK-400 light machine gun has Picatinny trims designed for attaching a variety of additional accessories, which include a front handle, a laser pointer or a tactical flashlight.

For all obvious reasons, the design process has not yet disclosed detailed technical details regarding the RPK-400 light machine gun, but something has already become known to journalists. In particular, the specialized online edition all4shooters.com writes that the machine gun will be equipped with a free-suspended barrel (the mount of the bipods and the base of the front sight were transferred to the gas chamber), which in combination with the machine gun’s single-fire mode and the ability to install various optical sights on Picatinny rail allows you to use the light RPK-400 light machine gun at short distances and as a sniper rifle. Like the AK-400, the butt was made telescopic, it folds freely and adjusts in length. 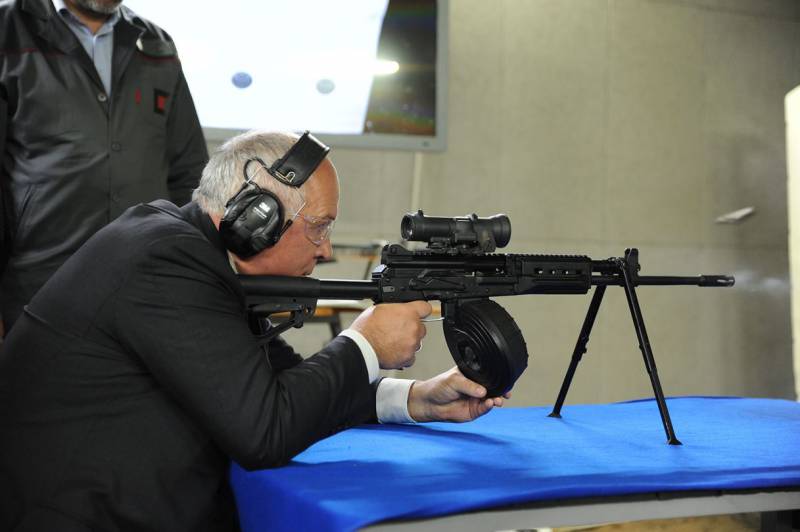 To supply the new machine gun was used drum magazine, designed for 95 cartridges, previously such a store has already been used with the AK-12 machine gun. Due to the abandonment of the tape power system, the RPK-400 machine gun should be significantly lighter than the technical task (the new manual machine gun is reported to only slightly exceed the basic AK-400 machine gun), which makes firing from the hands much more convenient. The scope of the Izhevsk design is as follows: a “heavy” assault rifle with bipods and a massive barrel, an analogue of a sniper rifle (under certain conditions), addition or replacement to a single machine gun for a rifle cartridge when conducting combat operations in a city or in limited space conditions, as well as in the implementation of foot patrols.

Ctrl Enter
Noticed oshЫbku Highlight text and press. Ctrl + Enter
We are
Concern "Kalashnikov" modernizes production and expands the range of productsConcern "Kalashnikov" will be presented in Izhevsk
Military Reviewin Yandex News
Military Reviewin Google News
83 comments
Information
Dear reader, to leave comments on the publication, you must sign in.