The Last Battle of the First Rome 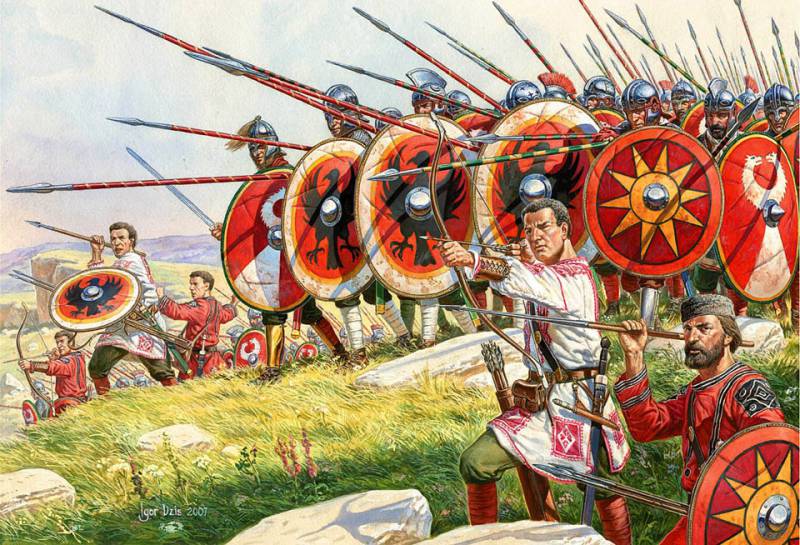 1565 years ago, 20-21 June 451, the last major battle with the participation of the troops of the Western Roman Empire. The empire itself still had 25 to live for years, it ceased to exist in 476. But even in 451, it was already clear that "eternal Rome" stands at the bottom line. By the time he lost more than half of his possessions - Africa, Britain, a significant part of Iberia and Aquitaine. And in Italy itself, waves of conquerors have already rolled, which had nothing to stop.

Nevertheless, when a horde of Huns, coming from the Asian steppes, led by Attila in 451, invaded Gaul, one of the last Roman provinces outside the Apennine peninsula, the then commander-in-chief and de facto ruler of Rome Flavius ​​Aetius decided to resist. He understood that his own strength was not enough for this, so he turned for help to neighbors and former opponents - the Franks, Alans, Burgundians and Visigoths (they are Visigoths), with whom the Romans had repeatedly fought.

He managed to convince them that the Huns would make everything worse, and that it is impossible to defeat their huge army separately. Most of the Western European tribal unions allocated detachments to the army of Aetius, and the leader of the Visigoths Theodoric decided to personally take part in the battle. The Visigothic contingent was the largest among the allies, according to some sources, he even surpassed the Roman army. On the side of Attila, too, not only steppe nomads fought. His horde included many representatives of the previously conquered Germanic tribes and peoples - Ostrogoths, Gepids, Rugs, turing, Skyriors, Heruls, and also - a part of the Alans who lived in the territory of the Hun "Empire."

20 June the armies came together in a battle on the Catalan fields. Historians have not managed to precisely localize this place until now. Supposedly, it is located somewhere in the east of present-day France, near the city of Chalon-sur-Saone, however, no trace of the grand battle there has yet been found. The number of opposing armies is also impossible to establish. Although, the Iberian chronicler Idatsy wrote that there were as many 300 thousands of Huns, most modern historians believe that this number is overestimated every five, or even ten. Apparently, there were about as many warriors of the anti-Hun coalition as their opponents. In any case, none of the ancient chroniclers indicates that one of the armies was significantly superior to the other.

The battle began with the Huns' cavalry attack on enemy military formations. Ostrogoths supported them on the left flank, and other allies on the right. Aetius located in the center of the Alans, Franks and Burgundians, he himself with the Romans stood on the left, and Theodoric was located on the right with the Visigoths.

Soon the Huns managed to push through the enemy center, but the Visigoths withstood the onslaught, although their leader was killed, and on the opposite edge of the field Roman legionnaires turned their opponents to flight. When the Visigoths, having repulsed the attack, also counterattacked, Attila realized the danger of his position. His center advanced far ahead, but both flank were broken. The Romans were about to connect with the Visigoths behind the Hun assault force, cut it off from the base camp and attack from the rear. The result was a classic "Cannes".

In order to prevent such a development of events, the Hun leader ordered to immediately stop the pursuit of Alans, Franks and Burgundians, turn to 180 degrees and return to the camp. The Romans and the Visigoths did not have time to close the encirclement ring. Attila with most of his fighters broke into the camp, surrounded by a fence of carts. By this time it began to darken and the battle stopped. The next morning, the Vistigogts tried to seize the camp, but the Huns repulsed the attack.

Attila announced that he would stand to the last and ordered to kill anyone who tried to escape. The allies, who suffered great losses in yesterday’s battle, did not dare to once again go on the assault on the “wagenburg”, having decided to starve it. However, soon the son and heir of the deceased Theodoric Thorismond received a message that distemper was brewing in his domain and there were already those who wanted to put someone else on the liberated throne.

Learning of this, Torismond decided that power was more important than final victory. Without even warning Aetius, he immediately withdrew his troops to deal with the conspirators. This dramatically changed the balance of power. The Romans could not continue the siege alone, and the Huns had a chance to make a sortie and defeat the remaining enemies. Realizing the threat that had arisen, Aetius also ordered the withdrawal. This gave Attila a reason to say that he had not lost the battle, although his attack on Gaul was stopped. On the Katalaun fields, the Huns suffered such damage that they had to return to recuperate and recruit recruits to the Hungarian steppes.

The following year, the Hun leader began a new aggressive campaign in Western Europe, but this is another история. And on the screen saver - the infantry of the late Roman Empire in battle, drawing by Igor Zis. It is not clear how Steven Seagal was there? 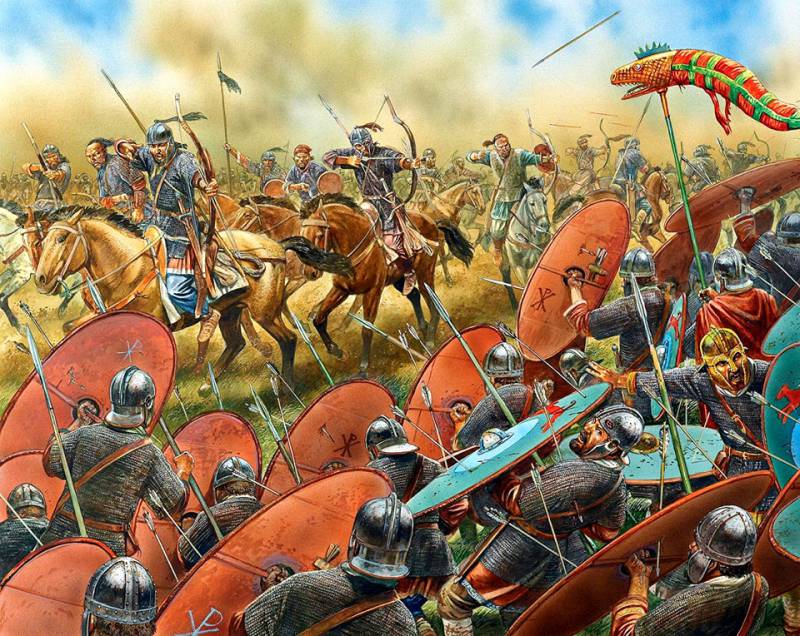 The Romans reflect the cavalry attack of the Huns. 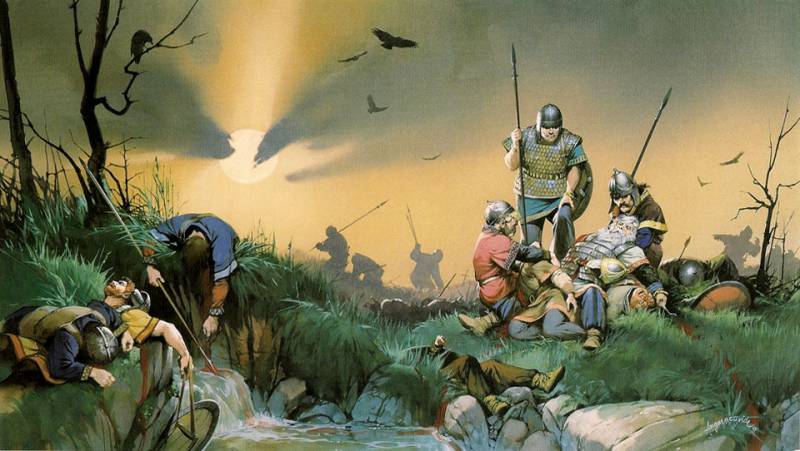 Visigoths 21 June 451 find the body of their leader Theodoric on the field of yesterday's battle.

Visigoths are trying to attack the camp of the Huns surrounded by carts. 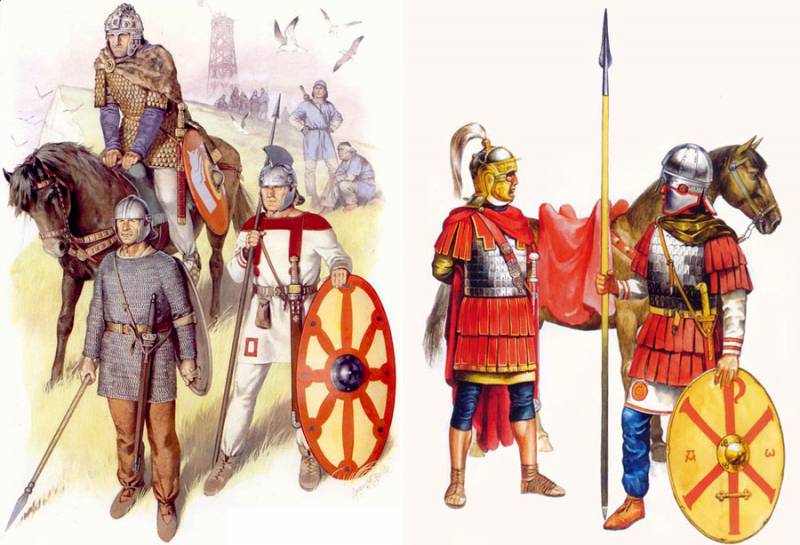 Roman infantrymen and cavalrymen of the V century. The second on the right is the centurion. 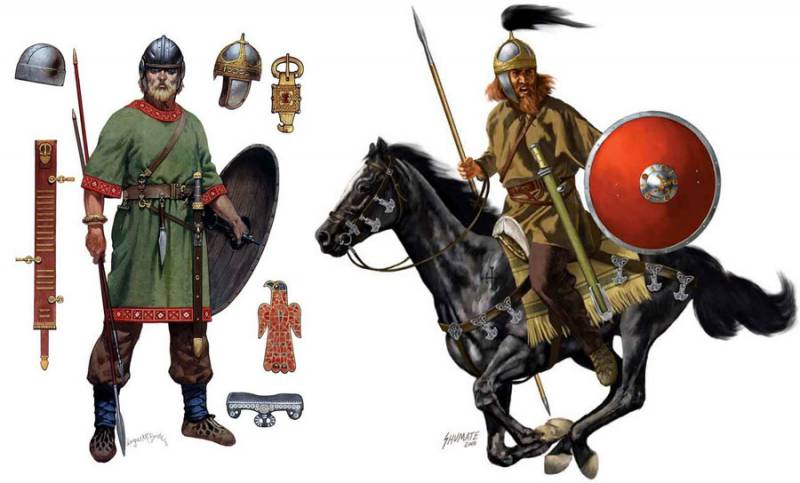 The Visigoths are the temporary allies of the Romans in the Battle of Katalaun. 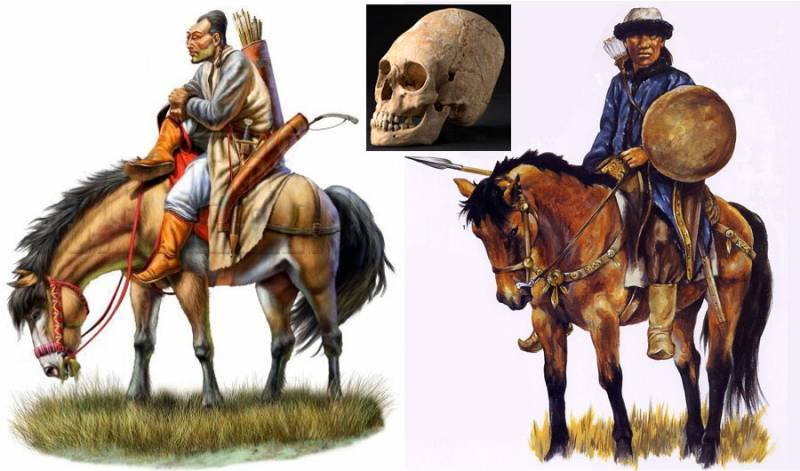 Riders of the army of Attila. The Hun aristocracy had a peculiar custom of deformation of the skulls, for which the children from infancy tightly bandaged their heads, forcing her to grow upwards. This was done in order that a noble person in any clothes and even without it could be immediately distinguished from the commoner. Such skulls were repeatedly found in rich Hunnic graves. 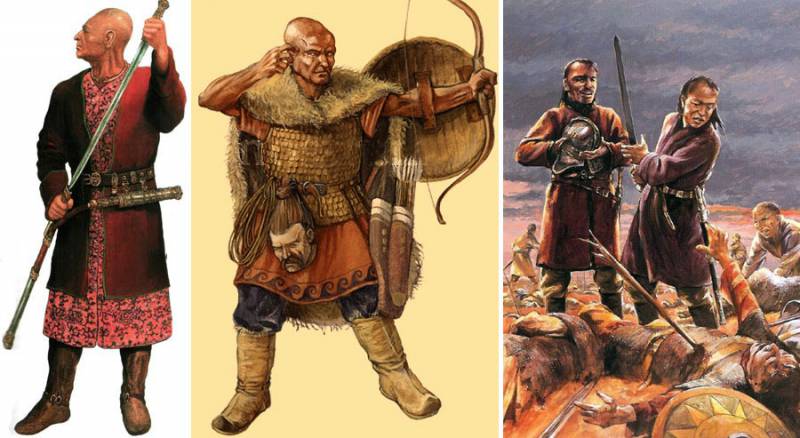 Hun infantry. In the right figure, the Huns collect trophies on the battlefield on a short night from 20 to 21 in June 451 of the year. 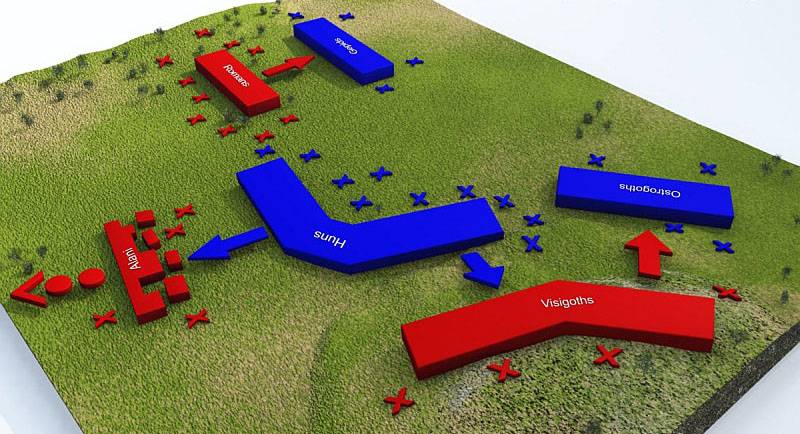