29 2016 June
36
Russian special forces will receive a new weapon, able to significantly increase their firepower and simplify the solution of some problems. A few days ago it was announced that a new hand-held rocket launcher “Bur” had been adopted by the anti-terror units. This system has a number of characteristic features, with the help of which high combat characteristics and a significant reduction in weight and overall parameters are achieved.

The development of the project "Bur" was carried out in the Tula Instrument Design Bureau. The objective of this project was the deep modernization of the existing RPM Shmel Bomb Infantry Flamethrower with the maximum possible design change aimed at achieving the smallest possible size and weight of the product. In particular, the weight of the grenade launcher should not exceed 5 kg. For comparison, the “Bumblebee” system, depending on the modification, weighs 9-11 kg. Despite its small size, the Boer grenade launcher should have been able to hit manpower, unprotected and lightly armored vehicles, as well as various shelters and structures.

In 2013, KBP for the first time demonstrated its new development during the Interpolitex exhibition. This development interested potential customers, and also attracted the attention of defense industry enterprises. According to reports, soon after the first show, it was decided to develop new sighting devices for a grenade launcher, which was to be carried out by the Belarusian industry. In 2014, the Bur system was first shown at an overseas exhibition. 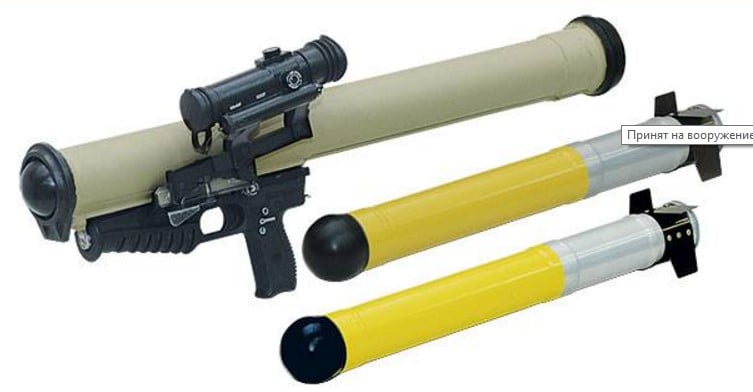 General view of the complex "Bur"

The project "The Bur" is based on several basic ideas that have already been applied in a number of previous projects of similar systems. At the same time, due to the correct application of ideas and solutions, a significant reduction in size and weight was achieved while maintaining the required combat characteristics. As a result, the total length of the product in a combat position is only 742 mm, and the mass does not exceed 4,8 kg.

The “Bur” project used the layout traditional for modern grenade launchers with the division of the complex into a transport and launch container with ammunition and a starting device. TPK is disposable, while the launcher after the shot is separated and can be used for firing new ammunition. In addition, the starting device is equipped with additional sighting equipment. Several types of such devices, differing in purpose and characteristics, are proposed.

The starting device of the “Bur” complex is an L-shaped product with a pistol grip for firing and aiming. The device has a firing mechanism for launching a grenade, as well as a fuse and some other systems, including fasteners for mounting on the TLC and a bar for mounting the desired type of sight. The operation of the trigger is controlled by the trigger and flags on the side surface of the body. With their help, the grenade thrower can fire as well as block mechanisms in order to avoid an out-of-order shot.

For aiming a grenade launcher are encouraged to use three types of sights. Together with Belarusian colleagues, KBP developed an optical sight for shooting during the day, an optical night sight, as well as a thermal imaging system. With their help, a fighter can search for targets and fire at any time of the day and in any weather conditions. Depending on the type of sight used, the “Bur” grenade launcher is capable of shooting at targets at ranges up to 950 m.

The complex "Bur" has two most unified grenades for various purposes. Both versions of the ammunition at the factory are placed inside a fiberglass transport and launch container with an internal diameter of 62 mm. The container is a pipe with sealed lids at both ends. At the bottom of the TPK there are fasteners for installation of the starting device. The container is the longest element of the whole complex. Weight TPK with a grenade - 3,5 kg. TPC is designed to protect the grenade from external influences during storage and transportation, and also serves as a guide for launching. The container is made in the form of a disposable product. After a shot, it should be separated from the trigger and thrown away.

Inside TPC is placed a reactive grenade with a cylindrical body and a hemispherical head. In the tail part of the grenade, the plumage of four stabilizers, opened after leaving the TPC, is envisaged. The design of stabilizers is as simple as possible. They are plates of steel alloy and are revealed due to the elasticity of the material. Due to the angle of installation, the stabilizer feathers create a twisting moment that stabilizes the grenade in flight.

At the head of the grenade is placed a charge of one of two types. Depending on the current situation, the grenade launcher can use a grenade with a high-explosive warhead of low mass or a thermobaric-type warhead. The latter has power at the level of 6 kg of TNT. Thus, it becomes possible to choose the ammunition with the most suitable power in the existing situation.

In the tail of the grenade there is a solid-fuel engine with the appropriate parameters. The relatively small mass of the grenade allowed the engine to be reduced to acceptable values, which accordingly affected the usability of the weapon. Thus, the possibility of shooting from the “Bura” in closed premises with a volume of at least 30 cubic meters. At the same time, unacceptable increase in pressure and injury to the grenade thrower are excluded.

The engine performance of the grenade provides a direct shot range at 650 m. The maximum firing range is 950 m. The initial speed of the ammunition depends on its type.

For use with the grenade launcher complex "Bour" a special bag-backpack is offered for transporting the necessary items. The bag has fastenings and compartments for carrying the starter, sight and three transport and launch containers with grenades. Due to the small size and weight of the products carrying a bag with all the necessary systems can be done by one person. 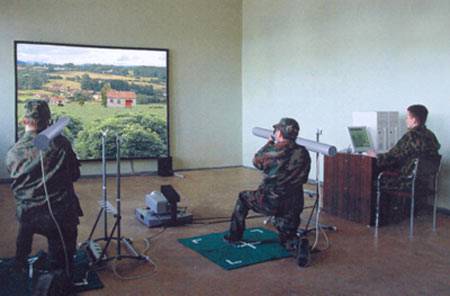 By correct selection of materials and optimization of the design, it was possible to bring the resource of the individual components of the complex to a high level. Thus, the trigger can be used for a long time, since it has the ability to execute shots up to 500.

Thermobaric warhead of one of the shots for the grenade launcher "Bur" has a power equivalent to 6 kg of TNT. Thus, in terms of power and combat effectiveness, the grenade launcher approaches some artillery shells of a much larger caliber. At the same time, however, the rocket grenade in its penetration and fragmentation action is significantly inferior to artillery shells, but this is not required from handguns.

Small size and weight allow one soldier to carry the entire grenade launcher complex with ammunition. In addition, there is the possibility of landing and free movement over rough terrain. The deployment of the complex from the transport to the combat position requires a minimum time, after which the fighter gets the opportunity to attack the existing target at a distance of up to several hundred meters. Depending on the type of target, the grenade launcher can choose the most appropriate variant of ammunition.

For the preparation of grenade throwers, KBP specialists have developed an electronic simulator of the type GK-62T. It consists of a set of special electronic equipment, several imitators of grenade launchers, a screen and other systems. The simulator is deployed in any suitable room, after which the fighters have the opportunity to begin training in the use of weapons with the defeat of various targets in different conditions.

According to reports, the grenade launcher "Bur" entered mass production in 2014 year. At the same time, there were reports of the imminent adoption of this system in Russia's arms. About two years later, in June 2016, appeared news, according to which the grenade launcher complex was adopted by the special forces of the armed forces and national guard forces. The timing of the supply of new weapons has not yet been clarified. Probably, the first production models of such weapons have already been tested in combat units, and in the very near future a full-scale supply of new systems will begin.