The energy field of Iraqi Kurdistan: an analysis of political and economic barriers. Part of 1 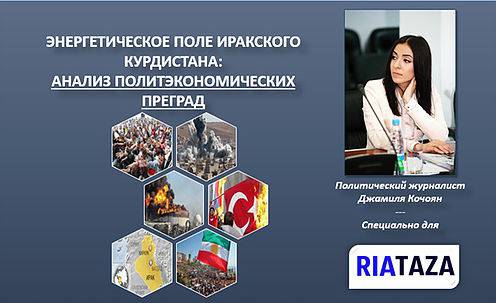 It is known that in the processes of the modern world scale, and especially the Middle East, politics always goes hand in hand with the economy: problems in one area necessarily affect changes in the situation in another. When analyzing the regional economy (especially if it is related to the oil industry), it is necessary to take into account political aspects.

Significant factor for the Kurdistan economy in the context of modern realities: providing 2,5 million refugees and military actions against Islamists ISIL [1]. Unlike the Turkish authorities (who estimated 2 million refugees at 6 billion euros), Iraqi Kurdistan did not use geopolitical blackmail for Europe and did not ask for these people. In addition, not a single force attacked the Turkish state, unlike Kurdistan: it suffices to recall the tragic history Sangal in Iraq 3 August 2014 of the year, which in reality can be called a real religious genocide. Being one of the most inhuman and cruel terrorist organizations that the world has never seen, ISIS executed more than a thousand Yezidis for refusing to accept Islam and kidnapped more than 7000 women and children. Around 500, the Yezidis were buried alive in a mass grave. And this is all in the 21st century.

The constant destabilizing factor inherent in the entire Middle East is terrorist acts. The Kirkuk-Ceyhan oil pipeline - the 970 kilometer-wide oil pipeline, the largest oil pipeline in Iraq connecting the Kirkuk field and the Ceyhan (Turkey), was particularly affected by the terrorist attacks. It is the only export pipeline in northern Iraq built in 1970 that provides Kurdistan with access to foreign markets. Oil sales bypassing the center reached 600 thousand barrels of oil per day (from November 1 to January 17 2016, 43% of Kurdish exports were destined to European consumers, primarily to Italy, another 17% of oil was exported to Cyprus). The 2015 year brought Iraqi Kurdistan revenues from oil sales of an average of $ 400 million / month. In fact, the profit from black gold is the only thing that saves Kurdistan at a difficult time and the explosions of this pipeline destabilize the entire economic field of autonomy. On the whole, there are 15 in the history of successful attempts to undermine the Kirkuk-Ceyhan oil pipeline.

Of course, the undermining of the pipeline activity has a negative impact on the economic situation. Numerous days of stagnation cut the treasury by thousands of dollars. The government of Turkey has accused the Kurdistan Workers Party of most attacks on the pipeline. Numerous sabotage forces the Government to think about building additional branches.

Political controversy over resource-rich Kirkuk black gold is another obstacle. Kirkuk land is truly golden: Kirkuk province contains 2,2% of all the world's oil reserves in the amount of more than 10 billion barrels and by the year 2003 gave 40% of Iraqi oil production. Recently, this oil-soaked earth, it seems, is waiting only for a spark, so that a large fire [2] flashes on it. Despite numerous attempts by the late Saddam Hussein to expel the Kurds and arabize Kirkuk, this city was and remains a true Kurdish land. A heroic figure in the history of Kurdistan, Mustafa Barzani called Kirkuk "the heart of Kurdistan" and its capital. To the approval of one of the members of the delegation of the March 70 Agreement of the XX century, that “Kirkuk is not Kurdistan”, he expansively exclaimed: “If at least one Kurd remains in Kirkuk, it will still be Kurdistan.

The presence of a terrorist threat in the face of ISIL not only aggravates the country's economic crisis, but also hampers energy development in particular. Kurdish officials from the end of 2014 year, planned to bring oil exports to 1 million barrels per day, but the plans did not come true, because the work was repeatedly suspended due to terrorist activities.

The main problem of the oil industry in Iraqi Kurdistan remains insufficient transport infrastructure. All the same military actions are to blame. In the north of Iraq, there is the only Kirkuk-Ceyhan export pipeline, built in 1970, which provides Kurdistan with access to foreign markets. To delivery points in Kirkuk and in the Fish Khabur region on the border with Turkey, oil is often delivered by road. The only domestic pipeline in the autonomy provides for the transportation of oil from the Khurmala Domé field.

With all this, there are a number of advantages that determine the importance and necessity of cooperation with Iraqi Kurdistan. Political benefits will be discussed in the following article.


[1] The movement “Islamic State” by the decision of the Supreme Court of Russia of December 29 of 2014 was recognized as a terrorist organization, its activities in Russia are prohibited.