July 3 2016
60
Means of struggle with cruise missiles can be placed on combat platforms, fixed above the ground in aerostats.

The most likely threat to Russia from NATO, and in fact the United States, according to most military analysts, is a quick global strike (BSU) on strategic nuclear forces (SNF) and objects of the defense and industrial infrastructure of Russia with high precision weapons (WTO) with non-nuclear combat units.

Eliminating the first factor, we return to the times of the “strategy of mutual destruction”. It would seem that everything is simple: it suffices to detect the massive use of cruise missiles at a distance from which the flying time to the target is greater than that required for preparing and delivering a thermonuclear counter strike. In this situation, the BSU loses its meaning, since most of the strategic missiles will already be launched against the aggressor and he must immediately respond with the same. The consequences of such an exchange of blows are thoroughly studied and declared unacceptable to both parties. Creating a continuous radar field around the perimeter of Russia, especially along our northern borders, will provide a guaranteed determination of the moment of attack.

But timely fixing BSU is half the battle. Some of the missiles will certainly be aimed at stationary military and civilian objects, so the second most important task is the destruction of the Kyrgyz Republic in flight.

Create a continuous zone of destruction along the perimeter of Russia with classic air defense systems (aviation and SAM) in the near future is hardly realistic. There were ideas to use the upgraded MiG-31 for this, but there are a number of fundamental objections: the lack of sufficient quantities and the necessary infrastructure (airfields, fuel depots, ammunition, etc.), as well as the time spent on the reaction of the aircraft, which is especially important when the score goes for minutes. The chain of constant readiness air defense positions is not feasible for similar reasons, to which the specific conditions of the Arctic are added. It should also be taken into account that the BSU involves a massive attack (more than a thousand today, and then even more), it is unlikely to be able to repel it with the help of anti-aircraft missiles and aircraft. A different solution is proposed.

The combat module, equipped with a powerful radar that provides early detection of in-flight missiles, with electronic warfare equipment, which creates an effective field of interference to missile control and guidance devices, is suspended by a balloon at a height optimal for effective use of the weapon placed on it. One of the most promising means of combat is the so-called electronic bombs, which can exist in the form of warheads, rockets, shells or stationary ammunition, creating a powerful one-time electromagnetic pulse, which affects the electronic filling of the CD. The greatest effect will be caused by the failure of the on-board computer controlling the inertial and electron-optical correlation systems. Such platforms (if mass and size parameters do not allow, then several modules carrying individual elements of the complex) can also reliably hit not only control and guidance bodies of the CU, which fall into their area of ​​operation, but also CG themselves. Especially effectively can be their use on the span, since the top subsonic "Tomahawks" represent a contrast target against the background of the earth. The number of modules should provide a continuous zone of destruction by means of EW. 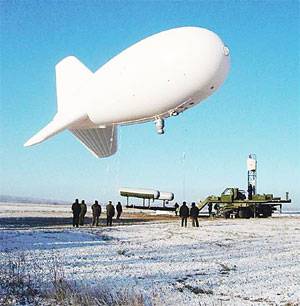 What are the advantages of placing these means of fighting the Kyrgyz Republic on combat platforms raised and fixed above the ground in aerostats? The first is constant readiness. The second is the cost. Placing on the ground the equipment for launching an aerostat with a combat module and several structures supporting it (for personnel, warehousing, energy supply) are much cheaper than organizing fixed positions. Third, the optimal height of the location will increase the detection radius. The fourth is mobility. Move the complex is not difficult. The fifth is much less stringent requirements for the choice of installation site, which is especially important in the conditions of the North. Taking into account the significantly lower costs for the deployment of air combat platforms and the possibilities for their improvement, we conclude that they can become one of the promising areas for the development of air defense systems.

The idea of ​​connecting the balloon with early warning radar is not new. One of the latest developments in this direction is the JLUNS (Unified Cruise Missile Aids Detection System) complex from Raytheon. The maximum detection range of air targets is up to 550 kilometers. Perhaps the addition to the specified complex of aerostat with radar, providing illumination and targeting of anti-aircraft missiles. Adding EW facilities to such a system will create a solid field of detection and a high probability of destroying air targets. Of course, there are objective difficulties - climatic conditions (temperature, winds), lack of roads and much more, which, of course, will make it difficult to implement the development. There is another danger - the appearance of hypersonic cruise missiles, the use of which will dramatically shorten the reaction time required for a forward retaliatory strike. But the countermeasure weapon also develops and sometimes outpaces the means of attack. The main thing is to choose the right direction of their development, start developing and delivering to the troops in time.