Do not shoot polar bears

July 3 2016
34
In recent years, the Arctic region is gradually turning into an arena of not only economic, but also armed confrontation. As the Earth's climate undergoes changes and high latitudes become more livable, many countries, among them Russia, are striving to create an economic and military infrastructure there.


In just a few years, the Russian leadership has recreated the old and deployed new military bases, moreover, it opened an umbrella of anti-aircraft and missile defense over the Arctic. As part of the domestic Armed Forces, a unique unit appeared - the 80-I separate motorized rifle brigade, designed to perform tasks in the conditions of the Far North.

In the struggle for the Arctic, the United States, Canada, Norway and the United Kingdom are not lagging behind Russia; they are also actively deploying new units and subunits in their northern territories, building airfields, naval bases and other infrastructure, constantly conducting exercises.

It should be noted that countries with access to the Arctic have extensive experience in fighting in the polar regions. As early as the Cold War years, the USSR held a fairly strong strike force on the border with Norway, and the American and British marines held exercises with the Norwegians twice a year, practicing a reflection of the massive offensive of the Soviet army.

In the past few years, military confrontation from the subarctic regions gradually goes higher, approaching the North Pole. It is attractive for the deployment of various reconnaissance complexes, surveillance and warning systems, and other military infrastructure, which, in the event of the outbreak of hostilities, will have to be destroyed, and this, admittedly, is not a trivial task.

Despite the fact that under international law, the North Pole and the adjacent region of the Arctic Ocean do not belong to any country, and the five Arctic states surrounding this region - Russia, Canada, Norway, Denmark (through Greenland) and the United States have rights only to 370 -kilometer exclusive economic zone off their shores, Washington and Ottawa are conducting experiments to search for military facilities using unmanned aerial vehicles in the polar regions. To the top of the Earth began to pick up the forces of special operations. This, in particular, the fighters of the American DEVGRU, their colleagues from Canada are the military personnel of the Joint Task Force 2 and even the special forces of the British 2 CAC regiment constantly participating in joint exercises with their American colleagues.

Russia is not far behind. According to some reports, the reconnaissance-landing company, which is part of the 80 ombsbbr reconnaissance service, will be trained in combat operations on the drifting ice in the polar region, and the commanders of the command of special operations forces are beginning to develop this region.

Western special forces have so far been eyeing the North Pole, conducting various marches without practicing any combat missions. Judging by the open publications, we are talking about the first stage of spetsnaz adaptation to the pole, during which it is necessary to acquire general skills, find the right equipment and uniform. 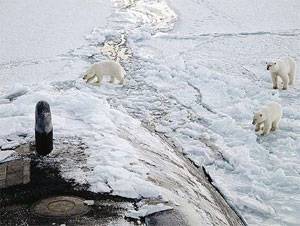 As American and Canadian experts note, combat experience in the polar regions is hardly applicable at the pole. Attempts to implement the previously obtained developments in the Arctic were unsuccessful. Therefore, everything has to be created from scratch.

The same path was followed by the leadership of the Russian military. Work on the combat documents governing the actions of intelligence, special forces and fighters KSSO, has just begun. In the meantime, the Airborne Forces and the CSTO RRF completed several marches and parachute jumps in high latitudes.

In the spring of this year, the group of instructors of the special operations training center located in Gudermes was the first to conduct military exercises near the Barneo polar station. For four weeks, the fighters autonomously worked on various combat missions, including parachuting, conducting reconnaissance and search operations, detecting and eliminating troops of the likely enemy, his base camps.

It is safe to say that today the Russian security forces are seriously ahead of their Western colleagues in the development of the North Pole and already have a unique experience of conducting exercises and working out combat missions in this region. So what are the features of Arctic special operations? Employees of the special operations training center agreed to share their unique experience with the Military Industrial Courier.

It is believed that this region is a solid ice-snow desert with a relatively flat surface. Far from it. Everywhere a pile of hummocks, significantly impeding the movement of soldiers, especially if they are with a heavy load. In this case, the ice moves, because of which multi-kilometer cracks are often formed, which are difficult to overcome or circumvent.

Low air temperature, constantly changing weather, snow storms, polar nights are not all natural phenomena that significantly complicate the task force’s task force. At the pole, almost all of the surrounding terrain is white, which negatively affects visualization. If under normal conditions the human eye becomes attached to various objects, for example, buildings, trees, roads, other objects, then it will not work at the pole without adaptation and special preparation.

Only skis are better than feet

At present, the supply of scientific expeditions and polar stations from the mainland is carried out by planes taking off and landing on specially prepared lanes. And in the subpolar region, the main vehicles remain helicopters, snowmobiles, and special tracked vehicles, known as ratracks.

For the special forces, the most optimal way to drop into the area of ​​the pole is a parachute jump. It should be noted that the expeditionary center of the Russian Geographical Society, which has been operating in the polar region for more than ten years, annually develops a drifting ice camp - the Barneo station mentioned.

Landing at high latitudes places special demands on the equipment of the fighters, since if the clothes are not properly fitted, it is very likely to get the most severe frostbite while still in the air.

Due to problems with the visualization of the terrain when jumping, it is necessary to constantly check with the altimeter. But when less than a hundred meters is left to the ground and the device stops working, it remains to rely only on its instincts and personal experience.

Helicopters are effective at the North Pole. However, their use is also associated with certain difficulties, since during operation the machine screw raises snow and small fragments of ice into the air, which seriously impede orientation.

During the expedition to the pole, instructors of the training center worked out the tactical use of snowmobiles, which showed their best side. Having fixed the sled behind the machine, you can easily transport not only the whole group, but also its property, and if the soldiers are seated correctly, they will be ready to join the battle at any time.

And yet the North Pole is a remote area, to which the delivery of equipment is in itself a serious problem. Therefore, for the time being, foot marches and skis remain the main mode of movement.

Snow, hummocks and a constant white background reliably hide the enemy, so at the pole one cannot do without special sights, night vision devices, infrared illuminators and other special means of observation. But any electronics requires power sources, and in ultra-low temperatures neither batteries nor accumulators do not last long - and this is one of the biggest problems. After all, in addition to observation devices and sights, special forces troops still carry radio stations, signaling means, navigation and other electronic equipment.

As the instructors of the center admit, quite a lot of work had to be done on the “electric” problem during the exercises, but the way out of the current situation was found and everything worked stably until the end of the trip.

On the one hand, the white background helps to disguise perfectly, but on the other hand, the slightest mistake will reveal your position, because the likely adversary also uses modern means of reconnaissance and surveillance against you. Therefore, for the successful implementation of the tasks, it is necessary not only to use maskhalats, but also to mask weapon, close your gear. According to the recommendations of the center’s instructors, masking machine guns, machine guns and sniper rifles, it’s not only necessary to paint them white, because there’s little use for this, you will still see straight lines of the weapon, but apply a pattern similar to the camouflage of the maskkhalat worn on you. Standard guns paint does not withstand ultra-low temperatures, but the center’s instructors managed to select a special composition for high latitudes.

High in the mountains and in the winter forest, the problem of providing drinking water is solved quite simply - snow or ice is melted on a fire or special burners. But at the pole most of the ice is salty. Therefore, if there is no snow at hand, only knowledge of the types of ice will help: a specialist in color and texture will easily determine whether the ice is salty or fresh.

But the problem of drinking water at the pole is not as acute as on the mainland. Properly chosen clothing, combined with low temperatures, even with heavy physical exertion, does not cause excessive sweating, and the body loses fluid not as actively as, for example, in the mountains.

For the same reason, for the fulfillment of the assigned tasks, the special forces officers should not put on softshel jackets and trousers that take moisture well, but membrane suits, which are much safer to protect from the wind.

As one of the instructors of the center noted, at the North Pole the best way to quench thirst, oddly enough, cola-type carbonated drinks. Of course, taking a soda on a combat mission is not worth it, but under camp conditions it can be used freely.

When working at the pole, different sublimated products are not recommended. In general, a special diet is needed here, selected on the basis of the physiological characteristics of each person. It is important to combine high-calorie and high-energy food. According to the instructors, chocolate and meat chips performed well.

In conditions of the pole it is not recommended to use tents, since even a good fabric does not allow to keep heat for long periods at low temperatures, combined with a strong wind. It will not save the tent from the attack of polar bears, for whom breaking the protective material is not difficult. Therefore, it is necessary to build special shelters of snow, similar to the Eskimo igloo. Let them be constructed a little longer than putting up a tent, but they provide a comfortable temperature inside and with proper construction they withstand an adult beast.

When deploying a camp, it is necessary to set security not only to protect against the enemy, but also to prevent polar bears from attacking. For the same reason, personal weapons should always be with you, because bears are less predictable and, therefore, more dangerous than enemy special forces. But the main task when meeting with the Red Book animal is to drive away, not kill.