A scenario is a brief and consistent description of the forms and methods of actions of forces and means of informational influences in time, space and on a particular area in accordance with the prevailing situation. Why is this terminology used? The concept of “scenario” is not as frightening to people as “operation”, “battle”, “punch”, etc. In addition, “film adaptation” can be watched in real time, like a movie, and see that everything that happens is quite humane, in the norms of the existing law. This is facilitated by the use of modern global information technology, which was not previously. Finally, decision-making on the development of warfare scenarios is increasingly being made, as a rule, by politicians, and more recently by civilians. For them, the notion of “scenario” is closer and more acceptable.

Fast forward to fifteen centuries ago. In the IV – V centuries of our era, the onslaught of the Huns to the east of Europe was such a force that set in motion many other peoples who, fleeing from the invasion, rushed to the west of Europe, devastating in their turn the territories of both Roman empires. The Huns rolled like a snowball, incorporating into their composition all who were ready to share with them military booty, stolen from foreign lands. Speaking in an incomprehensible language, alien to ancient culture, the Romans called barbarians. Later on, people who invaded the borders of the empire and founded independent states on its territory became known as such.

New barbarians under the leadership of the United States master the territory and space to a tee as when conquering Ancient Rome. The “locust invasion” scenario developed overseas implies that in the victim country there is no need to create a revolutionary situation and use armed forces, to occupy the territory of the state. You can take possession of the state through the targeted relocation of alien ethnic groups to it while simultaneously conducting large-scale terrorist acts (if necessary).

The strategic goal of the information war conducted on the basis of the “locust invasion” is to demoralize the population in the right direction, convincing the country's leadership to resign and appointing the “necessary” president and government.

This scenario can be embodied both as a whole and as separate “plots”: “partisans (forceful)”, “refugees”, “terrorists”, “enclaves (communes) and hidden terrorists”, “sects”. As a rule, implementation occurs in the form of various combinations.

Scenario "guerrillas (power)" It assumes the creation, at the expense of financial and material means, of a powerful state of formations of trained and well-armed mercenaries (terrorists) of 40 – 50 thousand or more near the territory of the victim country with a subsequent attack on it.

An example is the “Islamic State” banned in Russia. The 2006 of armed groups and terrorist organizations that arose in Iraq in October, later on became an independent force in the civil war in Syria and in a short period of time captured up to 70 percent of its territory. The number of armed units of the IG was about 100 thousands 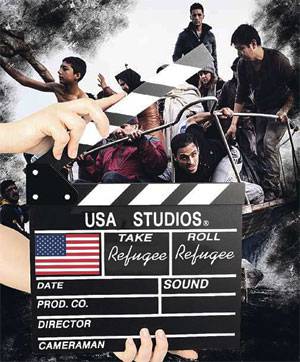 Scenario "refugees" involves the creation of a massive controlled influx of migrants from around the world to the victim state. It creates controlled chaos with constant internal conflicts, a large number of civilian casualties. As a result, he is subjected to the strongest pressure for people to leave their homes and move en masse to another victim state.

Such countries for a long time drop out of world and regional politics, their economic condition is rapidly deteriorating. Leadership is forced to deal only with internal affairs. And the state scriptwriter at this time creeps and purposefully captures the economy of the victim.

Well-funded organizational structures, numerous intermediaries and guides are created to manage migrant flows. All of them operate under the constant guidance of US intelligence.

Managed crowds of visitors paralyze the normal life of the country. Migrants live in railway stations, streets and squares, block roads, conflict with local people and police, and massively distribute drugs. Schools, kindergartens, Christian churches are converted into shelters, jobs are given to immigrants, taxpayers' money is spent on the construction of new hostels and mosques. With the flow of refugees in the state penetrate fraudsters, criminals, the sick. The latter are carriers of various infections (measles, tuberculosis, AIDS), which can cause massive epidemics that people of many states have already forgotten. Sick every third. Doctors in many European countries are sounding the alarm, fearing for the health of the indigenous people. Mass resettlement is accompanied by trafficking in persons and their internal organs.

Currently, this scenario continues to be fully implemented in a united Europe. In the 2014 year, about a million people from the Middle East penetrated here. In 2015, even more. In a very difficult position, between the hammer and the anvil, Greece turned out to be a transit country. Since the beginning of 2016, more than 150 thousands of people have arrived on its territory. None of them wants to remain in Greece, but they are not allowed to continue. As of April, there were more than 53 thousands of migrants in the country. Of these, 46,5 thousands are dispersed in mainland Greece. 7100 are also located on islands, mostly close to Turkey.

An attempt to implement such a scenario was undertaken by the United States and against Russia after the “color revolution” in Ukraine and subsequently during the “anti-terrorist operation” against the population living in the Donbass. The total number of those who fled from the Donetsk and Luhansk regions exceeded 2,3 million, of which more than a million moved to Russia. But the “trick” failed because the refugees are identical in spirit, way of thinking, religion to the majority of the population of our country.

Finnish President Sauli Niiniste 14 said this February that Russia may still face the same influx of refugees that Turkey is experiencing. If it “closes the border or the flow coming from it is taken under control, then a wave of people will move somewhere else. In this sense, Russia can become the second Turkey. ”

Scenario "terrorists" It implies a massive "uncontrolled" migration with militants in its composition. According to Chinese intelligence, as of March of this year, along with refugees to the UK, there were up to 500 terrorists, to Germany - to 900, to France - about 400 people. In total, about four thousand trained militants could have penetrated into Europe.

Detroit - the city of bread

Scenario "enclaves (communes)" involves the creation in large cities of the victim state of territories inhabited only by gentiles. In France, the enclaves (communes) have become a reality. In the vicinity of large cities, 800 Muslim settlements appeared, where there is no access to representatives of the authorities and the police, where they live under Sharia law. These zones are ideal springboards for implementing a masked invasion strategy.

In Britain, imams seek that the government formally designates certain areas of the city of Bradford (West Yorkshire) as zones subject to Sharia law. In Denmark, Muslim leaders demand a similar status for some parts of Copenhagen. In Belgium, the Muslim population of Sint-Yans-Molenbek (district of Brussels) already considers it not as the territory of the kingdom, but as part of the Islamic world - the ummah (religious community), where wrong access is denied. Muslim schools are opened in enclaves (communes), madrasas, mosques are built.

The example of Detroit 50, when black families were settled among the white population to live together and cultivate a tolerant attitude, showed the result opposite to the expected one. The negroes (then it was still possible to call them so in the USA) attacked passers-by, killed, robbed. The authorities allowed them any crimes. And the white retaliatory actions in their defense were regarded as racism and were severely punished by the courts.

Crime has flourished among the blacks. Detroit gained notoriety as one of the most dangerous cities in the United States. In 1967, African-Americans staged a large-scale massacre of whites. From our two-millionth city at the beginning of the 50-s to our time, it has decreased to 700 thousands, and the population consists mainly of native migrants who live on benefits and deal with crime.

Scenario "hidden terrorists" involves the return after some time in the state of militants from the armed forces.

Consider the attacks in Paris on November 13 of the 2015 of the year (more than 130 of the dead and 350 of the wounded) and in Brussels on the 22 of the March of the 2016 (the 34 and over 230, respectively). All the accomplices of the terrorist attacks in the capital of France and their direct executors are Muslims, most fought on the side of the Islamic State. In Belgium, the same story.

These attacks show that they fully implemented a combination of scenarios "terrorists", "hidden terrorists", "enclaves (communes)".

Scenario scenario involves the creation of numerous religious groups and communities in the victim state, including prohibited movements. This is one of the most important directions in the implementation of the “locust invasion” scenario, according to the United States.

Thus, over the past 15 years, the number of sects in France has tripled - from 200 to 600. And most of them were created with the active participation of the United States and totally controlled by them. In Ukraine, there are hundreds of satanic sects, the founders of which are including the United States. This is an important lever of pressure on the power of the victim state.

Recall that the United States has reserves to continue the implementation of the “locust invasion” scenario. In Europe, this is Ukraine, on the territory of the Russian Federation - refugees from Armenia, Azerbaijan, Tajikistan, Uzbekistan, Kyrgyzstan, who will rush into our country if the "color revolutions" begin.

“Locust invasion” may undergo any state, regardless of the level of development. From the above it is clear what to do to exclude such a scenario with us.