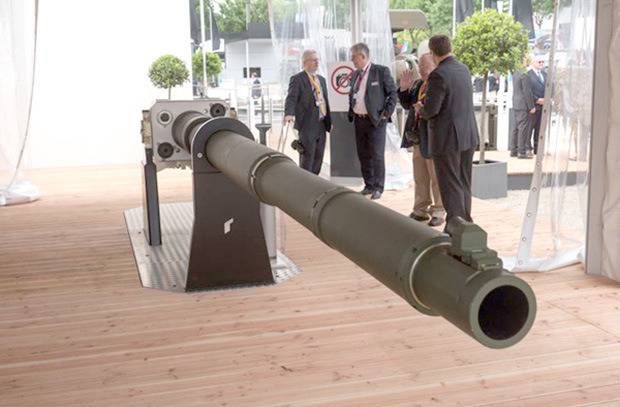 German developers claim that tank the L / 51 cannon will be able to stop the Russian T-14 Armata tank. Is it so?

The eternal problem of “projectile against armor” reiterated itself at the end of last week. At the exhibition of weapons "Eurosatory-2016" (13-17 June), the German concern Rheinmetall Defense showed a prototype of the new NATO tank gun. The manufacturer claims that the power of the gun has been increased by 10% compared to that of the German Leopard-2 tank and will be able to withstand the latest Russian T-14 tank Armata.

The demonstration of such a cannon and the excitement raised around it is more evidence of the concern of the Western military about our new tank. However, the reasons are not only this. But first about what is known about the gun, the tank and the possible result - who wins.

Little is known about the new gun, and that is from the article in the exhibition issue of Jane's Defense Weekly. An L / 51 cannon with a 130-mm caliber and a total (barrel) weight of at least 3 (1,4) is designed to fight with our T-14 tank and can be installed on the Leopard-2А5, Leopard-2А6 tank and for the promising Franco -German tank MGCS. To increase armor penetration at 10%, new, longer and heavier projectiles have been developed for the cannon - sub-caliber armor-piercing with a feathered core and a separating pallet, as well as high-explosive fragmentation with remote blasting. Practical test shooting guns have not yet been. It is reported that the designers decided to leave the download in L / 51 manual. That's all for now.

And what about the "Armata"?

As Oleg Bochkarev, deputy chairman of the board of the Military Industrial Commission (MIC), noted, the Armata surpasses the main battle tanks of other countries in a number of indicators.

The first is the high security of the crew. It is provided by the placement of people in an armored capsule, as well as systems of active, dynamic and passive protection. At the teachings of T-14 was never amazed. Complicates the defeat of the tank and its truncated silhouette, which in the heat of battle must still get. Well, if hit, then the projectile, in addition to the protection systems, has to overcome highly effective combined multi-layer armor (44С-св-Ш, SRI "Steel"). By the way, the “cake” of metal, ceramics and composite materials on 15% reduces the total weight of the tank's armor protection while maintaining the required armor penetration.

The smooth-bore 125-mm gun 2А82 “Armata” also has high destructive capabilities. It can shoot both conventional and guided projectiles of the Krasnopol type. To make it clear what was going on, “Krasnopol” at demonstration firing in Abu Dhabi hit a moving tank at a distance of 12 000 m. In addition, a projectile was created that pierces steel homogeneous armor 4700-850 mm at a distance of 1000 m. According to Deputy Prime Minister Dmitry Rogozin, "we have a projectile burning a steel meter, we will bet on Armata." Projectiles for “Almaty” are made from 2013 year and enter the army.

Another feature is the ability to quickly replace the factory 120-mm on the 152-mm 2-83 gun with automatic loader, which was already tested at the end of 90-x and the beginning of 2000-s. According to well-known experts in the field of armored vehicles, Viktor Murakhovsky, Sergey Suvorov, Victor Baranets and others, according to general indicators, this gun has no equal today, and its opponents are unlikely to appear in the near future. Against its armor penetration 1024 mm at a distance of at least 5100 m will not stand any of the currently existing foreign tanks. The lack of such a gun in service today is explained by the fact that the standard gun "Armata" today solves all the necessary tasks. But “when the time comes, and there will be a real need for such an instrument to be installed, 2А83 will be returned,” says Suvorov.

And one more property of "Armata" is its mobility. According to this most important indicator for combat conditions, the Russian tank surpasses Western competitors or is not inferior to them. Diesel engine power 1400-1600 hp with an automatic transmission, it provides tank movement at speeds up to 80 (70) km / h on a highway (rough terrain). 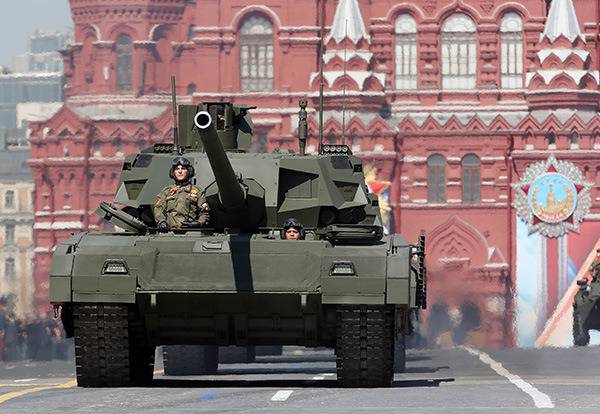 The reason for the loud announcement

The reason for the emergence of a new German cannon and loud statements about its so far not really confirmed data is trivial - the competition and the desire to grab a piece from the gun "pie", but more. In the current conditions of total anti-Russian hysteria and intimidation of western people with a threat from the “East”, Western industrialists have a good time to score points with such statements.

Judging the effectiveness of the new German cannon in the fight against "Armata" on the booklet is an absurdity. According to political analyst and military expert Vladimir Karyakin, the characteristics weaponsspecified in the brochures should never be taken for granted.

On the other hand, does the same Germany, France and other NATO countries need such a gun? In the context of reducing the work on the creation of new tanks and the modernization of existing ones, the answer is rather negative than positive. So it turns out that all this demonstration hype is designed for those who already have Leopards, Leclercs and Abrams. Sly German manufacturers are counting on the sly to push their gun through to those who are very afraid of the Russian threat.

The reason is also that the 120-mm smoothbore guns of the Rheinmetall company use the majority, except for the Russian and Chinese, manufacturers of tanks. So it turns out that the Germans will do with their gun if they don't buy it?

The fact that the Germans were clearly in a hurry to declare the possibility of their gun fighting Armata is nothing more than a marketing ploy. This is obvious, especially for professionals. Without specific data of practical shooting of the gun installed on the tank, it is hardly worth taking these and similar statements seriously. So far there is no convincing evidence of the ability of the new cannon to resist the Armata, but there are clear flaws. For example, the same lack of an automatic loader, which will undoubtedly reduce the rate of fire of the gun. There is no data on the compatibility of the new gun with the existing firing control systems, in particular, the gun stabilizer. And without it, there will be no high accuracy of shooting.

But even if they pass the tests, there will be no special faith in them. It is no secret that Western manufacturers often test their products in benign conditions to obtain the “desired” result. A very recent example is the Italian Iveco armored car called the Lynx. On comparative trials with our "Tiger" in Nizhny Tagil machine hopelessly stuck. Of course, the drivers of the “Lynx” refused help from the “Tiger”. The “Lynx” anti-mine capabilities did not fully respond as voiced in the booklets. The result is known: our military rejected the Italian in favor of their Russian car.

However, such facts do not seem to bother German and other European marketers. Even the fact that "Armata", like T-90, is equipped with effective means of protection. Do not take into account the capabilities of the enemy, in this case to protect, a great self-confidence on the part of the German specialists, who have always been distinguished by their pragmatism and thoroughness.

In general, it turns out that the German engineers gave not so much a serious answer to the Russian technology as they decided to “warm their hands” on the artificial fear of the Russian T-90 and T-14. It is quite possible that at the next such event Russia could show “Armata” with a 152 caliber millimeter cannon. And then what? Do they have the courage to come together in comparative competitions and prove their case? It is doubtful.

Ctrl Enter
Noticed oshЫbku Highlight text and press. Ctrl + Enter
We are
What you didn't want to know about EnglandThe best main battle tanks of the world 2012 of the year
Military Reviewin Yandex News
Military Reviewin Google News
214 comments
Information
Dear reader, to leave comments on the publication, you must sign in.