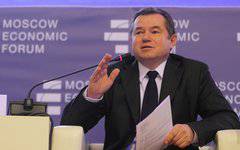 Today, Russia again, as has already happened, has become the object of Western aggression, the cause of which is the struggle for global domination by fomenting world war for control of the periphery.

The authorship of such a destructive policy belongs to the United States, who regard Europe and Russia as peripheral regions of their financial and economic empire and try to subordinate them by imposing a hybrid war.
This policy, if you look into the patterns of modern socio-economic development, has a logical explanation. Modern changes in the world economic and political system, as in previous historical periods, are caused by the processes of changing technological and world economic structures.

Each world economic structure has its own growth limits determined by the accumulation of internal contradictions within the framework of the reproduction of its constituent institutions. The development of these contradictions occurs until the moment of destabilization of the system of international economic and political relations, which has been resolved so far by world wars.

During such periods, the system of international relations is sharply destabilized, the old world order is being destroyed and a new world order is being formed. The possibilities of socio-economic development on the basis of the existing system of institutions and technologies are being exhausted. The countries leading before this face insurmountable difficulties in maintaining the previous rates of economic growth.

The re-accumulation of capital in obsolete production-technological complexes plunges their economies into depression, and the existing system of institutions makes it difficult to form new technological chains. They, along with new production organization institutes, are making their way in other countries wishing to become leaders in economic development.

The former leaders seek to retain their dominance in the world market by increasing control over their geo-economic periphery, including methods of military-political coercion. Thus, modern information and communication technological order was largely generated by the Star Wars doctrine, a strategic defense initiative that allowed the United States to justify the need for large-scale investments in improving the breakthrough technologies of the new technological order.

That is, a breakthrough to this new technological trajectory was carried out through a powerful initiating impulse organized by the “arms race”. Similarly, the year before last transition from one technological structure to another occurred after the catastrophe of the Second World War.

The current transitional period, due to the change of both technological and world economic structures, is characterized by the habitual aspiration of the world hegemon - the United States - to provoke entire regions of instability (a series of “color revolutions”, civil wars and conflicts under the guise of exporting democratic values) to instigate entire regions. that ensures the economic interests of the “metropolis” resource periphery.

The second motive behind the US geopolitical attack on Eurasia is a desperate attempt to prevent the emergence of a new integrated world economic structure, the center of which is being formed in Asia. Creating an integral system combining the advantages of market self-organization and strategic planning, China, India and other Asian states harmonize the interests of social groups on the basis of the policy of priority development.

Russia can take advantage of replacing the US-centered model of the world with a new, focused on harmonious cooperation in Asia, and become an important link in this new center of the world economy if it starts to pursue a similar policy of anticipating growth of the new technological order and master the institutions of the integrated world economy. This will ensure sustainable economic growth at a rate of at least 6 – 8% of GDP growth per year, the successful development of Eurasian integration and, most importantly, end the global hybrid war.

On this path, Russia can restore its leadership in the global intellectual, scientific, technical and economic space. Otherwise, our country will be divided between the old and the new centers of the global economy (USA and China), and its parts will remain on the raw material periphery of the global market. The choice between these scenarios opposite in their sociopolitical results lies entirely in the plane of state economic policy. If it remains unchanged, Russia will slide into a catastrophic scenario.

If an advanced development policy is implemented on the basis of a new technological order, through a combination of strategic planning and market competition, Russia will perform its economic miracle, form a viable economic union in the post-Soviet space and, along with rapidly developing Asian tigers, will become the core of attraction of the new integral world economic structure. The latter is in harmony with the historical and political traditions of the Soviet economic system, which allows organically to use the institutions and mechanisms adapted by China and other states of Southeast Asia in modern management practice.

In China and other new industrialized countries of Southeast Asia, the growth of a new technological order takes place simultaneously with the formation of a new system of institutes of expanded reproduction of the economy corresponding to its specificity. This system of institutions differs significantly from the American model, which only recently seemed to be an advanced model for imitation.

Thus, the Chinese Communist leadership continues to build socialism, avoiding ideological clichés. They prefer to formulate tasks in terms of the national welfare, setting goals for overcoming poverty and creating a society of average prosperity, and subsequently - reaching an advanced standard of living. At the same time, they are trying to avoid excessive social inequality, while preserving the labor base for the distribution of national income and orienting the institutions of economic regulation to productive activity and long-term investments in the development of productive forces. This is a common feature of the core countries of an integral world economic structure.

Regardless of the dominant form of ownership — state, as in China or Vietnam, or private, as in Japan or Korea — an integral way is characterized by a combination of institutions of state planning and market self-organization, state control over the basic parameters of economic reproduction and free enterprise, the general ideology good and private initiative.

At the same time, the forms of political organization may differ fundamentally - from the largest Indian democracy in the world to the largest Chinese Communist Party in the world. The priority of public interests over private interests remains unchanged, which is expressed in rigid mechanisms of personal responsibility of citizens for conscientious behavior, precise fulfillment of their duties, observance of laws, and serving national goals.

The primacy of public interests over private interests is expressed in the institutional structure of economic regulation that is characteristic of an integral world economic structure. First of all, in the state control over the basic parameters of capital reproduction through the mechanisms of planning, lending, subsidizing, pricing and regulating the basic conditions of entrepreneurial activity.

At the same time, the state orders not so much as it performs the function of a moderator, forming mechanisms of social partnership and interaction between the main social groups. Officials do not try to lead entrepreneurs, but organize joint work of the business, scientific, engineering communities to form common development goals and work out methods for achieving them. The mechanisms of state regulation of the economy are tuned to this.

The state ensures the provision of long-term and cheap credit, and businessmen guarantee its targeted use in specific investment projects for the development of production. The state provides access to the infrastructure and services of natural monopolies at low prices, and enterprises are responsible for the production of competitive products.

In order to improve its quality, the state organizes and finances the necessary research and development, education and training, and entrepreneurs implement innovations and invest in new technologies. The public-private partnership is subordinated to the public interests of economic development, increasing people's well-being, improving the quality of life. The ideology of international cooperation is changing accordingly - the paradigm of liberal globalization in the interests of the private capital of the leading countries of the world is replaced by a paradigm of sustainable development in the interests of all mankind.

Based on such ideas about the modern model of the world order, the Eurasian integration process is taking place in the post-Soviet space today. The Eurasian idea and Eurasian policy is not only geopolitics in its traditional sense (as dominance in the region), but also the struggle for the national value system, which actually became an integral part of the struggle for sovereignty and protection of national interests in Eurasia.

It is not by chance that at the Valdai Forum in 2013, V. Putin said: “This is not just an analysis of the Russian historical, state, and cultural experience. First of all, I mean general discussions, talk about the future, about strategy and values, the value basis of our country's development, about how global processes will affect our national identity, about how we want to see the world of the 21st century, and what can to bring our country - Russia together with partners to this world ”.

With the transition to a new world economy, the limits of liberal globalization are being revealed. Emerging in the face of American dominance, new independent centers of the world economy - China, ASEAN countries (Association of Southeast Asian Nations), India, and the Eurasian Economic Union (EurAsEC) - have their own cultural and civilizational characteristics, distinguished by a value system, history, culture, spirituality and national and regional specifics.

Today it is obvious that for all the significance of globalization, none of these centers of power will not give up its own characteristics and cultural and ideological identity. Within the framework of the emerging integral world economic structure, they will develop them, seeking to increase their competitive advantages in comparison with other centers of power.

Russia faces an obvious choice: either to become a powerful ideological and civilization center (which was typical of the entire thousand-year history of its development), as well as economic and social, or, having lost its identity, remain on the periphery of the new world economic structure. The choice in favor of self-sufficiency and independence, based on an understanding of its cultural and historical mission, requires the restoration of the relatively high weight of Russia and the EurAsEC in the world economy, trade, scientific and technical cooperation.

We need to develop, adopt and implement a set of measures, taking into account the still limited Russian resources and the capabilities of our country in Eurasia. For this, a strategy of advancing development of the Russian economy must be implemented.

As was shown above, broad Eurasian integration, including Europe, and China, and India, as well as the Middle and Middle East, could be a powerful stabilizing anti-war factor, helping to overcome the global economic crisis and create new opportunities for development. The thinking and most responsible part of the world community realized that in order to avoid a new wave of self-destructive confrontation and in order to ensure sustainable development, a transition to a new ideological model based on the principles of mutual respect for sovereignty, fair global regulation and mutually beneficial cooperation is necessary.

Russia has a unique historical opportunity to regain the role of a global unifying center around which the formation of a fundamentally different balance of forces, a new architecture of global monetary and financial, trade and economic relations on the basis of justice, harmony and cooperation in the interests of the peoples of all Eurasia will begin.