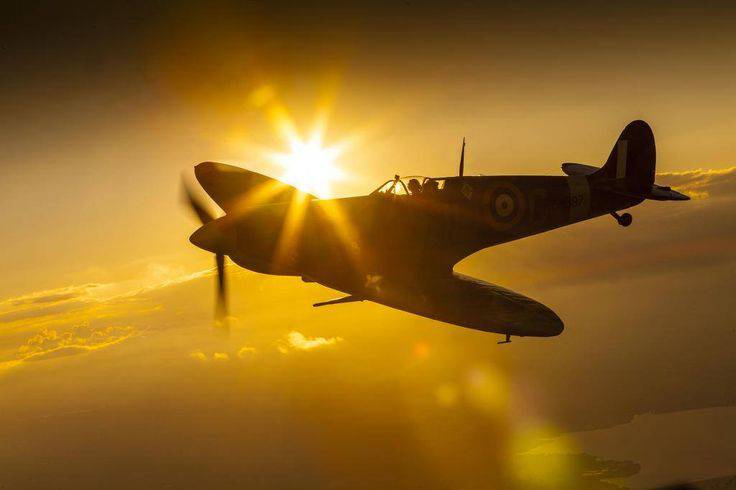 ... Britain rules the seas, but air is more important than water. In the battles with the Luftwaffe, a superhero was born, grinding in the sky a good third of Germany aviation in the second world war. His name is “Supermarine Spitfire” (“Ardent”).

It is curious that the creator of the legendary machine, aircraft designer Reginald Mitchell, did not have a specialized education. The lack of a diploma was compensated by the tremendous experience in engineering positions. From a draftsman at a locomotive building plant to a technical director of the company Supermarin.

Over the years, Mitchell designed the 24 type of various aircraft, including the record-breaking “Supermarine S6B” (1931). Looking at modern airliners, it is impossible to imagine how this raskalochny monoplane with ridiculous floats could accelerate to 650 km / h. Even a decade later, in the early years of WWII, not a single serial fighter could boast of such a result.

An experienced designer knew that the main resistance in flight is created by the wing. In pursuit of speed, you need to reduce its area. Reduce it so that modern cruise missiles instead of wings stick only short "appendages". But the plane is not a rocket. Too small a wing will lead to an unacceptable increase in landing speeds. The car will break on the lane. But what if instead of solid ground - water that can soften the blow? And Mitchell put his S6B on the floats. The merry flying boat broke all records, and its creator received the prefix “sir” to its name.

The games continued until an order for a promising fighter for the Royal Air Force appeared. The competition was not easy, seven well-known companies submitted applications for participation (Bristol, Hawker, Westland, Blackburn, Gloucester, Vikkers and Supermarine). Initially, the model “Supermarine” hopelessly “poured” competitors, and Mitchell's bold plans did not find application in practice. Until the correct configuration of the elements appeared: an ellipsoid wing of amazing beauty and grace, a thin profile elliptical tail and the Rolls-Royce Marilyn motor with a reliable liquid cooling system.

But what kind of romance without women?

Special role in stories “Spitfire” was played by Lucy Houston. British aristocratic woman who donated 100 to Mitchell thousand fn. Sterling. It was solid money: in those years, four serial fighters could be built on them. In fact, she sponsored the creation of one of the most successful aircraft of the Second World War, which without it simply would not have appeared. 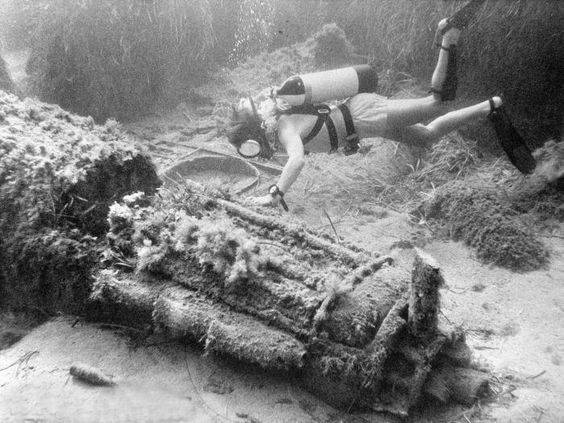 Here the force of the explosion bleeds the blood with water,
But even then, harsh and strong,
Fragment of the aircraft steering wheel
Do not let the dead hand ...
(The wreckage of the "Spitfire" off the coast of Malta)

When Mitchell was told how beautiful his plane was with such an elegant wing, he indifferently shrugged his shoulders: “What is the difference, the main thing is how many machine guns can be thrust into this wing”. And there they fit as many as eight pieces - 160 bullets per second. Although weak, rifle caliber (7,62).

In fact, it is very weak for the initial period of WWII on a “purebred” interceptor fighter designed for battles with their own kind. A bullet, no matter how “small” it is, yet a bullet. It was enough just one hit in the engine "Messerschmitt" to refuse the entire cooling system (which is true for any aircraft with in-line engine with a vulnerable "jacket" liquid cooling). And more such bullets were produced per second than modern six-barreled miniguns produce. The air was literally soaked with traces of hot lead. “Spitfire” was not created for jokes.

Almost simultaneously, the fighter’s “gun” modification was launched into the series, with two 20-mm “Ispano” cannons in the wing. Installation was easy (even easier than the standard “garlands” of machine guns), but fixing it turned out to be a problem. “Ispano” was intended for installation in the collapse of the cylinder block, where its carriage became a heavy motor. When installed in the wing had to design a new carriage and increase the rigidity of the structure.

The “Spitfires” of the 1942 model of the year already had mixed gun and machine gun weapons. The latest modifications were equipped exclusively with guns. It should be noted that following the results of the air battles of the Second World Question, “What is more effective: guns or“ garlands ”of machine guns?” Remained without an unequivocal answer. 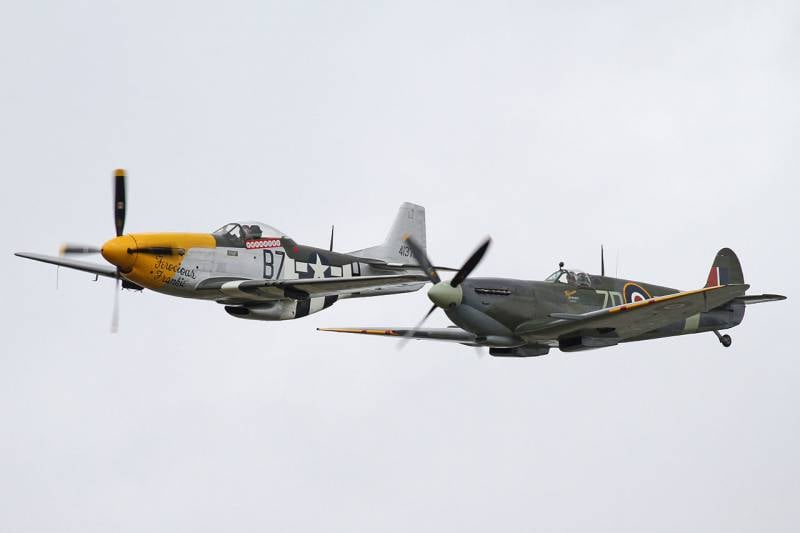 "Spitfire" and its faithful companion "Mustang"

As, however, and the choice of the engine. Despite its increased vulnerability, liquid-cooled motors ensured better streamlining and improved aircraft aerodynamics. Unlike the USSR, Germany and the USA, which used a wide range of aircraft with engines of liquid and air cooling, the British flew off the entire war exclusively on engines with liquid cooling. The Rolls-Royce Merlin became the permanent symbol of the Royal Air Force, named after the bird of prey of the Falcons detachment (or did anyone seriously believe that the engine of the combat aircraft was named after the wizard of Oz?)

Exceptionally reliable and versatile engine, which shavers put on everything. From one “Marilyn” was obtained “Spitfire”. Of the two - "Mosquito". Of the four - a strategic “Lancaster”. The prevalence of “Marilyn” is indicated by the fact that the number of modifications of the main “branch” of the motor development was through numbering from “1” to “85”. Excluding licensed copies and experimental directions.

In the “Ardent” dynasty, there were also a dozen major modifications: from the “primitive” pre-war version of Mark-I to the crazy Mark-21, 22, 24 already delivered in the last months of WWII. Extended fuselage, teardrop lamp, bomb holders. Maximum speed in horizontal flight - 730 km / h.

In 1944, during the tests, the pilot Martindale dispersed such a “Spitfire” to a peak of 0,92 sound speed (1000 km / h) at the peak, setting an absolute record for the WWW piston fighters.

After the war, in 1952, the weather reconnaissance (Spitfire of 81 Squadron based in Hong Kong) reached a record height of 15 700 meters. 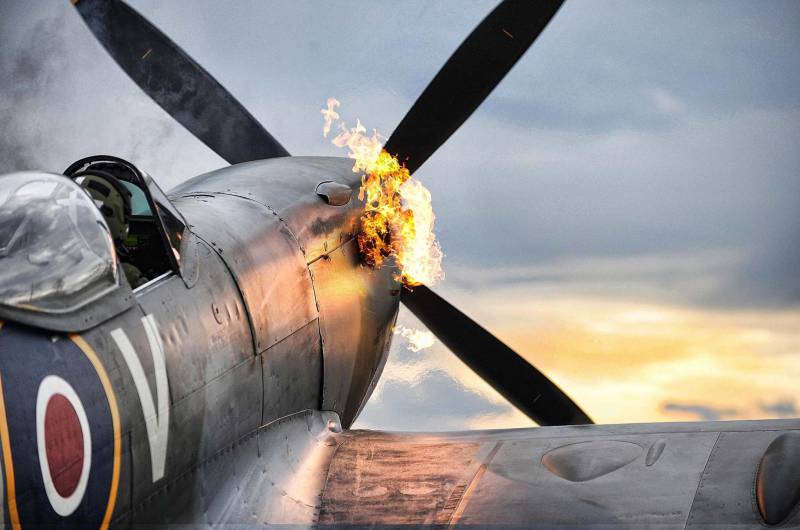 According to its characteristics and design, these were completely new aircraft, which retained only the name of the original “Spitfire”. Inside, there was no Marilyn, instead, starting with version XII, a new Rolls-Royce Griffon engine was installed. The British well squandered cylinders, bringing the working volume to 36,7 liters (10 liters more than the “Merlin”). At the same time, thanks to the efforts of the designers, the dimensions of the motor remained unchanged, only the weight increased by 300 kg.

A double-supercharger “Griffons” could have produced a 2100-2200 hp in flight, the German Uberingeners did not even dream of that. However, this was partially the merit of high-quality gasoline with an octane rating of 100 and higher.

The simpler modifications of Spitfire, the “winged workers' wars,” also shook the sky blue with the power of their engines. As an example - the most popular model Mk.IX (1942 year, 5900 built copies.).

The armament is two 20-mm cannons (120 shells per barrel) and two Browning caliber 12,7 mm (500 ammunition). On the part of the machines instead of large-caliber machine guns stood four rifle caliber.

Among the records of “Nine”:

She owns the first reliable case of the destruction of the reactive Messerschmitt (5 Oct. 1944)

On the same “Spitfire” in March 1945, the air defense pilots intercepted a German high-altitude reconnaissance aircraft flying over 11 kilometers over Leningrad.

In September, 1945, a record leap was made from the cab of “Nine”. Pilot V. Romanyuk jumped out of the 13 108 meters with a parachute and landed safely on the ground.

In total, the Soviet Union hit 1,3 thousand Spitfires. The first aircraft appeared in 1942 as part of the 118th Regiment of the Northern Aviation Aviation fleet. These scouts (mod.PR Mk.IV) made a significant contribution to the victory in the North, incommensurable with their number. Thanks to its high-altitude and speed qualities, Spitfires could fly with impunity over German bases in Norway. They “grazed” the parking of the battleship “Tirpitz” in the Kaa Fjord.

Another batch of aircraft appeared in the spring of 1943 of the year (this was the first time that the “Spitfires” were officially shipped abroad). The fighters of the Mk.V modification were immediately thrown into the Kuban “meat grinder” as part of the 57 Guards Iap, where they showed quite successful results (for the month 26 air victories).

From February 1944, large deliveries of the “Spitfires” of version IX began. Taking into account the high-altitude qualities of these fighters (the “Spitfire” had a greater ceiling per 3 kilometer than the domestic La-7), all British fighters were sent to air defense aviation.

Statistics instead of words

According to Black Cross / Red Star (Black cross / Red star, by Andrei Mikhailov and Krister Bergstrom), one of the most comprehensive reference books on air resistance during the WWII years, as of October, Luftwaffe lost 1944 in the East 21 213 aircraft front.

Over the same period, the losses of the Luftwaffe in the Western theater of operations accounted for the 42331 aircraft. If you add more 9980 German planes lost during the 1939-41 period, then the full statistics will become 21213 to 52311.

Indirectly, these calculations are confirmed by the adoption of the “Urgent Fighter Program” to protect the Reich (1944 year, Hitler's decision to curtail the production of all types of aircraft, except fighters). All sorts of stories about the allies fighting with jet Messerschmitts, He.219 “Wuhu”, strategic four-engined bombers He.177 “Graf” and FW-190 modifications of “Sturmbock”, which were not heard on the Eastern front.

You can compare the figures of the Luftwaffe with the facts of sinking thousands of ships in the Atlantic and the Mediterranean. All this required bombers and torpedo bombers, under the guise of fighters. Who made combat missions and, of course, suffered losses. The attack of the Maltese convoys, air cover during the “Cerberus” operation, a massive raid of thousands of German aircraft on Allied airfields (Operation Bodenplatte, January 1 1945) with painful losses for both sides, etc. etc.

And at the same time take into account the scale of the air battle for Britain.

Given all this, it becomes clear why the main part of the Luftwaffe died in the West theater.

Where the main and most massive adversary of the Germans in the air was the “Supermarine Spitfire”, which ditched at least one third of all fascist aviation during the war years. The logical result for the 20 thous. Fighters, continuously produced from the beginning to the very end of WWII, and every day, during the 6 years, engaged in battles with the Luftwaffe. 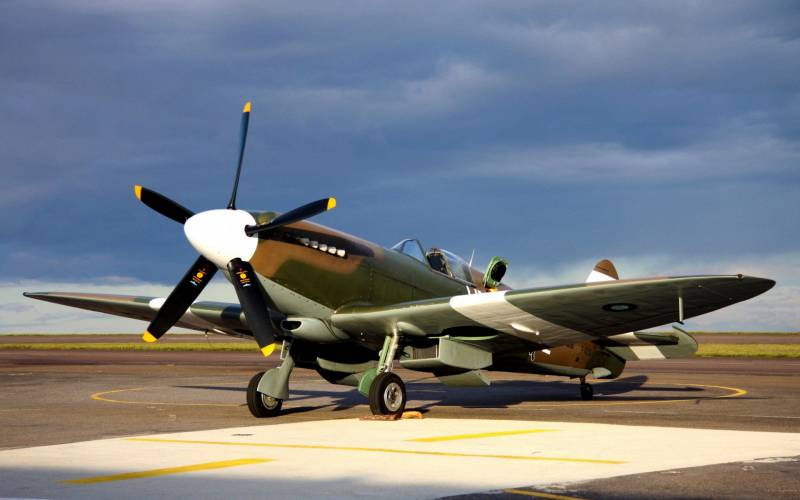