A misty vision of euro-cover?

29 2016 June
114
The politicians of Germany, France, and at the same time Italy, started talking about the “European superstate”, which should replace the EU. The project, which German Minister Frank-Walter Steinmeier intends to submit in Prague in early July, describes a common foreign policy, tax and visa system. It also speaks of the weakening of the role of NATO in this super-education.


The idea of ​​a single “superstate”, about which one very enterprising German person, Herr Steinmeier, will tell 4 of July (was this date chosen by chance - US Independence Day?) In Prague, has long been in the air. For several years now, experts have been talking about a certain “Reich” with the capital somewhere in Berlin and with the present government, and not with “supranational institutions” like those that the EU has. It seems that the idea is turning into a political initiative. And, of course, the Germans will represent the initiative.

However, one should not think that we are talking about some national values ​​and (God forbid) about racial purity. Quite the contrary: the ideologists of the “superstate” want to preach on the territory of the new union the refusal to control their own borders of the “former” states. Thus, refugee flows will be able to move absolutely freely.

It turns out that this initiative is generally consistent with the policies of Frau Merkel and is based on the very European values, which imply the free movement of individuals without visas and borders. A kind of European Union, only under the flag of the present state, and not a quasi-state entity with yellow asterisks. Well, it is clear who will be the main. Not Greece with Cyprus. And, of course, Britain, which is not slowly chipping away from the EU.

Presumably, Brexit and became a catalyst for political "fermentation" in Europe and led to a specific reaction of the leaders of Europe. It was not by chance that Berlin, Paris and Rome came out right now, after the British referendum, in which almost 52% of voters voted for the United Kingdom to leave the EU.

As transmits "RFI", Germany, France and Italy promised to submit a plan of reforms to the European Union and commented on the likely exit of Great Britain from the EU (Brexit).

"We agree on this issue: we will not conduct any formal or informal negotiations on the British withdrawal from the EU until an official request is made at the level of the European Council", - quoted Chancellor Angela Merkel, speaking at a press conference in Berlin after meeting with the President of France and the Prime Minister of Italy.

Regarding the reform plan of the European project, the leaders of the three states in a joint statement designated three priorities: “internal and external security”, including the fight against terrorism, the development of European defense and the protection of external European borders, “strong economy” and “ambitious programs for young people” .

As it turned out, the “case” is also Belgium, the Netherlands and Luxembourg. RIA News" notes that some passages of the German-French project were included in the final statement of six foreign ministers (Germany, France, Italy, Belgium, the Netherlands and Luxembourg). The ministers met on June 25 at the Borzig villa in Berlin.

The draft states that Germany and France “regretfully take note of the fact that the British people voted for the United Kingdom’s withdrawal from the EU”, and therefore Berlin and Paris call on the rest of the EU members 27 to perform a “dual task”: to concentrate on addressing common challenges and achieve results on previously raised questions.

So that “Europe jointly and confidently spoke in the international arena”, the authors of the project suggested concentrating on three areas: security, migration policy and economics.

The security alliance means pursuing a common defense policy. It is necessary to adopt the EU Global Development Strategy, which would emphasize the role of the European Union as an “independent and global player”.

“Germany and France are convinced that the time has come to substantiate a truly integrated European migration policy,” the document further notes. The question of the protection of the borders of the European Union “has long ceased to be a national task,” and therefore it is proposed to transfer it to the “first multinational agency for the protection of borders and the coast.” There is also a reality: human and technical resources will be transferred to the agency FRONTEX in the medium term. In addition, the project provides for the creation of an electronic system of entry permits for ESTA for citizens of “third countries” - with a visa-free regime. And, of course, the authors of the project emphasize the right of refugees to seek asylum (according to the Geneva Convention).

Finally, the monetary union. "France and Germany are jointly responsible for building a strong monetary union that can compete internationally," RIA quotes "News»Document.

And the question of power. According to the draft, it is proposed to create the post of head of the Eurogroup. This official will be accountable to the relevant committee of the European Parliament. The European Stabilization Mechanism (ESM) will be transformed into a European Monetary Fund operating under parliamentary control. In addition, it is planned to take steps to create a unified budget.

Polish state television channel TVP, which quotes BFM.ru, notes that the project proposed by Berlin and Paris, involves the creation of "a single European state, dependent on the strongest players of the EU today."

The states that agree to participate in the new union will lose the right to their army, special services, criminal codes, the tax system, their own currency, and central banks that are capable of "really protecting the financial interests of the national state."

The most interesting thing is that simultaneously with the EU transformation project another high-profile initiative was announced.

The draft version of the “global strategy” of the EU has been edited Financial Times.

The document notes that political uncertainty creates threats and opportunities for the EU. Germany and France see, against the background of the coming split of Britain, an impetus to deepen cooperation in the field of common defense and security within the EU. Discussion of the document promoted by Mrs. Mogherini will be discussed at the summit of EU leaders on Wednesday.

The draft document specifically mentions the need for a "consistent and unified approach" to the "strategic challenge" of Moscow, since "the EU and Russia are interdependent." We are talking about cooperation with Russia.

“Therefore, we will cooperate with Russia to discuss differences and cooperate in cases where our interests overlap,” the strategy states.

The document clearly hints "at a gradual process of reconciliation," says correspondent Alex Barker. "Reconciliation" with Moscow is associated with the likely separation of Britain from the EU.

The EU has not updated its security strategy since 2003, the publication reminds. At that time, the spirit of optimism prevailed in the union. Not so now. The authors of the document are concerned about “Russian aggression in Ukraine,” “terrorism at home,” and “the migration crisis at the borders of Europe,” the journalist lists. The project “ominously” notes: “We need a strong Europe. This is what our citizens deserve, this is what the whole world is waiting for ... "And finally:" Our union is under threat ... Our European project, which has set an unprecedented pattern of peace, prosperity and democracy, has been called into question. " 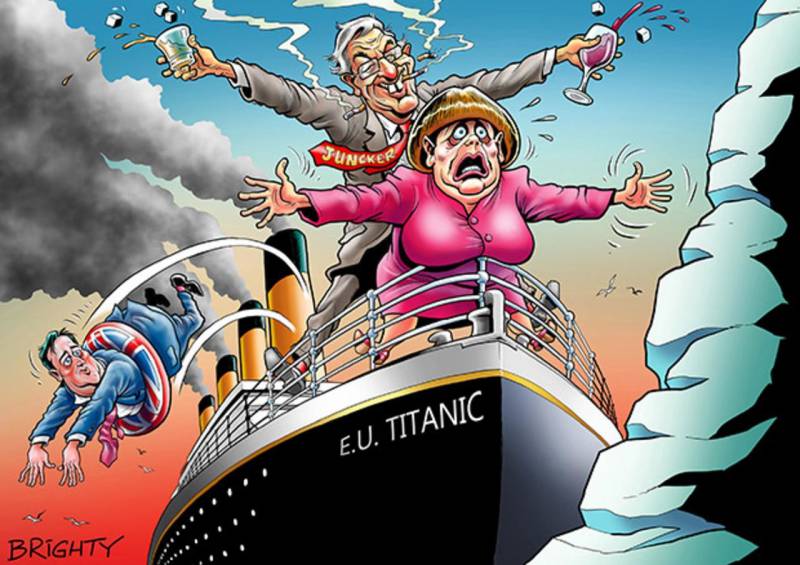 Undoubtedly, projects of such great historical The changes were inspired by the decision of the British in the recent referendum to leave the European Union: almost 52% voted for Brexit. The political career of EU supporter Prime Minister Cameron has collapsed. And we are already talking about the secession from the United Kingdom of Scotland.

The will of the British people, in fact, launched a ready mechanism for political modernization of the European Union. Obviously, after the exclusion of Britain, a new troika of leaders will be formed in the EU (we can say it has already been formed): Germany, France and Italy. Belgium, the Netherlands and Luxembourg have joined them. The case for the following.

An unexpected Brexit gave some chances to the Kremlin. No wonder Mr. McFaul in the United States stated earlier about the victory of Putin in the British referendum. The UK, which advocated sanctions against Russia, will no longer play any role in EU policy. Probably, the new alignment may cause, if not cancellation, then easing sanctions against Moscow.

Observed and commented on Oleg Chuvakin
- especially for topwar.ru
Ctrl Enter
Noticed oshЫbku Highlight text and press. Ctrl + Enter
We are
Results of the week. "This bad man will betray us at the first danger!"Results of the week. "God forbid to see Russian revolt, senseless and merciless!"
Military Reviewin Yandex News
Military Reviewin Google News
114 comments
Information
Dear reader, to leave comments on the publication, you must sign in.