On the visit of Vladimir Putin to China, or the difficult partnership for broad smiles

28 2016 June
132
The visit of Russian President Vladimir Putin to China has ended, which allows us to sum up certain results. A visit taking into account the already numerous meetings of the Russian and Chinese leaders can be called special, if only because against the background of attempts to increase economic and cultural interaction between the Russian Federation and the People's Republic of China in the crisis, the first call of the collapse of the European Union rang. The results of the referendum in the UK, finally voiced and confirmed during Vladimir Putin’s visit to Asian partners, became a kind of confirmation of the numerous ideas that a united Europe is “not a long-term resident”. 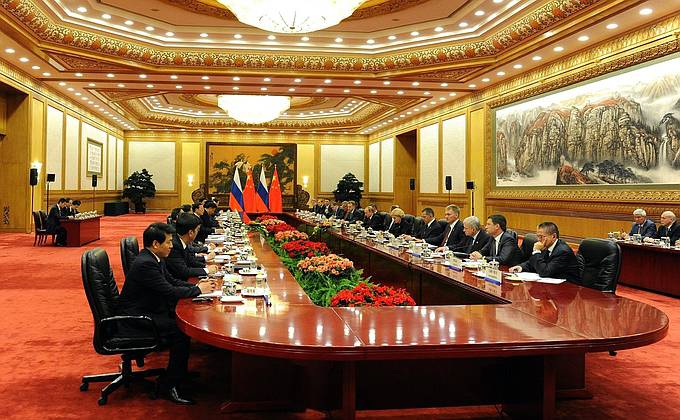 Information Agency Xinhua publishes a statement by the director of the Center for International Energy Strategy at the Institute of International Studies of China Shi Tse:
The fact of the development of our relations in recent years proves that these two strategic decisions, namely, the signing of an agreement on good-neighborliness, friendship and cooperation between the PRC and the Russian Federation and the establishment of Chinese-Russian relations of strategic interaction and partnership, are in the fundamental interests of the two countries and their peoples. and also keep up with the times. The process of developing relations in recent years also demonstrates that both countries have developed a mature model of cooperation, which has stood the test of practice.

Against the background of the same “Brekzit”, the statement about the “mature model of cooperation” is like a transparent allusion to the fact that in other regions of the world, where the external partner is trying to rule, the relationship is far from maturity. Although what kind of maturity of relations in the European Union can we talk about, if the EU has finally rolled down to the generation of hundreds of all sorts of directives and regulations that effectively deprive the countries of real sovereignty in the unification of the country? There was no real equality at all. Loans, quotas, overdue loans, new quotas, loans for the repayment of overdue loans, the next quota is a chain that actually reflects the essence of economic contacts within the European Union. As far as such a system, even if Western propaganda itself tried to set it up as ideal, turned out to be “viable,” the very results of the British referendum showed.

Against this background, attention to cooperation within the international organizations in which the Russian Federation is composed is particularly great. This, for example, is about BRICS and the SCO, of which China is also a member. Taking into account the most serious crisis facing the EU, there are no special reasons to declare the complete absence of problems for these organizations. There are certainly more than enough problems, but one cannot but admit that the relations here are different. To torpedo each other with quotas and demands, no one allows himself for the simple reason that all parties at least try to take into account each other's interests. Not always, it is true, with the same China it turns out, but no one said that the PRC is an “easy partner.”

So, what kind of economic picture appeared before the start of Vladimir Putin’s visit to Beijing? After a rather long period of decline in commodity turnover between the two countries, the bilateral trade bar began to move upwards. According to the PRC leader Xi Jinping, the volume of trade between Russia and China for the period from January to May of this year increased in comparison with the previous period by 2,7%, reaching the value of 25,8 billion dollars. By the end of the year is expected to reach the level of turnover in 65 billion dollars. Although China remains the trade leader for the Russian economy, these figures look quite low in relation to at least 2013, when it was predicted to overcome the psychological level of $ 100 billion. However, we must not forget that many mutual transactions are now carried out through the use of national currencies. And if the dollar equivalent due to the fall in the ruble exchange rate itself fell by a third, then the fall in the volume of direct trade and money supply in national currencies for transactions was not so steep.

What steps are determined for the growth of turnover? One of the industries - the development of mutual tourism. Last year, it was the Chinese who became the foreign people who won first place in the number of tourists in the Russian Federation. Mutual "tourist turnover" approached 2,5 million people. Next year it is planned to bring this number to 3 million. For this, a whole list of joint cultural programs and recreational projects has been created.

Of course, energy was not left without attention either. The close cooperation of Russia and China on the creation of the Power of Siberia gas pipeline, the launch of which is scheduled for 2020, continues. At the same time, China has achieved increased participation in the Yamal LNG project. This is the largest project in the Russian Federation for the production of liquefied gas. Chinese companies supply the necessary equipment for the project. So, in April of this year, the 2 module for the production of LNG from 36, which will be built in the PRC, was sent to Russia from the Chinese port of Qingdao to Russia. It should be recalled that China at one time claimed for more than 20% stake in the Yamal LNG project. Under the pressure of the Chinese partners, which, as already noted, far from easy to negotiate, it was decided to increase the “Chinese package” to almost 30%. 50,1% of the project shares is concentrated in NOVATEK, 20% in the French Total, 20% in the Chinese CNPC. Another 9,9% is now owned by the Chinese Foundation "Silk Road". For this, Russia turned out to "bargain" for itself participation in the project for the construction of the Tianjin oil refinery.

Understanding that the partnership between Russia and China in the energy sector could nullify all the energy sanctions imposed by the EU on the Russian Federation and finally finish off the crumbling European Union, Europe began to wag its tail. For example, Poland, without officially declaring support for the construction of Nord Stream-2, is submitting an application to purchase gas in annual volumes of 11 billion cubic meters from Germany after 2023 of the year. Given the fact that Germany with the current market situation simply does not have the opportunity to sell Russian gas in the volumes requested by Poland, the Polish application on behalf of Gaz System was the actual support (albeit veiled) for the construction of Nord Stream-2.

That is, the pragmatics of Russia in cooperation with partners (perhaps, somewhere and there are questions) today leads to the fact that it is such an economic policy that acts as a serious lever of influence of Moscow.

After the talks between the two heads of state, Moscow and Beijing signed more than 30 cooperation agreements not only in the areas mentioned, but also in the areas of innovation, technology, finance, the media, the Internet and sports. The total volume of mutual investments in the tens of billions of rubles and yuan. And each time the parties literally linked their participation in joint projects. However, the truly labor results of the negotiations led to the fact that the interests of the partners were eventually taken into account by both parties, and the glasses of champagne were not drunk.