Experts: the US will fall apart, and Russia will become a prosperous peasant country

28 2016 June
102
Todd Buchholz, the same specialist who once gave economic advice to George Bush, now predicts ... the collapse of the United States. American billionaire Jim Rogers went even further. He assures that not only the United States will collapse: the whole world will collapse after the fall of the States. The Russian Live Target channel focused on the theme of Texas: they say that this state is just one indicator of the “global crisis in the United States.” US problems can reach "critical mass."

"The desire of the Texans to gain independence, - tells its viewers "Living Target", - just one of the indicators of the global crisis in the United States. "

The channel tried to "understand what was happening in America." But at the same time to understand how what is happening will affect in the world.

1. If Texas becomes eligible for a referendum, the United States is waiting for a "domestic political crisis." Can be provoked "a whole parade of sovereignties." They are talking about the department in Louisiana, and in Wyoming, and in Nebraska, and, “of course, in Alaska,” the channel said. On the website of the White House administration there are already 29 petitions of citizens: the documents are devoted precisely to the question of the withdrawal of their home state from the United States.

The situation may lead to the introduction of troops in any rebellious state. There was already a precedent - in 1861 (the creation of a confederation was the reason for the start of the civil war).

2. Foreign policy crisis. The US foreign policy, even in relation to the allies, "turned out to be losing," the TV channel said. In particular, there is a cooling of relations with Saudi Arabia. It also indicates that the US administration has previously made "miscalculations" in Libya and Syria. The United States is also in disarray with Turkey: it has become a “headache” from the allies. In addition, the USA by its actions in the Middle East provoked a migration crisis in the EU. Finally, tensions with China and Russia grew.

3. Economic crisis. "All this is happening against the backdrop of the economic crisis associated with the American system of consumption," says "Living target." After all, the US banking system has allowed American citizens to “actually live in debt,” and this led to an inflating of the “financial bubble” and mass poverty. The channel cites reference data: the total US debt exceeds 58 trillions of dollars. In recent decades, the United States lived mainly at the expense of foreign borrowing. Many states are "economically untenable."

The course of the United States in the coming years will determine the outcome of the upcoming presidential elections, says "Living target".

"If the problems of the USA reach a critical mass, the consequences will be disastrous for the whole world."

Todd Buchholz is talking about the same thing - the specialist who once gave economic advice to George W. Bush. Now this person writes books and predicts the collapse of the United States. The expert counted as many as five factors that could destroy the United States. Factors lists the portal “To lead. Economy".

According to the expert, big and rich countries after prosperity will face a period of depression and even collapse. In particular, the United States has very little time left. Whoever becomes president, he will have to "make tough and effective decisions to save the country."

Here they are, five menacing factors.

On average, one American gives birth to a 1,89 child. But how to maintain high standards of living with such a low birth rate? Service requires migrants. But there is a minus: migrants can split the dominant culture. One of two things: either a decline in wealth or a dilution of culture. The great empires of the past also faced this problem. They could not solve it.

Open trade has a downside: the erosion of the customs and character of the nation. Donald Trump, for example, asked himself: are trade agreements such as the Trans-Pacific Partnership aimed at increasing the income of ordinary Americans, and not at inflating the self-esteem of the president?

3. The growth of public debt.

Countries are getting richer and ... inflate debt bubbles. Buchholz considers this phenomenon a “theft paradox”. If the family becomes richer, then the probability of bankruptcy or getting into large debts is reduced.

However, if we are not talking about families, but about states, the opposite will be true: rich countries accumulate huge debts, many times greater than the debts of poor countries. Politicians of rich countries quietly borrow, knowing that they "are not responsible for the debts that they leave to their children and grandchildren."

Buchholz writes that the number of adults in the United States who wish to work has decreased over the past seventeen years. In West Virginia, only half of the working-age population is employed. And one more fact: from 2000 to 2013. The number of applications for disability in the US increased by 43%. The probability that the judge will approve such an application, with 1980, increased by 50%.

5. The problem of patriotism.

Unless rich states are imbued with national interests and a national spirit, they will not survive. Buchholz writes that in the USA Christopher Columbus, pilgrims and even George Washington are not considered symbols of geographical discoveries, religious freedom and courage, but are despised as robbers. 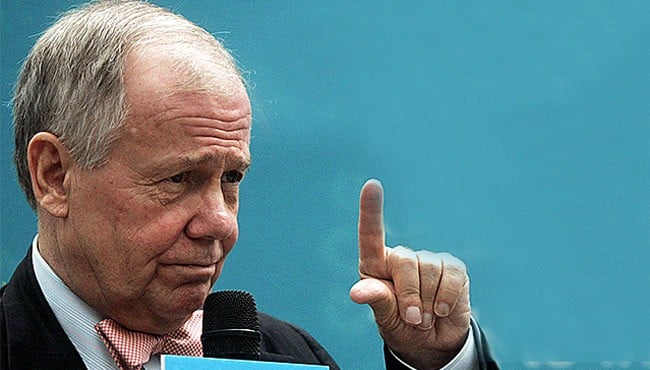 American billionaire Jim Rogers spoke on the topic “Everything is bad in the USA”. He is confident that other states will follow the declining US economy. “The world will fall apart,” says this rich man. As for the USA, the billionaire gives them two or three years, not more. Next - the collapse.

“The problem is that the world will face serious problems in the coming years, they will arise in the United States, Europe, Japan, this will affect all countries. At the same time, Russia has already passed the bottom, there will not be a fall here, but there is no reason to expect any great success either, because the world will fall apart, ”Rodgers said in an interview RBC at the St. Petersburg International Economic Forum (SPIEF).

Rogers recalled that the USA is the largest debtor in the world stories, and debt rates are artificially low. But that will change, and "we will all see many bankruptcies in America, including the bankruptcies of some states and cities." "It will be a nightmare, and we should be very concerned about this." The nightmare will end with the "collapse of the American economy."

And the expert's forecast: “The next two or three years, the dollar will grow until it finally becomes a bubble, but I hope that I have enough sense to get rid of dollar assets before it bursts.”

What is the exit of the rich man? Invest ... in Russia.

In the interview RBC He said that you need to invest in rubles and in Russian agriculture. “Now I myself invest in Russia, I like it here, I see huge changes associated with what happened in the Kremlin, they realized that Russia needs foreign investors, people with knowledge, expertise, and now this is a completely different country, very attractive, ”said the billionaire, skeptical about the idea of ​​investing in Russia before 2012.

“For example, I have Phosagro shares,” the investor noted, “and now they are trading at historic highs, like Moscow Exchange shares, I am surprised and very pleased.” “We can say that the events in Ukraine led to a certain deviation, many things changed, led to the fact that a lot of capital was withdrawn from Russia, the ruble showed poor results,” he added. “But I see a lot of opportunities: you need to buy at the bottom and sell at the peak.”

“I am very optimistic about agriculture all over the world, including in Russia, I would even say, especially in Russia. You know, it’s in ruins, there are a lot of opportunities, now smarter people are starting to engage in this, investing money, bringing equipment, and the situation with Russian agriculture will improve. Instead of doing journalism, you should consider becoming a farmer. ”

So, dear readers, even if a journalist from a non-poor RBC company is given advice to go to the peasants, then what should a mere mortal do from Military Review? Do not be surprised that the articles on the site will be less and less: someone needs to process the fields - follow the advice of a billionaire. You look at the peasantry and get rich.

But seriously, the talk of decay, collapse and disintegration of the United States has been going on for a long time, and sometimes it seems that just now ... Why, what a thing: the mentioned Mr. Rogers still keeps his wealth not in rubles, but in dollars!

As for farming in Russia with its bureaucratic lawlessness, “raiding” and risky farming zone, it is far from a convenient and profitable occupation as in the USA, where it is also generously subsidized from the treasury. That is why at one time the “Bush legs” came to us; no reverse processes were observed.

That's all for today. The author went to spud potatoes.