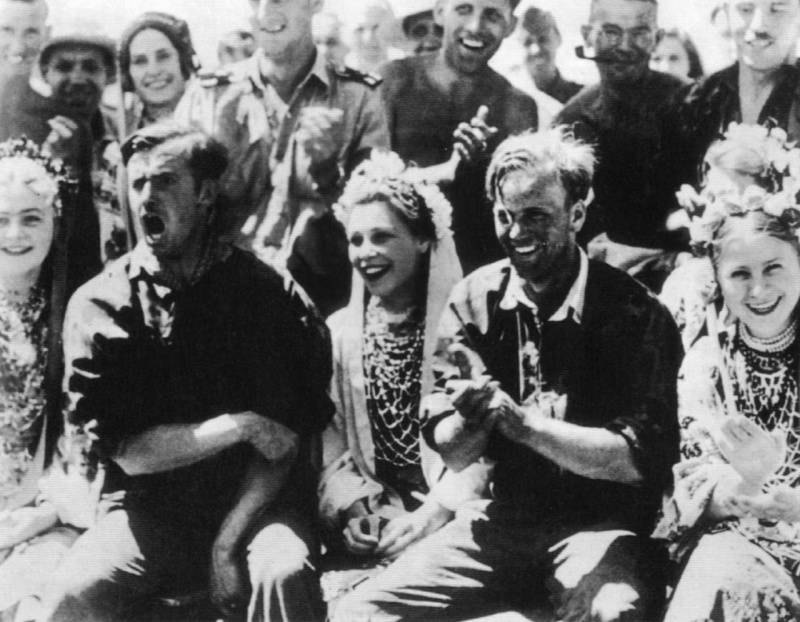 Shot from the film: Lyuba Shevtsova famously dances her fierce dance before the sprawling, swaggering, drunken Wehrmacht officers, and at this time the Young Guard guys are harming the German occupiers. It was in Ukraine that most of all were the theaters and amateur groups that appeared before the invaders.

Nazi aggression against the Soviet Union was accompanied by the development of a whole complex of not only military, economic, administrative, but also cultural propaganda activities in the occupied territories, aimed both at implementing the goals of the occupation policy towards the local population and at ensuring the proper morale of the Wehrmacht military personnel. A certain place in the arsenal of the means used was occupied by theatrical art.

The conditions of wartime, the peculiarities of the regime in different zones of occupation, ethnic specificity led to some peculiarities of cultural and, in particular, theatrical politics in the occupied territory. 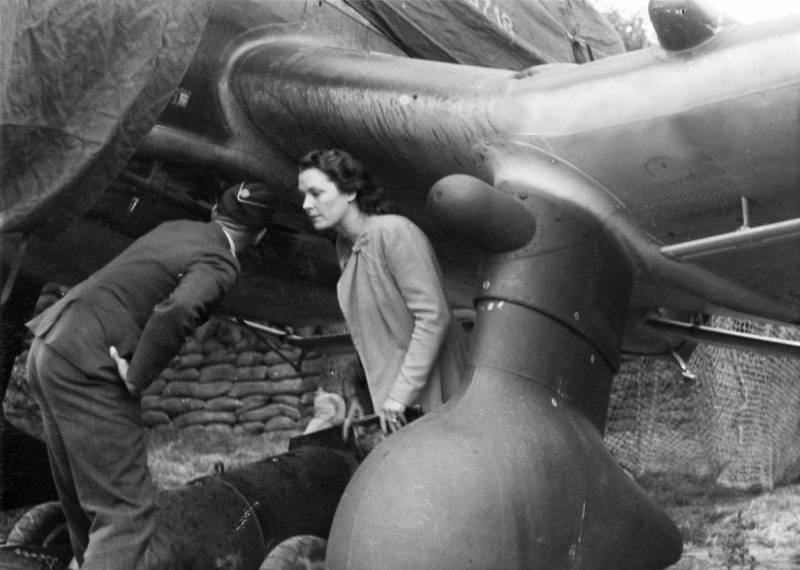 According to the plans of the Third Reich Propaganda Minister Joseph Goebbels, the German theater groups acting from the organization “Strength through Joy” (“Kraft durh Freude”, hereinafter KdF) were responsible for providing the Wehrmacht units at the front and rear. By the way, the same organization belonged to the liner "Wilhelm Gustloff", which became for the Nazis the embodiment of the ideal ship. This “ideal” in 1945 destroyed the torpedo attack of Alexander Marinescu. 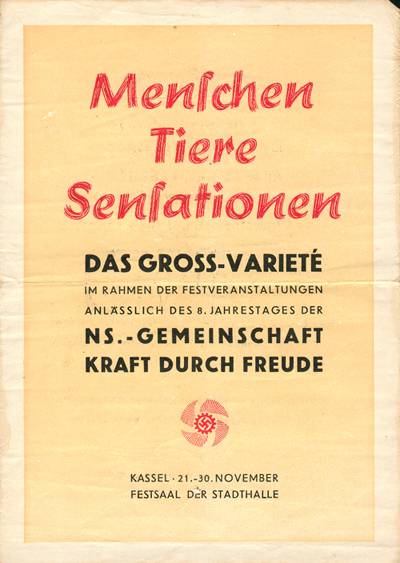 How so! They loved to rest after arduous battles and many hours of shooting of the civilian population. They had to rest in the company of friends and artists. 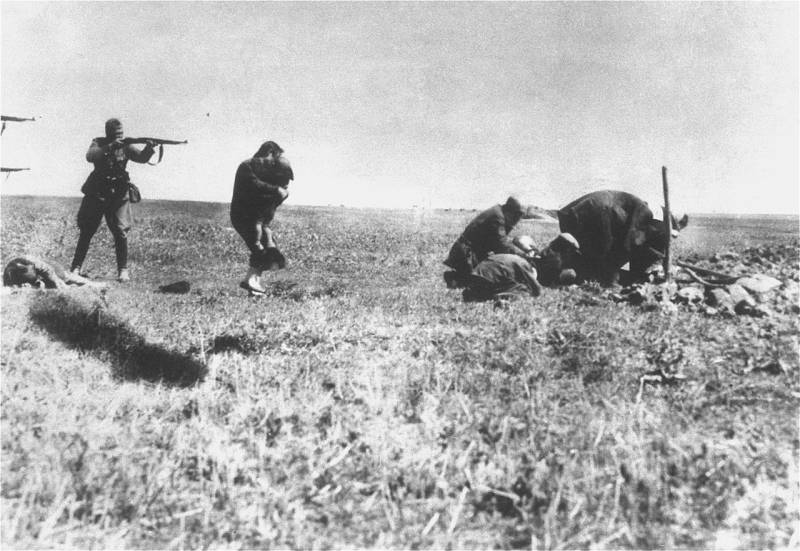 For this - what kind of foresight! - KdF was created, which initially had quite good goals: to provide organized leisure for the German labor force. True, in the center of the emblem of the organization has already turned black swastika, from which the blood-red traces spread around. The fascists lured the workers into their organization, promising them to travel on liners to the shores of Norway, Spain and Italy, organized excursions, concerts, theater and opera performances, art exhibitions. The Nazis kept their promises then. True, then, already on the eastern front.

The implementation of theatrical policy in the occupied territory, including under military control, was also influenced by the Reich ministry of the occupied eastern regions led by Alfred Rosenberg through the special headquarters “Theater” created in the press and propaganda department of the ministry in 1942.

However, the key factor that determined the parameters and possibilities of using the means of theatrical art in the region during the entire period of occupation was the Wehrmacht, its propaganda structures. As noted in the draft “Guidelines for the activities of departments and propaganda teams in the occupied areas of the Soviet Union,” “theater and musical life, as well as other areas of art (ballet, variety, etc.), must be constantly monitored, they need to be influenced and managed in our interests. ” This implied the use of theater groups in the occupied territory for the purpose of cultural support of the local population and the Wehrmacht.

The work of the theaters would have been impossible without a request for this form of cultural life from the local population and local initiative. The organization of professional theater groups was the result of the activities of initiative groups or local self-government bodies (city and district governments), which, in solving such issues, were in direct contact with the military authorities and required their approval.

Theater establishments on the territory of Ukraine began their work soon after the occupation began. This process went much faster in those places where even before the war there were professional theater groups. The first autumn of 1941 of the year, Yuzovsky resumed his work (before and after the occupation - Stalino, and from the middle of 1961 of the year - Donetsk) the Ukrainian Music and Drama Theater. From the middle of 1942, it was renamed the City Opera and Ballet Theater, and since July, 1943 received a new status and name - “Frontal Opera Stalino”.

Around the same time, theaters in Kharkov and Mariupol began to work. Theater groups, professional or amateur, during the occupation operated in other cities and towns.

How so! German soldiers had to rest after the arduous work of shooting civilians. They loved to rest. The theater management system had to meet the goals of ensuring cultural recreation for Wehrmacht servicemen and ensure that the scene was not used for political purposes. In the U Propaganda Department Report (Ukraine) of September 1 of 1942, the need to supervise the activities of theaters “with a view to preventing their use for reactionary tsarist, Great Russian, Ukrainian nationalist and Bolshevik purposes” was explicitly stated.

All key issues of theater activity were resolved only in agreement with the occupation administration. Ensuring proper control over the work of theatrical institutions was entrusted to theater bosses, who were appointed from among officers of the commandant's offices. In some cases, the German military, who had certain professional knowledge, in parallel served as directors or artistic directors. For example, in the Yuzovsky Music and Drama Theater, the former actor and director of the Munich Opera, Tony Grashberger, was appointed artistic director.

Theaters operating in the hone of the military administration, as a rule, were subordinate to the city government. They, in turn, were supervised by local commandant's offices or propaganda agencies. At least one of the theaters, the Yuzovsky Music and Drama Theater, was subsequently completely directly subordinated to the garrison commandant's office Yuzovka, during which even a branch of the city theater was created. This was done because the theater in Yuzovka acquired key importance in the speeches in front of Wehrmacht soldiers on the entire southern wing of the Soviet-German front.

Work with the soldiers of the Wehrmacht became the main goal of theatrical institutions. This is confirmed not only by the Nazi program set-up in matters of cultural policy in the occupied territory, but also by the information on the theaters' current work: the number of visitors — German soldiers, and theater group visits.

A significant role in the organization of productions for Wehrmacht soldiers in Ukraine was played at the end of 1941 by the initiative of the 17 Army headquarters (its rear area at that time included part of the Stalin, Kharkiv, and Dnepropetrovsk regions) theater, created mainly from the residents of Gorlovka, Dzherzhinsk and Stavyansk . Considering that one troupe was not enough for a performance before the fascist army dispersed on a wide front, the German propaganda department ordered that three more theater groups be organized in Lozova, Kramatorsk and Konstantinovka. However, due to the Soviet offensive, the troupe created in Lozovoi was dissolved in January 1942, having managed to give 26 performances for 13 400 to German viewers in Lozova, Kramatorsk, hospitals, wounded collection points for a month.

Trips to the front of theater and concert brigades, specially formed from the troupe of stationary theater institutions for performances in front of German and Italian military units, were widely practiced. So, in April 1942 of the year already the fourth brigade of actors of the Yuzovsky Music Drama Theater and the Variety and Miniatures Theater as part of 30 people visited the German front parts with concerts. As of October 1942, the concert brigade of the Mariupol Theater named after T.G. Shevchenko under the direction of I. Yagupova gave 122 a concert directly at the front.

The German command liked the work of theater groups. In addition to the brigades formed from the stationary theaters, the Wehrmacht units also served small amateur groups, which, as a rule, in the reports were called groups by the name of their leaders. In the spring of 1943, active work in the 1st tank Wehrmacht armies carried out groups of Korolev and Tkachenko. In addition to them, two variety theater groups created in Chistyakovo (now Torez) and Krasniy Luch performed in parts of the 17th Army Corps.

During 25 March - 7 on April 1943, the Korolev group in the rear zone of the 40 tank corps performed 16 performances with the total number of viewers in 2270 people. In the period from 1 to 16 on June 1943 of the year in the 17 zone of the army corps, which was stationed in the Donbass, the Shevelev concert group gave 19 performances with 4785 spectators.

The entire repertoire was viewed in advance by the responsible persons of the commandant's offices.
Visits to theaters became a peculiar form of encouraging German soldiers, who were taken to performances and concerts right from the front line by organized groups. That was how the servicemen of the units that occupied the defense on the Mius-front visited theaters in Yuzovka and Taganrog. Especially intensive trips were carried out in the spring and summer of 1943, for which a permanent route was even developed. And then the Germans stopped carrying the performances - the Soviet troops gave them a real theater of military operations and showed who the main character was at the front.
The repertoire, which was staged on the stages of theaters, depended on the level of qualifications and number of the troupe, the availability of appropriate premises and props, the tasks that the occupational power set before the theater institutions.

At the same time, there were cases when performances by local bands were considered as undesirable. Indicative in this regard is the situation that developed in the summer of 1943 of the year in the rear area of ​​the Wehrmacht 6 Army. Thus, the proposal of the commander of the propaganda company No. 695 to speak in front of the troops at the front, provided that the program was thoroughly checked and divided according to the principle: “suitable only for Germans”, “suitable only for Russians”, “suitable for both”, the command of the 294 Infantry Division rejected resolution that it will lead "only to Russification, against which we will have to fight by all possible means."

The sources available today that characterize the degree of influence of Ukrainian culture and, in particular, theatrical art on Wehrmacht soldiers, are quite contradictory. This is due, obviously, not only differences in aesthetic perception, but also the degree of political engagement of sources and their creators. Indicative in this regard is the characteristic of theatrical productions in Kharkov. According to some of the fascists who attended theaters in Kharkov, “oddly enough, the Kharkov theater performances were not bad at all”, “Today the local ballet is dancing in the opera house crowded with soldiers. When the people of this country begin to sing and dance, it is like an awakening from a deep stupor. They completely succeed in reincarnation into something danceable, which Western dancers often cannot do. ” A rather positive assessment of the speeches of Kharkov actors was also contained in one of the reports of the propaganda department “U” for March 1942 of the year.

Of interest is the program of leisure activities on the occasion of the visit by the commanders of the occupying troops of Hungary on the Eastern Front, General Vitez Bakay, to the commander of the rear area of ​​Army Group B, General Erich Friderichi, in Kharkov in October 1942. So, Bakai was supposed to visit St. Nicholas Cathedral, as well as the opera Aida. And during the inspection visit of the commander of the rear area of ​​Army Group B during 6-15 in September 1942, it was planned to visit theaters in Stalino and Mariupol. In July, 1943, the Wehrmacht 6 Army Chief of Staff, describing the work of the local theater in Yuzovka, boastfully stated that "through the joint cooperation of the German and Ukrainian forces, the front-line opera, despite the war, is on a remarkable, promising rise."

The famous Ukrainian ballerina Elena Gorchakova, who danced in front of German soldiers and officers, then took a long time offended by the Soviet authorities, who did not give her the title of People's Artist of Ukraine. In order to justify her actions, Elena Petrovna said that, by working for invaders, she provided herself and her loved ones with food. The same excuse came up with for themselves the heads of theaters, individuals who influenced the personnel and repertoire policies in theaters. But they were convicted under the laws of the Soviet state.