The threat from "SAMP / T" at the Russian borders is underestimated 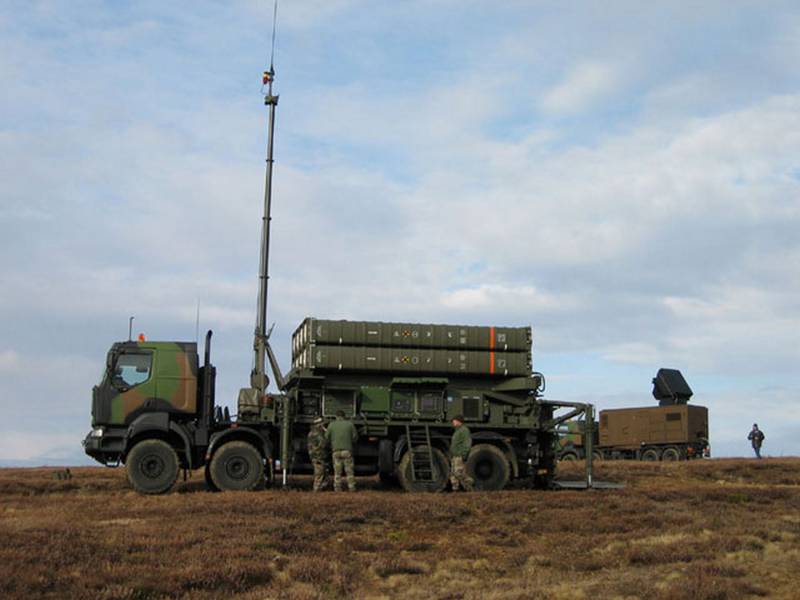 The main firing element of the SAMP / T anti-aircraft missile system is the Arabel multifunctional radar station. Passive phased arrays as well as an antenna post drive allow scanning the airspace in azimuth at a speed of 360 degrees / s (60 rpm), scanning in an elevation plane takes place by the electronic transfer of the PPAR beam. "Arabel" has a fairly high computational capabilities, providing bandwidth in 130 EC in tracking mode on the aisle, and 10 air targets in capture mode (target designation). But this MRLS has serious drawbacks before such MRLSs like our 30H6Е / 92Н6Е or American AN / MPQ-53. In order to provide a single SAMP / T battery for a full-range air defense system, the French Thomson-CSF specialists were forced to make the X-band "Arabel" antenna post rotating, which does not allow for continuous illumination of the target and forces you to rely only on the active radar GPS SAM family "Aster". During 10 airborne missiles, when part of the missiles intercept targets in one direction, and the Arabel pattern is temporarily directed in another direction, failure to capture the ARGSN Aster-30 target at the moment of approaching the target may result in a miss The MRLS at this point may not correct. Due to the use of active radar homing missiles, the width of the main beam of the beam is 2 degrees, which is greater than the "Three Hundred" and "Patriots" RPN, the accuracy of the latter is much higher. But the Arabel MRLS also has a significant advantage: the viewing sector in the elevation plane is from -5 to 90 degrees. This allows you to: detect and attack low-altitude targets even with humiliation relative to the MRLS (in case the battery is deployed on a small hill), and also intercept air attack weapons that attack from vertical directions. For example, the RPN 30Н6Е has a sector of view from 5 to 64 hail, which has serious consequences in the fight against the ALARM "ALARM" and other WTO, approaching from above

In numerous Russian media, you can find a lot of information regarding the deployment in Eastern European NATO member states, as well as in the Far Eastern allies of the United States of American anti-aircraft missile systems of the territorial missile defense system "Patriot PAC-2/3", as well as exclusively anti-missile systems of the regional missile defense system "THAAD ", But there is practically no information about the plans to pull the SAMP / T air defense system to our western borders. The first example of the use of SAMP / T to counter the Russian Aerospace Forces is the dispatch of the Italian SAMP / T to the Syrian-Turkish border, where a fairly large NATO military group is deployed within the framework of the Turkish military support program, represented by Patriot complexes, electronic warfare systems as well as their logistic support. The version officially announced by the French magazine Air & Cosmos says that the deployment of air defense systems in southern Turkey is necessary to repel possible missile strikes from ISIS, nevertheless, the transfer of the complexes began precisely after the deployment of the Russian contingent in the SAR, in particular the Iskander OTRK "And super-maneuverable multipurpose fighters of the" 4 ++ "generation Su-35S, and just think about why Ankara would ask to form a missile defense system from a terrorist organization, which it also sponsors.

The Patriot PAC-2 / 3 and SAMP / T complexes can intercept a decent range of ultra-small air-assisted maneuvering aids, aided by the gas-dynamic control system and ARGSN of the ERINT and Aster-30 missiles, but the OTBR 9М723-1 of the Iskander complex. M will obviously be too tough for the American and European air defense systems, since anti-aircraft maneuvers with overloads in 30 units. They do not allow either the US or the European anti-missile to reliably enter the Russian ballistic missile in the “hit-to-kill” mode. To efficiently intercept a maneuvering anti-missile target, it must have 2,5 - 3 times greater overloads than an attacking EAS. Aster-30 has overloads up to 65 units, which is higher than ERINT (45 units), but all Asters in service have another drawback that affects the accuracy and capabilities of the SAMP / T complex anti-stealth objects.

The ERINT interceptor missile is equipped with an ARGSN millimeter part of the Ka-band (more than 30 GHz), which makes it possible to more accurately point out small, inconspicuous targets, the Aster-30, with its best maneuverability, has a centimeter-wave ARGSN that slightly reduces the accuracy of the "hit-to-kill" mode. For this reason, the French and Italian divisions of the Eurosam consortium will soon be attracted to the deep modernization of the Aster-30 guidance system.

An agreement on the joint development of a new active radar homing head was signed between the Ministers of Defense of France and Italy on 14 June 2016. A full upgrade of the e-filling of the new Aster block 1 New Technology anti-aircraft guided missile is envisaged: the rocket will receive ARGSN of a millimeter Ka-band, which will bring the Aster-30 to a more perfect level than ERINT. With a greater target range (120 km compared to 80 km), the new Aster block 1 NT will be able to intercept any ballistic targets at distances more than 50 km, because the missile has ARGSN and can be launched on target designation in the direction of enemy ETS for anticipation (more prior to its entry into the affected area of ​​the SAMP / T complex or its shipboard analogue PAAMS). The ground infrastructure of SAMP / T is also planned to be improved. Apparently, it is planned to upgrade the processor units, as well as buses for data exchange between the new Aster missile system, the Arabel MRLS, and the command and control center of the complex. All modernization measures will help not only to more accurately capture small-size hypersonic elements of the WTO, but also to expand the maximum speed of the targeted target.

Over the next 10-15 years, it is planned to gradually develop several new versions of Aster-30, capable of intercepting even more modern and long-range ballistic missiles. So, if the “Aster block 1 NT” is capable of intercepting OTBR with a range of up to 1000 km, the Aster block 2 version will be able to hit medium-range ballistic missiles (up to 3000 km). Both the first and second modifications will already be a threat to the fire protection system of the Iskander-M family; The modernization of the transverse-control gas-dynamic engine unit, as well as the strengthening of the rocket body with the use of new high-strength materials, which may increase Aster overloads to 70-80 units, is not excluded. The deployment of SAMP / T complexes equipped with these missiles in the Baltic States, Poland, Georgia, Sweden or Finland can create serious inconvenience to Iskander, Polonaise and other missile systems on duty in the Western and Southern military districts. 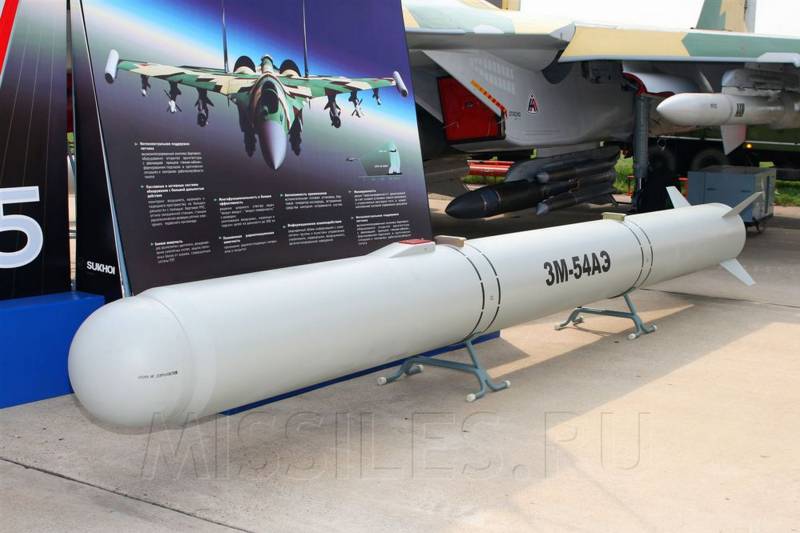 And again the anti-ship Caliber comes to the aid of the Russian HVAC. In addition to the promising unobtrusive operational-tactical ballistic missile with non-detachable warheads, the 533-mm anti-ship missiles of the Caliber-A / NK can be the prototype for the new versions of the Patriot and SAMP / T. 3М-51 Alpha and 3М54А versions. The three-stage anti-ship missiles have a range of up to 250 km and a supersonic 3P52 combat stage, which develops ground / water speeds up to 3050 km / h. Like all promising "Calibrov", including strategic 3М14Т, Alpha and 3М54АE have a large part of the structural units represented by composite materials, and the combat stage has several times smaller physical dimensions than the Iskander-M missiles, respectively, 3 EPR -wheel stage does not exceed 0,05 m2 and it is very difficult to intercept it in low-altitude mode, considering that today Arabel MRLS is not being built on universal towers. The development of an air-to-ground / ground-to-ground missile can occur by analogy with a land modification of the BrahMos tactical missile being tested in the Indian Armed Forces

To counter the upgraded “SAMP / T”, it will be necessary to develop an even more modern hypersonic OTBR, the characteristics of which will advance in comparison with the “Iskander”. The radar visibility of the new missile should be several times smaller than that of the 9М723. To do this, a two-stage design of an OTBR should be considered with a detachable warhead, equipped with a gas-dynamic maneuvering system and a module of the anti-missile defense system (KSPPRO), based on a software-controlled multi-frequency radio-electronic jammer and a device for shooting dummy targets and dipole reflectors, which are analogous to modern ones BB intercontinental ballistic missiles. ESR separated from 2, or 1, stage BB is much smaller than the radar signature of a single-stage rocket with an inseparable warhead: even with maximum use of radio-absorbing composite materials, a large number of units and units of the 9XXUMUM solid propellant rocket engine 820XXNNXX of the solid-propellant composite materials and units of the engine compartment of the 9N solid-propellant rocket engine of the solid-propellant rocket engine use a large number of components and units of the engine compartment 723XNXX of the solid-propellant rocket engine of the OTB XNHMXMXHNXX solid-fuel rocket engine various metal alloys are also performed, which at different angles of approach to the interceptor missile may have a certain radio contrast, especially for millimeter ARGSN . However, for a GOS with similar frequencies of radiation-reception, any metal element on the target body or even inside it can become a completely visible target, which once again makes one think about detachable MS and new types of radio absorbing materials.

At the moment, specialists from the Kolomna design bureau of machine building have a few more years in stock to light up the sky over Kapustin Yar with the frightening West with the power of promising OTBR, which does not leave the Aster-30 units with a single chance.