27 2016 June
15
Today I would say that Maria Borovichenko, the future Hero of the Soviet Union, was born in Kiev, on Myshelovskaya Street. And in the distant 1925, it was a small village Mousetrap. Here, in the family of a worker, Masha was born. The girl recognized the grief early: she had only just begun school, when her mother died from a serious illness. Aunt, Evdokia Andreevna Burlatskaya took Masha to herself. Evdokia Andreevna was a kind, fair and honest man. And her foster daughter grew up the same. This is how Burlatskaya recalled this time: “... Mary grew and was brought up with me. I did not have children, so I gave all the affection and attention to her as my own daughter. Maria loved singing, dancing and sport. She was an active participant in amateur art activities at school, dreamed of becoming a teacher or doctor. She was obedient and affectionate ... ”Masha made a choice in favor of a medical case. However, not only by the will of the heart, but also because the nurses were required in the war. It's about 1941 ...

In August, 1941, Masha arrived at the headquarters of the 5 airborne brigade. This is how the Hero of the Soviet Union, General Alexander Ilyich Rodimtsev, who wrote a little story about Masha after the war, recalled it twice: “... In the morning I was informed that two men had crossed the front line to the units, the man and the girl. This report seemed surprising to me: here, on the approaches to the outskirts of Kiev, the fascists concentrated so many troops that even a mouse would not slip unnoticed. How were these two able to cross the front? I ordered to bring them to the command post ... "

“These two” - Masha and her uncle, a railroad worker who was not taken to the front because of a weak heart. They got to their place at great risk, at night. They hit the same fascist, Masha's uncle had to grab hand-to-hand, and at that time the girl threw herself at the enemy’s feet to restrain his movements. As evidence, Borovichenko brought epaulets of that German.

The girl asked to take her to her nurse.
- And where are you from? - asked Rodimtsev.
- From the Mousetrap. I beg you.

Masha not only asked. She brought with her the most valuable information about the location of the enemy guns, which she herself extracted (for several days, watching, she sat on the dovecot near her house, and then, pretending to carry dill to the Nazis, walked around the Mousetrap). And very soon, thanks to the machine data, our artillery destroyed the enemy machine-gun points in the area. On the same day several fascists were captured.
- Your guns can see! - one German repeated to the translator, completely confused. - They covered our machine-gun and mortar batteries from the first volley ...

So Maria Borovichenko became Mashenka from the Mousetrap, a military nurse. She was enrolled in the state of August 11. And two days later, a fragile, low girl carried on herself from the battle of eight fighters, she had a trophy pistol sticking out of her belt. On that day, Masha disobeyed the order of Captain Simkin, remained on the battlefield and continued to help the fighters. And saved the life of the captain himself, who was seriously wounded. Simkin himself could not resist the Germans, who decided to take him prisoner. And the girl was not taken aback, she arrived in time, shot the fascists and brought Simkin out of battle.

Soon the Mousetrap was cleared of the enemy - Masha could return home. But remained in the ranks ...

Her courage astonished the fighters. It seemed that Masha from the Mousetrap had long been at the front; she was an experienced soldier. In the battle for the Agricultural Institute, yesterday's girl captured the German corporal. He considered himself an experienced soldier, fought in Poland, France, Norway. And in this battle I only dropped my helmet, leaned over to find it in the grass, and when I got up, I saw the barrel of a machine gun in front of me. After the interrogation, the corporal could not come to his senses and believe that almost a child had taken him prisoner. 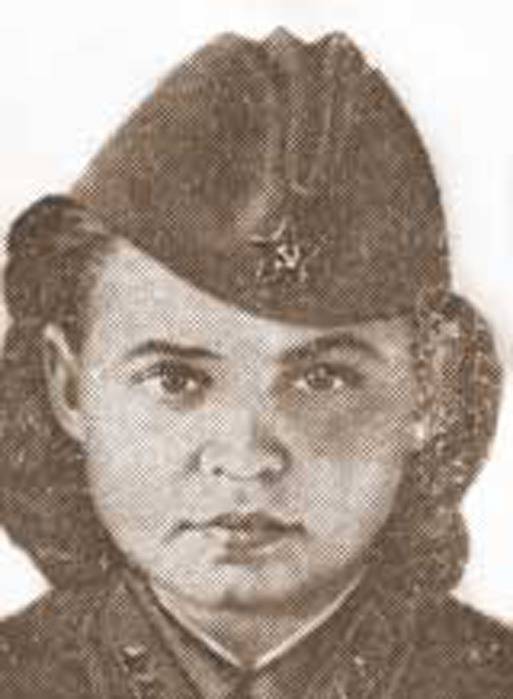 In September, in battles near Konotop, she saved twenty fighters who needed medical assistance. The enemy desperately rushed to cross the river Seim, but this plan tore off an unexpected powerful machine-gun fire. The place to install the gun was chosen very well: behind the bridge, on a cliff. It was Masha who, assisting the wounded, took a stand. Helped the machine gunner Ivanov to install a machine gun at the height of the river Seim and from there to fire at the enemy. This decided the outcome of the battle - in this area the enemy failed, the task was completed. Masha got out of the battlefield, and there were tears from bullets on her overcoat. “You're like a bewitched girl!” The fighters joked.

Or another case. Maria participated in the raid on the enemy’s rear near the village of Gutrovo. During this raid, our soldiers destroyed about two hundred fascists, about a hundred trucks, brought a prisoner officer and brought one car. This is how Senior Lieutenant Sabodakh recalled Masha, who led the raid: “What a girl - not a shadow of fear! Under a hail of bullets carried out from the battlefield wounded Sergeant Bugrov. And when a fascist officer rushed to her, she laid him out of a pistol. She was in battle all the time. How she hurls grenades! I especially remember the minute when we broke into the classroom from the corridor. Some brigand knocked the machine gun out of Masha's hands. What do you think confused? Not at all! I rushed to the floor, the German machine gun picked up and let's finish the fascists ... "

As part of the 13-th Guards Rifle Division, Masha fought for Stalingrad. She was awarded the medal "For Military Merit" and the Order of the Red Star. There, near Stalingrad, in one of the battles, Masha met the senior medical assistant of the health company of the 34 Guards Rifle Regiment, Mikhail Kravchenko. It was a dashing guy, everyone said he was desperately lucky. He played the accordion, sang.

Young people love each other. From now on, they were almost never separated - together on the battlefield and in moments of calm. But the luck that took Mikhail so long to take care of, for a moment, turned away just a minute ... And this was enough for a German sniper to get into Misha. Masha and at this time was near. She managed to throw herself on the ground, stick her hat out from behind a cover and thus understand where the fascist was aiming from. I managed and successfully threw a grenade into this place. But her Misha returned to life could not ...

... She died on July 14 1943, in a battle near Oboyan, in front of her fellow soldiers, covering the wounded Lieutenant Corniek. Right under Masha’s feet, a shell exploded - and the lieutenant was still alive. And this feat of the girl caused such pain and rage in the hearts of fellow soldiers that, as one, they rose to the attack - for their Masha, who did not have time to live. They buried a girl in the village of Orlovka, Belgorod Region.
Masha wanted to be a teacher. And Misha is a doctor.