The economic "bouquet" of post-Soviet Moldova

27 2016 June
37
"Military Review" continues to publish materials on economic and demographic issues in the post-Soviet countries. Next in line is Moldova, which recently has come to power, seeking to hook, by hook or by crook, to drag the country into the bosom of the “blue dream” - the European Union, being willing to let such an introduction, dragging and pulling into as part of Romania. This is understandable - if even the judges of the constitutional court have Romanian passports in their pockets, then another declared course is poorly predicted.


Last week German radio station Deutsche Welle presented a material that reflects one of the segments of Moldovan demography. This is a migration crisis. And if for the EU countries the crisis is the influx of migrants from other countries, then for Moldova everything is exactly the opposite. The country itself is a migrant donor, becoming empty at a frightening pace.

If you believe the information of the mentioned German source, which, by the way, refers to the Moldovan press, then official Chisinau has something to think hard about. 106 people leave the country daily. About 20% of this number do not return back to Moldova at all, and the rest, if they return, only in short breaks in work on the territory of foreign states. With a country's population of less than 3 million (according to the 2014 census, together with the Transnistrian Moldavian Republic), last year 2200 left Moldova for permanent residence abroad. According to Moldovan sources, every third of this number is a specialist with a sufficiently high qualification (doctors, teachers, employees of the banking sector). Moreover, there is a tendency according to which the number of people leaving for work or permanent residence from the Republic of Moldova increases annually, and we are talking mostly about young people. In the first half of this year alone, the number of Moldovan émigrés was about 19 thousand. This is the approximate number of such cities of Moldova, as, for example, Drochia or Falesti.

Over the past 12 years, Moldova has lost more than 17% of the population (a reduction from 3,5 million to 2,9 million citizens). This is a real demographic failure, which exacerbates the already complicated situation in the Moldovan economy.

Where are the citizens of Moldova going, whose leadership continues to insist that the majority of the people in the country approve plans for European integration and contacts with the North Atlantic military bloc? The leading position among the countries that choose Moldavian citizens leaving for work and for life is the Russian Federation. Of the 2,2 thousands of 1 citizens who left the Republic of Moldova, a thousand people decided to settle in Russia (these are Moldovan statistics). Statistics FMS of the Russian Federation says 5 thousands of citizens of Moldova who moved to relocate to Russia under the program of resettlement of compatriots. The three most popular among Moldovan citizens are Israel and Germany. Already among the Russian regions to which the Moldovans go, Moscow, the Moscow region and the Voronezh region are leading.

The first powerful blow that the demographic trend has inflicted on the country concerns an aging population. For the countries of the European continent, such a problem is almost universal, but in Moldova the situation is close to critical. The National Social Insurance House of Moldova publishes data that the number of pensioners in the country has reached 82,5% of the working population (660 thousand and 800 thousand, respectively). The massive outflow of young people from the country, according to the statistical services of Moldova, by the year 2020 can lead to a collapse of the pension system, since each retired person will have one pensioner.

To try to fix something in terms of accumulating funds of the pension fund, a legislative initiative to raise the retirement age has already worked in the country. Women in Moldova go on a well-deserved rest in 57 years, men - in 62. And this is against the background of a significant level of unemployment in the country. In 2011, almost every tenth citizen of the country was officially considered unemployed. Currently, the Moldovan unemployment rate is approximately 7%. It would seem that not so much, but the fact is that the figure is somewhat evil. After all, the able-bodied and young population of the country leaves Moldova, and the unemployment rate takes into account the situation with those who are registered in the employment centers of Moldova itself. In other words, if all Moldavian guest workers returned to their homeland, then the Moldovan statistics services would, by definition, record a surge in the level of unemployment.

After the rise of the retirement age by the Moldovan authorities, the leadership of the World Bank “strongly recommends” Chisinau to go one step further in the pension reform, since so far the retirement age has not had a due effect on the economy. The real sector last year sank more than 3%, and the downward trend continues. The step is to make the same level of retirement for men and women - 62 of the year for everyone. For obvious reasons, this causes discontent among citizens, who are well aware that the authorities in the country are simply unable to find at least some effective measures to reverse the situation in the economy.

So far, the situation in the Moldovan financial and economic system is such that foreign debt has already exceeded 100% of GDP. At the end of 2015, Moldovan and international economic institutions reported on the increased level of foreign borrowing and overcoming the psychological level. According to one estimate, the external debt of Moldova is 100,5% of GDP, according to other data it is 101,4%. This suggests that every resident of the country (including old people and babies) owes foreign banks an amount exceeding the annual average per capita income level. With the constant growth trend in foreign debt volumes against the background of high unemployment rates and the lack of plans for statesmen to improve the national economy, the situation with demography is also unlikely to improve.

And after the results of the British referendum, the question of Moldova’s membership in the European Union, which was issued in Chisinau almost a panacea for all economic turmoil, did “turn over”. We should not forget that today, de facto, there is not even a single Moldavia as such. The issue of relations between Chisinau and Tiraspol is still not resolved in a productive manner. All this heats the already hot summer air of the Republic of Moldova even more, where the support of opposition forces and moods is gaining momentum.

From the statement of one of the opposition leaders of Moldova Renato Usaty (chairman of "Our Party"):
The convenient "European integration", which politicians in Moldova covered up theft and inefficiency, has lost all meaning. 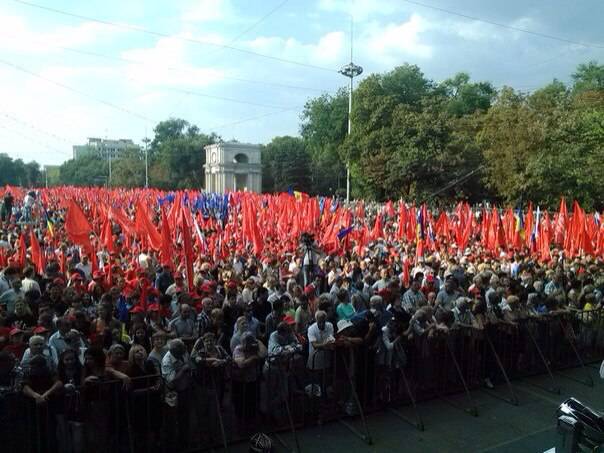 What are the meanings to look for the Moldovan official authorities? ..