Shanghai Cooperation Organization is following the path suggested by Russia

27 2016 June
29
Among the main News In recent days, a special place has been occupied by reports on the anniversary, fifteenth, summit of the Shanghai Cooperation Organization (SCO) in Tashkent. Commentators note that at a meeting in the Uzbek capital, the leaders of the SCO member countries signed a memorandum on joining the organization of India and Pakistan. The Shanghai Cooperation Organization is turning into the Asian Big Eight states, representing half the world's population. 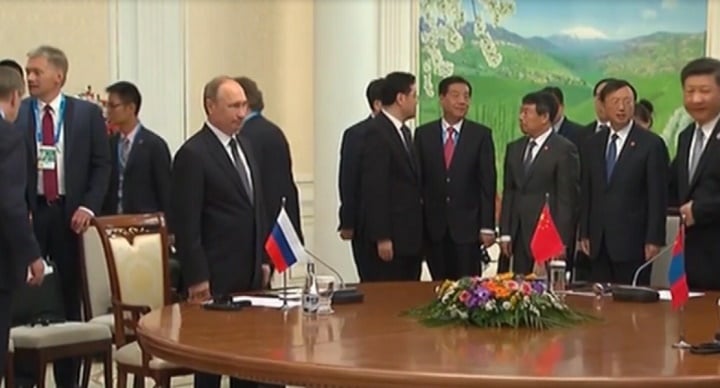 It all started with border disputes ...

The meeting in Tashkent prompted observers to compare the outcome of the SCO summit with the European Brexit. In one case, the organization expands, showing the world its increasing opportunities. In the other, it shrinks, threatening internal degradation, if not a complete collapse.

This lively comparison is just a mirror reflection of the current state of the SCO. Over the years of its existence, the organization has gone a great distance from the resolution of border disputes to deep political cooperation. At last year’s summit in Russian Ufa, which launched the procedure for joining the organization of India and Pakistan, President of Uzbekistan Islam Karimov told Vladimir Putin during their bilateral meeting: “Joining the SCO weapon, - India and Pakistan - will not just change the political map, but may also affect the balance of power in the world arena. ”

Such are the ambitions of the Shanghai Cooperation Organization, expressed by one of the founders of this association of Asian states. By the way, Uzbekistan was the first to join the group of neighboring countries that had earlier begun the process of regional cooperation. It happened in 2001 in Chinese Shanghai. This is where the organization, whose initial tasks were utilitarian enough - to resolve the existing territorial disputes between states, leads its new countdown.

Such a problem arose in relations between the USSR and China as far back as the sixties of the last century. With the collapse of the Soviet Union at the negotiating table with Chinese diplomats were representatives of four states at once - Russia, Kazakhstan, Kyrgyzstan and Tajikistan. In 1996, they formed the Shanghai Five.

The organization discussed border demarcation, mutual reduction of armed forces in the border areas, strengthening confidence in the military field. The Shanghai Five was to complete the Soviet-Chinese border disputes and build new multilateral interstate relations. In Beijing and Moscow, they met in different ways.

China, with its growing claims and production capabilities, saw the prospect of organizing in the economic integration of the countries of the region, largely providing the resource and logistics base of the Chinese economy. The following years showed that Beijing gradually began to implement its plans. Now they have even gone beyond the framework of the SCO. This is evident from the recently established Asian Infrastructure Investment Bank and the Silk Road Economic Belt project.

Russia was pretty cool about the plans of China. At least, Moscow joined the ABII Bank almost on the last day of its formation, and the Russian Silk Road routes were bogged down in numerous approvals and counter offers.

Russia is interested in something else. Moscow saw in the SCO the possibility of turning an organization into a powerful international political bloc. It is possible, of course, to argue about bloody thinking that has gotten the edge of teeth and some ideologization of international relations. However, the world has not yet come up with another option to defend its economic and political interests without the use of armed forces.

Towards an influential international organization


China ceded Russia in 2001, when Uzbekistan was accepted into the organization as far from territorial disputes. The countries of the "Shanghai Five" among the border problems have drawn attention to the threat of international terrorism. Tashkent was also seriously worried. His participation in the organization seemed useful and beneficial. So the topic of communication between countries received a new vector, except for border disputes.

A year later, this was fixed in the SCO Charter, which became the basic document of the organization. There, the main goals and objectives of cooperation have already been defined. The border relations in the Charter were transformed into “the development of multi-disciplinary cooperation in order to maintain and strengthen peace, security and stability in the region, to promote the construction of a new democratic, fair and rational political and economic international order”.

This task was naturally complemented by others, including “cooperation in the prevention of international conflicts and their peaceful settlement; a joint search for solutions to problems that will arise in the twenty-first century. " The Charter adopted in St. Petersburg in Russia finally gave the Shanghai organization a political character.

Other countries are interested in her. Belarus, Mongolia, India, Iran, Pakistan and Afghanistan came to the SCO as observers. Two of them, as we see, have already signed a memorandum on joining the organization.

At a meeting in Tashkent, Vladimir Putin noted Iran’s readiness to join the SCO, and the organization’s general secretary, Rashid Alimov, told reporters in an interview that five more countries had immediately expressed their intention to join the Shanghai organization. Alimov did not specify which countries in question, but drew the attention of the press to the tendencies of expanding the organization and increasing its political capabilities.

However, this process is not so smooth and smooth. He is not devoid of contradictions and even struggle for the balance of power within the organization. The host of the current summit, the President of Uzbekistan Islam Karimov, said this: “The Memorandum of Obligations of India and Pakistan within the framework of full membership, it must be honestly admitted, was complex and complicated.” Karimov noted that during the negotiations, all the contradictions were overcome and added: "India and Pakistan in the SCO should have been taken together necessarily."

There are two points. It is necessary, of course, to take into account the complex, sometimes turning into conflict, relations between these neighboring countries themselves. In addition, India, as is known, on many regional issues supports the position of Russia, and Pakistan - China. Their joint participation in the SCO will smooth over possible contradictions of the two main centers of power within the organization.

The summit declaration adopted in Tashkent has become a full-fledged political document reflecting the position of the SCO on all major international issues, including regional military conflicts, relations between countries, global threats - from nuclear proliferation to terrorist attacks.

In the Uzbek capital, the Shanghai Cooperation Organization showed the world the willingness to solve all major international problems. This largely reflects the position of Russia. Experts believe: Moscow is counting on the fact that the SCO will make a significant contribution to the modern world order, and will have an impact on the political processes in the world.

This is the situation today. She is quite mobile. After the summit in Uzbekistan, the SCO presidency passed to the Republic of Kazakhstan. The next meeting of heads of member countries of the organization will be held in Astana. President Nursultan Nazarbayev of Kazakhstan has already announced his proposals on the current agenda of the Shanghai organization.

Speaking at a meeting of the Council of Heads of SCO Member States on Friday in Tashkent, Nazarbayev noted: within the framework of the organization, it is possible to create a free trade zone. The Kazakh president called this task promising. In his opinion, “The key element here is the infrastructural unification of the hubs of Eurasia through the revival of historical routes of the Silk Road ”.

The President of Kazakhstan proposed to form a Eurasian Transit Transport Hub, which will bring together the member states and the observer countries of the SCO. For its part, Kazakhstan has already created the international financial center Astana and has begun to implement an infrastructure development program that harmoniously complements the Silk Road Economic Belt. The agenda proposed by Kazakhstan is an obvious nod to China's economic plans.

The current position of Nazarbayev may affect the dynamics of the political construction of the SCO. However, the organization’s goals stated in St. Petersburg and now, in Tashkent, leave no doubt to the experts: the Shanghai Cooperation Organization is becoming a serious international center of power. Her word on the planet every year will sound stronger, and the time is not far distant when the SCO will completely outgrow the framework of regional influence.

Ctrl Enter
Noticed oshЫbku Highlight text and press. Ctrl + Enter
We are
Trojan horses in the SCO?Pakistan and the United States: can not be friends
Military Reviewin Yandex News
Military Reviewin Google News
29 comments
Information
Dear reader, to leave comments on the publication, you must sign in.