Bitter "Wax": Bryansk-wheel drive vehicles that did not go into the series 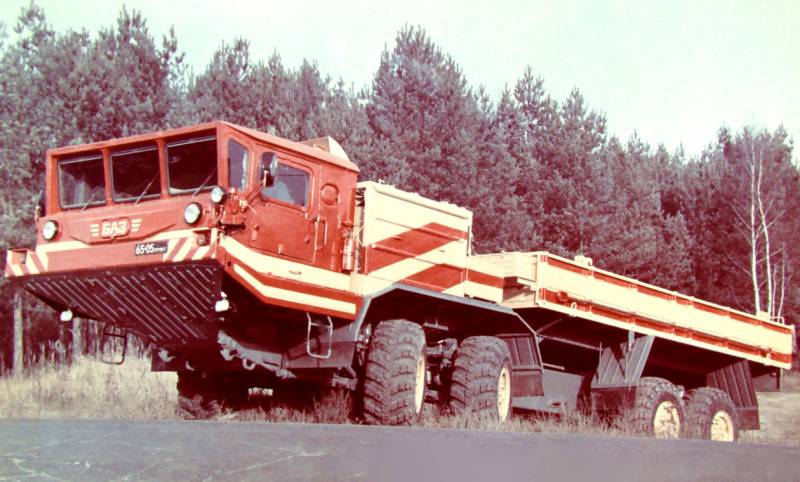 From the beginning of the 1970-s to the end of the 90-x, the special design bureau of the Bryansk Automobile Plant has developed several families of four-axle multi-purpose terrestrial vehicles. They were also created within the framework of the experimental design theme “Basis”, but gradually the incomprehensible military code “Voshchina” spread over them - so-called thin wax sheets for bee honeycombs. 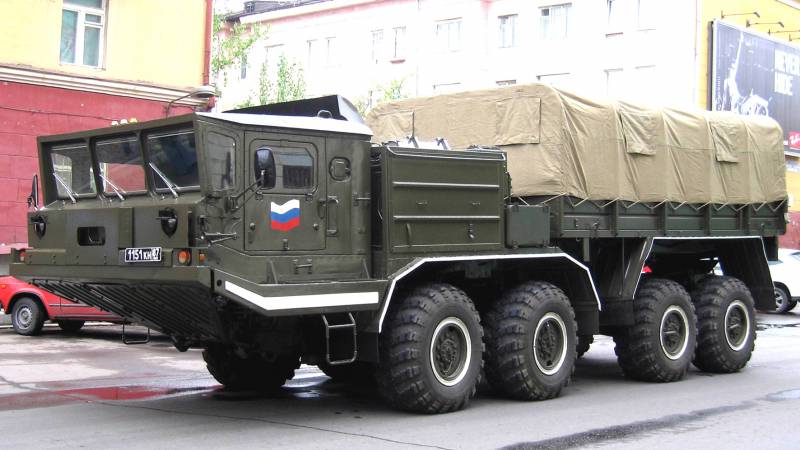 Artillery tractor BAZ-69531 in the Armed Forces of Russia (photo by S. Andreev)

All these secret machines were created in the harsh conditions of the “iron curtain”, the lack of domestic units and materials, constant rushing from one layout to another and the difficult search for new solutions. From a constructive point of view, they were an intermediate link from the legendary 135-series to more advanced cars with one power unit and independent suspension, although archaic transmission onboard remained for a long time on them.

In 1980, destructive restructuring and disarmament were added to technical issues. As a result, despite the tremendous efforts, this technique did not justify itself, it was not mass-produced in the Soviet, and later, the Russian army did not receive wide distribution.

In the middle of the 1970-s, the Bryansk Automobile Plant secretly presented prototypes of its future heavy BAZ-6950 ground range of the “Osnova” family with the wheel formula 8х8 for transport support of the Soviet army. All work was carried out under the direction of the chief designer Ivan Ludvigovich Yurin, the leading designer was A. S. Koptyukh.

Until the new fiberglass cab was ready for future cars, the first in 1976 was the 12-tonne truck BAZ-6952 with the all-metal cab from the MAZ-537 tractor. Then a test batch was assembled with on-board bodies and vans. Before 1980, cars passed acceptance tests at 21 NIII, which opened the way for the new BAZ-6950 family. 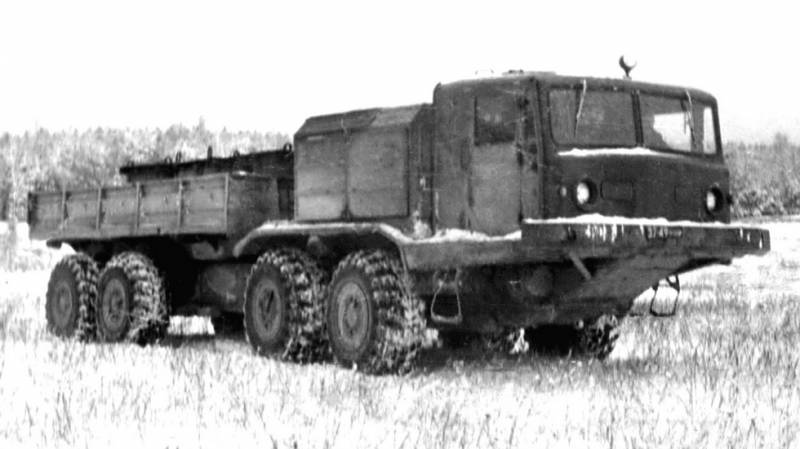 A short история The base 12-ton car-chassis BAZ-6950 began in the late 1970-x. Unlike the BAZ-6944 amphibian unified with it, it was equipped with a powerful spar frame and a fiberglass cabin carried forward with a back tilt of three front windows. Behind it were 400-strong diesel V8, torque converter with 5-speed gearbox and an open mounting frame or on-board platform. 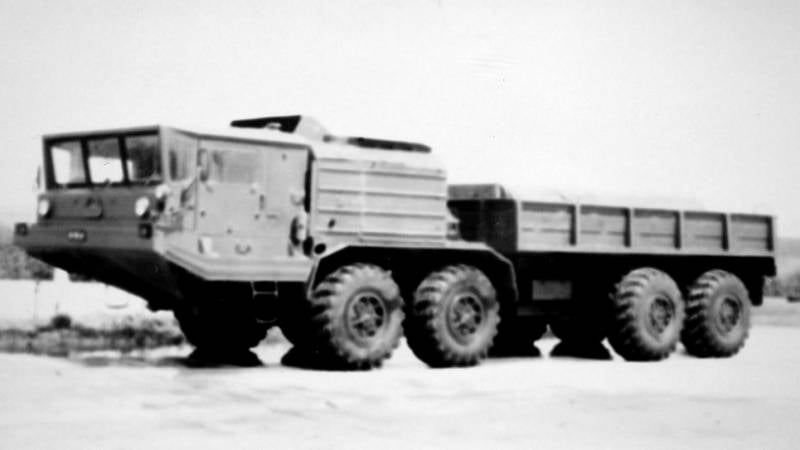 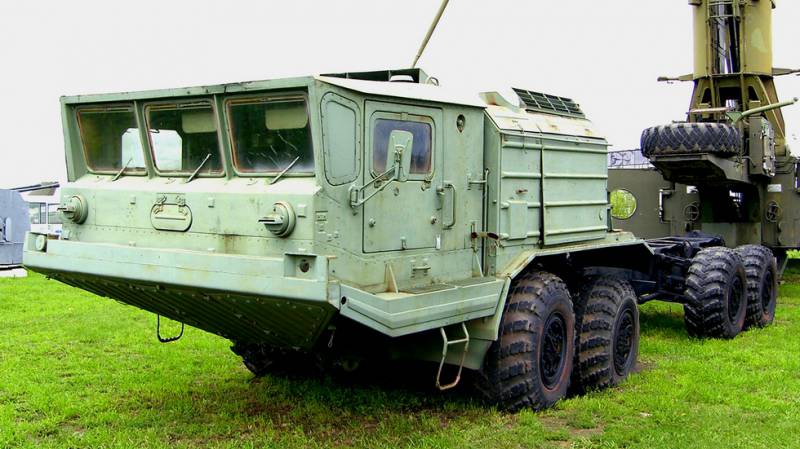 The BAZ-6950 chassis, which was not distinguished by high tactical and technical data and released in single copies, was practically not used in the army. The only military superstructure for him was the SKN-6950 “Rodinka” manned frame metal wagon with wide lateral bevels to accommodate staff complexes. In reality, the only one among them was the Poliana-D4 command post, which was part of the automated control system of the anti-aircraft missile brigade. 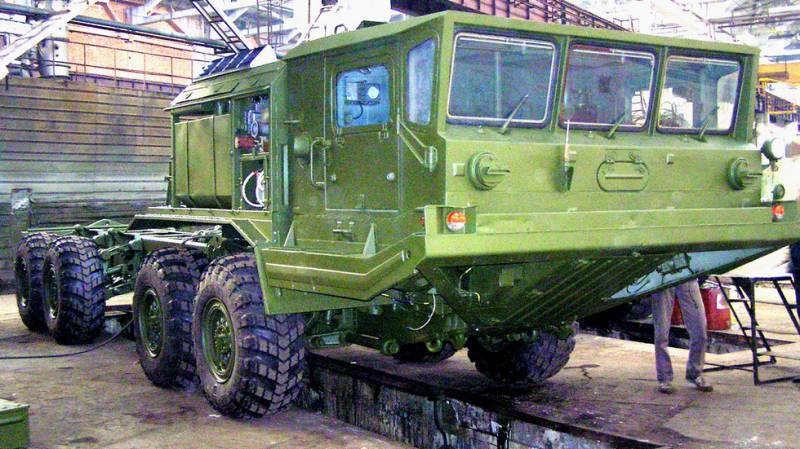 Car BAZ-6950 in the repair shop of the Bryansk Automobile Plant. 2007 year 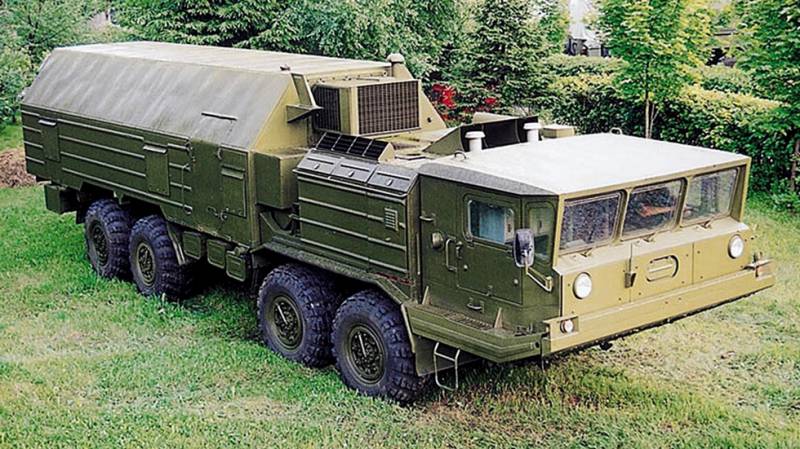 To replace the 6950 model, a 14-ton prototype BAZ-6950M was created, which, after extensive testing and refinement in 1985, appeared in the twin-engine version of the BAZ-69501, on which the military had high hopes. It was a brand new car, on which the former heavy tank the engine was replaced with two lighter and cheaper serial KamAZ-740 diesel engines with 210 hp each, working with two 5-speed gearboxes. The car, which completely satisfied the military, headed the new Osnova-1 family, which bore the code Voshchina.

In fact, everything turned out the opposite: BAZ-60501 just did not have time to establish itself and meet all expectations. For it appeared in the times of restructuring which were murderous for the Soviet military industrial complex, which nullified all the prospects for its use in the Soviet army and reduced the number of superstructures to a minimum. To this scourge was added a strong fire in April 1993 of the year, which destroyed the motor shop of KamAZ. As a result, the range of special equipment on this chassis turned out to be more sketchy sketches and bold projects than the "living" technology. 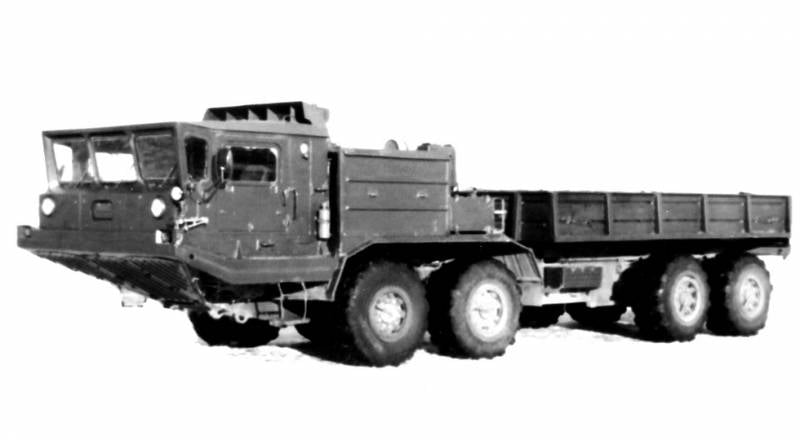 The SKN-6950 box body became the most advanced superstructure for the upgraded command and control center of the Polyana-D4M complex for control of Buk and C-300 anti-aircraft complexes. He could simultaneously display up to 80 air targets and accompany the 272 flying object. The Maneuver command post and the 7В440 combat command and control system of the Air Force were also deployed in such bodies. 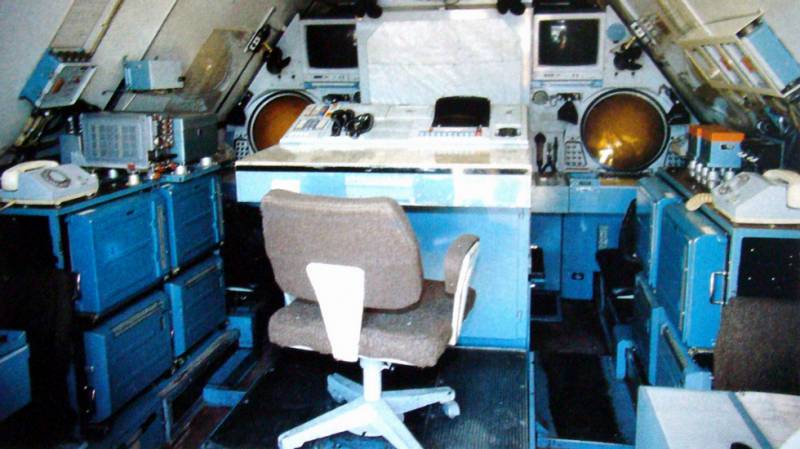 The most important project of the Volgograd plant "Barricades" on the BAZ-69501 chassis was the self-propelled launcher (SPU) 9P76 of the promising operational-tactical missile system (OTRK) "Iskander" with one or two missiles housed in a fully enclosed housing. In 1991, a single prototype SPU with the factory designation Br-1555-1 was assembled, which produced several launches at the Kapustin Yar test site. The development of this system was decided to be transferred to a more advanced BAZ-6954 chassis, which is discussed below. On the basis of BAZ-69501, the Uragan-1 multiple launch rocket system and the Puela-1 reconnaissance aircraft were also designed. 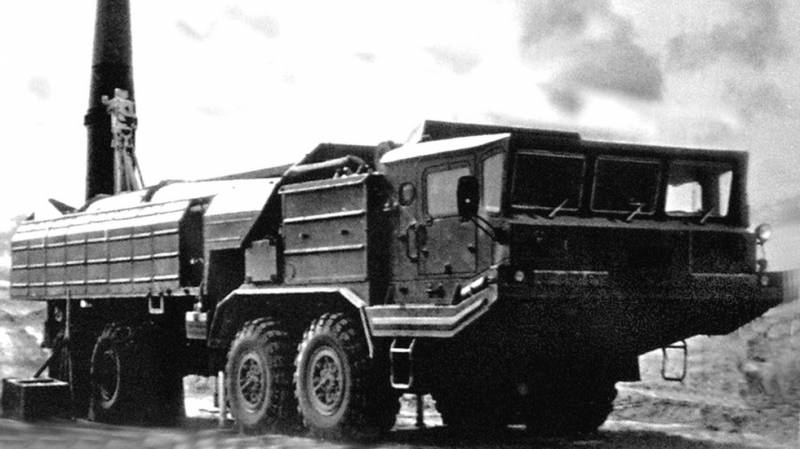 In 1990, the development of the BAZ-69501 was the 13-ton long-base chassis of the BAZ-69502, which became the last new development of the special design bureau, made in the Soviet era. Unlike its predecessor, this machine for the first time received a fundamentally new closed 4-seat frame-metal cabin from the BAZ-6954 model with increased resistance to the damaging factors of a nuclear explosion and two hatches in the roof for landing and disembarking the crew. The chassis was planned to be used as a land variant of the SPA complex "Oka" and the installation of 9П76 for the promising system "Iskander".

The appearance of the new 14-ton special chassis BAZ-69506 with a fiberglass cabin was explained by the hasty search for a replacement for the BAZ-69501 car with two KAMAZ engines, the supplies of which stopped after a devastating fire. Without thinking twice, the Bryansk designers bravely returned to 30 years ago and mounted the Yaroslavl diesel in the 300 hp on it, which first appeared on the first-born BAZ-135MB. In those hard times, the car managed to pass acceptance tests, but then it was not used. 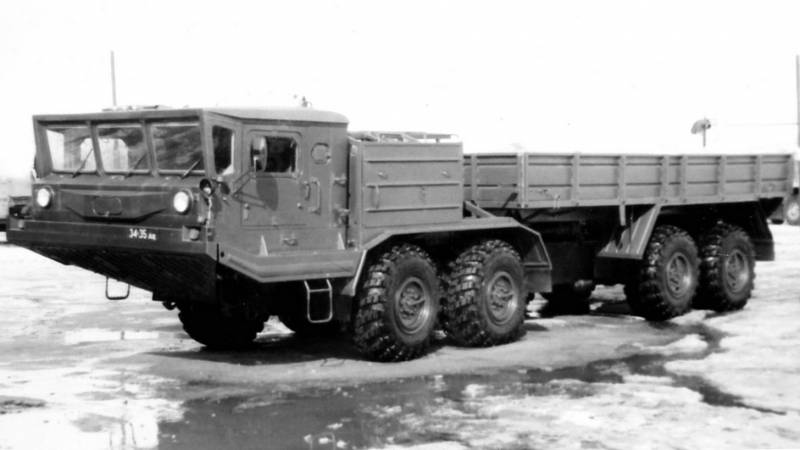 At the end of 1980-x, when military orders rolled down, several dual-purpose vehicles were created on the BAZ-69501 chassis, devoid of military paraphernalia. The most original was the 11-ton national economic truck BAZ-6951P, in which two 260-strong KAMAZ diesel engines were mounted in the central part of the frame under the loading platform between the third and fourth pairs of wheels. This made it possible to balance the load on the bridges, reduce noise in the cab and increase the mounting length of the frame, but during operation the engines overheated. 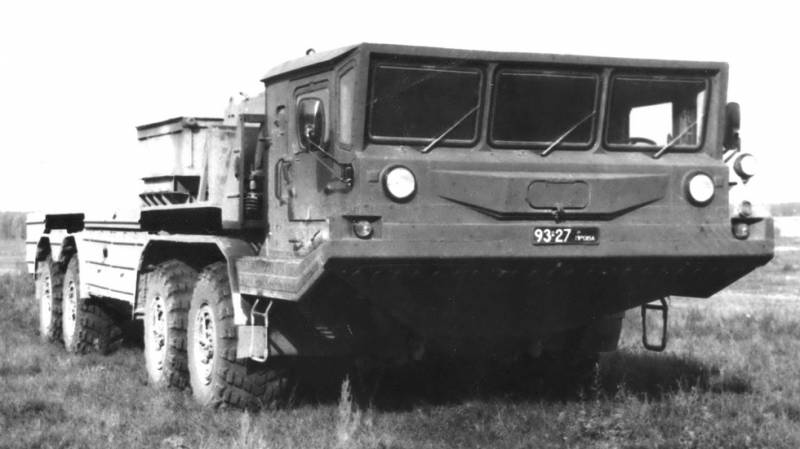 BAZ-6951P chassis with two engines under the cargo platform (from the archive of N. Shcherbakov)

Experienced twin-engine car BAZ-6951P (from the archive of N. Shcherbakov)

The 12-ton multipurpose vehicle BAZ-69501P used the traditional layout with two Kama engines. Of the other vehicles, the BAZ-69505 chassis equipped with an ATZ-5609 tanker with a tank capacity of thousands of liters 17 could be used for military purposes. 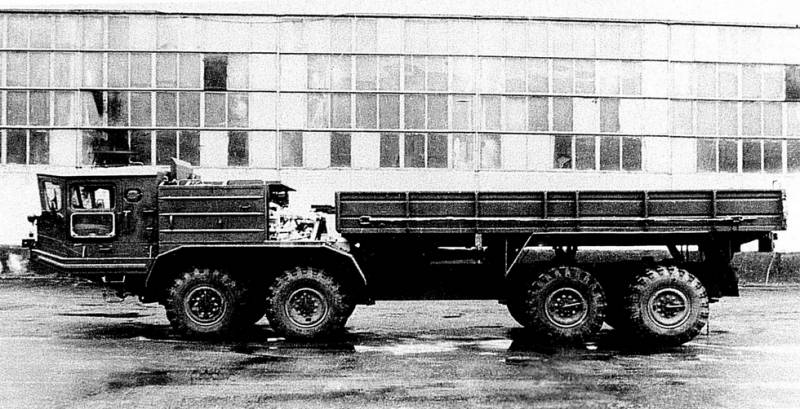 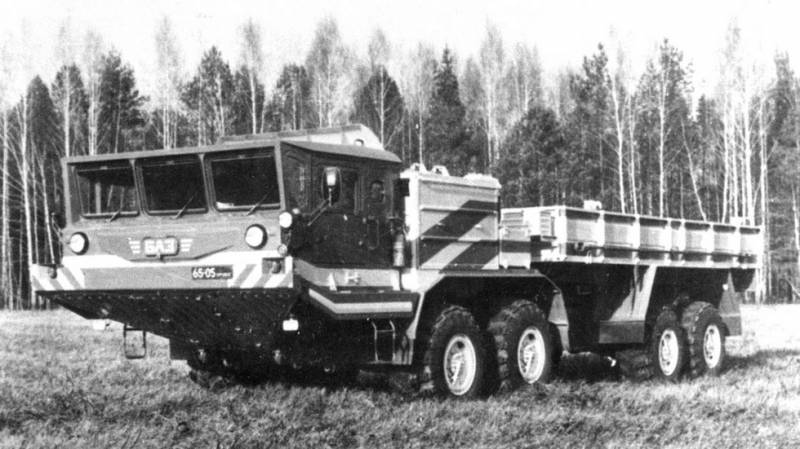 Tests of BAZ-60501P with two 210-strong engines (from the archive of N. Shcherbakov) 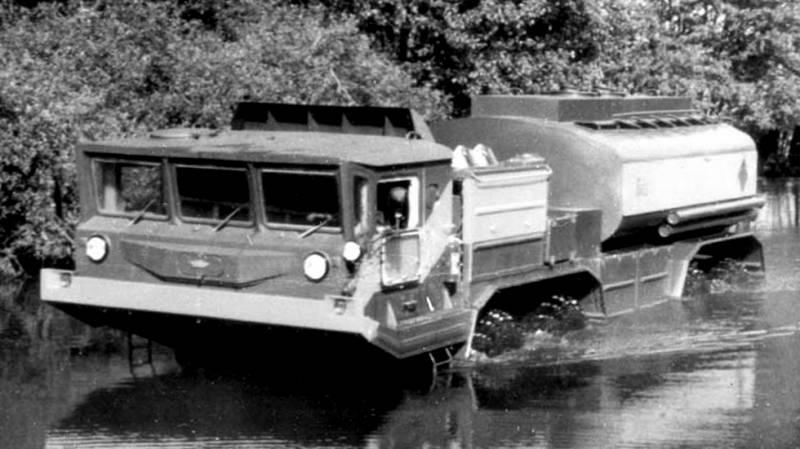 The special Bryansk chassis included several four-axle vehicles, which were the most original search designs designed for the prospect of their further implementation in new generations of vehicles for carrying rocket systems.

The first range, created under the leadership of Chief Designer Yuri Ivanovich Mosin, was composed of 14-ton chassis with two 210-powerful KAMAZ-740 engines for the new Oka-U missile system with increased accuracy. Their prototypes BAZ-6944М and BAZ-6944М20 for the launcher and charging machine, respectively, were assembled and tested in 1986-m. A year after the modifications, they were renamed BAZ-6948 and BAZ-69481.

On the way to deep unification, they embodied the unique idea of ​​Soviet engineers, which was considered a new mainstream for creating multi-axle vehicles and without foreign analogues. It consisted in the use of the BAZ-6944 amphibious-carrying amphibious body for land vehicles, but without sealing, water jets and other components from floating machines. 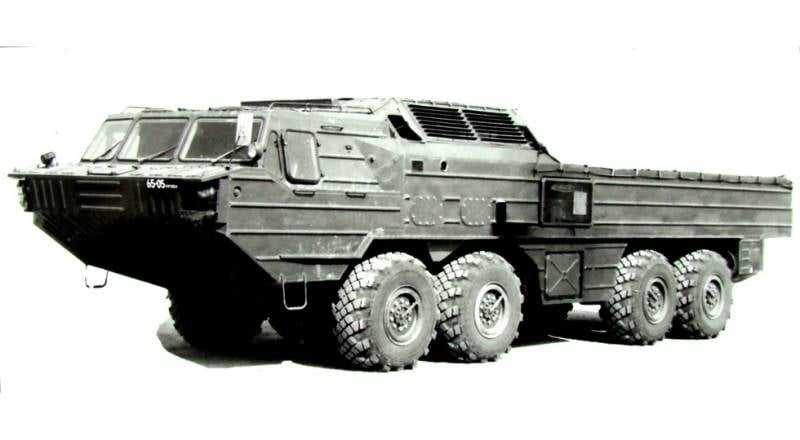 In 1987, a BAZ-69481 chassis was used to assemble a spacious case for the Oka-U model missile launcher. The open stern compartment of the BAZ-6948 was used to transport two missiles. Meanwhile, the refusal to release the Oka missile systems during the period of disarmament and exacerbation of friendship with the West made it necessary to curtail the revision of these systems. However, two years later, after the completion of state tests, both cars were prudently put into service. Subsequently, the best qualities of the Oka and Oka-U complexes were succeeded in translating them into even more powerful and accurate Iskander missile systems. 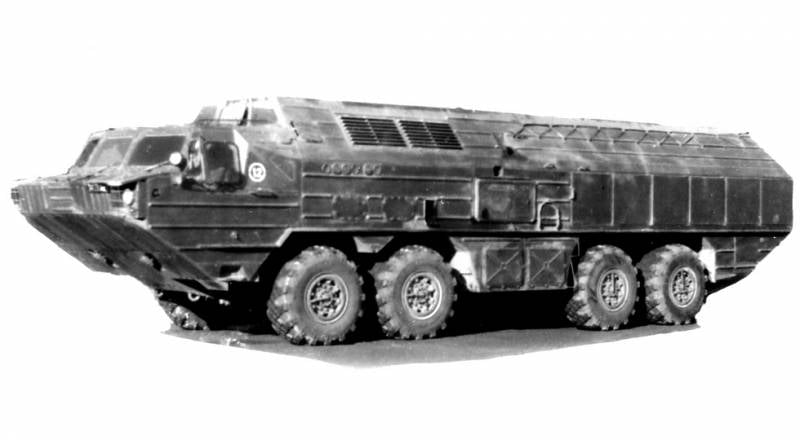 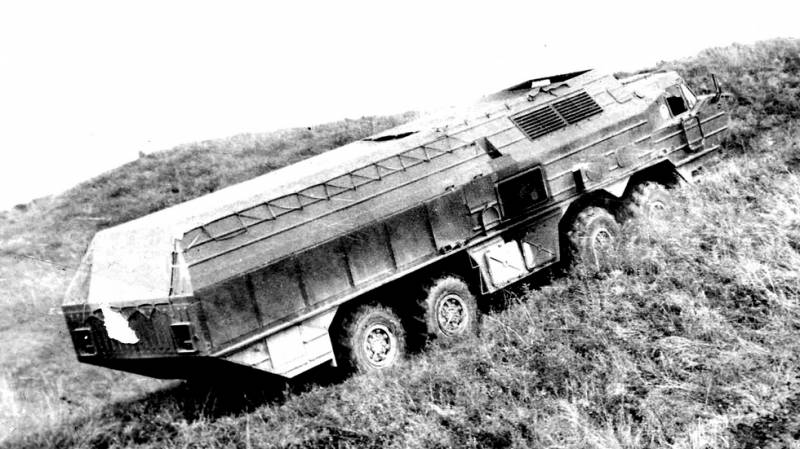 In 1990, the second gamut was made up of a single sample of the BN-17 6954-ton car with 210-strong motors and a steel cabin carried forward. He served for the installation of promising types of weapons and was an exception from all previous developments. Its design under the leadership of Chief Designer Viktor Pavlovich Trusov was made in the framework of the new factory research topic "Facet", but the military still attributed the car to the Voshchina family.

Structurally extended BAZ-6954 was the development of the BAZ-69501 chassis and was unified with the BAZ-69502 machine created at the same time, in which the hatches in the roof of the frame-panel cabin were replaced with ordinary doors. BAZ-6954 met the strength requirements of all factors. weapons mass destruction and was tested for resistance to the shock wave of a nuclear explosion. 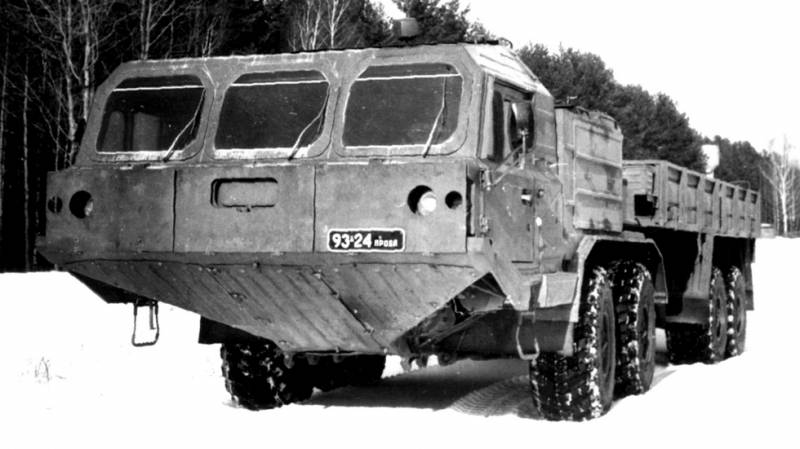 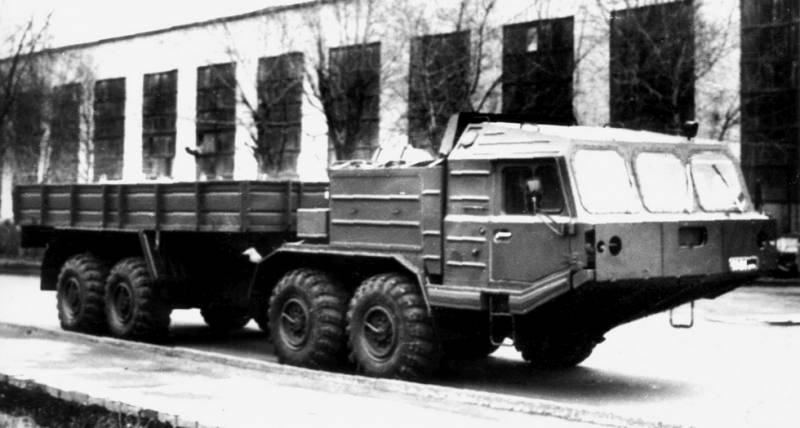 In 1992, the Barrikady plant on the BAZ-6954 chassis assembled a prototype of the SPU 9P76 of the Iskander complex with one rocket and a front-mounted gas-turbine electric generator. A year later, at the Kapustin Yar test site, he made eight test launches, and based on their results, the terms of reference for the well-known Iskander-M missile system was approved.

Another exception to the rule was the first in the USSR special artillery towers, created by converting the BAZ-69501 chassis into ballast vehicles for towing heavy artillery systems and trailers weighing up to 15 t. Thus, lightweight, fast-moving and more maneuverable short-base vehicles of the BAZ-6953 series with forward shifted appeared plastic cab and all-metal cargo platform. They appeared at a crucial period in the late 1980's and early 1990's and entered the armed forces in very small quantities.

The first BAZ-6953 tractor with two 210-strong engines was developed in 1987 year under the leadership of Yuri Mosin under the theme “Basis-1” and belonged to the military family “Voshchina”. The car could work as a part of road trains with a full weight up to 45 t and transport in the body over 10 tons of ammunition and combat crews of towed systems. The maximum speed of a single tractor on the highway reached 75 km / h, laden road trains - 65 km / h. 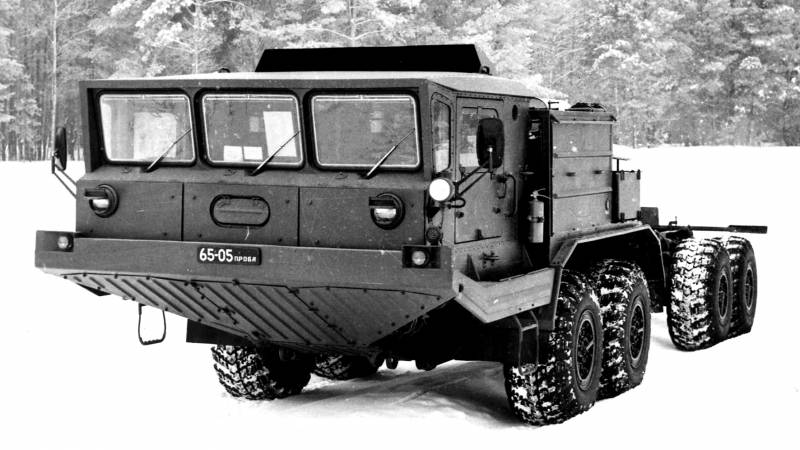 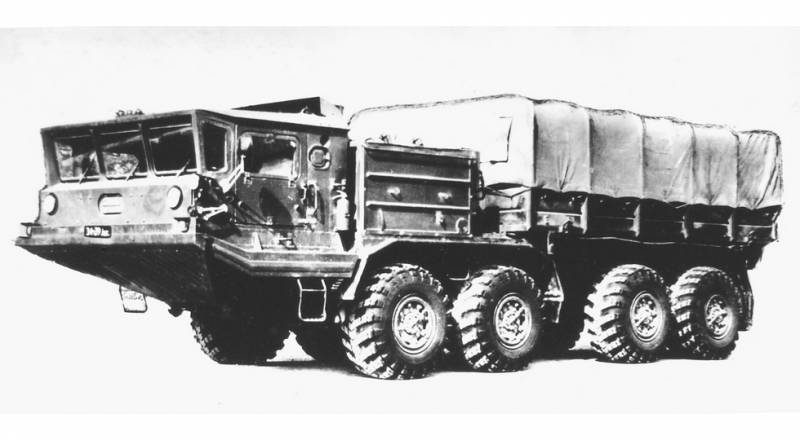 The BAZ-6953 profile assignment was towing heavy artillery systems of the 152 mm caliber — the four-wheel Hyacint-B cannon and the Msta-B single-axle howitzer with combat capability of up to eight people. The car also worked with the standard 11-ton trailer ChMZAP-8335.4 for mounting special bodies. The BAZ-6953 production continued until the summer of the 1993 year, when due to the fire at KAMAZ all the engine stocks were exhausted. 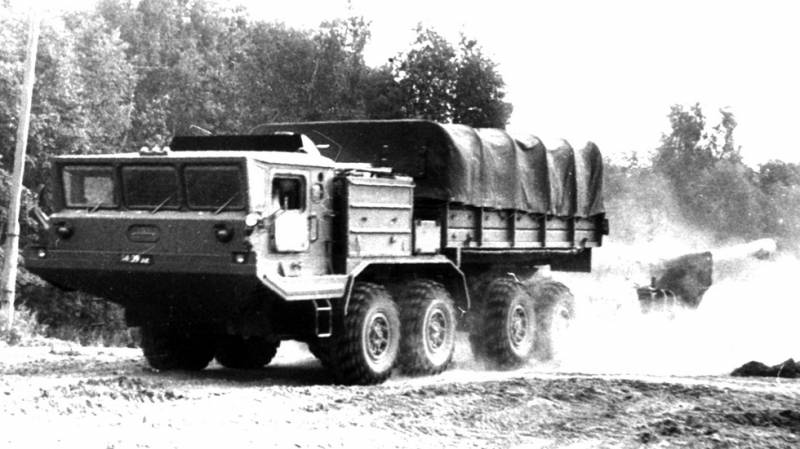 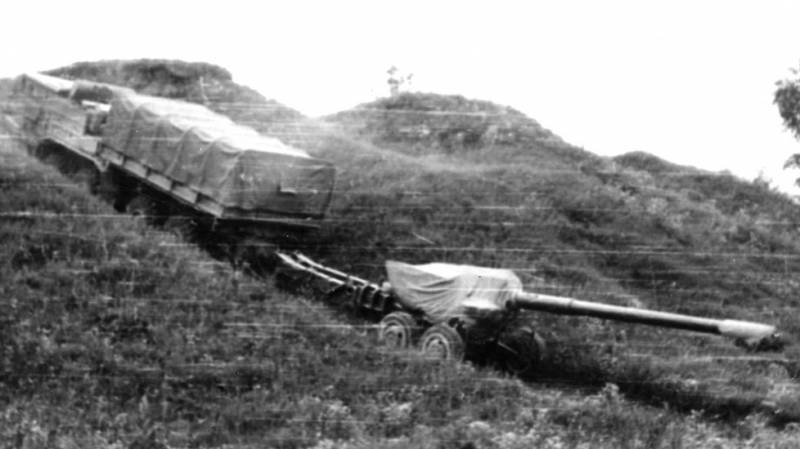 A year later, the car was revived in the shape of a modified BAZ-69531 model designed by Viktor Trusov, created by replacing two previous KAMAZ engines with one 300-strong diesel engine YMZ-238Н. The cab, body and all the other units corresponded to the model BAZ-6953, and the external differences from the previous car consisted mainly in the form of the front cabin trim. 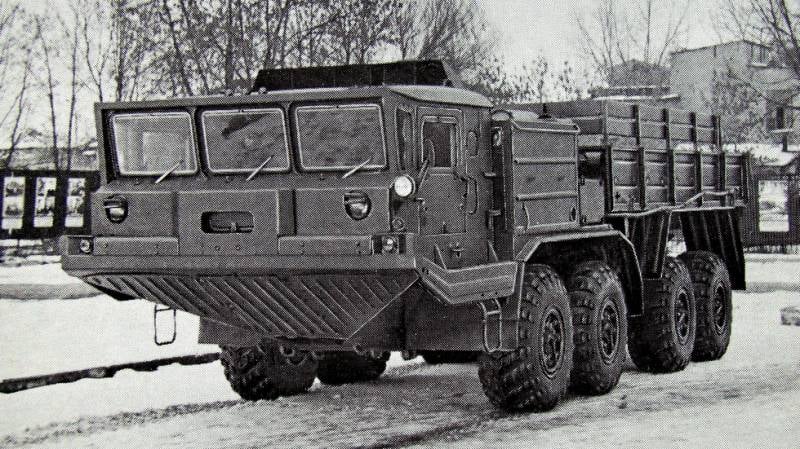 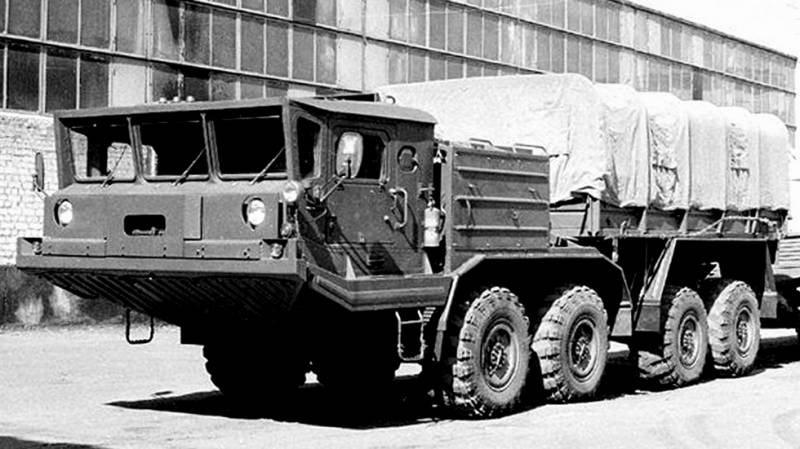 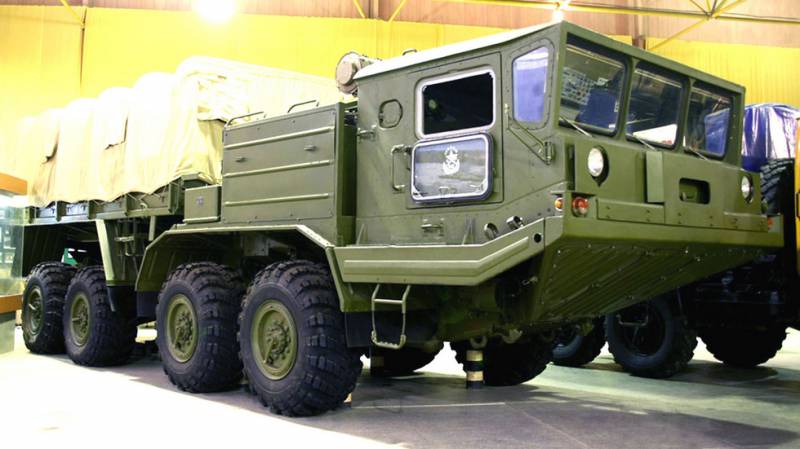 The BAZ-69532 variant with a reinforced cargo platform, capable of operating as a part of road trains with a total weight of up to 70 tons, was among the few versions of artillery towers. At the end of the 1980 for the national economy, an experienced short-base multi-purpose tractor BAZ-6953PT was assembled on the BAZ-69501 chassis. Unlike military vehicles, it did not mount military equipment, awning, partitions and benches in the side metal body.