24 2016 June
33
Today 24 June 2016 marks the 71 anniversary of the legendary Victory Parade on Red Square - the parade, during which the victorious warriors threw the banners of the defeated enemy units and formations onto the platform in front of the Mausoleum. The decision to conduct the parade was taken personally by I.V. Stalin 15 of May 1945. 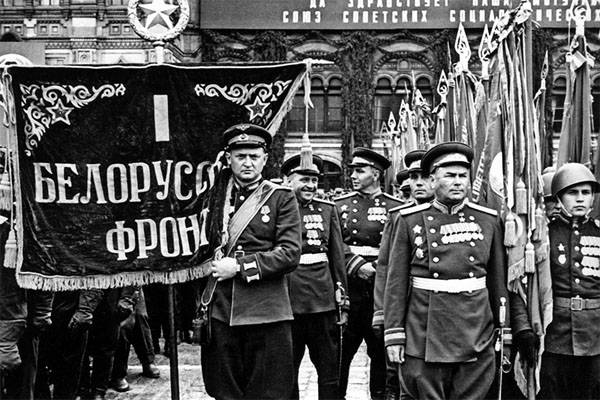 From the memoirs of the outstanding Soviet military commander, General Sergei Shtemenko:
The Supreme Commander ordered us to think over and report to him our thoughts on the parade to commemorate the victory over Nazi Germany, while he said: “We need to prepare and conduct a special parade. Let representatives of all fronts and all types of troops take part in it ... ”.

After receiving the directive in the composition of all fronts, they proceeded to the immediate formation of subdivisions that were to pass through Red Square. From archival sources Ministry of Defense of the Russian Federation It is known that the approach to the selection of candidates was very thorough. First, preference was given to those servicemen who heroically showed themselves in battles, had high military skill. Secondly, anthropometric data of the candidates took place - a strong constitution, height not lower than 176, see. Third, the selection went by age - up to 30 years.

By early June, the formation of consolidated regiments. The staff of each regiment at the time of the parade was up to 1465 people with 10 spare for each unit.

Before the parade, literally every detail was checked and coordinated: from the manufacture of standards for each of the regiments representing the front, to the suit of horses of the parade host and parade commander. The horse of Marshal G.K. Zhukov: a stallion named “Kumir” is a white, light gray color of Terek breed. The horse of Marshal KK Rokossovsky is a stallion named Polyus - a crow, a Krakow suit.

The General Staff ordered to deliver from the parts of the 1 of the Belarusian and 1 of the Ukrainian fronts (at that time were in Berlin and Dresden) almost 900 trophy banners and standards. All these trophies were brought to the Lefortovo barracks. For the soldiers participating in the parade, 200 banners and standards were selected, and it was these 200 trophies of June 24 that fell on a special flooring installed on the pavement of Red Square. 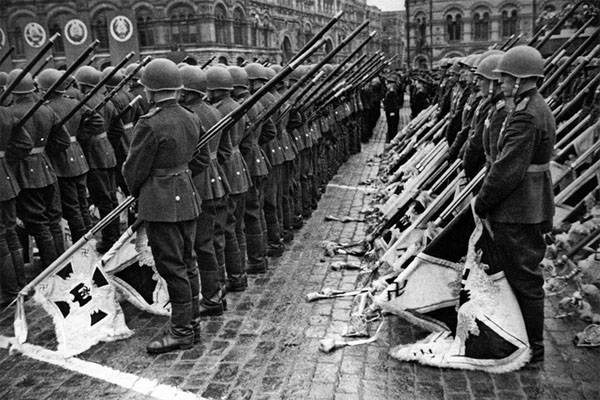 Participants in the legendary parade, themselves turned into real legends, told that the preparation was very intense. The issues of drill training was given the greatest amount of time.

From the memoirs of the holder of the two Orders of Glory S.Shipkina:
We were trained as new recruits, our tunic didn’t dry out of sweat. But we were 20-25 years old, and the great joy of victory easily got the better of fatigue. The classes were good, and we were sincerely grateful to the Dzerzhinsky guys.

Order of the Supreme Commander:
To commemorate the victory over Germany in World War II, I will appoint a parade of troops of the army, naval forces on Red Square on June 24, 1945 in Moscow Fleet and the Moscow garrison - Victory Parade.

The Victory Parade to receive my deputy Marshal of the Soviet Union Zhukov.

To command the Victory Parade Marshal of the Soviet Union Rokossovsky.

I give general guidance on organizing the parade to the commander of the Moscow Military District and the head of the Moscow garrison, Colonel-General Artemyev. ”

Marshal of the Soviet Union I.STALIN

The cadres of that parade today cause not just interest, but also great pride in the generation of winners who broke the back of Nazism.

Ctrl Enter
Noticed oshЫbku Highlight text and press. Ctrl + Enter
We are
Azerbaijan hosted a military paradeVeterans of the Victory Parade: we saw the military power of Russia
Military Reviewin Yandex News
Military Reviewin Google News
33 comments
Information
Dear reader, to leave comments on the publication, you must sign in.