In a referendum in Britain won ... Putin

24 2016 June
214
According to the most recent data, 52 percent of the British voted at the referendum were in favor of secession of the kingdom from the European Union. The turnout was high: 72,1% of voters showed up at the polling stations. The career of Prime Minister Cameron, who spoke in favor of preserving EU membership, can be considered complete. Experts believe that luck has turned away from the politician. But his opponents, including the former Mayor of London B. Johnson, triumph. 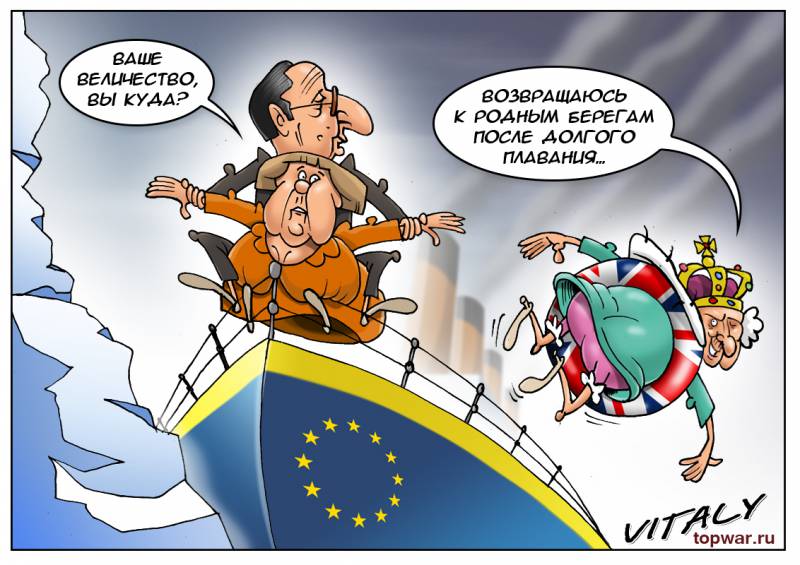 Experts predicted in the event of the kingdom leaving the European Union a “collapse” of the pound sterling, difficult and long negotiations with Brussels, Britain’s problems in international business and even a decline in world oil prices. One of the manifestations of the probable victory of supporters of secession from the EU in Britain was the mass buying up of gold by the British, and at the same time safes: people are afraid of a strong drop in the pound sterling.

Voting results with graphs and regional data can now be viewed on the English-language website "BBC".

TV and Radio Company "BBC" reports that 52 percent of Britons voted for the country's withdrawal from the EU. The data was made public based on 374 votes from 382 constituencies.

The company's website indicates that 16,8 million people voted for leaving the union, and 15,7 million - for maintaining membership in the EU. "BBC" notes that the advantage to the opponents of Brexit "is already mathematically impossible."

It is also indicated that in Northern Ireland and Scotland and most of the districts voted against leaving the EU. So did the voters in London.

As we wrote on "IN"In the United Kingdom, the “Scottish Question” can be exacerbated.

21 Jun. Nicola Sturgen, leader of the Scottish National Party, said that if the UK leaves the European Union, Scotland will hold a second referendum on secession from the United Kingdom.

According to Sturgen, most of the Scots want to save the state within the European Union.

Obviously, the Scots really want to live in the EU, and therefore in the future another referendum could take place - already on the separation of Scotland from the United Kingdom.

Europe’s reaction to historical the event in the UK was truly turbulent.

One of the first responded to the vote is Marine Le Pen, the leader of the French National Front. She wrote in "Twitter" on the victory of freedom: "Victoire de la liberté!" and called for "to hold similar referendums in France and in other EU countries."

"Deutsche Welle" cites a statement by the chairman of the European Parliament, Martin Schulz. In an interview with the German television channel ZDF, he announced that Brussels was ready to leave the UK from the EU.

According to Mr. Schulz, the process of negotiations on withdrawal will begin quickly.

Earlier, analysts assured that the process of negotiations with the EU is a long and tedious business. However, the statement of Schultz shows that they are not going to pull the cat by the tail in Brussels. True, the procedure for leaving the EU has not yet been tested. Well, someone must be first!

Deutsche Welle publishes a statement by German Foreign Minister Frank-Walter Steinmeier. He is disappointed with the results of the British plebiscite: "Newscoming from the UK are truly disappointing. This is a sad day for the UK and Europe. ”

The leader of the British United Kingdom Independence Party (UKIP) Nigel Faraj has just demanded resignation of Prime Minister David Cameron. He believes that the best candidate for this post is now the former mayor of London, Boris Johnson (recall, one of the most ardent supporters of the exit of Britain from the EU). 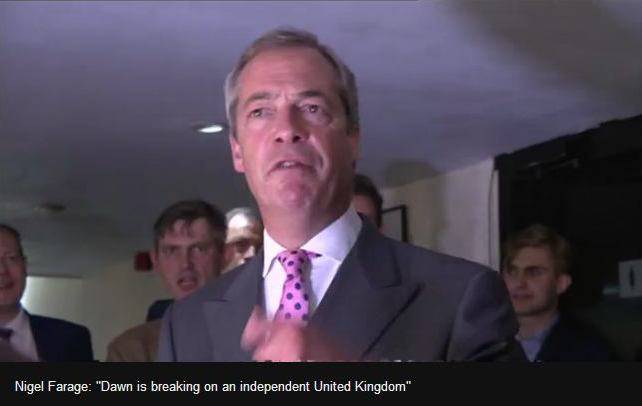 As for the forecasts for the probable depreciation of the pound sterling, then analysts have hit the mark.

The exchange rate of the British currency against the US dollar against the background of a vote fell by 11,1%, which is the lowest figure in the last thirty years.

On the eve of the results of the referendum, we note that the price of oil has also decreased. Today, the decline in prices continued. Variety Brent fell in price with 51 already to 48,3 dollars per barrel.

Recall the recent statement by the British Prime Minister David Cameron. A month ago he говорилthat a British exit from the European Union could bring happiness to Vladimir Putin.

There is no news about happy Putin yet. On the contrary, against the background of a rapid fall in oil prices, the president of an oil-producing country can hardly be happy.

In addition, earlier during the SPIEF, the head of the Ministry of Economic Development of the Russian Federation, Alexei Ulyukayev, warned about the negative impact of a possible British exit from the EU. This increases instability in the oil market, he noted, and for Russia "this would mean greater volatility and additional problems."

But here are statements from the USA. They are also devoted to Putin.

One of the first to speak was ex-US ambassador to Russia Michael McFaul. According to him, he won on a plebiscite in Britain ... Putin.

Michael McFaul considered the results of the referendum on UK membership in the EU victory of President Vladimir Putin. About this he wrote in his "Twitter".

“Today it is a giant victory for the purposes of Putin’s foreign policy. Pay tribute to him ", - quotes the former diplomat "Lenta.ru".

Mr. McFaul still admits that the victory of supporters of the refusal of British membership in the EU is not the personal merit of the Russian president, but she, no doubt, "serves his long-term goals in Europe."

“Putin complained about the collapse of the USSR and the Warsaw Pact, so he is glad to see a split in European unity,” the ex-ambassador added.

Thus, it is possible to predict the coming retirement for Prime Minister Cameron. Previously, he claimed that he would retain his post “in any case,” but Western experts and local politicians strongly doubt this. Former London Mayor Boris Johnson may well sit on his chair.

You can also assume some instability in oil prices (however, experts do not believe in a long fluctuation) and the depreciation of the pound sterling. Against the background of London’s future talks with Brussels, some political instability is expected: it is not for nothing that Marine Le Pen makes bold statements, reminding of the dissatisfaction of many right-wing parties in Europe with the “dictate” of Brussels.

Another question is interesting, which analysts often bypass, or forget about it. The fact is that the results of the referendum held are not legally binding. The UK government is not obliged to obey the results of the vote. But the thing is that the referendum was initiated by none other than Mr. Cameron himself. And his political career is now really close to dusk. This “loser”, as opponents call it in Britain, is unlikely to be able to refuse to recognize the voting results.