Nuland flies from Kiev to Moscow to discuss Minsk

24 2016 June
61
US Assistant Secretary of State Victoria Nuland, after visiting Kiev, visited Moscow. In Kiev, as stated in the US State Department press service, Nuland discussed the implementation (or non-fulfillment?) Of the Minsk agreements. According to the official representative of the US embassy in Russia, Will Stevens, the assistant secretary of state intends to discuss the same issue in the Russian capital. 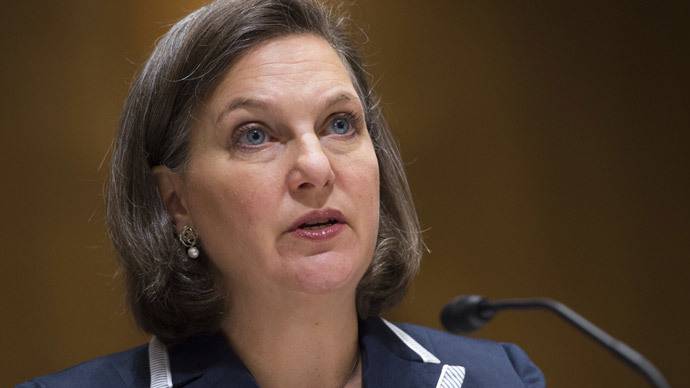 Earlier, the United States Ambassador to Russia John Tefft said that the representative of the US foreign ministry will arrive in Moscow to "give impetus to the implementation of the agreements reached in Minsk." Reports about it RIA News.

Against this background, a significant increase in the number of publications in the Western press is drawing attention to the fact that it is not beneficial for the United States and Ukraine for the Minsk agreements to be implemented. Indeed, ultimately, the implementation of the Minsk agreements will lead to a stabilization of the situation near the borders of the Russian Federation, and this is clearly not part of Washington’s plans. It is noteworthy that such thoughts are expressed not only by journalists, but also by politicians in the West - in particular, French and Italian parliamentarians.

And how Ukraine is “ready to perform Minsk-2” was recently announced by the representative of the Ministry of Internal Affairs “Square” Zoryan Shkiryak, who announced a new shipment of punitive battalions (regiments) of the Azov and Donbass to the Donbass to “destroy the Russian orcs” (this direct quote).