How "Stratfor" and Khodorkovsky predict an "fast revolution in Russia"

24 2016 June
168
Not so long ago, an article was published on the pages of “Military Review” about how Western “partners” are perplexed about the straightening demographic situation in Russia against the background of quite serious economic difficulties. The western author could not hold back his emotions, saying: how is it that the Russian GDP is falling, while the high birth rates and relatively low death rates continue to remain at record levels over the last quarter of a century. The bewilderment was also due to the fact that not so long ago the Stratfor structure, called the CIA alternative, in the United States published forecasts of a reduction in Russia's population to 125-130 million people by 2020 from high mortality and mass emigration. 2020 year, as they say, is not far off, and the dynamics of changes in the size of the population of Russia does not hurry to please the Western "experts" ...

By the way, even more “authoritative experts” predicted a demographic failure of Russia of such a nature that by the year of 2030 Russia would become one of the countries with a population of less than 100 million people.

Now, in Stratfor, for some reason, it is not customary to recall projections about the “Russian demographic collapse,” but it’s customary to publish new horror stories - regarding Russia, naturally. Analytical service, crossing already with a hedgehog — the Sberbank’s reporting data, statements by some unnamed human rights activists and the Levada Center polls — publishes a new forecast of what “Russia will suffer” in the near future. The new forecast is this: it turns out that Russia "cannot escape from the revolution." “Stratfor” comes to such an unambiguous conclusion for itself, noting the decrease in the level of real incomes of the population. That is, the message is approximately the following: the level of material support in Russia has gone down - it means “everything is on the streets, on rallies, protests and strikes” ...

It is clear that this is the “blue” dream of the “friends” of Russia - once again try to turn the anti-constitutional coup or at least add a degree of internal Russian distrust of each other. And because such forecasts, which are more similar not to forecasts, but to open wishes from the West, have long not caused surprise. Moreover, the name of the person himself, whose statements as “statements of an unnamed expert” are trying to promote in Stratfor, is quite well known to himself. This is about Mikhail Borisovich Khodorkovsky, who, after the arrival of the people in politics, announced to everyone that "a revolution is coming in Russia."

As indirect evidence that the “alternative CIA” is based on Khodorkovsky’s statements (well, or vice versa ... in principle, in this situation it is not so important), it is worth mentioning one important fact.

This statement of experts "Stratfor":
The reason for the surge in protest activity will be fraud in the (September) parliamentary elections.

And these are Khodorkovsky's ideas, published on his personal site:
It is necessary to return the country to the democratic path, for this it is necessary to hold fair elections. Fair elections are impossible without major changes. During the two-year transition period, you must:
- to ensure the separation of powers through amending the Constitution;
- to carry out judicial reform and update the law enforcement system;
- ensure the independence of the media;
- to transfer the maximum power from the center to the regions;
- to carry out demonopolization of the economy.

According to Khodorkovsky, in the revolution, it turns out, there is nothing terrible, and the Russian people "have the opportunity" to realize this. In the Ukrainian example, no? .. 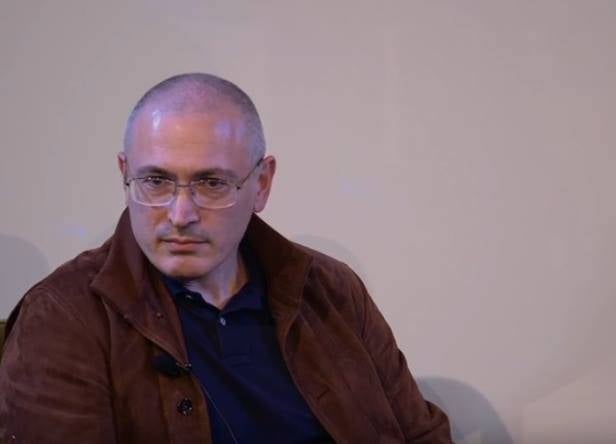 Three months before the election, “Stratfor” already has “falsifications recognized”. Khodorkovsky’s a priori claim that the elections will be “dishonest”, and they “must be fair.” It is on this logic in the style of blatant violation of cause-effect relationships, if not to say - frank verbal "heresy", the so-called non-systemic opposition and Western structures affiliated with it and build their work. It is said - “the elections will be rigged”, which means that everyone should believe this. And the fact that this is said by a person whose forces do not need fair elections in Russia by definition, because they do not shine anything at such elections, in the camp of “friends” few people care.

The overlapping notes of Mr. Khodorkovsky with “Stratfor” sentimental sketches manifest themselves in the background of a scandal with a petition published on the White House website, the author of which calls for investigating the financing of individual senators and at that time presidential candidate Barack Obama from two offshore companies with probable the involvement of the ex-head of Yukos. The scandal is that the petition, which in a short time gained 88 thousands of votes (there were 12 thousands left before official consideration) was suddenly “blown away”. People who wanted to leave their voices under the petition suddenly found out that the number of votes decreased many times - to 6 thousands ... Where did the "lost" 82 thousands of votes disappear - silence with a certain hint of a "failure of the counting system". Why, in this case, the system “got off” when the votes were counted, only one petition, and a petition in which Barack Obama is mentioned in a negative light - a big question ... Democracy in an American way, apparently, decided to show itself in all its glory. No, you understand, falsifications, no dishonest vote ... Well this is only in Russia, they say, this is possible. And in the USA everything is “transparently” utterly ...

By the way, why does “Stratfor”, concerned with the questions of the “speedy revolution in Russia”, say nothing about the speedy revolution in the USA? What is not a revolutionary situation for the States: an ISIS bugger from XIL shot 50 buggers from ISIS against the background of the American debt that passed for 19 trillions of dollars of American debt and amid reports that the election campaign of the current US President was financed from the funds of the Russian oligarch who was in the field at that time imprisonment for fraudulent schemes of astronomical proportions ...

Ctrl Enter
Noticed oshЫbku Highlight text and press. Ctrl + Enter
We are
Again about fertility. The most important factors of the demographic situation in modern RussiaLow birth rate is one of the key problems of the national security of modern Russia
Military Reviewin Yandex News
Military Reviewin Google News
168 comments
Ad