24 2016 June
20
Pakistan, which unexpectedly for many in the twentieth century, broke into the club of nuclear powers, produces a sufficient number of different weapons. And let the Pakistani manufacturers produce not the best samples in the world, but their own, and quite cheap. This is confirmed by one of the latest developments of the local company Daudsons Armoury, which introduced the DSA Trushot self-loading pistol for the popular cartridge caliber 9x19 mm.


This may seem strange, but Pakistan today is one of the most liberal countries in the world in terms of arms legislation. Moreover, in the province of Khyber Pakhtunkhwa, it is not forbidden for residents to own in private property not only small arms, but even heavy weapons, which include grenade launchers and mortars. The reason for such unprecedented freedoms are local cultures and traditions. For example, for Pashtuns, being the owners of the AK-47 is a sign of special respect and honor. At the same time, the cult of weapons plays a very large role in practically all the nationalities inhabiting this country; it is in Balochi, Sindh and Punjabi. Many weddings or major celebrations in this country can not do without shooting in the air. According to Michael Palin, a well-known British geographer and writer, weapons for the people of Pakistan are a social necessity. The people of Pakistan carry weapons just like the people of London wear umbrellas.

Buy firearms in Pakistan is not difficult. In a number of regions of this state, primarily in the northwestern province of Khyber Pakhtunkhwa, there are also real factories for the production of handicraft weapons. Local craftsmen learned to copy rifles back in the years of British colonial domination, and the local arms business flourished in real life during the years of the Soviet military presence in neighboring Afghanistan. It was then that a huge arms market formed here. To this day, entire areas in the Tribal Zone live in the small arms trade. In many local gun shops, which work both legally and underground, under the guise of corrupt local authorities, you can buy a variety of weapons - from the saber of the Mughal times to samples of weapons of World War II and modern assault rifles. 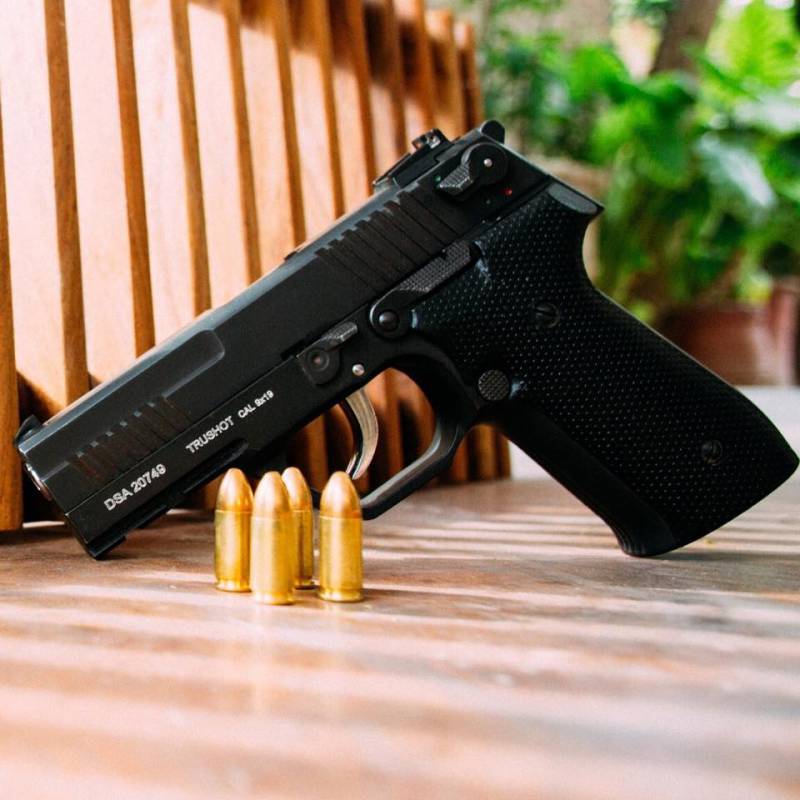 Of course, the Pakistani small arms market is not only represented by handicrafts and smuggling that goes into the country from Afghanistan. The Pakistani military industry is well developed. One of the largest companies in the country that specializes in the production of small arms is Daudsons Armory. The production facilities of this company are located in the city of Peshawar, Khyber Pakhtunkhwa province, which is traditionally the center of Pakistan's weapons production. The company was founded back in 1954 and is currently one of the contractors of the Pakistani Ministry of Defense, producing a fairly wide range of products. The company specializes in the production of small arms and artillery weapons. Today, DSA enterprises produce 120-mm and 80-mm mortars, 40-mm hand-held and automatic grenade launchers, single-barreled and double-barreled 12-gauge pump-action shotguns, various rifles and pistols. They are also engaged in the release of ammunition: from various mines and grenades to RPG-7 grenade launchers to aviation bombs of various calibers. It also produces a large number of cartridges for small arms, shells and shells, as well as gunpowder.

The company Daudsons Armory also has a developed sector for the production of civilian weapons, including non-lethal. Here they collect small-caliber self-loading carbines, single-barreled and double-barreled smooth-bore pump guns. Noteworthy is the fact that, unlike military products, which often represent copies of Soviet, Chinese, American or German equipment, weapons models intended for the civilian market are the own developments of this Pakistani company.

These developments include the 9-mm self-loading pistol DSA Trushot, which is the first model of a short-barreled weapon, which was independently designed by the designers of Daudsons Armoury. The gun focuses mainly on the local arms market, but given the fact that Islamabad is a large exporter of weapons, supplying it to more than 40 countries of the world, we should not exclude the option that the DSA Trushot pistol will be shipped abroad to third world countries . There is also no doubt that the new pistol, developed in Pakistan, will be the subject of keen interest among collectors of exotic weapons from around the world. Especially, taking into account the fact that Daudsons Armoury has already presented this gun, made in the traditional oriental version as well (the gun was lavishly decorated with engraving). For lovers of unique firearms, this performance of the gun may seem very tempting. 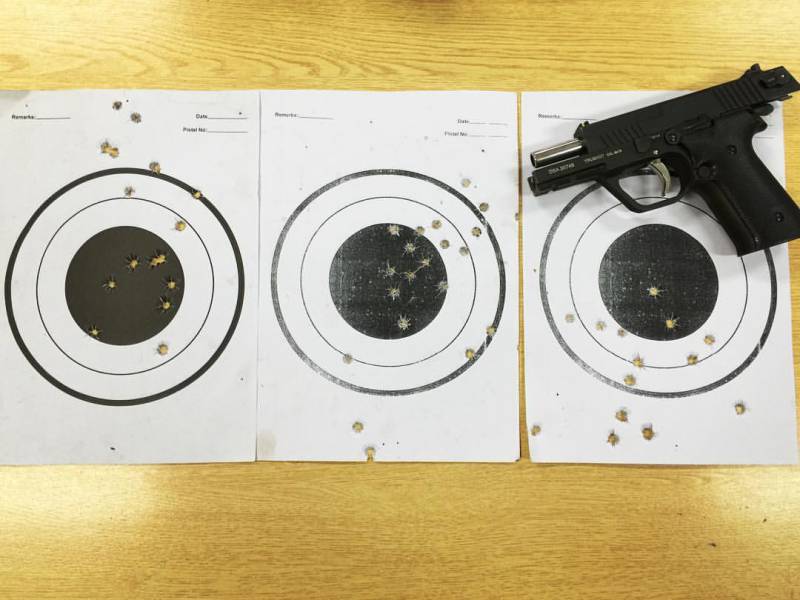 Externally, the Pakistani pistol is somewhat similar to the quite popular SIG Sauer 226, but with numerous technological and design simplifications. In this case, DSA Trushot has a good balance and gives the impression of a fairly durable weapon. For the automatic operation of the pistol, the Pakistani designers chose a short barrel stroke traditional for the pistols of this caliber with locking due to its skewing. The total length of the 9-mm self-loading pistol is 189 mm, and the weight of the weapon without ammunition is 900 grams.

The barrel of the gun has a length of 105,6 mm, inside it is chrome-plated and has 6 rifling with a pitch 254 mm. As the material for the barrel was selected high-quality chromomolybdenum steel 4140. Such steel has high elasticity, heat resistance and fatigue strength, therefore, it is widely used in the automotive, aerospace, oil and gas, and defense industries, where this steel is used to produce spindles, shafts, torsions, and other highly loaded parts. In the arms business, such steel is common as steel for the production of barrels and as material for the blades of knives. The tray for filing was made large, it provides reliable filing of cartridges with all types of used bullets.

The frame of the gun is made of aviation aluminum alloy and, like the pistol barrel, was protected by the brand DSA ScratchlessTM special scratch-resistant coating. The casing and other external parts of the 9-mm pistol have a traditional black matte oxidized coating. There is no strong swinging of the shutter-casing, it was fitted very well with small tolerances. The cheeks were made of black polymer and provided with dotted ribs. On the pistol used trigger mechanism with an external trigger double / single action. There is also a slide lag. On the casing-gate was located double-sided fuse flag type. In the on position, the fuse separates the trigger and the trigger between them, also blocking the firing pin. The two-row magazine for this gun holds 14 cartridges, and its button-shaped latch is located at the base of the trigger guard. The trigger guard does not have the usual stop with a notch for the second hand, the value of which, in fairness, is sometimes disputed. 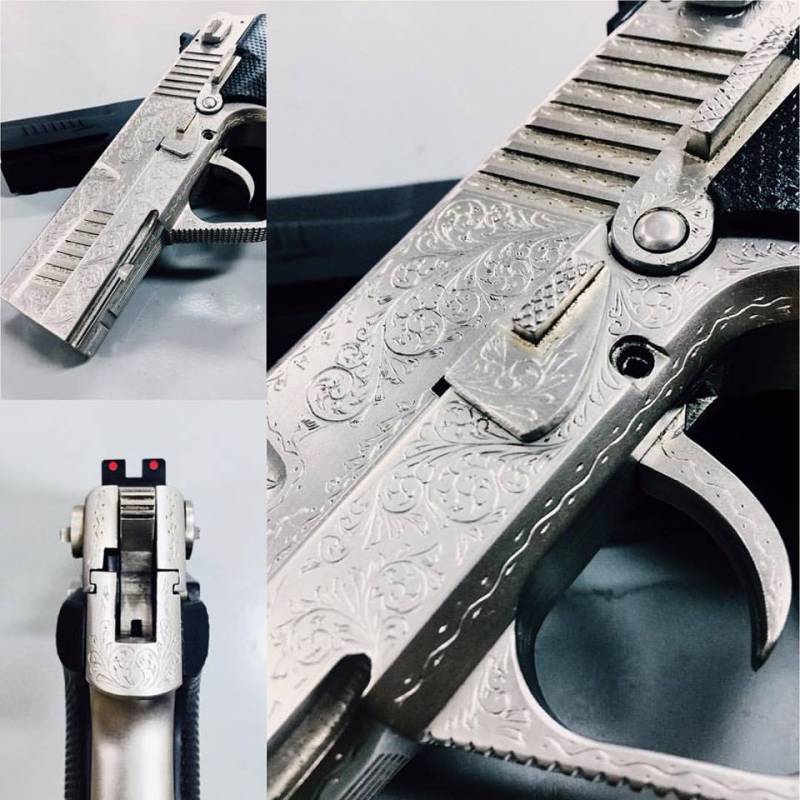 The DSA Trushot 9-mm pistol was equipped with a three-point sight, with a green dot on an unregulated front sight and two red dots on a laterally adjustable rear sight. Under the barrel of the gun is a standard tire for installing various tactical accessories. The performance and quality of the finish parts do not cause questions, while remaining fairly good, significantly exceeding the quality of Chinese-made pistols, which are fairly widespread in Pakistan’s arms market. In this case, the weapon manufacturer emphasizes the fact that the gun is made fully in accordance with ISO standards and NATO standards. Consumer DSA Trushot pistol comes in a neat plastic case and complete with two magazines.

Pakistani 9-mm pistol DSA Trushot has surprisingly good accuracy and stability when shooting. At the same time, the launching force on the self-coer and single-action hook operation on this pistol leaves much to be desired, although it significantly exceeds its closest Chinese competitors, which include the CF-98 pistol and similar models, reports the specialized website all4shooters.com.

Pistol DSA Trushot is very reliable and has a high survivability. In particular, the manufacturer says that after making 5 thousands of shots, the drop in the muzzle velocity is slightly more than 2%. People who fired from this pistol also emphasize one of its interesting features: even when firing fast batches, the barrel of the pistol warms up so little that you can safely and fearlessly touch it with your hand. This feature seems to be due to the thickened walls of the trunk itself. 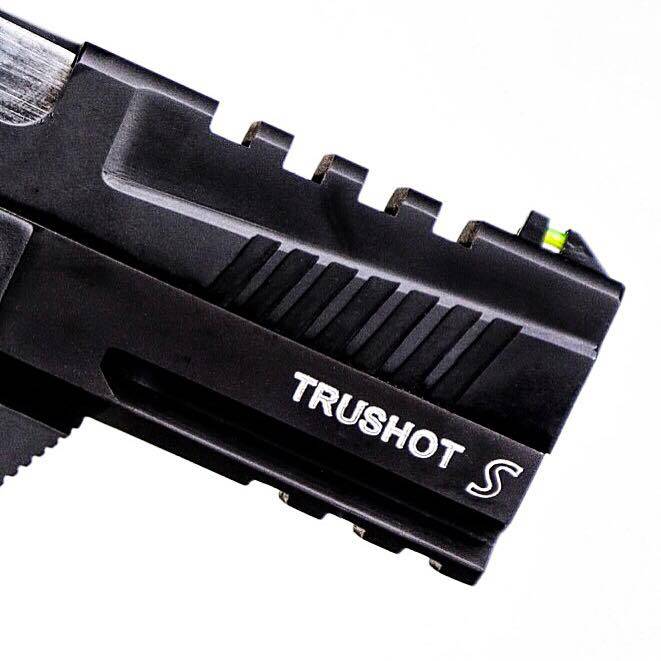 Of course, in terms of its technological and technical level, the Pakistani DSA Trushot pistol cannot confidently compete with modern pistols from leading world manufacturers, but in the lower price segment, especially in terms of price / quality, this gun may well declare itself in the international arena. In the Pakistani market, the price of this 9-mm pistol ranges from 27 to 30 thousand Pakistani rupees, which is roughly equal to 230-250 euros.