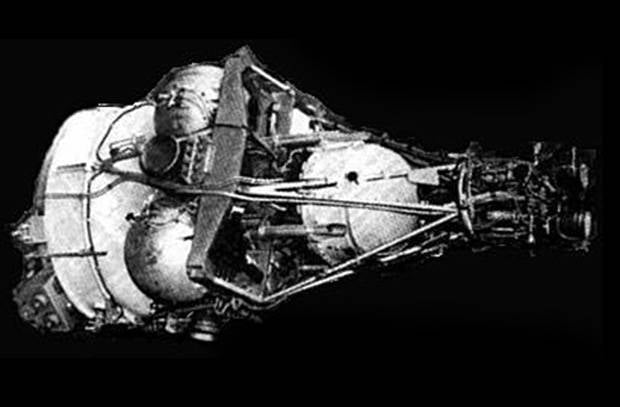 Everyone knows that the Soviet artificial satellite of the Earth was the first. But not everyone knows that we were the first in the creation of anti-satellite weapons. The decision taken on 17 on June 1963 of the year was implemented in practice on November 1 of 1968. On this day, the spacecraft "Flight-1" for the first time in stories intercepted target spacecraft. And five years later, in 1972, the IS-M complex of the anti-space defense system (PKO) was put into trial operation.

The United States was the first in an effort to create anti-satellite weapons. But only after 18 years, September 13 of 1985, the F-15 fighter with the ASM-135 rocket ASAT was able to hit the non-operational American astrophysical target satellite Solwind P78-1.

Already in May, the US 1958 launched a Bold Orion rocket from a B-47 Stratojet bomber to test the possibility of a nuclear weapon hitting a spacecraft. However, this project, like a number of others, up to the 1985 year, was recognized as ineffective.

The Soviet “answer” was the creation of a PKO system, the final element of which was a complex called the IS (satellite fighter). Its main elements are an SC-interceptor with an explosive charge, a launch vehicle and a command center (CP). In total, the complex consisted of 8 radar nodes, 2 launch positions and a certain number of spacecraft interceptors.

The PKO and IP system was developed by the team of the Central Research Institute "Kometa" under the direct supervision of Academician of the Academy of Sciences of the USSR Anatoly Savin and Doctor of Technical Sciences Konstantin Vlasko-Vlasov. Responsible for the entire project was a famous Soviet scientist and general designer of rocket and space technology Vladimir Chelomei.

The first flight of the KA-interceptor "Flight-1" made 1 on November 1963 of the year, and in the summer of the following year a radio engineering complex was created at the command center of the PKO system. In 1965, the creation of a rocket and space complex for launching an interceptor spacecraft into orbit began. At the same time, the spacecraft X-NUMX spacecraft was created. A total of 394 KA interceptors were launched, of which 19 was deemed successful.

In the course of trial operation, the IS complex was upgraded, equipped with a radar homing head (GOS) and in 1979, the Space Rocket Defense Forces put on combat duty. According to Vlasko-Vlasov, the complex designed to intercept space targets at altitudes up to 1000 km could really hit targets at altitudes from 100 to 1350 km.

The basis of the IP complex was a two-turn targeting method. After the interceptor spacecraft was launched into orbit by the launch vehicle, the radio-technical units detecting the satellites OS-1 (Irkutsk) and OS-2 (Balkhash) at the first turn clarified its motion and target parameters and then transmitted them to the interceptor. He performed a maneuver, on the second turn, with the help of the GOS, he detected the target, approached it and hit it with a warhead. The estimated probability of hitting the target 0,9 – 0,95 was confirmed by practical tests.

The last, successful interception took place on 18 on June 1982 of the year, when the Cosmos-1375 target struck the Cosmos-1379 interceptor. In 1993, the IS-MOU complex was decommissioned, in September 1997-th ceased to exist, and all materials were transferred to the archive.

It is clear that the United States reacted to the creation of IP, and they were the first to begin developing anti-satellite weapons at the end of the 1950s. However, the attempts were not so successful. Thus, the program was closed using anti-satellite missiles from a supersonic bomber B-58 Hustler. The program of anti-satellite missiles with a powerful nuclear warhead, which the United States tested in the 1960-s, has not received its development either. High-altitude explosions and in space led to the electromagnetic pulse of a number of its own satellites and formed artificial radiation belts. As a result, the project was abandoned.

The LIM-49 Nike Zeus missile defense complex with nuclear warheads did not give a positive result either. In 1966, the project was closed in favor of the Program 437 ASAT system based on Thor missiles with a nuclear charge in the 1 megaton, which, in turn, was minimized in March of the 1975 year. The development of the US Navy’s project on the use of anti-satellite missiles from decked aircraft was not received. The US Navy's project to launch anti-satellite weapons with a modified UGM-1970 SLBM Poseidon C-73 ended in misery at the end of 3.

And only the above-mentioned project with the ASM-135 ASAT rocket was implemented. But the successful launch in January of 1984 was the only one and the last. Despite the obvious success, the program was closed in 1988.

But it was all yesterday. What about today?

Today, officially, no country has deployed anti-satellite weapons systems. At the start of the 1990-s, by tacit agreement, all tests on these systems were suspended in Russia and in the USA. However, the creation of anti-satellite weapons is not limited to any of the existing treaties. Therefore, it would be foolish to assume that no work is being done on this topic.

After all, it is precisely the space means of intelligence and communications that underlie the modern concepts of warfare. Without satellite navigation systems, the use of the same cruise missiles and other precision weapons is problematic; precise positioning of mobile ground and air objects is impossible. In other words, the withdrawal of the necessary satellites from the system will dramatically adversely affect the capabilities of their owner.

And the conduct of work in this direction, as well as the expansion of the club owning such weapons confirm the facts. Earlier, the head of the space command of the US Air Force, General John Heiten, named Iran, China, North Korea and Russia among the leading such works.

Back in 2005 and 2006, China experienced such a system without actually intercepting satellites. In 2007, the Chinese shot down their Fengyun-1C meteorological satellite with an anti-satellite missile. During these years, the Pentagon reported on the facts of the irradiation of American satellites by ground-based lasers from China.

Lead "antisatellite" work and the United States. Today, they are armed with the ship-based Aegis missile defense system with the RIM-161 Standard Missile 3 (SM-3) missile. It was this 21 rocket of February that 2008 was shot down by an American military satellite USA-193, which did not reach the calculated orbit. According to US media reports, the Pentagon has already created a new generation of anti-satellite systems based on the so-called non-destructive technologies, which force the satellite not to execute workers or send "false" commands.

According to other reports, stealth satellites under the MISTY program were developed and tested in the US 1990s. Their detection in orbit by existing means is almost impossible. The presence of such stealth satellites in orbit is admitted by the Canadian Ted Molzhan, head of the international network of amateur astronomers.

And what about Russia? For obvious reasons, this information is secret. However, in May of this year, a number of foreign and domestic media reported on the successful testing of a rocket in the framework of the Nudol development work. And in December of 2015, Bill Hertz, the author of the American edition of The Washington Free Beacon, reported that Russia had tested an anti-satellite missile. In 2014, the Russian media reported on the testing of a “new long-range missile for air defense systems,” and information that this weapon is being developed in the framework of the ROC “Nudol” was confirmed by the Russia Today news agency in 2014 year.

And the last. Currently, a book of memoirs of the creators of the "satellite fighter" and military service veterans is being prepared for publication. In the preface to it, Lieutenant-General Alexander Golovko, deputy commander of the Russian videoconferencing, said: "... at present, work is under way in our country to create new means of conducting a fight with the spacecraft of a potential enemy." Here, the general director, the general designer of Kometa Corporation OJSC, Doctor of Technical Sciences, Professor Victor Misnik expressed his opinion. According to him, “the means created in the country will be able to hit space targets in necessary quantities.”

As they say, he who has ears will hear. In other words, "we are peaceful people, but our armored train is on the siding."

Ctrl Enter
Noticed oshЫbku Highlight text and press. Ctrl + Enter
We are
Satellite killersSpace systems of the US military communications: analysis of the state and development
Military Reviewin Yandex News
Military Reviewin Google News
16 comments
Information
Dear reader, to leave comments on the publication, you must sign in.