24 2016 June
15
In the foreseeable future, the navy of Russia will be able to get a new type of torpedo. As reported by domestic media, is currently being tested a new torpedo, intended for use by submarines. Soon state tests of the product should be completed, after which it will be put into service. In addition, some technical features of the new project have become known.


Information on the development and testing of a new submarine torpedo was published by TASS news agency. Information about the new project was received from an unnamed source in the military-industrial complex. The source revealed some of the technical details of the project, and also spoke about current work and prospects. In addition, he announced the name of the project. Perspective armament is denoted by the code "Case". The new project "Case" is a further development of the existing torpedo "Physicist", adopted earlier.

The torpedo of the new model is currently undergoing state tests. The sighting station on Issyk-Kul Lake (Kyrgyzstan) became a platform for verification. Already conducted the first test firing using experienced products. In the near future several more similar checks should take place. According to existing plans, state tests of the torpedo "Case" should be completed by the end of the year. Based on the test results, the further fate of the new one will be determined. weapons. So, at the end of the year a torpedo can be put into service. In this case, mass production will begin in 2017. 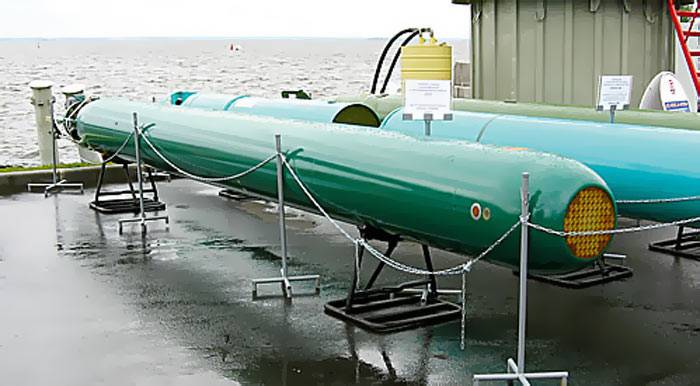 According to TASS, the development of torpedo "Case" was engaged in the Research Institute of Marine Technology (St. Petersburg), and the production of serial products is planned to entrust the plant "Dagdizel" (Kaspiysk). The development of the project was carried out with a wide application of existing developments in previous projects.

Torpedo "Case" is an upgraded version of the existing weapon type UGST "Physicist", which leads to the preservation of some features of the design, at the same time apply some new components and assemblies. Thus, as follows from the available data, the new torpedo should have a caliber of 533 mm and a length of the order of 7-7,2 m. It is also likely that the existing weight parameters, as well as other design features and operating principles, will be preserved.

According to a Tass source, the main driving characteristics of the new torpedo remain at the existing level. It will be able to hit targets at ranges up to 50 kilometers, moving at speeds up to 50 nodes. The maximum depth of fire is defined in 400 m. Thus, it becomes possible to re-equip submarines without noticeable difficulty.

It is argued that the product "Case" retains a thermal power plant, similar to that used in the torpedo "Physicist". It is known that the existing UGST torpedo has an axial piston engine using liquid single-component fuel. The engine is equipped with a rotating combustion chamber and a high-pressure plunger-type fuel pump. To improve the performance of the propeller is placed inside the annular channel. Apparently, the new torpedo "Case" gets a similar power plant, which allows you to keep the characteristics at the level of its predecessor.

The main objective of the new project was the creation and implementation of improved control systems and homing with enhanced characteristics. The overall structure of the control systems is preserved. Like the product "Physicist", the new torpedo "Case" is equipped with a homing system based on sonar equipment. With the help of some improvements of the homing head, the detection range of underwater targets was increased, which makes it possible to markedly increase the effectiveness of the attack. The possibility of remote control from the submarine carrier is also retained. The method of targeting a torpedo is chosen by the crew of the carrier in accordance with the current situation.

By the end of 2016, it is planned to complete state tests of a new type of torpedo, after which it can be put into service with the subsequent order of mass production. Serial products "Case" will be produced by the factory "Dagdiesel". Weapons of a new type will be supplied to various operational and strategic associations of the naval fleetprimarily featuring the latest submarines. It is reported that the start of production of new torpedoes will lead to the cessation of production of “Physicist” products.

According to reports, the submarines of the 955 and 955A Borey projects, as well as the 885 and 885M Ash trees will have to be the first carriers of torpedoes "Case". Currently, the Russian Navy operates three submarines of the 955 project and one “Ash” type. Next year, the fleet submarine forces should be replenished with several new submarines of this type. In the future, the construction and supply of boats will continue. After the start of mass production of new torpedoes, there will be a gradual re-equipment of existing submarines. Subsequent representatives of the projects “Borey” and “Ash”, apparently, will immediately become the carriers of “Cases”. Re-equipment of other types of submarines is also planned.

It is noteworthy that the latest at the moment update of the nomenclature of submarine torpedo weapons occurred not so long ago. In April, 2015, it was reported that a new version of the deep-sea torpedo “Physicist” with a thermal power plant and a firing range of up to 50 km was adopted. As now, it was claimed that these weapons would be received by the newest submarines, and then rearmament of other submarines would begin. With the help of the new torpedo “Physicist”, it was planned to replace outdated USET-80 products, which have been used for several decades. Now, however, a new re-equipment of submarines is planned using another modern development.