SWSU develops exoskeleton for the army

24 2016 June
19
The second international military-technical forum "Army-2016" will be held only in early September, but now the participants of this event are announcing new developments that will become elements of the exhibition. It is noteworthy that, in addition to defense industry enterprises, various other organizations, including higher educational institutions, will take part in the future forum. Thus, the South-West State University (Kursk) will have to show a new version of the exoskeleton, designed for use in the army.


At the end of November last year, Sergei Yemelyanov, Rector of the South-Caucasian University, told the press that in the near future the university and the Ministry of Defense are planning to sign a cooperation agreement. The military department became interested in the developments of university specialists and expressed a desire to oversee new work in this area. In the order of mutually beneficial cooperation, the Ministry of Defense planned to support new projects, including financially.

To create a new version of the exoskeleton, intended for use by the military, it was planned to spend several months. Already in the 2016 year it was supposed to present a prototype of a heavy class system. It was argued that the first version of the heavy exoskeleton for the army, at the request of the customer, will be created in the transport version. The system for use in combat conditions has not yet been developed for several reasons. 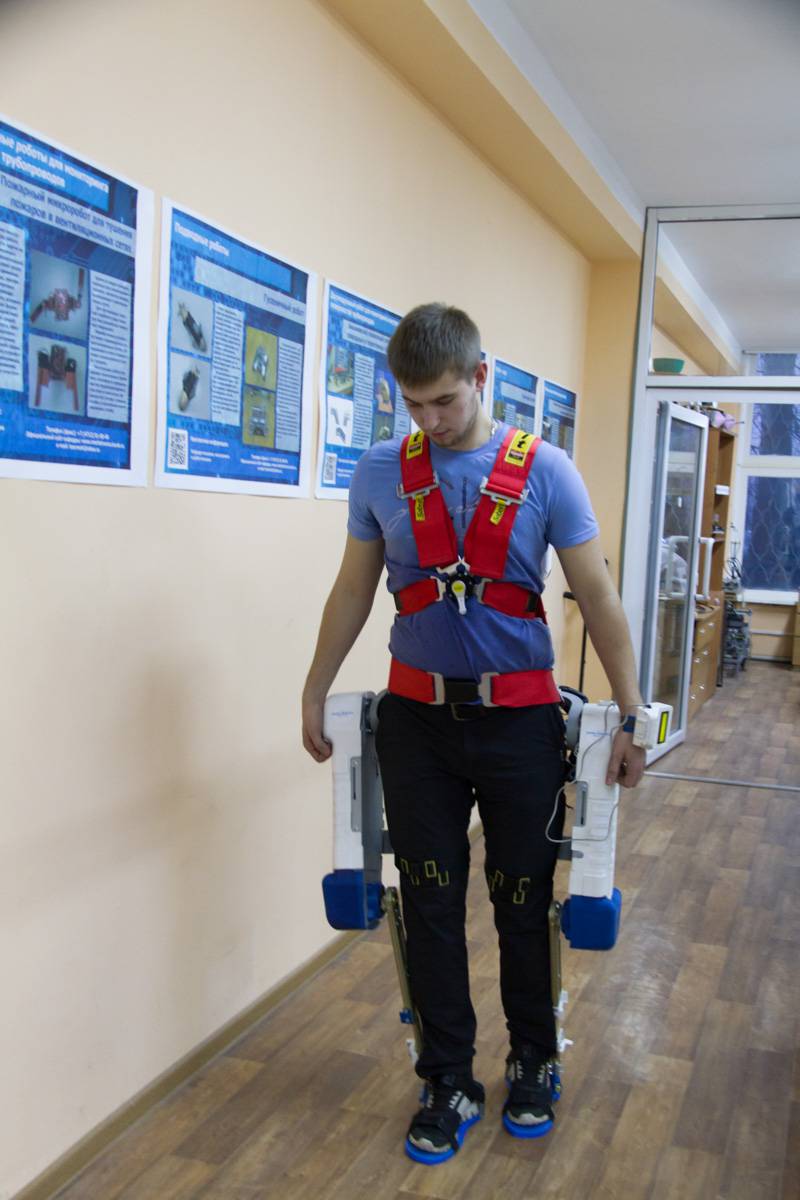 According to reports, SWSU began work in the field of exoskeleton in 2014 year. Obtaining a grant from the Russian Science Foundation allowed the university to organize a separate laboratory for the study and design of new technology. On the basis of the department of mechanics, mechatronics and robotics, a laboratory “Modern methods and robotic systems for improving the human environment” has opened.

One of the main areas of work of the laboratory was the study of the creation of bioengineering mechatronic devices designed to rehabilitate people with disabilities, or to improve the physical qualities of a person. The main way to solve such problems is to create exoskeletons of the required appearance with the required characteristics.

An exoskeleton is a system in the form of a skeleton, a set of drives and control devices that a person can put on himself like other special equipment. Due to the special principles of the control system that controls the drives, the exoskeleton can take on the main load, reducing the physical impact on the person. Such capabilities of the system allow to increase the physical strength of the operator in the implementation of certain operations, or to compensate for the existing problems of the musculoskeletal system, enabling normal movement.

Exoskeletons are considered as promising tools that can be widely used in various fields. First of all, such systems are of interest to the military, since they can significantly increase the capabilities of a soldier on the battlefield and in the rear. At the expense of exoskeletons, you can increase the size of wearable ammunition or use a heavier weapon. In addition, simplified loading and unloading operations. In the medical field, exoskeletons can be used as an effective means of rehabilitation.

With the use of existing developments and new ideas, laboratory staff in just a few months managed to create a number of projects for new rehabilitation equipment. First of all, the experts paid attention to light medical systems. At the same time, the staff of the SWSU laboratory had to carry out a rather extensive work on studying the features of the work of the exoskeleton and its control systems. The solution of such problems allowed to continue work.

Already in the spring of 2015, the first version of the light exoskeleton interacting with the user's lower limbs was presented and tested. The capabilities of this device allow the 30-50% to increase the strength of the human musculoskeletal system. These characteristics allow the exoskeleton to help move the elderly or people with various injuries. In this case, the exoskeleton drives can take over part of the load, unloading the user's muscles.

By the autumn of last year, a whole complex of tools designed to solve various problems was created at SWSGU. As part of this complex, three products of similar design are offered, but with different characteristics and different purposes. New projects were created to solve scientific problems, as well as for possible use in practice. For this three exoskeleton differed instrumentation.

The first product of the family - the so-called. passive exoskeleton ExoMeasure. It is a frame of a complex "anatomical" design with a set of sensors that track the mutual movement of individual parts. Thus, when a person using this exoskeleton moves, the automatics fixes all movements. This technique was proposed for use in scientific purposes, to study the characteristics of the mechanics of the human body.

The second version of the exoskeleton is called ExoLite. This system is a so-called. Thigh exoskeleton designed to duplicate and strengthen the user's legs. This device has received several hinges and drives in different parts, which allows a person to get up, sit down, walk and climb stairs using partial unloading of the musculoskeletal system.

The third exoskeleton, created at the end of last year, was called ExoHeavy. This device is designed to duplicate the user's legs, and also uses the back support system. With the help of this equipment, the exoskeleton allows a person to get up, sit down and walk, even if he does not have the opportunity to move independently due to insufficient strength of his own muscles. Also, the ExoHeavy system allows the user to carry additional cargo weighing up to 80 kg.

According to plans for the end of last fall, ExoMeasure and ExoLite exoskeletons were to be tested at the beginning of 2016. After testing in the conditions of the university laboratory, it was proposed to test these systems and establish their potential in the matter of rehabilitation of real patients. This stage of the tests was to be conducted on the basis of the Akvila Kursk center of functional rehabilitation. The center has experience working with people suffering from various movement disorders. The new technology developed by the SWSU should have allowed them to increase the effectiveness of the rehabilitation of patients.

At the end of last year, the developers of new systems spoke about their production capabilities. According to the head of the exoskeleton laboratory, Andrei Yatsun, the possibility of the university allows to start mass production of new systems with the release of up to ten products per year. The cost of a serial exoskeleton is estimated at 700-800 thousand rubles. A. Yatsun noted that similar systems developed by other domestic universities and planned for release at the end of 2016 of the year will cost about 1,5 million rubles. 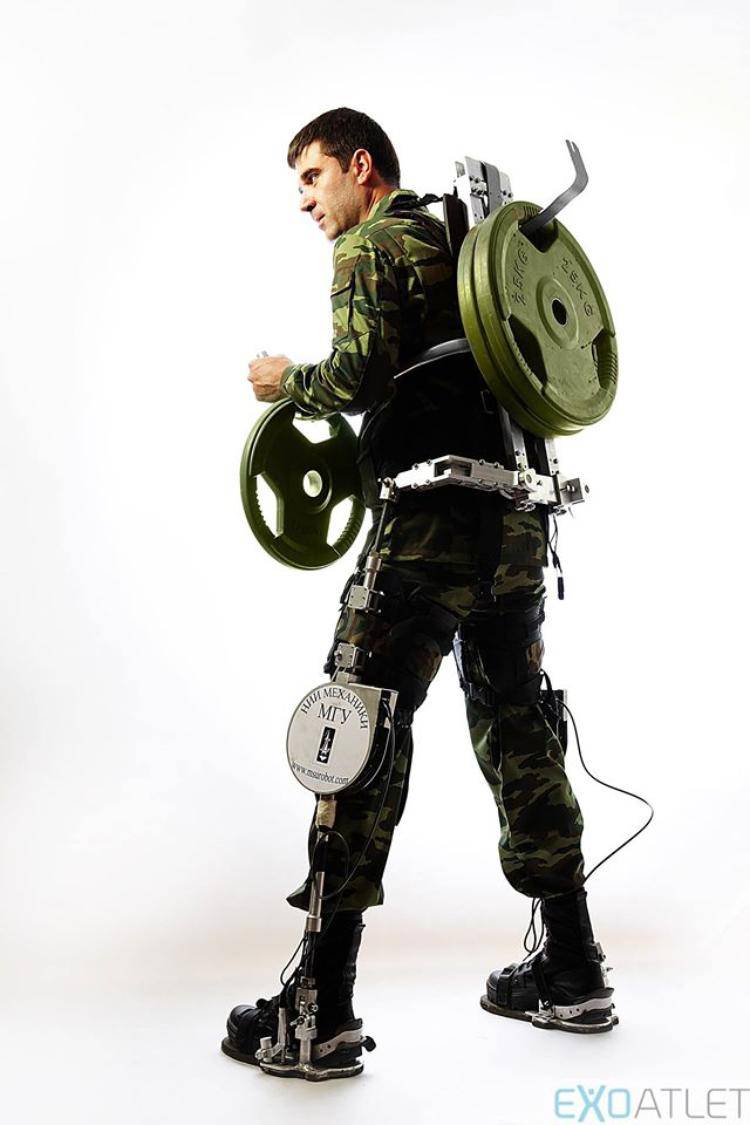 Prototypes of new exoskeletons developed by the Kursk University are used in laboratory research and testing, and in addition, they become exhibits of the exhibitions. So, in December last year, the development of the laboratory “Modern methods and robotic systems for improving the human environment” was presented at the exhibition VUZPROMEKSPO-2015. Then it was argued that the new system could literally put on its feet even the disabled of the first group.

A few days before the start of the December exhibition, representatives of the SWSU told about the upcoming signing of a contract with the Ministry of Defense, in accordance with which a new version of the exoskeleton, designed for operation by troops, will be developed. The Defense Ministry expressed a desire to provide financial support to the project. According to reports, first, by order of the Ministry of Defense, a system will be created that improves the user's physical capabilities. Such an exoskeleton can be used for transportation purposes, as well as during loading operations. In the future, the appearance of a similar system designed for use directly in hostilities and having appropriate design features is possible.

Currently, several new exoskeleton projects for various purposes are being developed in our country. For example, the first such system to enter the market could be the development of specialists from Moscow State University called ExoAtlet. The device with a total weight of 12 kg will allow the user to move around, even with disruptions in the musculoskeletal system, as well as carry the weight of 70-100 kg. A special modification of this exoskeleton, capable of being equipped with an 35-kg armored shield, has already been developed. Such a device may be of interest to the military and rescuers. ExoAtlet exoskeleton will be available for order by the end of this year.

In general, the industry is looking at the future of the existing exoskeleton projects with optimism. So, in April last year, the head of the medical equipment department of the United Instrument Making Corporation, Alexander Kulish, said that the supply of army exoskeletons, greatly increasing the strength of the fighters, can be expected in the next five years. Thus, in the very near future, the development of a new technology may begin, which may become quite widespread.

The appearance of the army exoskeleton from the SWSU is still unknown. Perhaps it will be similar to the existing development, but we should expect a big difference from them. It is known that a sample of such equipment will be shown at the beginning of September during the exhibition “Army-2016”. Nevertheless, it is possible that the "premiere" of this system will take place earlier. One way or another, the Ministry of Defense can count on the emergence of a new special technology, which allows increasing the capabilities of soldiers in the solution of various tasks.