In the period between the two world wars in all states that had their own armored forces, intelligence in the interests of these forces was entrusted to light armored cars. However, the solution of reconnaissance tasks was not at all a simple matter. So, the crew of an armored car usually consisted of 2-3 people, each of whom had their own functional duties inside the combat vehicle, so it was almost impossible to carry out intelligence activities in isolation from the armored car. The latter circumstance could reduce the entire success of intelligence activities to zero. 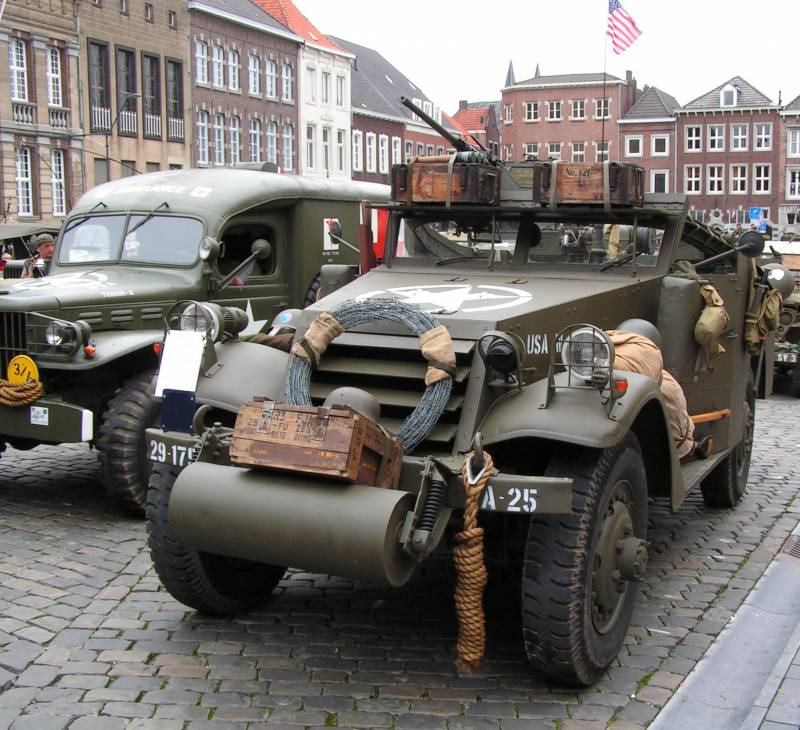 Understanding the fact that the combat vehicle should be only a means of delivery and subsequent evacuation of the reconnaissance group and, if necessary, be able to cover its withdrawal with fire, first came to the American army. The US military department made very tough requirements for such a reconnaissance vehicle, especially by the standards of the early 1930s,. In addition, the American military wanted the armored car to be an all-wheel drive. In the documentation, the armored car received the official designation Scout Car (reconnaissance vehicle), and in everyday life both then and in the future, it was often called simply “scout”, omitting the official alphanumeric index, which was adopted in the US Army.

The White Motor Company, located in Cleveland, decided to respond to the competition announced by the US military. From the very beginning of the twentieth century, this White Brothers company specialized in the production of trucks, and in 1932-1933 due to a significant drop in sales, which was caused by the consequences of the Great Depression, the company was actively looking for new partners and customers. In those years, the solvency of the American military could not cause any questions to the management of White Motor Company. Just at the same time, it swallowed Indiana, and their assets turned out to be the suitable chassis of the all-wheel drive lightweight 1,5-ton truck White-Indiana 4х4, on which was built the first prototype of the reconnaissance armored car, designated T7.

According to the results of the tests, the US military ordered the company a small batch of new armored vehicles, which received the final designation Scout Car М1. Already in 1934, the 76 of the M1 armored personnel carriers entered service with the 1 and 13 armored battalions of the American army, which were stationed in Fort Knox (Kentucky). The armored vehicles of this modification were distinguished by the presence of the Hercules L 6 cylinder carburetor engine with a liter 4,6 displacement and hp 75 power. At the same time, the armored personnel carrier was armed at once with 4 machine guns: two large-caliber 12,7-mm machine guns Browning M2, located in the front of the hull, and two 7,62-mm machine guns Browning M1919-4, located on the sides of the hull. 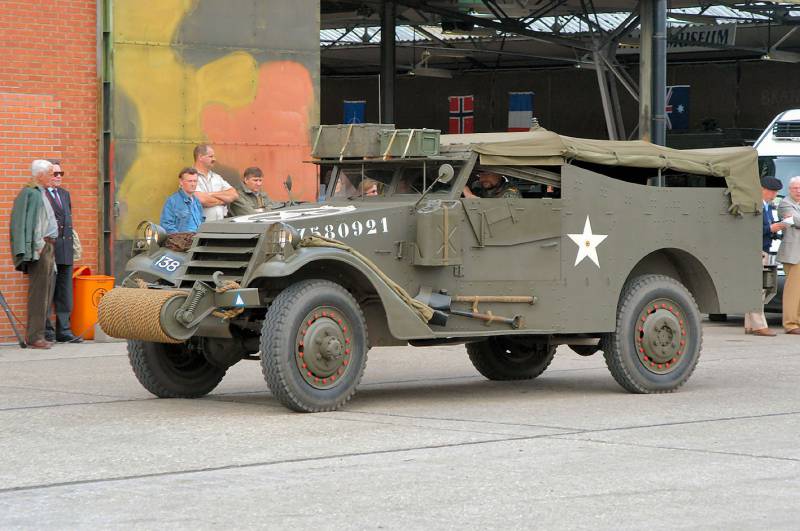 In pursuit of the White Motor Company, seeking also to receive an order from the military, competing firms also began to develop armored vehicles with similar characteristics. First, in 1935, an armored car was born, which received the military designation M2. This model, offered by another car manufacturer Corbitt & Co from North Carolina, was distinguished by the presence of an 8-cylinder Lycoming New Corbitt Eight engine, which developed a power of 95 hp, and two 7,62-mm M1919A4 machine guns, which were located on the sides of the hull. This model was quickly followed by the M2A1 modification, which already had a fundamental innovation - a rail-tire that covered the open part of the car's armored body around the perimeter. On this rail, with the help of special movable grips, machine guns could be installed and could move freely, which significantly increased the efficiency of firing compared to the installation of rotating machine guns on fixed turrets.

White Motor Company meanwhile did not sit idle. The company took into account its own experience in this field and studied the achievements of direct competitors by developing a new model, which received the designation M3. An armored personnel carrier equipped with a new six-cylinder carburetor engine Hercules JXD, developing the power of the 110 hp. The frontal armor plate of the hull, located in front of the radiator, was installed at an angle, which provided better protection, increasing the thickness of the above armor and provoking more ricochets. In 1938, the new armored personnel carrier was adopted by the American army. At the same time, the M3 version also sold out in a very modest installment - just 64 machines.

As a result, already in 1941, the final version from White Motor under the name М3А1 was sent to mass production. From its immediate predecessor, the M3, the upgraded version of the M3А1 armored personnel carrier was distinguished by a new armored corps with an elongated rear part and width. The configuration of the side doors, as well as the design of the front sheet of the hull, the door in the rear wall at the same time decided to eliminate. On the front bumper of an armored personnel carrier for the first time appeared buffer rotary drum, which became a characteristic feature of American-made armored vehicles during the Second World War. The thickness of the armor of the frontal hull of the body of the M3А1 armored personnel carrier was 12 mm, and all other sheets - 6,35 mm. In terms of assembling the M3А1 chassis, it was a typical all-wheel drive (4х4) 1940-s light truck with a transfer case, which was installed separately from the gear box and was connected to it by an intermediate shaft. 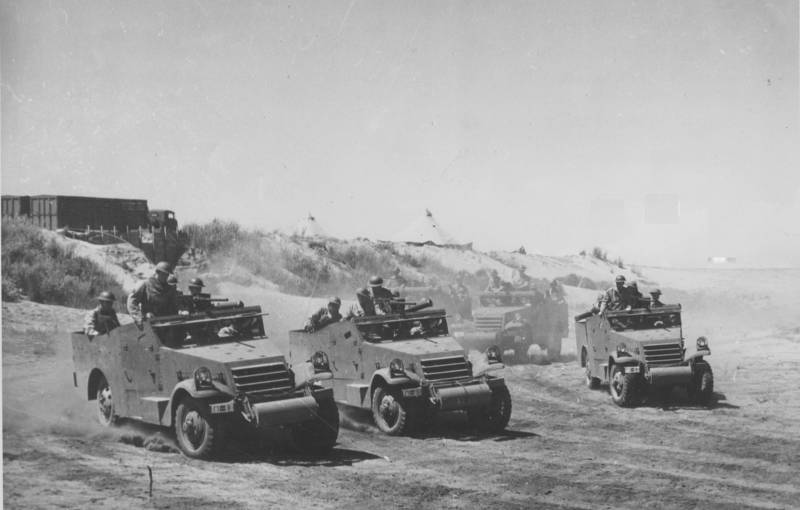 Along the perimeter of the open body of the armored personnel carrier was placed rail-tire, which was borrowed from the Corbitt МХNUMXА2 armored car. Under this system, with the help of mobile machines M1, machine guns that were part of the armored personnel carrier’s standard armament freely moved — they could be sent without much effort forward, backward, left and right, and also simply rolling along the rail. The standard armament of the M22A3 version was the large-caliber 1-mm machine gun М12,7 and the 2-mm machine gun М7,62А1919. The loaded ammunition consisted of 4 thousands of 8 caliber cartridges mm and 7,62-600 750 mm caliber cartridges. Boxes, equipped with machine-gun belts, were placed in two boxes, located on the sides of the body. Instead of a machine gun М12,7А1919, an 4-mm Browning М7,62А1917 machine gun with a water-cooled system could be installed on an armored personnel carrier. It is worth noting that in the Red Army on the machine M1 in some cases installed the legendary machine gun "Max".

It is worth noting that the Scouts have become one of the most popular and popular armored personnel carriers in the Red Army. The Soviet military used them in the same way as in the Allied forces, mainly in the role of reconnaissance or command and staff vehicles. Thus, the reconnaissance company of a tank or mechanized brigade, according to the state, had 3-4 МХNUMXА3 armored personnel carriers, the corps reconnaissance battalion already had 1-6 armored personnel carriers, and the motorcycle regiment of the army 8-13 Scouts. Perhaps their only drawback, which the Soviet soldiers identified in their reports on the combat use of vehicles, could be called an unreliable towing device, especially when towing 16-mm divisional guns ZIS-76,2 and falling dynamic performance in the event of towing such an artillery system. 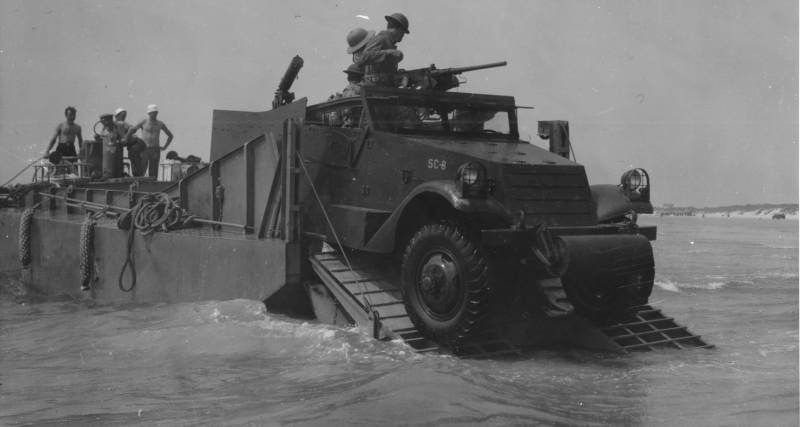 Good maneuverability, visibility and powerful weapons made it possible to effectively use the M3А1 armored personnel carriers during street battles. So, 25 on April 1945, the first to break into the eastern outskirts of the Czech city of Brno, were the reconnaissance company of Senior Lieutenant I. Matushkin from the 4 Guards Mechanized Brigade of the 2 Guards Mechanized Corps. Overcoming various obstacles, strong automatic and machine-gun fire of the Germans, they resolutely and boldly moved forward. Armored carrier M3 Scout Car Sergeant B. Bayaziev took the lead, ahead of the rest. The driver of this car noticed in time that the German artillerymen were hastily deploying the gun in order to destroy the armored personnel carrier that had broken through, but the enemies did not have time to do it. Bayaziev on time increased the speed of movement, and the machine gunner - ordinary S. Ivanov marked the queue fired from a large-caliber 12,7-mm machine gun, shot the entire calculation of the German gun. Following the scouts in Brno, the soldiers of the motorized rifle divisions from the 4 Guards Mechanized Brigade entered. 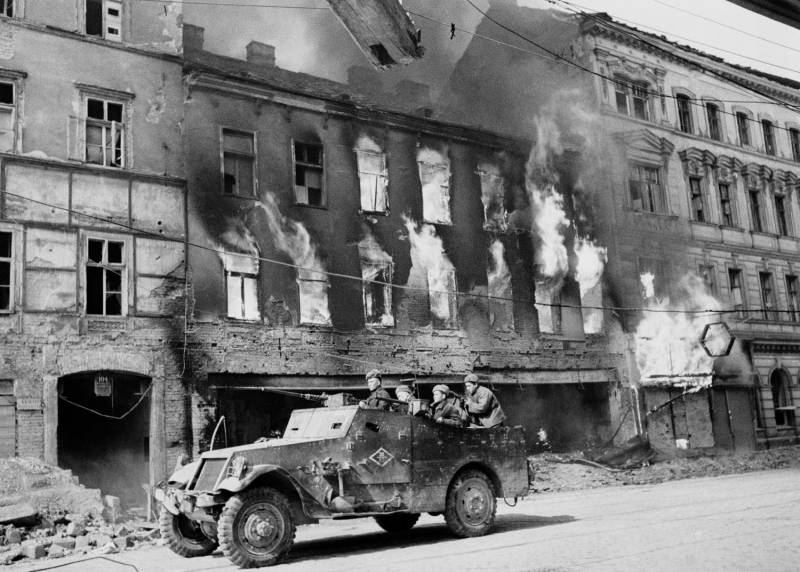