75 years "Katyusha": what is known about the famous artillery mount 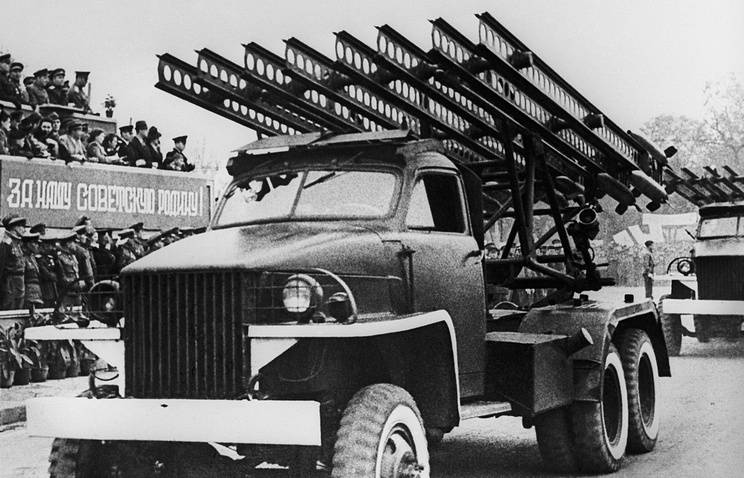 BM-13 has become one of the world's first modern salvo systems. It was intended to destroy massive masses of manpower and enemy equipment in a large area.

In August, the 1941 installation of the BM-13 received the popular nickname "Katyusha" - after the title of the same name song by Matthew Blanter to the words of Mikhail Isakovsky.
But there are other versions of the origin of the unofficial name:

One by one - this is the name of the BM-13 given by the fighters of the Flerov battery in response to the admiration of "This is a song!" one of the witnesses of the rocket launch.

According to other versions, the name was given by the K index (from the Komintern plant).

In German troops, Katyushas were usually called "Stalin's organs" because of the characteristic howl of shells, which resembled organ sound.

The birth of "Katyusha"

Work on the creation of artillery rockets in the Russian Empire in the late XIX century began Nikolai Tikhomirov. In 1921, on his initiative, the Gas-Dynamic Laboratory was established in Moscow, which was engaged in the development of combat missiles. In 1927, the laboratory was relocated to Leningrad (now St. Petersburg).

After the death of Nikolai Tikhomirov in 1930, the development of rocket weapons Boris Petropavlovsky, Vladimir Artemyev, Georgy Langemak (shot in 1938), Boris Slonimer, Ivan Kleimenov (shot in 1938), Ivan Guy and others headed the USSR.

In 1933, the Gas-Dynamic Laboratory became part of the newly formed Reactive Research Institute (RNII or NII-3, Moscow). Initially, the institute specialized in the production of aircraft-based jet rockets.

In 1937-1938 The design of a ground-based multi-charge rocket launch system began. For use on it were selected unguided high-explosive fragmentation ammunition PC-132 ("missile caliber 132 mm"), developed in RNII under the supervision of engineer Leonid Schwartz.

By March 1941 the first samples of the new rocket launcher were assembled, which in June were mounted on the base of a six-wheeled truck ZIS-6. The design bureau of the Kompressor plant (Moscow) took part in the finalization of the system, originally bearing the name MU-2 ("2 mechanized installation").

After successful tests, 21 June 1941 g. BM-13 was adopted, began the formation of the first batteries.

The composition of the "Katyusha"

On each of the rails, two PC-132 missiles were installed in pairs from above and below.

The guides of the launcher were mounted along the car, which, for stability before firing, produced jacks. When aiming at the target, it was possible to change the angle of elevation (to 45 degrees) and the azimuth of the boom from the guide.

The salvo was made from the cab of the car or by using the remote control.

Originally, BM-13 systems were installed on a ZIS-6 truck. But later for this purpose, the all-wheel drive three-axle American car Studebaker US6 (“Studebaker”), supplied by Lend-Lease in the USSR, and the Soviet truck ZIS-151 (after the war) were most often used.

The BM-13 system allowed you to carry out a volley with all charges (16 missiles) in 7-10 seconds. There were modifications with an increased number of guides and other versions of the missiles.

The first combat use of BM-13 took place on July 14 1941 during the Great Patriotic War near the railway station of Orsha (now Belarus). The battery commanded by Captain Ivan Flerov with volley fire destroyed a cluster of German military equipment at the Orsha railway junction.

At the same time, the massiveness of the volley (as a part of the battery, there was usually from 4 to 9 machines) allowed to hit enemy manpower and equipment over a large area. After the release of the missiles, the battery could be removed from the site within a minute, which made return fire difficult.

Due to the high efficiency of use and simplicity in production, by the fall of 1941, the BM-13 was widely used at the front, the systems had a significant impact on the course of hostilities. During the war, about 4 ths. Ths. Released by BM-13 were lost.

BM-13 was only one of the types of combat vehicles of rocket artillery, produced by the Soviet industry during the Great Patriotic War.
"Katyushas" called BM-8-24 systems based on self-propelled light installations tanks T-40 and T-60 (manufactured since August 1941, used rockets with a caliber of 82 mm) and BM-31 with the use of more powerful shells with a caliber of 300 mm (manufactured since 1944).

The BM-13 systems were manufactured at the Kompressor (Moscow), Uralelectromashina (Maly Istok settlement, Sverdlovsk Region, now Uralelectrotyazhmash, Yekaterinburg) and Komintern (Voronezh) plants. Discontinued in October 1946, a total of about 7 thousand units of this type were manufactured.
21 June 1991. By decree of the President of the USSR Mikhail Gorbachev for merits in creating jet weapons Nikolai Tikhomirov, Ivan Kleimenov, Georgy Langemak, Vasily Luzhin, Boris Petropavlovsky and Boris Slonimer were posthumously awarded the title Heroes of Socialist Labor.