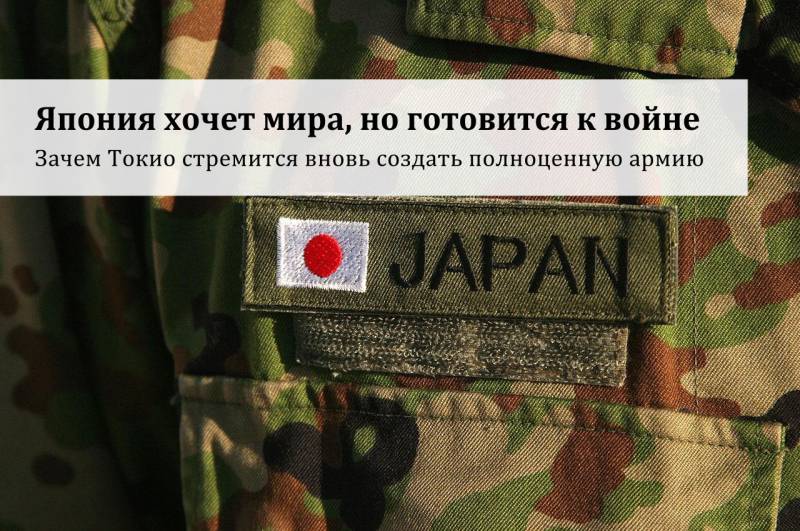 After Shinzo Abe took the post of Japanese Prime Minister for the second time in December 2012, reforms began in the country aimed at ending the ban saying that “land, naval and air forces will never be created, as well as other means of warfare ", enshrined in the 9 article of the Constitution of the year 1946. Reforms on the military "normalization" of the country are carried out against the background of increasing tensions in Sino-Japanese relations because of the rights to the Senkaku (Diaoyu) archipelago. But how are Tokyo's priorities in the area of ​​national security in reality?

From the beginning of 1950, Japan’s Yoshida doctrine (named after Prime Minister Yoshida Shigeru) laid the foundation for Japan’s foreign policy, according to which Japan had to rely on an alliance with the United States to maintain its security, keep a low profile in foreign policy and restore the economy countries by expanding foreign economic relations. At the end of the 1970s, its logical continuation was the “Fukuda doctrine”, confirming that Japan retained the status of a nonmilitary state. At the same time, the government followed the principle of sankei bunri - the separation of economics and politics.

The turning point occurred in the 1990-ies, when reproaches from Washington fell on Tokyo due to non-participation in the Gulf War and increasingly persistent recommendations to become more independent in ensuring their security. Then to this was added the economic and military growth of the PRC; Washington’s desire to see Japan as a stronger ally to deter China; the situation on the Korean Peninsula, which is periodically exacerbated in connection with the DPRK nuclear tests; foreign policy ambitions of the current Japanese leadership. All this ultimately led to Japan reconsidering the role that the country could and would like to play in the system of international relations. Military reforms proved to be an important component of this process.

The decision to reform the Japan Self-Defense Forces (ENP) was not simultaneous. At the beginning of the 21st century, ideas about the need to change those articles of the Constitution that restrict the country to having a full-fledged army began to sound louder at the highest political level.

With the beginning of the second term in 2013, Abe reiterated his intention to expand the authority of the NSC, and in September 2015 signed a decree changing the interpretation of the Constitution’s article 9, which allowed them to apply weapon only with an immediate threat to national security or attack. The new law, depending on its interpretation in any particular situation, allows the Self-Defense Forces to participate in military operations abroad, including coming to the aid of the US armed forces, even if there is no direct threat to Japan’s national security.

This state of affairs created the conditions when the existence of the BSS in its current status contradicts the ban imposed on maintaining the army after the Second World War. If the basis for self-defense is an attack on a country, then participation in military operations abroad, not directly related to the interests of Japan, is no longer self-defense. This circumstance prepares the ground for further transformations: in February 2016, Shinzo Abe proposed to amend the article of the Constitution itself, in which the country refuses war as the sovereign right of the nation.

For a more rapid and effective response to crisis situations in 2013, the National Security Council was created - a center for gathering information in the field of security and forming basic directions in the field of foreign and security policy. Its headquarters is located at the disposal of the Cabinet Office, and the prime minister is the chairman.

What situation does the Japanese government consider potentially crisis?

In the White Books of Japan’s self-defense of the premiership of Abe, among the factors destabilizing the situation in the region is North Korea’s nuclear program and the increase in Russia's military activity. Selected points are devoted to territorial disputes in the South China Sea, cyber security and international terrorism.

Significant attention is paid to the “transformation of China into a maritime power”, “trying to undermine the control” of the states over the islands (the rights to which he claims) in the East China and South China Seas (VKM and SCM). The Japanese government is worried about the establishment of an identification air defense zone in the East China Sea, covering the Senkaku archipelago (Kit. Diaoyu), as well as the emergence of Chinese reconnaissance aircraft in the airspace of Okinawa and Miyakojima and cruising ships of the PRC Navy near disputed islands.

The Books say that the role of Japan’s defense capabilities is constantly growing in response to challenges in the region. The military budget, adopted in December 2015, among the functions that the NSC must perform, indicates the need for effective deterrence and response to security challenges, including the so-called “remote islands” (apparently, this is Sankaku). But does the military "normalization" of Japan exclusively anti-Chinese?

The reforms of the Abe Cabinet, eliminating the restrictions imposed on Japan after World War II, are directed not only and not so much against strengthening the Chinese military presence in the Senkaku region.

First, Sino-Japanese relations are an important factor in ensuring peace and stability in the APR (Tokyo cannot but be aware of this). And, despite the expression of concern about the strengthening of China’s military activities in the VKM and YUKM, Japan will maintain mutually beneficial economic relations with it.

Strengthening Japan’s military presence in the Senkaku area is a natural reaction to Beijing’s territorial claims. In fact, the archipelago, and so is controlled by Tokyo. But since China is trying to demonstrate its control over the islands, the Japanese government is forced to respond by building up its military power. At the same time, Japan refrains from steps that could provoke a collision.

Secondly, the provisions of the White Books of Self-Defense, the National Defense Program, the 2013 National Security Strategies of the Year indicate the response of the military reforms and policies of Japan. He responded not only to the strengthening of China’s military-political influence in the region, but also to the DPRK’s nuclear program, Russia's military presence in the Pacific, and the intensification of international terrorism in the Middle East and North Africa.

After the DPRK nuclear test of 6 in January and the launch of the 7 satellite in February of 2016, Pyongyang’s actions in Tokyo are of greater concern than the visits of Chinese warships to the Senkaku area. For example, on March 15, the Patriot PAC-18 anti-aircraft missile systems were deployed on an ongoing basis on March 15 in Tokyo on the territory of the defense department in case of new launches of DPRK missiles that pose a direct threat to Japan.

Third, maintaining certain tensions with China over the islands is in its own way beneficial to the Japanese government. The Democratic Party of Japan (DPJ), which was in power in the period from 2009 to 2012, focused on internal political issues. And it was during the DPJ that three territorial disputes of Japan escalated at once: President Medvedev visited the Kuril Islands for the first time, the Chinese fishing trawler and two Japanese coast guard ships collided with the disputed islands, and the Republic of Korea Lee Myung-bak paid a visit to the Takeshima Islands (Tokdo) .

Having come to power at the end of 2012, the Liberal Democratic Party began to pay more attention to relations with its neighbors and strengthen the component of military construction. His goal is to demonstrate not only the Chinese political establishment, but also his own citizens the firm intention to assert their rights to Senkaku.

Fourth, take into account the position of the United States. Since Sankaku falls under the obligations of the US-Japan agreement on mutual cooperation and security, maintaining friction in relations between Beijing and Tokyo, which do not turn into open conflict, is beneficial to Washington: it strengthens the anti-Chinese orientation of the American-Japanese alliance.

Fifth, it is important to understand that increasing arms exports is a source of profit for Japanese corporations. In this regard, there is an increase in military-technical cooperation with ASEAN countries and the Japanese side’s aspiration at such sites as ASEAN + 3 to raise the problem of China’s building artificial islands.

It is also worth noting Tokyo’s claims on the status of a permanent member of the UN Security Council and how this is related to the change in the status of the Self-Defense Forces, whose activities in UN peacekeeping missions and anti-piracy campaigns were previously limited. Increasing the mobility of the NSR and simplifying the procedure for approving their use abroad allows Japan to more actively participate in peacekeeping operations, strengthening the country's prestige in the international arena.

Finally, the pace of military reform in Japan is constrained by the potential of its economy: 5 periods of recessions from 6 occurred during the period of “abenomics”. And although the current military budget of the country has become the largest in the post-war period. history, having reached 41,4 billion dollars, there is no way to speak of its rapid increase: in 2014, the increase in army spending was 2,2% compared to the previous year, whereas in 2016, only 1,5%.

Thus, the military reforms in Japan are caused not so much by concerns about the growing military activity of the PRC in the area of ​​the disputed islands, but rather by the international situation in general and the ambitions of the Japanese leadership. And this path is a reflection of the evolution of Tokyo’s approach to shaping foreign policy in the context of global political and economic changes.