US ambassador: Washington will send 5 thousand troops to Eastern Europe

22 2016 June
35
"The Pentagon will transfer to the eastern frontiers of NATO a motorized brigade numbering about 5-thousand people, reports RIA News Statement by the US Ambassador to Warsaw Paul Jones. 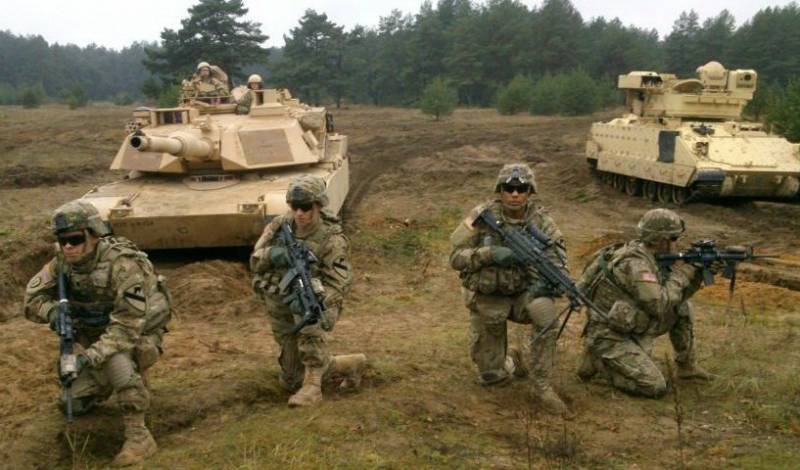 “We know that individual NATO countries will take part in the creation of battalions in the Baltic countries and Poland as part of the advanced forces, but specific information about how many military men and what configuration each country will allocate will be known during the summit (NATO in Warsaw) . As for the US bilateral commitments on the Eastern flank issue, we know that a motorized brigade of about 5 thousand US troops will be deployed in this area, but we are not yet ready to announce exactly what it will look like. ”
reported jones.

According to him, the US military will begin to arrive in January 2017 th. Fully team should be deployed in February. Other NATO countries will begin sending their units around the same time.

“I am ready to confirm that the United States will be one of the responsible countries. Details of the configuration on the territory of the Baltic countries and Poland have not yet been finally established and not announced. But I think that the overall US contribution to ensuring the security of the eastern flank of NATO will be very significant, including significant for Poland, ”the diplomat added.

Meanwhile, Lithuania called the forces of the alliance, which are supposed to be placed in the Baltic States, symbolic and not intended for offensive operations.

“NATO is not some attacking organization: it must guarantee the security of its members. We are part of the territory of NATO, and it is not divided into some specific segments, they all must defend themselves by the same standards, ”he quotes. Kommersant Lithuanian Foreign Minister Linas Linkyavichus.

“In addition, the battalion is about a thousand troops. Even non-specialists understand: the fact that the armed forces are concentrated in the Baltic countries is out of the question. I’m not going to compare the numbers, how many troops, weapons, tanks and airplanes are located in the Kaliningrad region, - there is no need for this, no one is competing here, ”he said.

“This is a symbolic number of servicemen, it’s even funny to speak about it in general professionally. Noise can be raised a lot, but it is obvious that NATO simply seriously and objectively ensures security (of the participating countries) is not to attack someone, since NATO will not be engaged in this, ”said Linkyavichus.

“Looking around, on the precedents of violation of the territorial integrity of other states that are not part of the alliance, hearing some statements, I personally, as a former defense minister, and as head of the foreign ministry do not doubt NATO’s security guarantees. Since I know that the alliance takes this very seriously. But ordinary people feel uneasy, ”the diplomat said, adding that Lithuanian citizens“ are afraid of aggression from Russia. ”

“Therefore, even the symbolic physical presence of this battalion creates a sense of security. By the way, the military are not even deployed on a permanent basis: they come for exercise and leave again, ”he said.

The minister also added that he personally is “not inclined against Russia, the Russian language or Russians.”