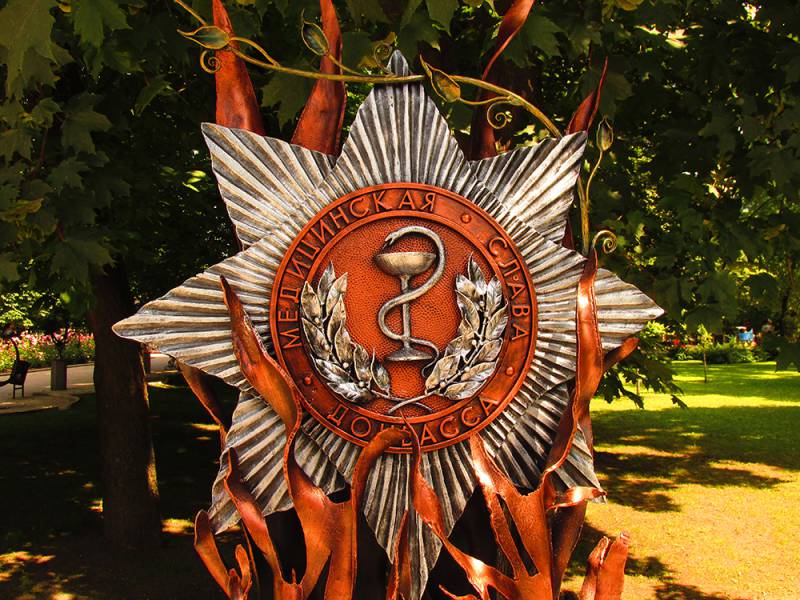 During the fighting, doctors, nurses and other medical workers often require no less heroism than soldiers. We have to rescue the wounded from the shelling, to work without breaks and weekends, in conditions where there are not enough bandages and medicines. In addition, it happens that there is a need to perform another heavy duty - to assist the wounded enemy.

So it was during the Great Patriotic War, which began 75 years ago, and now in the Donbas - in the people's Republics, whose inhabitants have to defend their land from the Ukrainian aggressors.

About the exploits of the doctors of Donbass in the current war, folk songs are born. Here is one of them, the most famous, written on behalf of the repentant Ukrainian punisher:

Mom, I'm a prisoner, but you don't cry.
Darned, now as new.
I was treated by a Donetsk doctor
Tired, strict and stern.

Treated me. Do you hear, mom:
I beat the city from Gradov,
And half the hospital just in the trash,
But he treated me: "So it is necessary" ...

This song was not born from scratch. One of the Ukrainian “cyborgs”, Stas Stovban, was wounded near Donetsk airport. Doctors DNR saved his life, although I had to amputate his leg, crushed by a stove. At the same time, the cyborg repented. In his interview, he said that he was not willing to go to war in the Donbass.

True, then everything did not work out according to the song: the “repentant” punisher was released, and he again took over weapon and went to kill. Ukrainian press called him a "hero."

Such "heroes" fired, including medical facilities. Hospital №21 Donetsk, located not far from the airport - fully experienced the dubious "heroism" of ukrokaratels - it was beaten repeatedly. In Kirovsky district, Polyclinic No. XXUMX, now restored by the authorities of the Republic, suffered from the hands of the enemy. The shelling was at the beginning of February 27, then one person died and three were injured.

But hospitals can be repaired, but the lives of the dead cannot be returned. Only in the first days of the shelling of Donetsk in May 2014, the Kiev junta fighters killed six physicians who assisted the wounded under the airport.

In July, a brigade of five paramedics who were trying to rescue a wounded man in the Marinovka area hit the Ukrainian punishers 2014 of the year. Fortunately, they managed to rescue, but they were subjected to beatings and humiliation (including women).

Not far from my house there is a self-made memorial tablet installed in memory of the ambulance driver Vitaly Kalnobritsky. He died in a shelling in February 2015, fulfilling his professional duty. 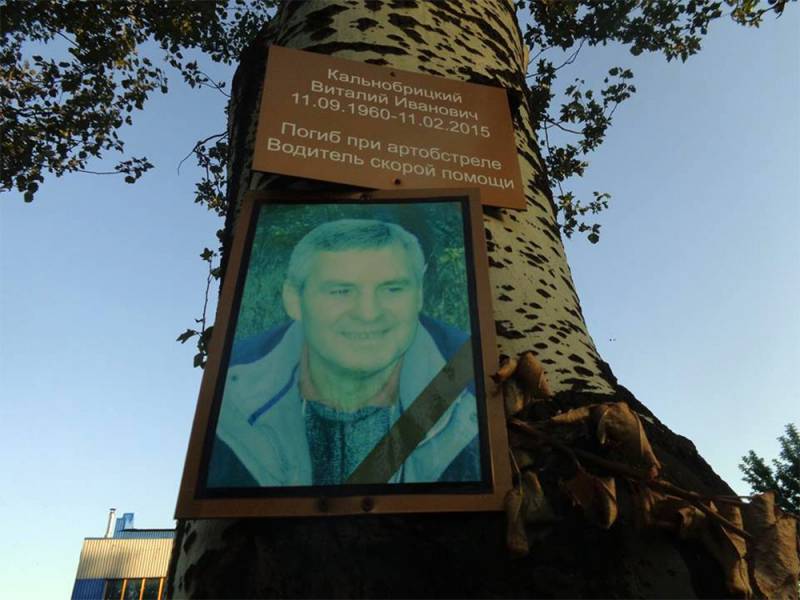 The third Sunday of June is a professional holiday for medical workers. In Donetsk, on the eve of the Day of the Medical Worker, a sculpture was set up in the Forged Figures Park. “Medical Glory of Donbass” is the name of this composition, dedicated to both the fallen and the living ... Those who honestly do their holy work, saving people. 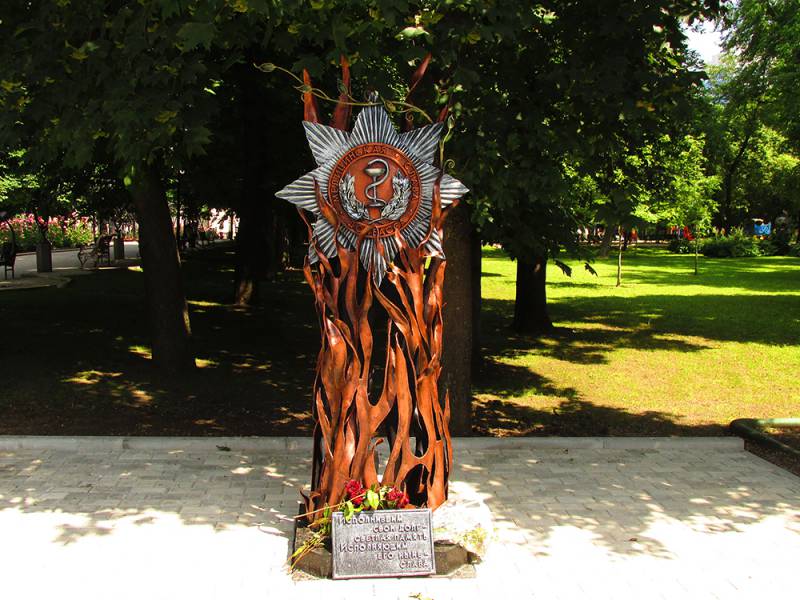 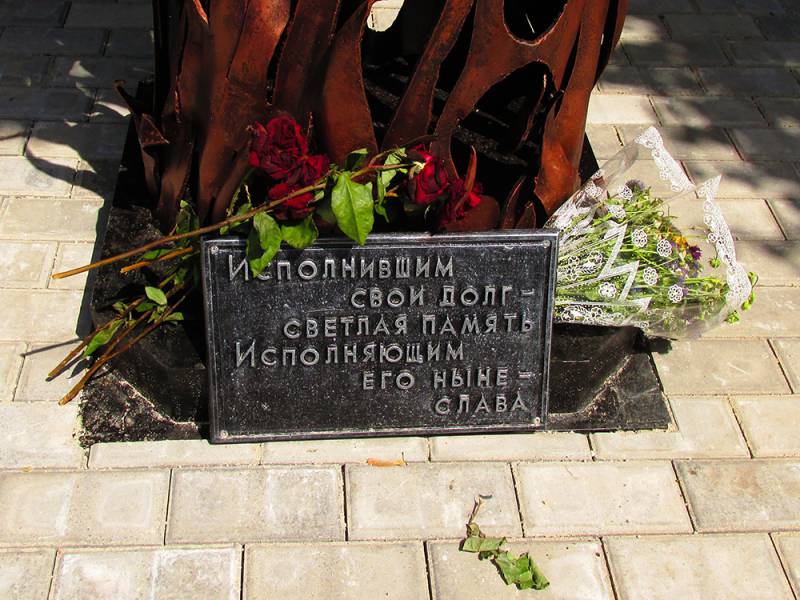 Unfortunately, there are other "doctors." Those for whom professional duty and the Hippocratic Oath are nothing. Phenomena like Maidan are terrible also because they mercilessly disfigure the souls of people, forcing them to forget not only what is holy, but also about the elementary concepts of humanity.

So, on the Ukrainian television channel Ukrlife there appeared an interview with the “doctor” from Enakievo Alexander Chernov. This person, if I may say so, is a supporter of Maidan and supports the current Ukrainian usurping power.

He opened his heart and said that in 2014, he contributed to the death of the wounded militiamen who fell into his hands.

Instead of helping the sick, he simply “healed” them.

Chernov said that the most important thing for him was to preserve his own safety, so he did not refuse to treat the wounded. But when there was such an opportunity - I did everything to ensure that the patient went to another world.

“If you wish, a person can be killed with medicines so imperceptibly that it will look either as a heart attack, or as a stroke, or it is not at all clear what to say,” the “doctor” shared his memories. His goal was to "cause maximum harm to the enemy."

“Many of my colleagues, unfortunately, believe that the doctor is out of politics. But I convince everyone that the Hippocratic Oath is not an indulgence from responsibility for aiding the enemy, ”says one who was obliged to save human lives to a million people.

When Chernov refused to treat a wounded woman from Kramatorsk on the grounds that she was the wife of one of the opponents of Maidan, the militia took him prisoner and sent him to dig trenches. But he categorically did not like such an activity, and he offered his services to a resuscitator. But how did he do his work? He did not hesitate to talk about it on television, hoping that Ukraine, ill with the Maidan, would consider him a hero for such “feats” ...

The Human Rights Commissioner of the DPR, Daria Morozova, called for the prosecution of a false doctor. Only this appeal is unlikely to be heard. Because the current Ukrainian government is ready not only to justify frank crimes, but even to reward them ...

The notorious gunner and punisher Nadezhda Savchenko was declared the “people's heroine”. 17 June, by the way, was exactly two years since the death of Russian journalists, Igor Korneluk and Anton Voloshin, near Lugansk. They were killed with the participation of this “heroine”, whose crimes went unpunished. Therefore, to rely on the fact that the Ukrainian government will punish Alexander Chernov - the killer in a white coat - is also not necessary.

From the interview with the killer doctor